Stunning Shigaraki Tomura Cosplays Every MHA Fan Should Check Out

There might be some spoilers for you along the way. But I bet you would regret if you back out now. Amazing cosplays will be missed out!! 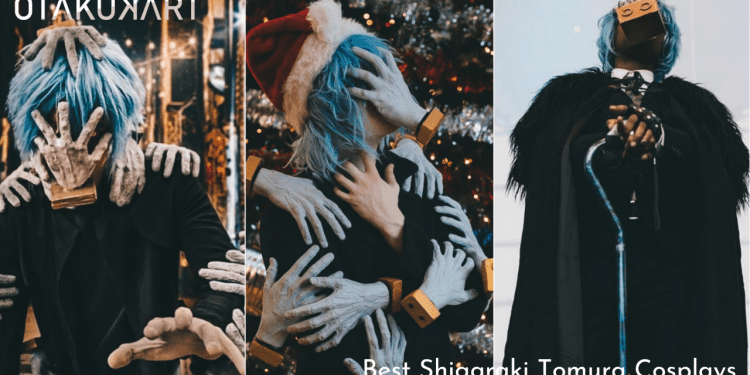 All Shigaraki fans, grab your heart as we will explore some of the most stunning Shigaraki cosplays, which even you may want to try. We are all well versed with cosplays, and how this emerging subculture brings new experiences to our lives. Are you a cosplayer? Are you one of BNHA fans? Are you in love with Shigaraki Tomura? I mean, do you like Shigaraki’s costume, and maybe his way of living? No matter what you like, if you want to gain some knowledge about how to cosplay Shigaraki Tomura, then come and let’s dive into the reading.

Before going through the cosplay part, let’s once again go through how BNHA’s most-wanted villain has come up all these times. Boku no Hero Academia, written and illustrated by Kohei Horikoshi, is a Japanese manga-based anime that is produced by Toho and Bones. The story follows a ‘quirkless’ boy who dreams of becoming a hero, just like his idol All Might. As he encounters several road bumps in his journey to help others, there is one who is constantly targeting Izuku. Shigaraki is the main antagonist of MHA. He plans and tries to destroy the hero society, which he loathes.

Shigaraki’s real name is Tenko Shimura, great-grandson of Nana Shimura the 7th holder of One For All. he hates the hero society, which many look up to. As his quirk is ‘Decay,’ he can turn everything into dust within seconds, upon touching his target. Shigaraki brings up much trouble for the hero class of the U.A. academy, as Midoriya and his class suffer the most.

(Read this if you want spoilers – Shigaraki was the leader of the League of Villains. Now he is the Great Commander of Paranormal Liberation Army, having hundreds of so-called followers under him. He has now acquired All For One and has also gained Gigantomachia’s loyalty.)

Though an antagonist, Shigaraki has lived quite a sad childhood. His father beat him up for Tenko wanted to be a hero, just like All Might. Tenko, a five-year-old boy, manifested his quirk decay, and unknowingly killed all his family members. Ever since then, he had an urge to destroy things, instead of building any!

Before any further delay, let’s get you acquainted with some of the most stunning and mind-blowing Shigaraki Tomura cosplays.

One of the famous cosplayers, @f.ukuro, has been able to pull off an innocent Shigaraki. Well, innocent or not, Shigaraki is Shigaraki and no one can deny that. Shigaraki fans would drool over if he was this cute and still did all the bad things there is to in the world!

Remember when Shigaraki caught Deku off guard in a crowd? It was in episode 25 of the second season. This picture matches the scene well, no? Though Shigaraki never told him to not move, he did say any and many of the lines which ultimately meant ‘don’t move.’

Even though he is supposed to look dangerous in here, somehow the thought of Shigaraki saying ‘don’t move’ is just too cool. Don’t you agree?

Rule over the World

No matter how villainous a villain might be, they are still lonely humans. That was just a real-life example to consider. Now relate the same with the anime, MHA.

Fans are already aware of Shigaraki’s past; his family background, his dreams, his conditions, his everything. Shigaraki always wanted to destroy everything, has he not? He, in the past, dreamt of becoming a hero, but could not. However, ever since then, he has changed! In the above picture, @virgyl._bocci has been able to bring out Shigaraki’s loneliness to us!

BNHA fans are already aware of Shigaraki’s quirk- Decay. He can turn everything into dust when comes in contact with the object or target. Though this quirk has limitations of its own, it is a great quirk to acquire.

In the later chapters of MHA manga, it is seen that Shigaraki is now able to turn his target into dust without even touching his target directly. The target on who he wants to use his quirk if is connected with others, then they will decay too.

Compare both the Shigaraki’s. Do you find anything different in any of them? One looks old while the other is young, no? As baseless as it may sound, now try comparing their appearances. On the left side, Shigaraki has a hand while the other doesn’t. Even their facial condition is comparable. The right side Shigaraki, or should it be Tenko, has a clear face and does not look too evil yet. But the left one seems drunk in his dream, of destroying everything!

Despite that, @mithosuu has been able to pull that off, and showed us some stunning cosplay ideas, with great concepts.

Shigaraki is out there to destroy everything. He does not care about why and how, but destroying brings him joy. A picture depicting his need and desire so well is hard to find. Wonder if that’s what he truly desires?

Shigaraki, no matter what, is lonely! He does have his League of Villains and his master, All For One, but he sure misses his family to some extent. In the later chapters, fans will get to know his reaction while reliving his memories of his family. Even Deku can tell that inside him, there is a child, crying and begging for help.

Shigaraki is out there to satisfy his killing desires. While he was young, he wanted to become a hero and protect everyone. But his traumatic childhood left him with uneasy feelings which now bothers him to the point that he has taken a liking to kill people just for fun!

So that’s how it is

Shigaraki likes it when things go wrong. Not his plans, but when his opponents mess things up, or when he is satisfied to the point that he laughs it off.

It is rare for fans to see him smile, but if he does smile someday, then this picture of @mithosuu is just the perfect sample!

Do I miss them?

Shigaraki had amnesia after he killed all of his family members. He was unable to remember his family, nor did he try harder. He just lived with the uneasy feeling, the suffocation he suffered all his life, until his awakening in the Meta Liberation Battle.

Whether he misses his family or not is near to impossible to identify. But the way he sometimes reacts to his memories is hard to imagine he doesn’t.

What a view! Only if there were scenes like this in BNHA as well. Thinking Shigaraki enjoy Christmas and other events with everyone from MHA is just a feast to imagine! We can imagine such images thanks to @tawko_cosplay.

Is Shigaraki missing his family, on this occasion? Why is he alone? Is he waiting for other League of Villains to come? Is he still under All For One’s control? When will he be set free? Does he need any kind of help? Aren’t you getting curious with questions such as these?

A Santa Shigaraki and lonely? That’s not done. Still, he looks dashing, doesn’t he? @tawko-cosplay has pulled off this hard to imagine picture and has passed exceeded fans’ expectations.

@claudemonae did a great and stunning job in pulling this off.

At the end of everything, what is going to happen to Shigaraki? Have any of you ever thought of that? Will Shigaraki finally be defeated? Will he be saved? Will he change? Will he ever take the hands of any heroes who are still willing to help him? Is he going to make the same mistake twice? Will All For One have him by the grasp all the time?

With a single picture, fans, even non-fans, can depict so many conditions there is to about that person, no? Don’t you feel the same? Can you not empathize with Shigaraki’s condition? Then do think about it again. Because ‘not all villains are in-born villains.’

Also Read: Is Shigaraki Tomura nerfed by America’s No. 1 Hero in MHA? Is All For One defeated in BNHA?