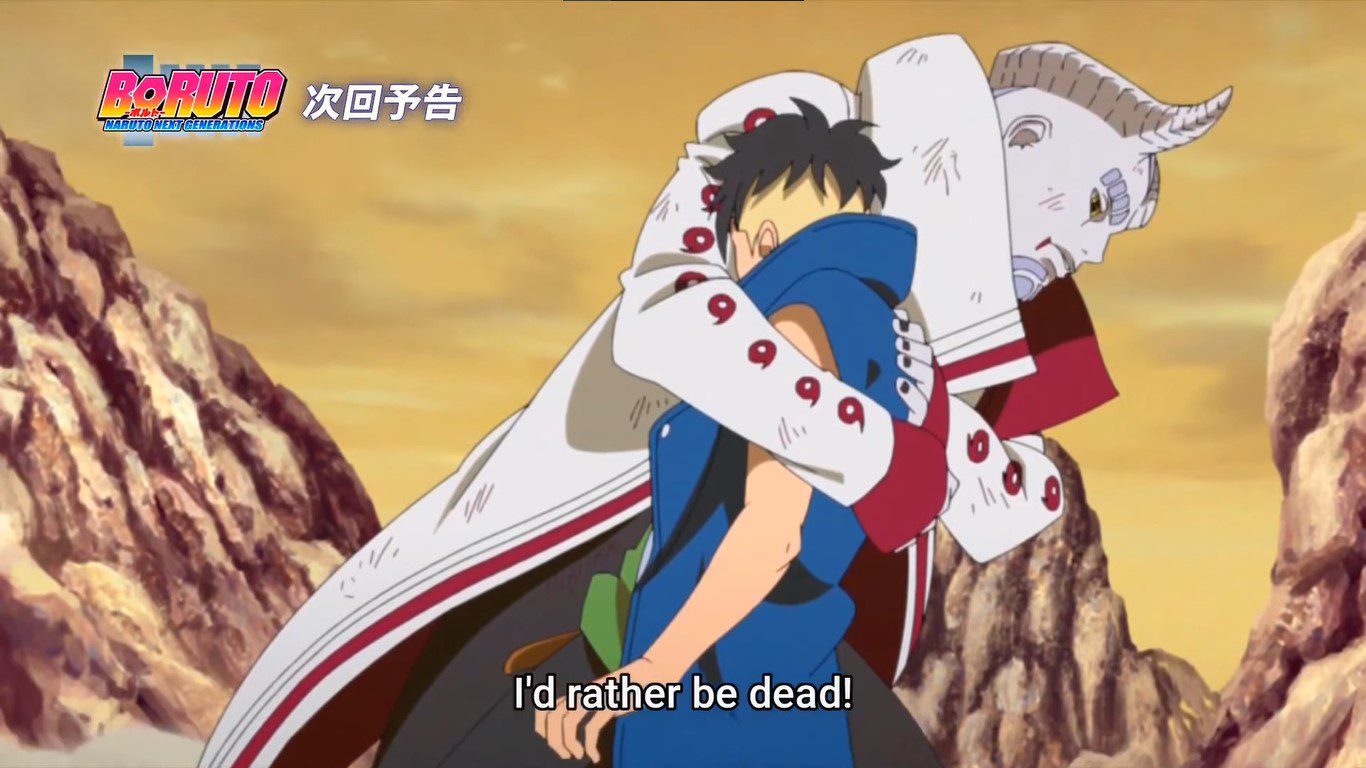 Boruto Anime October schedule will continue as usual with no apparent episode delays for the month. And with Kawaki’s arc at its end, we expect things to settle down a bit for October. Boruto episodes for September saw the direct confrontation between Ishikki and the leaf forces as Naruto and Sasuke stepped out to stop him. Kawaki also seems to have lost his Karma, proving Amado’s theory true. And the point of the ongoing battle is so that Ishiki, who has resurrected through Jigen, will brand Kawaki with a new Karma before he runs out of life.

Then, later on, we would see the showdown as Naruto and Sasuke try to get rid of Ishikki, who is running out of time. At the moment, their battle still continues, and Ishiki’s overwhelming strengths forced Naruto and Kurama to make harsh sacrifices as it is already guaranteed that one of them will die at the end of this battle. The last episode of September finally brought just towards a conclusion to this fight that has swayed favors over and over again. One moment Ishiki was easily dealing with both Naruto and Sasuke the next, Naruto is winning, and now it looks like things are going in Ishiki’s favor.

Boruto: Naruto Next Generations will release the first episode of October this weekend that will finally see the last of Ishiki and how the leaf will deal with the aftermath of the destruction he has caused. 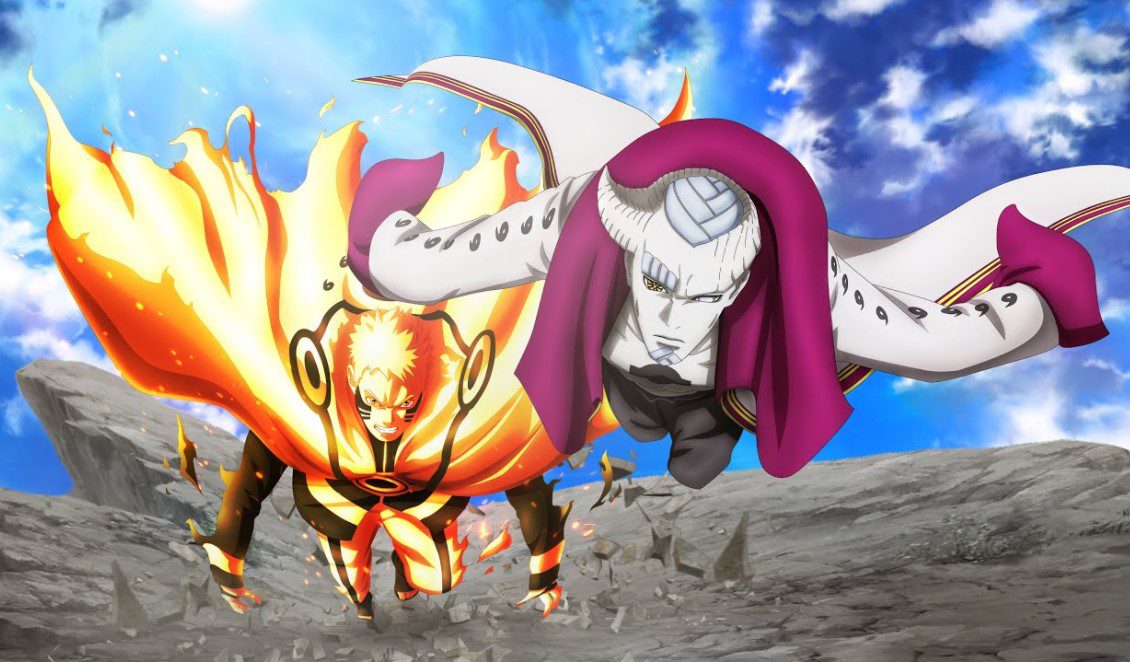 The first episode of the month will be broadcasted over the weekend, marking the first of five episodes for the month. For October, we will have five Sundays, so it is one of those months that we will get the maximum numbers of episodes we can get in a month. Unlike the manga, the anime runs on a weekly schedule, and rarely does it go on any breaks, so there is an upside to following the anime episodes. Boruto Anime October schedule will be as follows:

Things will remain like this for Boruto Anime October schedule unless something really unusual interrupts the anime broadcast schedule. It is one of the rare cases, though, so it probably won’t be happening. But just in case it does, we will be updating the anime schedule accordingly.

From the preview of the Boruto episode 218, it looks like things will be settling down, and the official synopsis of the episode, Naruto appears to be exhausted from fighting Ishiki. All of a sudden, Boruto attacks Sasuke. It appears that Momoshiki has taken control of Boruto’s weakened body and appears as their enemy.

Kawaki calls on Boruto to get hold of himself, but this does not help at all. Sasuke devises a strategy to have Boruto regain control of his body. Kawaki will have to rely on Ninjutsu he has learned thus far to save Boruto.

In the meantime, Naruto looks from a distance as Kawaki and Sasuke put their lives on the line. Deep within his consciousness, Naruto and Kurama talk to each other, thinking back about their days together.

More details on the episode to come will be revealed at the end of each episode as we get a sneak peek of what follows after each episode.

This weekend will mark the first episode of October for Boruto anime. So we already have all of September’s episodes released. So September covered Boruto episode 214 through to episode 217, which is the latest episode at the moment. This covered events from when Koji confronted Jigen while Amado escaped. This marked the beginning of the final showdown between Jigen and the leaf. We managed to see Koji finally reveal his true purpose as he explains to Jigen of his plan with Amado.

Later on, Jigen revealed that Koji is Jiraiya’s biological clone. We would expect that he found out through Amado’s research data as he closely tracked everything that Amado did. Then this was followed by an intense fight as Koji pushed Jigen’s body beyond what it could handle, forcing Ishiki to fully resurrect through Jigen.

This was all according to plan, and it ultimately got rid of Kawaki’s Karma. With Amado’s plans to seek safety in the leaf successful, Ishiki, who had fully resurrected through Jigen’s body and almost killed Koji, attacked the leaf looking for Konoha. Naruto planned to face him in the leaf as everyone had evacuated. But Sasuke and Boruto had a better plan which used Boruto’s Karma to take Ishiki to another dimension while Sasuke and Naruto track Boruto’s location through his chakra.

So this will be the beginning of the final fight against Ishiki, who easily handled Naruto and Sasuke. The fight did not last that long, a testament to Ishiki’s overwhelming powers that easily knocked down Sasuke and Naruto. With their death seemingly imminent, Kurama revealed that he still has an ace up his sleeve that would come at the cost of either his or Naruto’s life. Since Naruto was going to die if nothing happened, there was no room for hesitation. 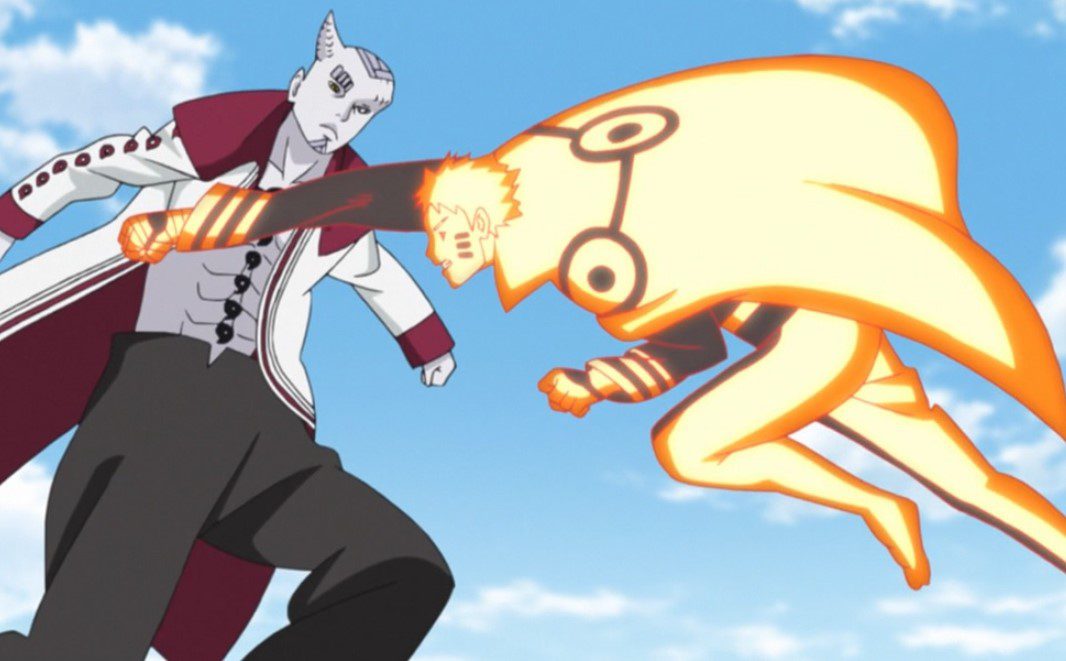 Kurama told Naruto of a new move that would have him die once he used it. At least that’s what Kurama said when telling Naruto, so he wanted him to be sure of the outcome. Quickly guiding Naruto through the best way to use Baryon mode, it did not take long for Naruto to beat Ishiki to a pulp. But as a last resort, Ishiki used the chance he had when Baryon mode was wearing off of Naruto to track Kawaki with Naruto’s chakra so he could finally brand him with a new Karma.

At this point, Ishiki was only left with a life span of five minutes, thanks to Naruto’s Baryon mode. Together with Sasuke’s tactics, Kawaki managed to buy more than enough time until Ishiki’s life ran out. But before that could happen, Ishiki used Kawaki’s care for Naruto to lure him out. He shouted that if Kawaki stayed hidden, then he would kill Naruto, forcing Kawaki to come out at the last moment sparing Naruto’s life.

This was as far as September took us in the anime. But since we already know that the anime is only tracing events from the manga, then we should already have an idea of what will be coming next based on the corresponding manga chapters. The synopsis of the next episode has been officially released so at least those who only follow the manga know that we will be looking towards what happens after Ishiki is defeated.

Boruto: Naruto Next Generations anime releases new episodes online on Crunchyroll, Funimation, or AnimeLab. The streaming details differ per region, and this is the same with the anime’s broadcast times. For regions in the US, the anime is available on Hulu and features even Subbed and Dubbed episodes.

But at the moment, the dubbed episodes are not receiving as much production and are usually way behind in the story, so it would be best to stick with the subbed episodes for the latest storylines. For Asian territories, the anime is available on iQIYI, Rakuten, VRV and even YouTube shows in a number of selected regions.

The schedule will still continue as usual, and if you prefer to watch Boruto Anime online for free, you can catch in on Crunchyroll, and the latest episodes are only delayed by seven days. So for something that comes only at the expense of watching ads, then it is a reasonable offer.