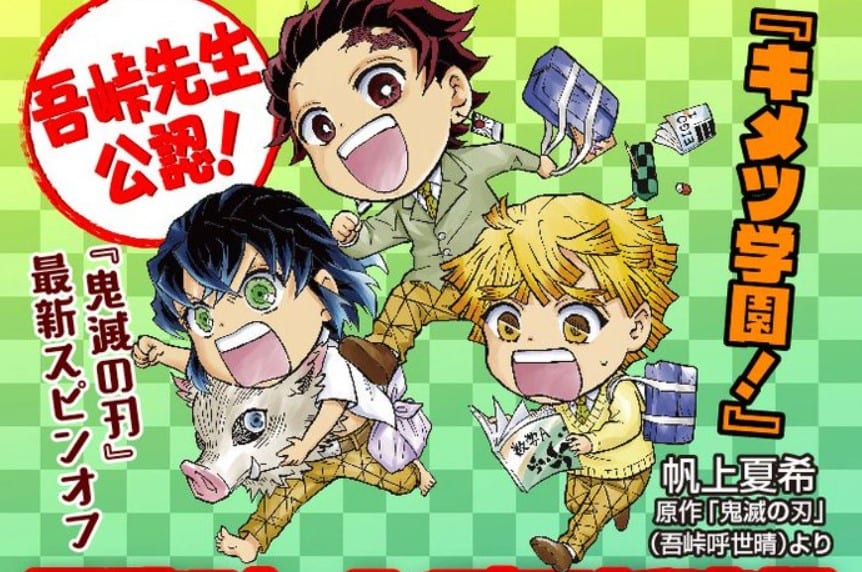 Demon Slayer Spinoff manga is confirmed to be in the works just when fans were excited with the new season of the anime confirmed. This year will see the adaptation of Demon Slayer, Kimetsu no Yaiba entertainment district arc of the manga. So far, the latest update on that end reveals that there will be a special announcement on June 13 about the upcoming anime adaptation.

To get full details on the news, you can read Demon Slayer Season 2 special announcement. The spinoff was confirmed on issue #31 of WSJ magazine and revealed last week that the Demon Slayer Stories of Water (Kimetsu Gakuen) would be getting a spinoff manga.

The official website for Saikyo Jump magazine also posted an announcement confirming the news. Other news sites like Crunchyroll and Animenews network also followed suit and shared the news, and now the manga spinoff was confirmed. The manga will be serialized in the Saikyo Jump, and apparently, it will feature a monthly schedule. More details about the announcement included a teaser image with more details to be revealed in due course.

Hell Warden Kaguma Creator Natsuki Hokami will also be on the production team, and his works prior to this had the following synopsis:

Natsuki’s manga follows the story of Huguma Kagarite, a high school student whose family has been charged by the king of hell, Enma, and they act as his hell wardens. Their duties, amongst many others, include returning escaped evil souls back to hell, but Kagarite uses his hell warden abilities to save innocent humans. He meets Ayako, a girl from his school who keeps on stealing things, but she can’t remember why. Meanwhile, Ayako’s brother has also recently become abusive towards her and her family. Higuma resolves to save Ayako and her brother and to send the demons possessing them back to hell.

Demon Slayer Kimetsu Gakuen will be released in September 2021. The manga spinoff is expected to be released together with the Saikyo Jump’s September issue that is scheduled to be released on 4 August next month. More production details on the upcoming manga include Koyoharu Gotouge, who will be working with Natsuki Hokami as the creators of the spinoff.

The Kimetsu Gakuen will feature characters from the main series of the spinoff anime of the same name in chibi style based on the shots already aired after the anime’s episodes. 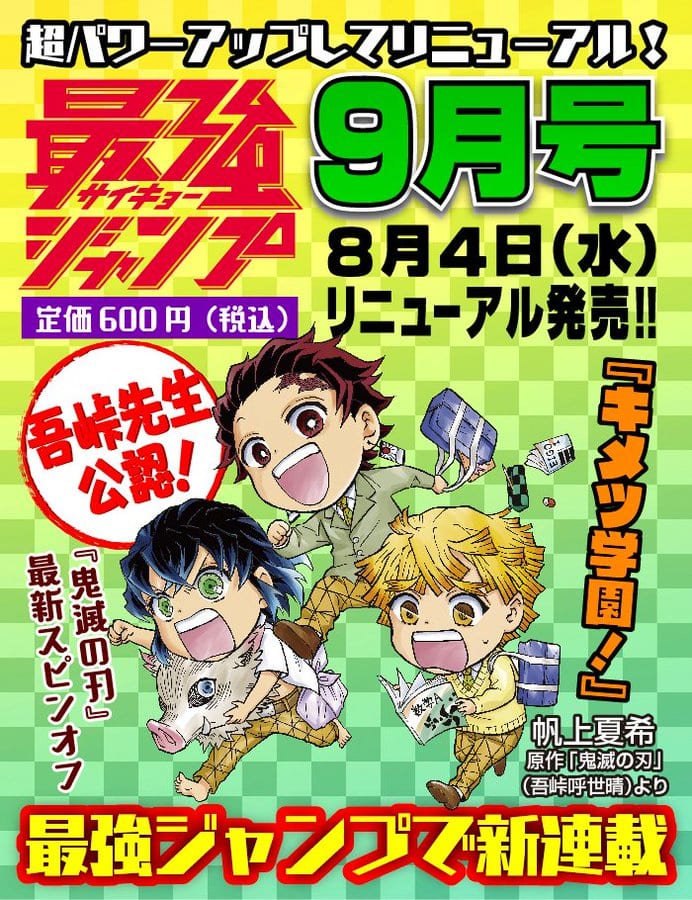 The official Twitter announcement of the news revealed that Kimetsu no Yaiba’s latest spin-off, “Kimetsu Gakuen,” will be the new serialization with the biggest manga jump magazine.

The storyline of Kimetsu Gakuen or its synopsis has not been revealed yet. So this means that more details will be revealed later on. For now, there are only a tear visual and official confirmations of the spinoff.

The spinoff is also inspired by Demon Slayer Kimetsu no Yaiba manga launched back in 2016. The manga only ended not long ago, in May 2020, and was serialized in Shueisha’s WSJ. The 23rd volume of the manga was also published in December 2020 and inspired a TV anime.

Demon Slayer Kimetsu no Yaiba anime ran for its first season that debuted in April 2019 and was recently followed by Demon Slayer Infinite Train movie that was released last year in October. The 2nd season of the anime, Demon Slayer Season 2, has been announced with its broadcasting details and release date to be confirmed soon.

Kimetsu Gakuen shots that will be getting the spinoff premiered earlier this year on valentines day under “Kimetsu Gakuen Valentine-hen,” which was a valentine’s day themed shorts featured the characters from Demon Slayer manga in a school setting.

Characters like Nezuko, Tanjiro, and Giyu appeared in the shorts and will also appear in the scheduled Demon Slayer Kimetsu no Yaiba – The Hinokami Chronicles anime-based video game as playable characters.

That will be all of the official updates made so far, so for now, we can expect full details to be released in due time. So we should always be on the lookout with a lot of more manga and anime news coming through lately.