From the sweet high school girl, Eun Dan Oh (Extraordinary You), to the independent, strong lady of the Joseon era, Kim Jo Yi (Secret Royal Inspector & Joy), Kim Hye Yoon has delivered her top-notch acting in various dramas and movies. Thus, let's take a look at the top performances by her. 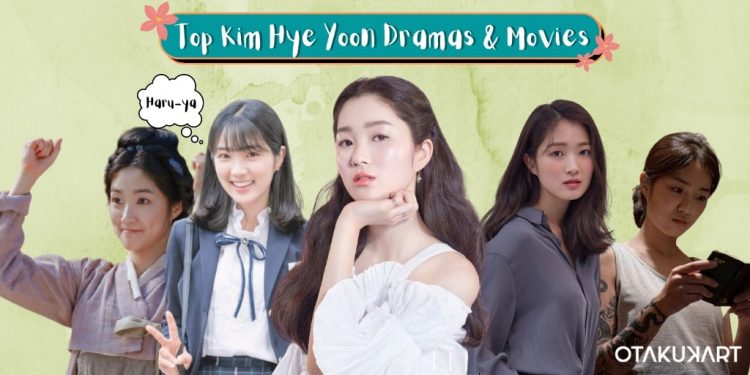 Here we have brought the list of top Kim Hye Yoon dramas and movies that prove her versatile acting. Kim Hye Yoon has been working in the Korean entertainment industry for almost a decade. Every year, We see thousands of new talents in the dramaland, but only a few are able to last in this fierce competition, and Kim Hye Yoon is one of them! Many people may not know, but Hye Yoon has appeared in more than 30 tv-series and eight films. Also, her filmography does not end here! She has also acted in numerous web series and short films, and believe it or not, her outstanding acting will leave you speechless!

The South Korean actress Kim Hye Yoon entered the drama world in 2013 with KBS2’s ‘Samsaengi,’ where she played the teenage Jung Yoon Hee. With her upbeat and bright persona, Kim Hye Yoon has left various memorable imprints after working as a teenage actress, supporting roles, and eventually main leads. Even among several supporting roles, she has showcased different sides of her acting by taking on challenging parts. Thus, we have prepared this best Kim Hye Yoon drama list!

Usually, Kim Hye Yoon is known for her glowing, bubbling, sweet character. However, she has also delivered exceptional versions in numerous tv-series and movies such as Legend of the Blue Sea (Jang Jin Ok’s daughter), Tunnel (young Kim Young Ja), Bad Guys (Oh Ji Yeon), Memoir of a Murder (young Maria) and many more. Her roles in Bad Guys, Sky Castle, The Girl on a Bulldozer, etc reveal her diverse acting skills.

While persisting in her acting career, Kim Hye Yoon earned a full scholarship in South Korea’s Konkuk University, setting a high standard of beauty with brains. Kim Hye Yoon’s drama list is pretty long. Therefore, the following list may not contain all the tv series but the best ones only. Thus, take a look at the top dramas and movies of Kim Hye Yoon that must add to your watchlist!

Here comes the newly released film ‘The Girl on a Bulldozer’ that uncovers a different version of Kim Hye Yoon! In this movie, Hye Yoon has showcased her remarkable acting by playing the role of elder sister, who suddenly becomes the head of the house after her father’s death. Here, Hye Yoon has played a completely different character. A bold, strong girl, who doesn’t kneel before anyone! Therefore, it is has made it on the top list of Kim Hye Yoon’s dramas and movies!

‘The Girls on a Bulldozer’ follows a hopeless girl Hae Young. She is infamous for having tattoos all over her body, using vulgar language, and getting violent. In short, a whole package of troublemakers! Hae Young lives with a younger sibling and her father, who runs a Chinese restaurant. One day, she loses her father in a mysterious accident leading her to become the head of the family.

Now, she has to look after her younger sibling, be responsible for her action. On top of that, Hae Young also begins investigating to find the truth behind her father’s death, and thus she has to be a fighter to stand against the ugly world. In this battle, a detective tries to help her, but it seems her life is far from being comfortable or methodical!

The historical romance comedy ‘Secret Royal Inspector & Joy’ has made it on the best dramas and movies of Kim Hye Yoon! Once again, Kim Hye Yoon has shown off her sweet dimple and adorable act in ‘Secret Royal Inspector & Joy.’ She has broken all stereotypes about divorce women from the Joseon Era, delivering her versatile acting while playing an independent and smart female character. She bears the responsibility for her action while motivating other women to come out of their shells.

The kdrama ‘Secret Royal Inspector & Joy’ revolves around Ra Yi Eon and Kim Jo Yi. Ra Yi Eon is a secret royal inspector who has to work in shadow to uncover corruption then ensure its perpetrators face justice. In reality, Yi Eon wants to open a dumpling stall. Meanwhile, Kim Jo Yi is a woman who breaks all unorthodox views on divorce when the Joseon era the most of the women suffer in silence due to intolerable marriages. Unexpectedly, the two cross paths where Jo Yi, who is always up for an adventure, joins Yi Eon’s team. Thus, together they expose wrongdoing and wipe out corruption.

If you want to look for Kim Hye Yoon’s feisty role, you should give it a try to ‘Sky Castle’! In ‘Sky Castle,’ Kim Hye Yoon has played the supporting role, Kang Se Yeo, the eldest daughter of Han Seo Jin, who wants to secure a seat in Seoul National University’s medical faculty. She wishes to be a third-generation doctor just like her father. Although she is not an antagonist of the main story, her spoiled, self-centered, impulsive behaviors can boil anyone’s blood in anger. However, Hye Yoon’s unrequited love with SF9’s Chani will make you root for her. Thus, ‘Sky Castle‘ has come on the top list of Kim Hye Yoon dramas and movies to reveal her spoiled character.

‘Sky Castle’ is one of those kdramas that bring different emotions in each episode. The story follows four high-class women, Han Seo Jin, Jin Jin Hee, Noh Seung Hye, and Lee Myung Joo, who live with their families in SKY castle, a luxury private resident area for wealthy professors and doctors. Like any other mother, all four ladies wish their children to enter prestigious universities, and thus, they are actively supporting their education. However, everything is not as simple as it appears to be. After Lee Soo Im moves to SKY Castle, things start to change. Little by little, she uncovers the truth of what happened to Myung Joo’s family and their relation to the grade coordinator, Kim Joo Young.

The newly released kdrama ‘Snowdrop’ has uncovered a new charming point of Kim Hye Yoon’s acting. Here she plays the role of a phone operator at Hosoo Women’s University dormitory. She has to work since she could not go to college due to financial issues. Despite being poor state, Kim Hye Yoon delivers a playful, bright character with her adorable bestie goal with the main lead, Kim Jisoo. Chaos happens whenever she goes with her mischievous role that will leave you rolling on the floor, making your weekends filled with laughter. Thus, ‘Snowdrop’ has made it on the list of best Kim Hye Yoon dramas and movies!

The kdrama ‘Snowdrop’ is a romantic melodrama that follows Im Soo Ho and Eun Young Ro’s love story. The female university student, Eun Young Ro, falls in love with Im Soo Ha at first sight and thus takes care of him after discovering him coated in blood despite the strict surveillance and dangerous circumstances. After uncovering his secret, the pair has no option but to part away. Soo Ha needs to move according to the command to save his teammates. After all, he has to return to his home country, where his sibling awaits. Meanwhile, Young Ro refuses her father’s will and works with Do Ho to help her love and save her friends.

Finally, ‘Midnight‘ is on the top Kim Hye Yoon movies and dramas list. In this film, Kim Hye Yoon has played the victim’s role delivering her character with little details and raw emotions that will break your heart. She becomes the victim of serial killers’ hunger for insanity. Her remarkable acting will make you root for her to get justice. Overall, ‘Midnight’ is another piece of work presenting an intense and powerful performance by Kim Hye Yoon.

The thriller mystery film ‘Midnight’ shows a life-threatening hide-&-seek between a psychopathic serial killer and a deaf woman. The story follows the girl with hearing impairment, Kyeong Mi, who lives with her mothers and works at the customer cell center. After having an unpleasant dinner with the client, Kyeong Mi picks up her mother and drives home. Meantime, the killer Do Shik spots his target, Kyeong Mi’s mother, who is waiting for her daughter to park her car. However, at the last moment, he changes his target to another girl, So Jung, who passes him by talking on the phone. In the end, So Jung gets stabbed by Do Shik in the back alley. But thankfully, she is found by Kyeong Mi, who ends up becoming Do Shik’s next prey!

Finally, the masterpiece ‘Extraordinary You’ has topped the best Kim Hye Yoon dramas and movies list. Kim Hye Yoon has given one of the memorable performances here. With her bubbling personality and adorable act, Kim Hye Yoon as Eun Dan Oh has left a sweet imprint in fans’ hearts. Not to forget, her beautiful chemistry with SF9’s Rowoon and Lee Jae Wook is still a hot topic among fans. Eun Dan Oh is a girl with a heart problem who makes desperate attempts to change her fate and love the boy who stays with her during all ups and downs. And Kim Hye Yoon as Eun Dan Oh has nailed it! No wonder ‘Extraordinary You’ is still favored among fans with her iconic ‘Haru Yaa’!

The kdrama ‘Extraordinary You’ is a romantic comedy featuring the love story of webtoon characters. The tale follows the 17-year-old high school student, Eun Dan Oh, who is diagnosed with a heart problem. All she wishes is to live longer and be loved by her childhood crush and fiance, Baek Gyung. However, one day she discovers that there are gaps in her memory. While solving this mysterious occurrence, Eun Dan Oh learns that she is nothing but a character in the webtoon, and that’s an extra! Realizing the unbreakable fate put on her due to the writer’s plan, Eun Dan is ready to make her own love in her own plotline by using the flashes of storyboard only she is able to see. In this adventures journey, another extra, Number 13/Haru, and the second lead of the webtoon, Lee Do Hwa, also join!