Jung Hae In’s K-dramas That You Need To Give a Chance Before Snowdrop! 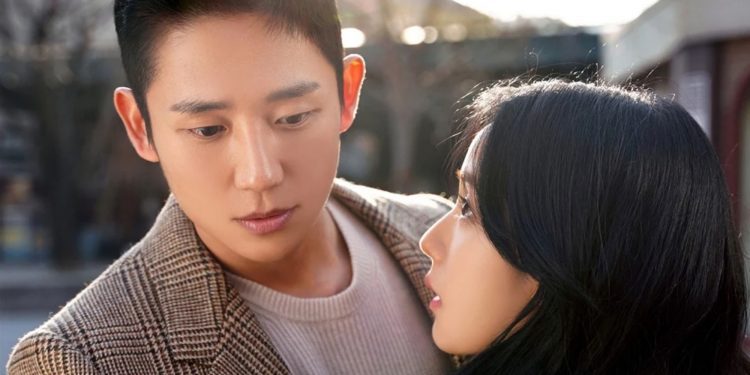 With Jung Hae In’s k-dramas ‘Snowdrop’ nears its release date, he’s becoming the talk of the k-town. Realizing that he wants to become an actor during his military service. Hae In started his stage career in college musicals. Making his official acting debut in AOA Black’s music video for “Moya” in 2013. He is now one of the best actors out there who keeps on becoming better with every new project. Many of us remember him from Goblin as Eun Tak’s childhood friend Choi Tae Hee. The guy whom Goblin helped in getting rid of the piano.

Making his TV series debut with 2014’s “Bride of the Century”, he has come a long way. From doing supporting roles in shows like Night Light, Reply 1988, Prison Playbook. He’s having the time of his acting career with continuous main leads in major k-dramas. And proving his potential. Having two more upcoming k-drama projects to his name. We sure need to catch up on Jung Hae In’s k-dramas to keep the track of some amazing stories out there.

Here Is A List Of Jung Hae In’s K-dramas That You Need To Give a Chance Before Snowdrop!

‘While You Were Sleeping’ is the k-drama where we met Jung Hae In as the second lead and cried when he ended up alone and got a consolation prize of employment starring alongside the heartthrob, Lee Jong Suk and the nation’s crush Bae Suzy. The story of Jung Hae In’s k-dramas follows three people with the ability to see the future with dreams. The three, Hong Ju, an aspiring reporter, Jung Jae Chan, a rookie prosecutor, and Han Woo Tak, a young police officer. As they meet and start having dreams about one another. They realize that their lives are now somehow entwined. And end up solving a huge case.

‘While You Were Sleeping’ took some usual k-drama cliches and put them together. The drama has gotten mixed reactions, with fans either hating it or loving it. But the drama lies in the middle. At times it will make you laugh at Lee Jong Suk’s goofy character, and it will make you angry at his superior. And as you move further into the story and the past unravels, you are bound to cry. It’s a fast-paced drama that jumps between scenes and keeps you guessing and wanting more.

Something In The Rain

‘Something In The Rain’ and ‘One Spring Night’ goes hand in hand, being Jung Hae In’s leading k-dramas. Both k-dramas have the same writer and director, along with the star of the article Jung Hae In. Starring alongside ‘The Last Princess’ fame Son Ye Jin, the story challenges the old norms of the conservative society. The story follows Yoon Jin Ah, a woman in her 30s with no experience of dating. She’s clumsy, reckless, and foolish so she always ends up getting dumped. And as she was getting dumped and humiliated once again, somebody appeared. Her childhood friend’s younger brother Seo Joon Hee. And as they start spending time together, it doesn’t take much time for them to fall in love.

Watching ‘Something In The Rain’ is watching two people slowly and then passionately fall in love with one another. While many fans think the show could’ve been a two-hour movie, it’s still a good try. The characters are extremely bi-dimensional, with no explanation, flashback, or insight is given to justify their motivations. But the romance and the realism in the story make it bearable. Its complex, realistic, and fascinating at the same time. The show has 16 episodes in total, with each having a runtime of 70 minutes.

Starring alongside ‘Rooftop Prince’ fame Han Ji Min and ‘Time’ fame Kim Joon Han, this Jag Hae In drama is one of the best dramas about growth. Let it be of the writer or the characters. The story follows Yo Ji Ho, a pharmacist and a single father. And  Lee Jeong In,  a librarian in her 30s. Jeong In has a routine and a relationship with Kwon Gi Seok, but she isn’t happy with that. While Gi Seok wants to take a step further in the relationship, Jeong In wants to go as far away as she can. Not wanting to be unhappy, she decides to prioritize herself. Things begin to change when she met Ji Ho at the pharmacy.

As innocent daily interaction starts turning into a deeper attachment as the two find themselves drawn to one another. ‘One Spring Night’ is a story of two people who fell in love despite the whole world telling them not to. Challenging the conventional norms of Asian society, the drama beautifully captures the challenge and turns it into a heartwarming love story. From the chemistry between the characters to the music score and storyline. “One Spring Night’ hits the right note. The k-drama is quite a long one as it has 32 episodes in total, with each episode having a run time of 60 minutes.

A Piece Of Your Mind

The tvN drama starring Chae Soo Bin, Lee Ha Na, and Kim Sung Kyu alongside Jaun Hae In tells the story of Moon Ha Won. He is an innovator in the world of artificial intelligence programming. Quite popular in the AI industry, he is the founder and brain behind M&H, a portal site. He’s the ideal man everybody wishes to be with. But when it comes to love, he believes that having a small fraction of his love’s heart is enough to sustain him. But as he crosses paths with Seo Woo, a classical music recording engineer, things begin to change. Seo Woo has seen the hardships in life. Having no one to lean on to and still have an open and optimistic mindset, believing that all things happen for a reason. She’s been leading her life.

‘A Piece of Your Mind’ is like taking long sips of warm tea on a rainy day. It is meant to be felt and not to be understood. The drama sucks you into the character’s memories, showing you just bits and pieces of what happened. The cinematography and the performances are just chef’s kisses. With Seo Woo being one of the best characters k-drama land has to offer. The show has twelve episodes, with the runtime of each being 60 minutes. If you are looking for something to enjoy slowly and taking your time, ‘A Piece of Your Mind’ is a must-watch.

D.P. is a six-episode k-drama, starring alongside ‘Beaten Black and Blue’ fame Koo Kyo Hwan, ‘Untouchable’ fame Kim Sung Kyun, and ‘Matrimonial Chaos’ fame Son Seok Koo. Jung Hae In plays the role of Ahn Joon Ho, a private soldier. Becoming a member of the military defector arrest team. He’s told to handle the soldiers who ghost their duties without any official leaves. What Joon Ho thought would be a simple task of catching the defectors. He soon realizes that the work isn’t that easy as behind the ghosting lies unthinkable issues. The story is based on the webtoon “D.P Dog Day” written and illustrated by Kim Bo Tong.

D.P. seems like a regular military k-drama, while it is much more than that. It feels like a walk into the cold waters from a beautiful beach. With every step, the ocean gets deeper, making you see things you’ve might’ve never seen. The story deals with some pretty heavy issues that take you on an emotional rollercoaster of anger, tears, a little bit of laughter, and maybe some comfort. It perfectly captures the complexity of the characters and tackles important issues such as bullying, suicide, group mentality, domestic violence, poverty, and a lot more. For somebody wanting to take a drip down on the dark side of the town, D.P. is a must-watch. The show is also set to release its second season in the upcoming year.

Gabby Petito’s Net Worth: How Much Did She Actually Earn?

Will Kishou Arima die in Tokyo Ghoul? The CCG’s Reaper