The Legend of The Blue Sea Season 2 updates

“The Legend of The Blue Sea” is an SBS drama that made its first appearance on November 16, 2016. With 20 episodes under its belt, the drama concluded on January 25, 2017. Due to its popularity, it is now available on multiple platforms. Hence, it has become one of the most-talked and mentioned Kdramas outside South Korea. In addition to this, Lee Min Ho’s popularity elevated the success of the drama. So, it is obvious to stream The Legend Of The Blue Sea once if you are a K-drama fan.

The Legend Of The Blue Sea Season 2 Renewal

The fantasy romantic drama finished on a “happy note,” giving fans a broad smile on their faces. Hence, there was nothing for “The Legend of The Blue Sea” to show to fans in a new season. Sadly, there is no renewal update on The Legend of The Blue Sea season 2. Considering that the scriptwriters have nothing to get more inspiration from, The Legend of the Blue Sea might not get an S2. Apart from this, its original network, SBS, has made no comments on its plans for LOTBS S2.

The Legend of The Blue Sea Season 2 Release Date

As mentioned above, the SBS drama is not renewed for a new season. Therefore, The Legend of The Blue Sea season 2 release date does not exist. Many of the fans were looking forward to the new season. Although there is nothing for the drama to display in the new season, viewers could have witnessed the happy life of Shim Chung and Joon Jae with their babies. As seen in the ending of The Legend of The Blue Sea, we find Shim Chung pregnant with Joon Jae’s baby. But, it would have been exciting to meet their human-mermaid kids.

Sadly, that’s a story for our imagination. We could only guess how beautiful their kids would have been.

The Legend Of The Blue Sea Cast

There will be no season 2 for LOTBS, but it doesn’t mean that we can’t rewatch a good, well-structured, and comedy-drama. The cast of the drama is enough to entice you into streaming the beautiful Kdrama.

For starters, it is led by the Hallyu star, Lee Min Ho, who is known for his roles in “Boys Over Flowers,” “The Hiers,” “City Hunter, ” and more. After the 2016 drama, the star joined the military to complete his mandatory service. After returning, he appeared in Netflix’s “the King: Eternal Monarch.” He is currently preparing for Apple’s original Kdrama, “Pachinko.” State one thing, Lee min Ho can’t do. We bet you can’t. In “The Legend of The Blue Sea,” he plays a double role- a con man in the modern world and the son of a nobleman in the Joseon era.

The drama’s leading lady is Jun Ji Hyun, who is another renowned actress in the Kdrama world. The actress earned love and attention due to her central part in “My Love From The Star.” At present, she is starring in “Jirisan” and is doing 40s better than anymore. In the drama, she played a mermaid who travels/ swims to find her one true love, Kim Ryung (Min-Ho) from the Joseon Dynasty. She sees his doppelganger, Joon Jae, and starts living with him.

The two fall in love and give us some of the best romantic and comedy scenes from the Kdrama sector.

Legend of The Blue Sea Plot

By now, you must have been thinking why everyone was talking about the drama in 2016. Well, they still talk about it. And, one of the reasons is the plot of the drama. Undoubtedly, the acting, OSTs, action, and comedy don’t come second. The plot structure is incredible.

The drama follows Shim Chung, a mermaid from the Joseon Dynasty, who travels centuries to find her first love, Kim Ryung. After arriving in the modern world, she encounters Heo Joon Jae, Ryung’s doppelganger and also a conman. At first, Joon-Jae is uninterested in her, but after his eyes capture the $6 million bracelet on Shim Chung’s wrist, he brings her home. Joon Jae helps her settle within the new world while planning his mischievous acts on the side.

However, his own history and step-brother are another hassle in the way. In addition to this, someone knows about Shim Chung’s reality of being a mermaid and takes an oath to kidnap her for money. While protecting Shim Chung, his secret, and discovering his past life as Kim Ryung, Joon Jae falls in love with Shim Chung. 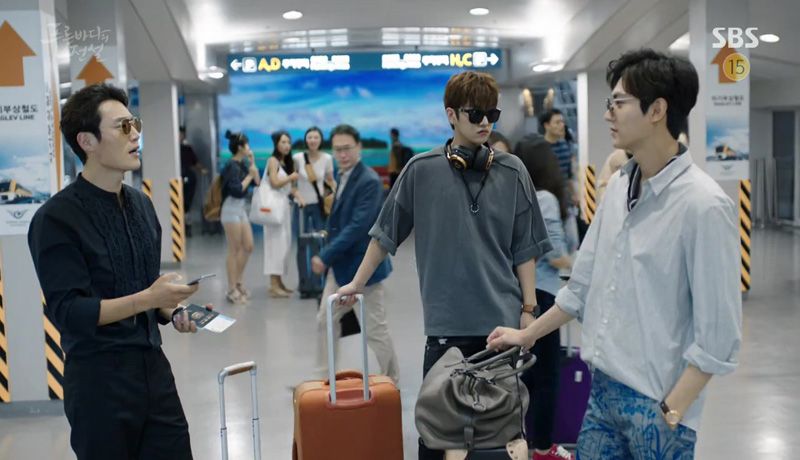 The two face many battles together; from the bad guys to hilarious situations, they make viewers laugh. Besides their chemistry, the supporting cast does an incredible job of elevating the fun in the scenes.

Watch Shim Chung and Joon Jae make each other flutter in two eras. Further below are the streaming details.

The Legend of The Blue Sea Online Watch and Streaming Details

Due to its immense popularity, LOTBS is available on various platforms. So, if you live on the other side of the world, don’t worry, there’s an option for you as well. Premium Streamer Hulu has The Legend of The Blue Sea. Hence, if you own a subscription to the streaming network, tune in to watch the drama right away. Also, it offers subtitles in the English language. Earlier, the drama was also on Netflix, but the giant recently put it down.

On the other hand, online services like WeTv, Rakuten Viki, Apple TV, and SBS VOD (Video on Demand) offer the show for free. You can find more Kdramas on these platforms as they encompass a vast library of Korean dramas and films. They also provide subtitles in various languages. So, it’s a win-win for everyone.

The episodes were initially broadcast on SBS, the original network, in November 2016. It is written by Park Ji Eun, who is also known for adorning dramas such as “Crash Landing on You” and My Love From The Star” with her writing skills. Meanwhile, Jin Hyeok directs the drama; He is known for Sisyphus: The Myth, Doctor Stranger, The Master’s Sun, The City Hunter, and others.

The drama also features OST’s from artists like Yoon Mi Rae (A World That Is You), Lyn (Love Story), VIXX’s Ken (Fool), Sung Si Kyung (Somewhere Someday), and the list goes on.

We are at the end of our ride, and until now, we have praised the drama. Sadly, there will be no Legend of the Blue sea season 2. But, thankfully, the first installment did wonders. Not only did it win millions of hearts, but it also did wonders on the number board.

As per Nielsen Korea reports, the SBS fantasy drama had a strong viewership rating of 16.4%. Moreover, it surpasses the 20% level during some episodes while also maintaining the number 1 spot of the most-watched dramas of that time. Jun Ji Hyun was praised for her acting and displaying her goofiness and vulnerability all at once. In brief, there is nothing to love about the drama. It’s definitely a whole deal!

Also, Read 31 Best Romantic Korean Dramas of all the time.

How Brandon Lee Passed Away? All We Know About Bruce Lee’s Son