SKY Castle is the highest-rated South Korean television series of 2018. But recently, in 2020, The World of the Married broke the record of SKY Castle. And now SKY Castle is the second-highest-rated K-drama to date. Also, both the highest rating and record-breaking JTBC’s dramas are far away from the fluffy, cushy romance genres. And the same is with the drama SKY Castle. Starring Yum Jung Ah, Lee Tae Ran, Yoon Se Ah, Oh Na Ra, and Kim Seo Hyung, this drama reveals dark stories of the five families. Moreover, SKY Castle has won many awards, including four awards at the 55th Baeksang Arts Awards. Also, its OSTs (Original Soundtrack) got a lot of recognition and awards as well.

To explain more about SKY Castle, SKY stands for Seoul National University, Korea University, and Yonsei University. This term is quite popular in South Korea and can be heard in casual conversations. Also, the mentioned universities too use this term and the media broadcast as well. In South Korea, completing education from one of the SKY universities determines one’s high social status and successful career. Moreover, picking up such a topic for a story of drama and portraying how to untangle the complications caused by social paradigms through it is the main theme of SKY Castle.

The cast of Sky Castle

This series has flourished vigorously with the stunning acting of the artists and the profound hard work of the staff. So, let’s have a look at the cast of SKY Castle. Firstly, this hit has directions by Jo Hyun Tak and writings by Yoo Hyun Mi. Secondly, the original network of this drama is JTBC and the distribution is between JTBC, Netflix, and iflix. And lastly, SKY Castle falls under the educational, family, psychological, dark humor, satire, and mystery genres. Moreover, it has quite a huge cast including the husband of the five main leads, their children, and the other supporting members from each family.

Starting from the main leads, Yum Jung Ah as Han Seo Jin/Kwak Mi Hyang is the mother of Kang Ye Seo and Kang Ye Bin and the wife of Kang Joon Sang. She wants her daughter to get into the Seoul National Medical University. Also, she has a past kept from everyone but her husband and in-laws that she grew up in a poor family. Lee Tae Ran as Lee Soo Im is the stepmother of Hwang Woo Joo and the wife of Hwang Chi Young. Her family is different from the other families in the SKY Castle and she thinks that forcing children to get into universities is way too harsh. Also, she is a childhood friend of Seo Jin and knows her real identity.

Yoon Se Ah as No Seung Hye is a protective mother of Cha Se Ri, Cha Seo Joon, and Cha Ki Joon. And the wife of Cha Min Hyuk. She becomes the friend of Soo Im and agrees with Soo Im’s different aspects about the educational paradigm. Oh Na Ra as Jin Jin Hee is a mother of Woo Soo Han and the wife of Woo Yang Woo. She is the friend of Seo Jin and tries to bribe her with gifts to achieve her latent motives. Kim Seo Hyung as Kim Joo Young is a known private tutor who teaches only two students at a time. Her success rate is a hundred percent for getting a student into the desired university and only teaches to elite students. Also, she has a past from which she tries to escape. 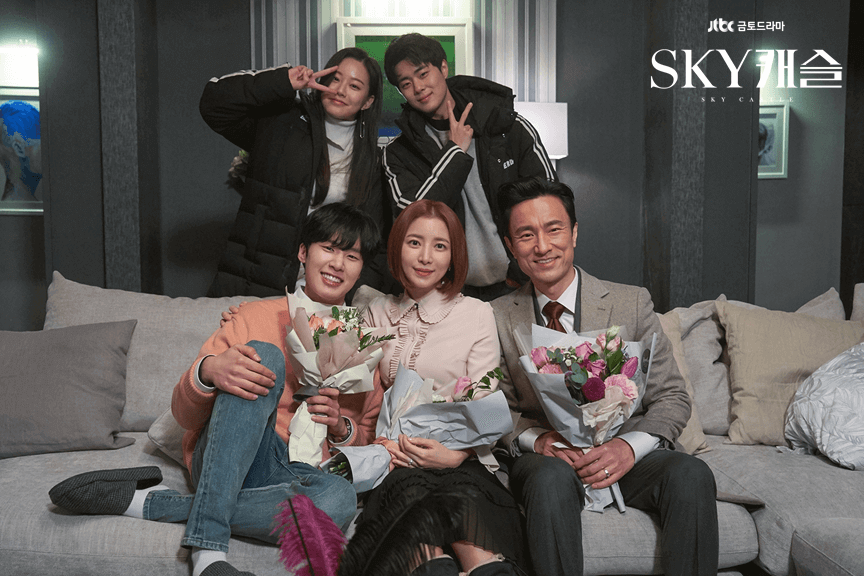 In the Hwang family, Choi Won Young as Hwang Chi-Young is the husband of Soo Im. He grew up in the orphanage owned by Soo Im’s family and becomes a doctor at Joo Nam University Hospital. He is the rival of Joon Sang. At first, he marries Woo Joo’s real mother but after her death, he remarries Soo Im. Kang Chan Hee as Hwang Woo Joo is Soo Im’s stepson but she treats him like her real son.

In the Cha family, Kim Byung Chul as Cha Min Hyuk is the husband of Seung Hye. He works as a law school lecturer and has very high expectations from his children. Park Yoo Na as Cha Se Ri is the Cha family’s daughter. Also, Kim Dong Hee as Cha Seo Joon and Jo Byung Gyu as Cha Ki Joon are the twins and sons of Seung Hye.

In the Woo family, Jo Jae Yoon as Woo Yang Woo is the husband of Jin Hee. He is an orthopedic surgeon and on good terms with Joon Sang. However, behind his back, he respects Chi Young. Lee Eugene as Woo Soo Han is Jin Hee’s son who is not interested in studies. But push himself to do well in academics due to pressure.

To sum up the 20 episodes of this drama, it has an intense satirical plot. When Myung Joo commits suicide, everyone tries to get information from their sources. The five families who used to seem happy and contended suddenly sense the tragedy after the suicide. Myung Joo was on cloud nine when her son gets into the prestigious university but when she suicides after some days, everyone tries to find out the odd. But, after Myung Joo’s death, her family moves out of SKY Castle– a place allotted to affluent doctors and professors. But, when the Hwang family starts living in that neighborhood, many things seem different than usual. The educational pressure over the children to maintain the social status and standard is used to the routine. However, the Hwang family is the opposite of this trend and a genuinely happy family.

All this sequel of incidents makes everyone rethink and reconsider the values of life. Not just life but the educational standards, the social expectations, and various paradigms which was like a ritual to everyone. A major life lesson in a simple form is a hidden gem behind this drama. However, after the series of ups and downs, twists and turns, mental exhaustion, and self-harm, all settle down slowly as the end approaches. As a person living in this world, everyone should look at such social fences at least three or more times. And to conclude about the series, it is a must-watch suggestion at least once. Besides, the acting and plot are just awesome. Just go for it. Also, watch the trailer of SKY Castle on YouTube.

Where to Watch SKY Castle?

Well, SKY Castle is the original of JTBC and you can watch a lot on JTBC’s website. This drama aired between November 2018 and February 2019 on the JTBC channel. It consists of a total of 20 episodes and each episode is around 60-80 minutes. Also, this drama is rated 9.6 out of 10 on Rakuten Viki. SKY Castle is available on Netflix with English and other subtitles. It is also available on Rakuten Viki with subtitles in around 30 languages. Another option to watch this drama is iflix, but the site might not be available in some regions, so check it out beforehand. However, Rakuten Viki and Netflix are easily accessible, so both are the recommended platforms to watch this show online for free. If you are new to Netflix, then it needs a paid subscription to get access to the shows.