It is a well-known fact that you wouldn't be able to relate to a character as much as a character with a sibling! 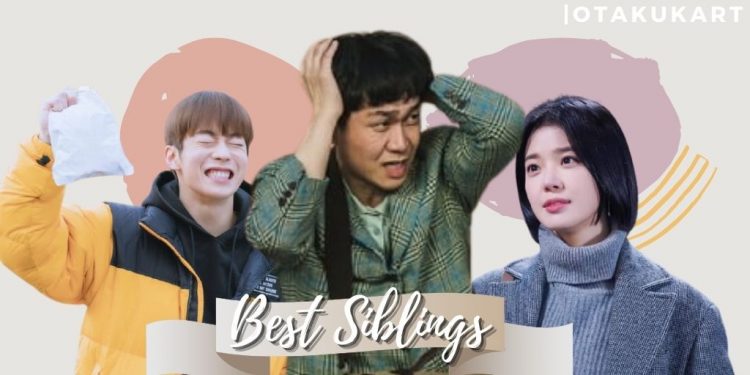 There is no doubt that kdrama siblings add spice to any K-series. From caring siblings to relatable ones, there’s a variety out there! Honestly, you can’t have as many types of foods as siblings in kdramas. On one side, you have those annoying and bratty younger siblings (Kim Hye Rin from She Was Pretty) that get on your nerves, while on the other are the older and more responsible ones. There are those sorts of siblings that wouldn’t let anyone harm their younger siblings, for example, Na Moo from Come And Hug Me. Another common occurrence that you might find in chaebol-based K-series’ is that the siblings would be fighting for the inheritance ever since they were born (ehm, Kim Won and Kim Tan from The Heirs, ehm).

In addition to that, the shenanigans and interactions between these siblings are so hilarious that the audience would continue watching the K-series just for them. Also, you can’t forget twins and their mischievousness. You could make a year-long compilation of a rich twin and a poor twin exchanging their lives in kdramas. However, nothing could get kdrama fanatics to get more teary-eyed than watching two long-lost siblings reunite. Dal Po and Ki Jae Myung, where are you guys at? Without further ado, we will be looking through all of the categories and naming kdrama fans’ favorite siblings of all time!

First up are some of the most good-looking siblings in a kdrama, Jung Joon Hyung and Jung Jae Yi. These two are actually not blood-related, so it is quite pleasing to see them getting along. Jung Joon Hyung had been abandoned at his aunt and uncle’s place by his mother when he was a little toddler. His cousin Lee Jae Yeon, ever since Jung Joon Hyung started living with them, cared for him and loved him as if they were a real family. They never had a hitch in their relationship until Jung Joon Hyung’s love interest started liking his older brother. It, of course, made things a bit uncomfortable and made Jung Joon Hyung a bit frustrated that his elder brother doesn’t even notice that Kim Bok Jo has a crush on him. However, as time passes by, the brothers make amends and clear the misunderstanding.

Kdrama: Cheese In The Trap

Baek In Ha and Baek In ho must be one of the most iconic siblings in kdrama. Both of them are very different and have polar-opposite personalities, but have one thing in common, they are second leads. Their constant fights and quarrels will make you think about how these two survived in a house without strangling one another. Just a look at these two will remind you of your own siblings.

Whatever they may show in hindsight, the siblings care for each other a lot. Baek In Ha is a crazy shopaholic and would do anything to get money on her hands so that she could hit the shop with her friends. She always asks her younger brother Baek In Ho for money, and he unwillingly gives her what she wants every time. Plus, fans loved the determination to protect her brother at all costs (all though it failed miserably). Of course, romance and the second-lead syndrome were some of the most significant parts of the K-series. The audience finds these siblings’ relationships precious. Moreover, go ahead and give Cheese In The Trap a try on Rakuten Viki.

Kdrama: My Father Is A Strange

My Father Is Strange must be one of the best family-based kdrama ever! The plot revolves around a family who had been living their perfect life on the outskirts of Seoul until something happened. The mother of the family had devoted her life to taking care of her three children and son. But one day, an idol group member turned actor Jong Hee shows up at their house claiming that he too is part of the family. Jong Hee joined the Byuns because he wanted to prove his acting skills. Basically, he had been mission a lot of cool acting opportunities and had been losing his spark. That is why he decided to go to his ‘father’ to improve his acting skills.

Though he isn’t the only brother who is going through a rough patch. While Park Song Hoon longs for a lover, Par Gi Hoon has been hustling more and more to earn back his former glory. Just like typical brothers, they bicker about each other’s habits and fight and are also there for one another. The story follows him, his brother’s and his employee figuring out the real meaning of life and the importance of family. There’s no doubt that My Mister will bring tears to your eyes! If you find heart-touching kdramas you type, give My Mister a chance on Rakuten Viki.

This list wouldn’t be complete without the sibling trio of True Beauty. Many fans can relate to the relationship of the siblings in the K-series. First up is the calm and collected oldest child Lim Hee Kyung, the quiet and cool-tempered middle child Lim Joo Gyung, and the irritating and king of the house youngest child Lim Joo Young. It was quite entertaining seeing the youngest ones fight and quarrel as you can relate to them a lot. Lim Joo Yung used to poke fun at Joo Gyung, while Lim Hee Kyung used to support her younger sister’s dream of becoming a makeup artist. Even when their views were different, Joo Young and Hee Kyung showed Joo Gyung’s bullies who were the boss and also helped Joo Gyung realize that it’s important to be true to herself no matter what. Their friendship was very wholesome! If you still haven’t given the show a try, check it out on Rakuten Viki.

Spoiler alert to those who haven’t started watching Goblin. One of the best long-lost siblings reunions in kdramas must surely belong to the all-time great Goblin. Sunny is an attractive and good-looking chicken restaurant that hires the Goblin’s bride Eun Tak. Unknown of her past life, she meets Eun Tak’s boyfriend, Kim Shin, the Goblin. Of course, Goblin took his time to recognize his sister, who was reborn with a new face in the current life. The audience couldn’t handle how sad the Goblin looked whenever he saw his beloved sister Sunny and couldn’t tell her who she was.

As the drama progresses, both of them come to know how they were related in their past life and form their sweet brotherly and sisterly bond. One of the most memorable moments of them is Go Eun, and Goblin tried to patch up Sunny and Grim Reaper’s relationship. Goblin literally called Sunny an egg yolk and The Grim Reaper egg white. Count on your brother to make the environment more awkward! Revisit the amazing and legendary kdrama Goblin on Rakuten Viki.

Kdrama: It’s Okay To Not To Be Okay

Next up are the lovely pair of siblings Monn Gang Tae and Moon Jung Se from the popular kdrama It’s Okay To Not To Be Okay. You could say that the bond of these two siblings is one of the most layered and meaningful in the kdrama world. At the beginning of the K-series, Moon Jung Se and Moon Gang Tae had a very complicated relationship. Moon Gang Tae’s older brother Moon Jung Se is autistic and is a huge fan of Moon Ga Young’s (the female lead) work. Moon Jung Se also has had a traumatic past as he had been the sole witness to his mother’s murder, which led to his unusual fear of butterflies. Because of this, Gang Tae moves town every spring with him solely because his brother ‘wants to run away from the butterflies’.

Over the course of 16 episodes, the tables turn, and Moon Jung Se heals the mental trauma of Kim Soo Hyun’s character Moon Gang Tae. The magnificent K-series It’s Okay To Not To Be Okay covers the topic of mental illness in a beautiful way. It had been one of the best kdramas of the year 2020. So, if you still haven’t watched this, It’s Okay To Not To Be Okay, and have been sitting in the dark, go straight to Netflix and stream it.

You couldn’t expect less than the diamond of kdramas itself, SKY Castle. Sky Castle is known for its unique plot and also touching upon rarely discussed topics. One of these topics is the harsh and cruel study environment the children of higher society have to deal with worldwide. How countless parents use their own children to fulfill their greed is perfectly portrayed by the writer Yoo Hyun Mi. The audience had loved how the children of Sky Castle joined hands to fight over the toxic way of studying.

The audience had fallen in love with the Cha siblings, who were there to support each other whenever needed to. Especially the bond the siblings from the kdrama shared with their mother was absolutely touching. Spoiler Alert: Even when it was revealed that Seri had faked that she went to Harvard University, Seo Joon and Ki Joon, who were victims of their dad’s anger, knew why she felt she had to lie about her failure. The kdrama follows the mothers of the prestigious Sky Castle, understanding that their way of educating their children is very toxic. Go on a thrilling and exciting ride and watch SKY Castle exclusively on Rakuten Viki.