There is no doubt that Cha Eun Woo singer, actor and Korea's heartthrob gives us the most amazing rom-com. 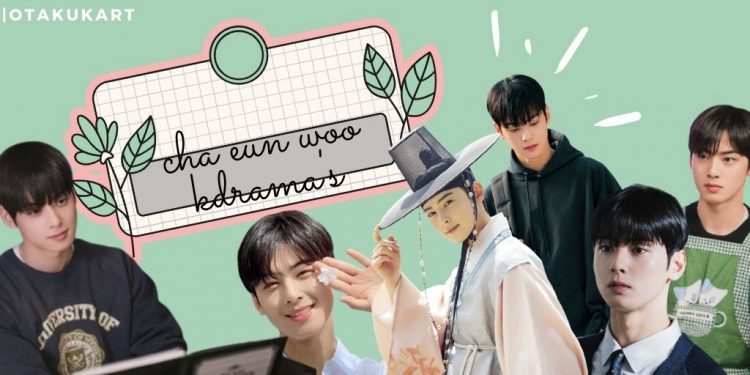 Cha Eun Woo kdramas always serve as a happy pill for when you need a serotonin boost. Furthermore, Cha Eun Woo born as Lee Dong Min is just twenty-four years old. Despite being of such a young age, Cha Eun Woo is an accomplished singer, model, and actor. He is one of the six members of the fantastic boy group, ASTRO, under Fantagio entertainment. Furthermore, Cha Eun Woo skyrocketed to popularity thanks to his perfect visuals. Every character that Chan Eun Woo has played raises the standards for all other male leads. Kdrama fans believe that Cha Eun Woo is the one who started the phenomenon of the sweet tsundere boyfriend in Kdramas.

Not only does this man have greek god visuals but Cha Eun Woo also has an IQ of 142. Cha Eun Woo makes us think that God really does have favorites. Moreover, Cha Eun Woo’s impeccable acting has brought him MBC Excellence Award for an actor.  Due to his high intelligence and looks, Cha Eun Woo has lovingly gained the nickname ”Genius Face” by his fans and the paparazzi. In this article, we will be providing you with a list of the best Cha Eun Woo kdramas and movies.

Soul Plate will always be one of our favorite Cha Eun Woo kdramas. Not only does it have Cha Eun Woo as the main lead but all the other ASTRO members are also present in this drama. In this heartwarming kdrama, ASTRO members run are angels who are responsible for running a restaurant. They serve food and offer consolation to those who come to this restaurant.

Furthermore, Cha Eun Woo shares sugar-sweet chemistry with the beautiful actress, Sol Bin (Backstreet Rookie). Although the main focus of the drama was to promote the boy band, the message of the show and all the supernatural elements will make you fall in love with it.

Top Management is one of Cha Eun Woo’s funniest kdramas. Furthermore, this is a sixteen-episode long webtoon that is based on an internet novel. This webtoon is based on a manager in the kpop industry. She makes any group under her a major hit. But what people don’t know is that she has supernatural abilities to look into the future. The drama aired from the 31st of October in 2018 to the 16th of November.

This will be one of the best idol-manager romantic comedies that you will ever get to see. Apart from our handsome Cha Eun Woo, this kdrama also consists of Ahn Hyo Seop (Lovers Of The Red Sky), Seo Eun Soo (Missing: The Other Side), a.mond, and Jung Yoo Ahn (Come And Hug Me).

Rookie Historian Goo Hae Ryung is Cha Eun Woo’s only historical kdrama so far and to no one’s surprise, it is also one of the most enjoyable kdramas. Furthermore, this sageuk aired on MBC from July 17, 2019, to September 26, 2019. Kim Ho Soo (Solomon’s Perjury) is the screenwriter of this beautiful kdrama. The talented, Kang II Soo (Jeon Wo Chi) and Han Hyun Hee (Imitation), came together to direct this drama. Over the course of twenty episodes, the series tells us about a determined girl named Goo Hae Ryung who wants to prove through history that everyone is equal. Apart from an amazing storyline, the drama also consists of talented actors like Shin Se Kyung (Black Knight: The Man Who Guards Me), the beautiful Cha Eun Woo, Lee Ji Hoon (River Where The Moon Rises), and Park Ki Woong (You Raise Me Up).

This drama is set back in the Joseon era, where females were not allowed to write historical records. Goo Hae Ryung, a determined and hard-working girl is getting ready to become a palace historian. But with the stereotypes that the society against women, it was going to be a rocky road for Goo Hae Ryung. However, she does not shy away from the hardships and decides to take slow yet steady steps towards her goal. Goo Hae Ryung also catches the attention of the handsome prince Prince Yi Rim. Despite being a historical drama, the series will make you laugh out loud every single second. Cha Eun Woo has done a spectacular job in this drama. You will be shocked to see how despite being a historical kdrama, the show highlight issues like vaccination and female liberation. You can stream this delightful Cha Eun Woo kdrama on Netflix.

2. My ID is Gangnam Beauty

With My ID is Gangnam Beauty, Cha Eun Woo took the crown of being the best boyfriend. Furthermore, this series is also one of the best subtle takes on toxic beauty standards and bullying. A splendid readaptation of ”My ID Is Gangnam Beauty” the webtoon, directed by Choi Sung Bum (More Than Friends, Orange Marmalade). Furthermore, the beautiful storyline of this drama is all thanks to Choi Soo Young (Cunning Single Lady, 7 First Kisses). The main cast of the drama includes amazing actors like Im Soo Hyang (When I Was The Most Beautiful, Graceful Family), Cha Eun Woo, Jo Woo Ri (To All The Guys Who Loved Me, My Healing Love), and the amazing Kwak Dong Yeon ( It’s Okay To Not Be Okay, Vincenzo).

Over the course of sixteen episodes, the drama tells us about the journey of Kang Mi Rae realizing that is the beauty inside that matters the most. Bullied mercilessly in her childhood days for her looks, Kang Mi Rae loses all ounce of confidence. However, both she and her mother decide that Kang Mi Rae will get plastic surgery on her face so that she does not get bullied anymore. She joins university as a new person. The girl who used to be bullied for her looks was now considered to be one of the ”pretty” girls. My ID Is Gangnam Beauty subtly brings to light how much people judge based on a person’s looks. The name ”Gangnam Beauty” is used as an insult for someone who has gotten plastic surgery. Cha Eun Woo’s character in this drama, Do Kyung Suk, is a rarity to find not just outside but even in kdrama land. Furthermore, he does not care about people’s appearances and helps Kang Mi Rae regain her confidence. You can watch this romantic, funny, and insightful kdrama on Netflix, WeTV, Rakuten Viki, and Apple TV.

Undoubtedly Cha Eun Woo’s best and most popular kdrama is True Beauty. True beauty has made a lot of buzz last year. There was no one who didn’t know about the complicated love story of Lee Su Ho, Han Seo Jun, and Lim Joo Young. Cha Eun Woo bedazzled the international audience as Lee Su Ho in this kdrama. Also, True beauty must have been the kdrama that had introduced the international audience to the man named Cha Eun Woo. The whole world was in love with Lee Su Ho and got butterflies even with the littlest interactions.

The romantic high school drama is based on the ideology of true beauty. A girl named Lim Ju Gyung, who was badly bullied just because she didn’t look pretty, transforms herself with make up. Contrary to her past, Ju Gyung is now one of the most popular kids in the school. But she is afraid of revealing her bare face to anyone. The kdrama follows her learning more about how someone’s looks don’t find them but their personality does. If you still haven’t watched this kdrama, get up and give it a try on Rakuten Viki or Amazon Prime Video.