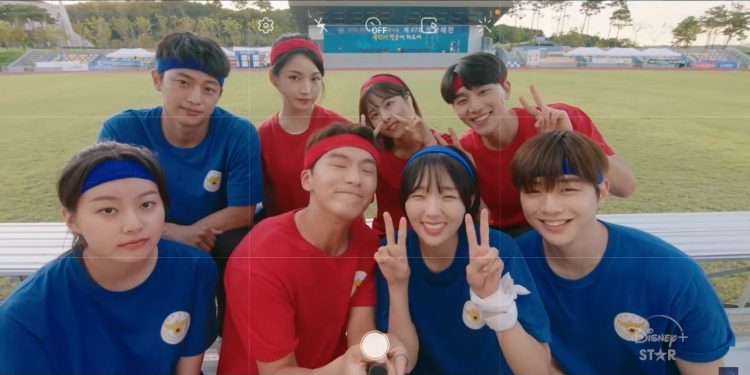 Kang Daniel and Chae Soo Bin are all set to transform into police academy students in the upcoming drama, Rookies or Rookie Cops. The forthcoming drama revolving around Youngsters will air on Star via Disney+, marking it OTT’s first Korean Star originals. The Disney+ original streaming series has recently unveiled a new teaser and poster for Rookies Kdrama. And, the fans are already mesmerized by the trailer and Kang Daniel’s charming visuals. The Kpop idol is making his TV debut with Rookies. Hence, his fans are extra excited about the streaming television series.

Rookies will depict the story of young students born in 2000 who will explore their lives at the most conservative university in Korea. The education system in South Korea is hugely complex and challenging. Rookies or Rookie Cop will majorly focus on the students’ growth, love life, goals, and ambitions. Also, the exceptional ways these students will adopt to stand out in a 2000 student campus will be shown.

The drama has already finished filming. However, the fans still have to wait for the premiere date. Nevertheless, enjoy the first teaser and look further at the article’s drama.

The cast of the upcoming Disney+ Star streaming television series, Rookies, is everything an eccentric and thrilling plot requires. Kang Daniel will make his big acting debut and play Wi Seung Hyun on the show. Seung-Hyun is a passionate youngster who cannot see injustice happening. Also, he wants to become like his father, the head of the Gyeonggi Dongbu Police Agency.

Chae Soo-bin is playing Go Eun-Gang, an energetic and outgoing freshman at the police university, chasing an unrequited love. Eun-Gang joined the academy despite getting rejected.

Lee Shin Young will take on the role of Kim Tak, a junior from the national judo team, and embraces the passion and spirit of youth. Kim Tak was destined to be alone until he met Wi Seung Hyun, who became his one true friend.

Park Yoo Na will play Ki Ha-na, another realistic freshman and possesses natural charm. Due to her liking towards individuality, she finds it hard to coordinate with other students.

The eight freshmen joining the police academy appear with broad smiles in the latest poster. Excitement and fun are visible, while the tagline reads,  “The true class of these hopeless youths begins now.”

Besides the poster, a teaser was also released by Disney+. The clip displays the eight students and their hilarious yet strict lives at the Police academy. The students can be seen adjusting to their new lives, as they make rookie mistakes and frequently cracks up the scene.

The teaser showcased all of them deeply immersed in their characters while they tried to keep up with each other as a group. Rookies teaser showcased the friendship, fun, and growth, which the fans will get to witness in the drama.

The teaser ends with the eight of them taking a selfie. Also, a teaser voice says, “Let’s not change our friendship; we’re sticking together until the end!” indicating the romance and friendship that will evolve in the drama.

The production crew of Rookies shared that the drama is a rom-com showcasing the youth and growth of the eight freshmen at the Police Academy. Furthermore, they will display amusing personalities and development in the drama.

Rookies does not have a release date at the moment. However, the streaming television series will be broadcast in the first half of 2022. As per sources, the drama had already finished filming in November 2021. Thus, you can expect it to air as early as possible.

How did you like the brand new teaser for the upcoming Kdrama, Rookies?