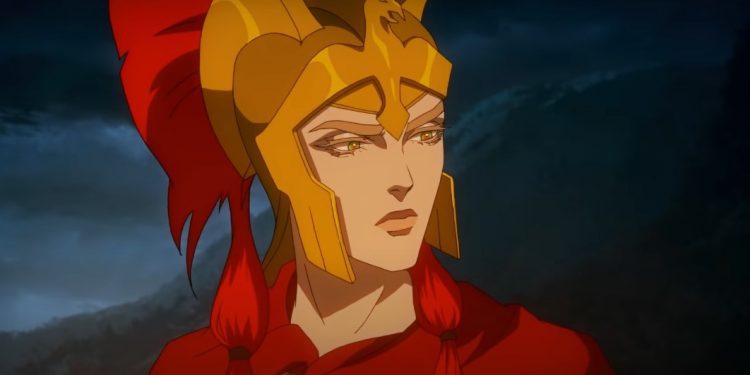 Of the many deities that the original Netflix Anime presents in this series, today, we bring you the top 10 Blood of Zeus characters ranked. If you’re not familiar with Blood of Zeus, it is an adult-oriented animated show developed by Vlas and Charley Parlapanides under Powerhouse Animation Studios. Secondly, this show debuted on the streaming giant back in late 2020, and it seems it will have five seasons. And it already has two on the platform.

The premise of this show is set on the vast world of Greek mythology. Firstly, we see how demigod Heron goes about the universe trying to save planet earth and Olympus. The show’s Greek aesthetics is prominent everywhere, the drawings are impeccable, and the stories take some inspiration, although not literal ones, from the Greek mythology canon. So, which characters are the toughest? Come with us here at Otakukart to find out!

To begin, Blood of Zeus is the kind of show that brings us to the Greek Pantheon. So, before you get all nerdy-bookwormy with me, consider this. All of these characters are hyped, overpowered, and are superstrong. After all, they’re gods and demigods. Moreover, they’re based upon the earliest canons of the excellent classic Western literature and mythos. Also, each of these characters has a special trait, skill, and element that gives them an edge in battle and life. It’s kind of like an RPG-esque feature that the producers wanted to put out there. So, from the heights of Olympus, let’s start off showcasing this wide array of deities.

10. The Goddess of the Hunt: Artemis

Although Artemis, Goddess of the Hunt and of the Moon doesn’t get a lot of showtime in this series. She is a very powerful character. Firstly, she’s Apollo’s twin sister, and if that’s not a big credential. Hadn’t it been for her temper, Zeus wouldn’t have reconsidered his stance when Hera confronted him. She has a unique dexterity with the bow and arrow. And if we consider that there are five seasons of Blood of Zeus, maybe we will see more of her in the future. That’s why she’s currently at the bottom of the list.

9. The God of Fire & Forges, Hephaestus

Thanks to Hephaestus and his fiery forge, every single warrior on the battlefield under Zeus’ banner can be a deadly force. Also, in the Blood of Zeus universe, every item that characters wield is a very fundamental tool that can help them gain an advantage in the field of battle. It’s kind of an RPG lore sort of thing. After all, it was the design of Hephaestus’ gauntlet that gives the edge during the giant’s battle. Also, if you play RPGs, you know that having a weapons crafter on your side is a plus in every single aspect.

8. The Goddess of Knowledge & Wisdom: Athena

Athena is the deity representation of knowledge, wisdom, warfare, and strategy. Her skills in the battlefield are unlike any other. And regrettably, she doesn’t get enough screen time in these seasons. But rest assured that given her powers and her transcendence in the Greek mythos, she might have some impact in the future. After all, her knowledge makes Hera get close to the throne.

Apollo’s handsomeness is as great as his might. For starters, his stature as the sun’s deity gives him the ability to use fire abilities like no other. While Hephaestus can use fire and forges, he’s no rival to what Apollo can do with fire. Secondly, Apollo rides a chariot pulled by two mighty fire horses. Moreover, when he’s really angry, he can make fire rain upon his foes. And he can swing his sword and chop up and hack away. In sum, like the meme says, “he protects, he attacks, and he range”.

6. The Goddess of Law: Demeter

Demeter is the goddess of law and harvest. We don’t see her a lot in Blood of Zeus. And she doesn’t speak at all. She is one of the eldest deities of Olympus. Also, when the hostilities broke out, she sided with Hera. And that’s understandable because Zeus broke his own principles. Despite we don’t see a lot from her, she can make plants grow and can control nature in unimaginable ways. Hopefully, the producers will make her talk and showcase her powers in the upcoming seasons. Because the Greeks would make great feasts in her name during the harvests to celebrate all the good things that the Earth gave.

5. The Harbinger of the Gods: Hermes

Hermes is a messenger from the Pantheon of the Olympus. His role is to deliver information from point A to point B. To do so, he relies on his incredible speed. Firstly, Hermes has winged boots and a cunning dexterity that gives him the edge on any battlefield. That’s why his fast speeds allow him to make a whirlwind that makes Hera’s army stop in their tracks. He’s so fast he even stroke the God of War during sparring. And that, my friends, is fast.

The god of war demonstrates that he is capable of defeating all gods except those from the elder. In fact, Ares, Zeus, and Hades are also the only gods shown to have killed one of the grey beasts during the original war against the giants, putting the god of war in exclusive company. Throughout the series, Ares brandishes a hammer with lethal results. On several occasions, he proves his mettle in battle by confronting and defeating both Apollo and Hermes at the same time.

3. The Goddess of Marriage: Hera

Except for Zeus, everyone respects and fears the usurping goddess. This fear is proof enough of Hera’s power, but it doesn’t stop the makers of Blood of Zeus from trying to demonstrate Hera’s powers. The goddess of marriage nearly takes Olympus from Zeus by using her ability to levitate items with her thought and the ability of shapeshifting. She would have defeated the god of thunder if she hadn’t made the fatal mistake of pledging the seas to the giants, angering one of her most powerful allies.

2. The God of Seas and Oceans: Poseidon

Poseidon isn’t given much screen time in Blood of Zeus to demonstrate his abilities, but the final fight gives audiences a taste of his power. Poseidon’s mastery of water rivals that even for the most powerful water bending anime personalities. When confronted with the law by Zeus in the third episode, the gods are fortunate to have Poseidon on their side. So when King of the Gods continues to threaten them, Poseidon keeps him back, showing his power without ever throwing a punch.

When Hera decides to confront Zeus on Mount Olympus after discovering that he has broken his own rules, Zeus is so self-confident that he well almost initiates a fight with seven of the most powerful beings in existence. His command of the sky and prowess of lightning makes him a formidable foe who must be feared. Hera was well aware of her husband’s power and made certain to confront him with the assistance of others, perhaps uncertain of her own ability to defeat the titan killer.

Where to Watch Blood of Zeus?

If you want to watch Blood of Zeus, then Netflix is the place to go. Firstly, Netflix is a globally available platform. Secondly, “Blood of Zeus” is a Netflix Original Anime. Consequently, you won’t find it anywhere else. So, don’t bother looking in Funimation, Crunchyroll, Hulu, or Amazon Prime Video. This series is exclusive to the streaming giant. And for a very accessible price, you can get it virtually on any device. With this, we conclude our coverage of the best deities of Blood of Zeus here at Otakukart. Thanks for reading our article. And please keep coming back to our website for daily updates on all your favorite animes, shows, series, and movies.

Also Read: Blood of Zeus Season 2: Focus to Shift on Hades – Everything We Know So Far

Awkwafina Is Nora From Queens Season 3: Is It Renewed or Canceled?