Get to know the drop-dead gorgeous cast of Snowdrop! 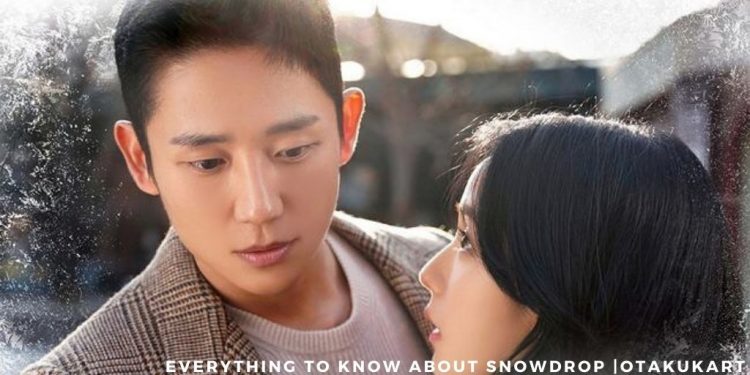 From the cast, storyline, to the beautiful cinematography, everything about Snowdrop is splendid. Even before its premiere, this kdrama had fans waiting in lines due to the truckload of megastars that the Snowdrop cast consists of. Moreover, Snowdrop is Disney+ Hotstar’s first exclusive kdrama. To add to the list of praises, the masterminds behind the creation of Snowdrop are Yoo Hyun Mi (The Bridal Mask) and Jo Hyun Taek (Mirror Of The Witch). The last time these two powerhouses collaborated, we were blessed with the legendary kdrama ‘SKY Castle’ in 2018, whose storyline and characters still live in our minds rent-free. Additionally, Snowdrop is set up back in 1987.

What happens when Young Ro, a kindhearted and innocent university student, finds a bleeding young man in her dorm room the very same night that the police are hunting down a North Korean spy? Multiple breakdowns, an endless cat and mouse chase, and an unexpected romance ensue. Fun fact, Yoo Hyun Mi, the brilliant screenwriter of  Snowdrop, has been perfecting this story for over twelve years. Snowdrop has a splendid cast, a well-known crew, and has been polished to perfection. Now that we have convinced you enough let us tell you all about Snowdrop’s cast and where you can watch this amazing kdrama.

Snowdrop: Get To Know The Brilliant Cast

This kdrama’s cast will make you starry-eyed. Thanks to its popular cast, Snowdrop has been the topmost awaited kdrama for a whole year. The only way you would not about Snowdrop is if you have been living under a rock. It has Blackpink’s Jisoo, Jung Hae In, and Yoo In Na, for God’s sake. Furthermore, Snowdrop will be telling a complex story that takes place in troublesome times. Every single character has layers and motives and will be contributing greatly to the storyline of Snowdrop. So without further ado, let us tell you about the great cast of Snowdrop.

Jung Hae In as The Mysterious Im Soo Ho

The main cast of Snowdrop is none other than the talented Jung Hae In. It is no secret that Jung Hae In is a master at portraying complex characters whose actions speak louder than words. In Snowdrop, Jung Hae In plays the role of Im Soo Ho. Furthermore, his character is being chased down by officials because they believe he is a North Korean spy. While trying to escape, he somehow ends up in Young Ro’s room with a gunshot wound.

Despite all the chaos surrounding his life, Im Soo Ho finds himself falling for Young Ro. Jung Hae In, with his roles in Something In The Rain, One Spring Night, and the few moments that he appeared in Goblin, has proved that when he’s on-screen, he shines the brightest. Fans cannot wait to fall in love with him again as Im Soo Ho.

Blackpink’s Kim Ji Soo is a natural in front of the camera. We have seen her acting abilities through her guest appearances in music videos and various shows. Ji Soo’s presence in Snowdrop is going to take the drama to another level. Furthermore, this is Ji Soo’s first main role in a kdrama, and understandably fans cannot keep calm. The director of this magnificent kdrama, Jo Hyun Taek, revealed that he refused to give such a significant role to a rookie actress. But that was only before he met Kim Ji Soo, the all-rounder. Her character in Snowdrop goes by the name Eun Young Ro.

Furthermore, Eun Young Ro is a girl with such purity and kindness that she literally glows. Her good nature and willingness to help others have earned the name ‘Sunshine of Husu University’. When she sees Im Soo Ho injured and helpless, she is reminded of her brother and risks her life to nurse him to safety. And while she carefully nursed Im Soo Ho back to health, she fell in love with him. Fans are excited to see how Eun Young Ro is going to come when she finds out who Im Soo Ho really is.

Another amazing member of the Snowdrop cast is Lee Kang Moo. His character in Snowdrop is Lee Kang Mo, The National Security Agency’s First Department Team Leader. After coming from Germany, he is dead set on catching Taedong River 1. Although there is no significant evidence, he thinks that Im Soo Ho is Taedong River 1. Lee Kang Moo is determined to catch Im Soo Ho at all costs. Additionally, his role is perfectly portrayed by Jang Seung Jo, which is a given if you have seen his work in The Good Detective, Familiar Wife, and My Son In Law’s Woman.

Yoo In Na as the mysterious Kang Cheong Ya

The cherry on the top in Snowdrop is definitely Yoo In Na. Let’s be honest, just Yoo In Na’s presence is enough to make us watch the kdrama. However, to make things even better, Yoo In Na will be playing a mysterious character named Kang Cheong Ya. She is the mistress of Nam Tae Il, who is the Secretary-General of the Democratic AEMIN Party.

But she isn’t just any mistress, Kang Cheong Ya is the mastermind behind Nam Tae II’s successful career. Although she acts innocent and unbothered, Kang Cheong Ya is harboring a deep secret. Yoo In Na has proven her acting supremacy with popular kdramas like The Spies Who Loved Me, Touch Your Heart, and Goblin.

Undoubtedly, Kim Hye Yoon’s career skyrocketed when she played the role of Ye Seul in one of the most iconic kdrama that is SKY Castle.  Ever since then, fans have been loving the actress. Literally, each and every character that she has ever played has been permanently imprinted in the minds of kdrama fans. Also, last year in 2021, Kim Hye Yoon took a rest from dramas and had only done cameos in some k-series.

However, the talented actress is finally back with Snowdrop playing the role of university dropout Kye Bun Ok. Kye Bun Ok works as a spy for the strict housemaker and is hated by most of the students in the university. The only person she feels that she can talk to is Young Ro. But the question is will Kye Bun Ok help Young Ro in hiding So Hoo or will she tip them off?

The talented actress, Yoon Se Ah, has made her comeback with Snowdrop. Yon Se Ah is popularly known as No Seung Hye, one of the powerful women of SKY CASTLE. However, his character will be quite different from the roles she has played. Pi Sung Hee is a woman who wants everything to go by the book. The students of Hosu Woman’s University are death scared of her. If someone doesn’t follow the rules so have set, things won’t turn out well for them. She even keeps Kye Bun Ok, the dormitory telephone operator, under her wing. But what no one knows is that Pi Sung Hee had survived a tragic past that has been yet to be revealed!

Known as Song Hae Rin from Romance Is A Bonus Book, Jung Yoo Jin has been taking over the hearts of almost everyone. After taking a two years rest from acting in kdramas, she has returned strong as ever as Jung Han Nah in Snowdrop. Jung Han Na is a fearless and hot0temepred who usually acts on her impulses. She found herself as an agent for the National Security Agency while looking for her long-lost love. Fans are looking forward to seeing what kind of role Jung Yoo Jin’s character will play in the plot of Snowdrop!

Where To Watch Snowdrop

The Korean fans of the kdrama can watch the episodes of Snowdrop on JTBC. It airs new episodes every Saturday and Sunday at 11:30 PM KST on JTBC.  You could also watch  Snowdrop on Disney+ Hotstar. Sadly Snowdrop in Disney+ is available in only some lucky countries such as South Korea, Malaysia, Indonesia, Thailand, Hong Kong, Singapore, Australia, and New Zealand. Also, the release time of Snowdrop in Snowdrop is 7:00 PM in India, 8:30 in the United States, 1:30 PM in the United Kingdom, 12:30 AM in Australia, and 8:30 AM in Canada. Know that you know everything about Snowdrop, don’t forget to mark your calendars for it!

Also Read:  Jung Hae In Kdramas That You Should Give A Try Before Snowdrop

How Did Gyutaro and Daki Become Demons? The Tragic Backstory of Demon Siblings