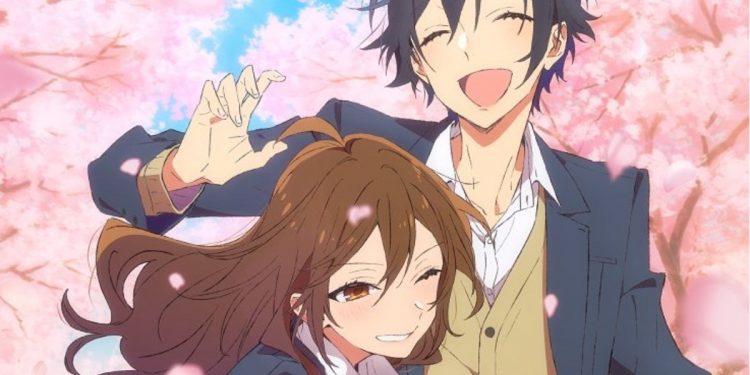 If you enjoy romantic dramas and want to experience a roller coaster of emotions, this anime is for you. We’ll go through some of the most prominent anime couples that people ship. Horimiya, also known as Hori-san and Miyamura-Kun, is an anime adaptation of the Horimiya manga series by HERO and Daisuke Hagiwara, as well as the Hori-san to Miyamura-Kun webcomic by HERO. CloverWorks, an animation company, developed the anime, which premiered on January 10, 2021. On September 21, 2020, the first promotional trailer for the anime was published, featuring Kyouko Hori and Izumi Miyamura. A second promotional video featuring Yuki Yoshikawa and Tooru Ishikawa was released on October 19, 2020, while a third promotional video with Kakeru Sengoku and Remi Ayasaki was released on November 2, 2020. On December 21, 2020, a last promotional video was released.

Kyouko Hori, a high school girl who is well-liked at school for her cheerful demeanor and academic achievements, has been concealing a darker side. Hori is forced to look after her younger brother and handle the chores because her parents are frequently abroad at work, leaving her with no time to make friends or interact outside of school. Izumi Miyamura, on the other hand, is portrayed as a moody otaku who wears spectacles. He is a kind person who is awful at learning in reality. He also has a tattoo on his back and left shoulder, as well as nine piercings concealed beneath his long hair. Hori and Miyamura meet outside of school by chance, none of them expecting the other. These seemingly diametrically opposed individuals become fast friends, revealing an aspect of themselves with each other that they have never revealed to anyone else.

Hori considers Miyamura to be a wonderful friend who is always willing to provide a hand, and she visits her at her home to assist her in caring for her brother Souta Hori. He also genuinely cares for Hori, as evidenced by the fact that he skipped school to assist her in purchasing eggs. She appears to be rather possessive about Miyamura, as evidenced by her shrieking at Remi Ayasaki in Chapter 11 “No, it is not true! I’ve got him! You’ll never be able to take him away from me! In no way! “When Ayasaki asked whether Miyamura could be her boyfriend, he said yes.

When it comes to Miyamura, she might be a jealous person. When other ladies approach Miyamura with love intentions, she transforms into an “ice queen” persona, according to Tooru Ishikawa and Yuki Yoshikawa. When she sees Honoka Sawada approaching Miyamura, she becomes furious with her. When it’s revealed that Hori is the one Sawada likes, she warms up to her and even invites her to her house, to Miyamura’s chagrin. When Miyamura was besieged by numerous females and her mechanical pencil and ruler were broken in Chapter 15, she was visibly irritated.

While she is in bed with a fever, she hears him unconsciously declare his feelings. She does not reply, however, since she is concerned that approaching him to clarify what she heard may jeopardize their existing connection. When her father asks if she is dating Miyamura after his visit, she affirms that she is. Hori and Miyamura appear to have gotten closer since their verified connection was revealed. Hori was the one who fought Miyamura’s bullies and pretended to be cute while watching horror movies. Beginning in Chapter 37, it is revealed that they had slept together. Hori adores being mistreated and will only allow Miyamura to do it to her, revealing the depth of their connection.

She tells Miyamura she still wants to be with him as the realization settles in that they could be separated after their final year of high school. In turn, he approaches Hori and begs for her hand in marriage. They are currently involved in the manga. Miyamura and Hori marry and have a kid called Kyouhei Miyamura at the webcomic’s conclusion.

Toru’s affections for Kyouko are plainly displayed at the beginning of the series. He even went so far as to be unfriendly to Izumi Miyamura at first, but they later became good friends. Despite Hori’s rejection of Toru when he confessed to her, the two maintained a strong and lasting relationship.

Hori’s pal Yoshikawa is a member of her friend group. Although she has no idea what Hori is like at home, the two are quite close and frequently turn to one another for counsel (her secret). She once observed Hori strolling down the street with Izumi Miyamura and inquired about it. Hori lied when he said he was her cousin. Despite this mistrust, Hori is seen to occasionally assist Yuki. Hori demonstrated this by encouraging Yuki to continue cooking (despite the fact that it may taste terrible) and supporting Yuki in convincing Tooru Ishikawa to pretend that they are dating.

Also read: Horimiya Manga to Have an Epilogue Chapter in July.