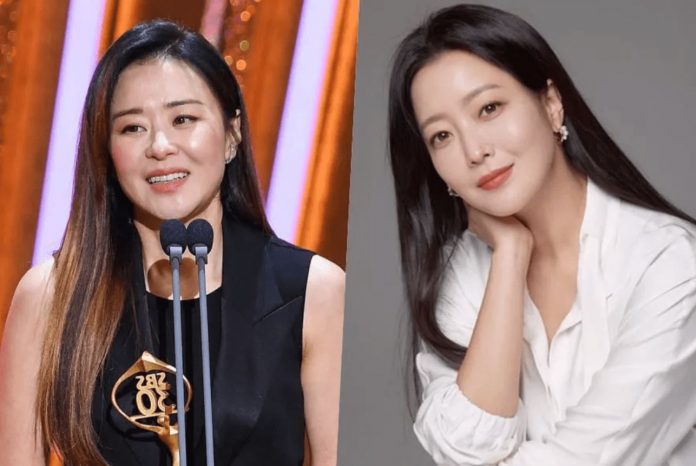 Choi Kang Hee is one of the best actresses in the South Korean entertainment industry, and she has given us some amazing k-dramas. Making her debut with the high school drama “The New Generation Report: Adults Don’t Know” in 1995, the actress will soon be completing her third decade in the industry. Not limiting herself to just acting, Choi Kang Hee has also been a radio DJ on KBS Cool FM.

She even has her own clothing brand and a photo essay book titled “Choi Kang-hee, A Little Child’s Little Happiness” to her name. With Choi Kang Hee playing the female lead, we’ve been able to relate to her a little too much. And her staying out of controversies most of the time is also a reason for her being a fan favorite. Currently, the actress is spending her time out of the limelight.

So here’s a look at some of the best k-dramas that Choi Kang Hee has starred in!

The 2015 k-drama stars Choi Kang Hee alongside ‘Goodbye, Solo’ fame Chun Jung Myung and ‘Weightlifting Fairy Kim Bok Joo’ fame Lee Jae Yoon. ‘Heart To Heart’ is one of the best romance k-dramas out there and has Choi Kang Hee’s best performance. The actress plays the role of Cha Hong Do, a girl who suffers from social phobia and has a problem with severe blushing. The story follows Cha Hong Do as she fulfills most of her needs through the internet and her grandmother.

When her grandmother died, she had no option but to go out into the world to survive. Disguising herself as an elderly woman, she starts working as a maid. But when she runs into Ki Yi Seok, a psychiatrist, her life changes. ‘Heart To Heart’ has perfect writing with no loopholes in the plot. From the execution to the actors, everyone did justice to the story. ‘Heart To Heart’ is a must-watch for the ones who are suckers for rom-com. ‘Heart To Heart’ has 16 episodes in total, with each Episode having a runtime of 60 minutes.

Released in 2021, Choi Kang Hee’s latest k-drama, ‘Hello, Me!’ made fans fall in love with her once again. Kang Hee played the role of Ban Ha Ni, a single 37-year-old woman. Having a timid nature, Ban Ha Ni’s life wasn’t easy for her. The story follows as Ha Ni meets her teenage self, which leads her to make decisions to change her life. Leading a miserable life with a temporary position at work and no security or a partner in life, Ha Ni looks at how different she was at the age of 17. Looking at who she used to be, Ban Ha Ni decides to start over at the life she almost gave up on.

Choi Kang Hee stars alongside ‘The Secret Life of My Secretary’ fame Kim Young Kwang. Her character Ban Ha Ni’s younger self is played by Lee Re of Hellbound fame. ‘Hello, Me!’ is a fluffy rom-com that focuses more on life, with love being a little part of it. While the k-drama does have cliches and tropes, plot holes, and a mixed bag of characterization, ‘Hello, Me!’ still feels like a heart whelming hug one might need on a rainy day alone. ‘Hello, Me!’ has 16 episodes in total, with each Episode having a runtime of 1 hour and 10 minutes.

In the 2017 k-drama ‘Queen of Mystery,’ Choi Kang Hee stars alongside ‘Medical Top Team’ fame Kwong Sang Woo. Playing the role of Yoo Seol Ok, Choi Kang Hee gave the fans one of her most unexpected performances. The story of ‘Queen of Mystery’ follows Yoo Seol Ok, a girl who dreams of becoming a police officer for her entire life. And one day, her dream does come true. The housewife-turned-investigator meets the person who’d change her life. Meeting Ha Wan Seung, a passionate detective, Seok Ok gets the chance of her life. Teaming up with Wan Seung, the duo goes on to solve a lot of cases together.

‘Queen of Mystery’ went on to become one of the fans’ favorites. Looking at how much the fans loved Choi Kang Hee’s k-drama, in 2018, ‘Queen of Mystery’ came back for another season. Now divorced and chasing her dream once again, Yoo Seol Ok returns with her favorite detective Ha Wan Seung to solve more cases. Both seasons have a very different feel to them. With profiler Woo Sung Ha joining the duo, the storyline changes a lot. Having 16 episodes in each season, ‘Queen of Mystery’ is worth a watch if in the mood for some action, comedy, and crime.

The 2011 k-drama ‘Protect The Boss’ is another one of Choi Kang Hee’s best k-dramas out there. Starring alongside ‘Kill Me, Heal Me’ fame Ji Sung, ‘Time Slip Dr. Jin’ fame Kim Jae Joong, and ‘Birth of a Beauty’ fame Wang Ji Hye, Choi Kang Hee does an amazing job playing the role of No Eun Seol. The story follows No Eun Seol as she goes through a hard time finding a job. After so many tries, Eun Seol finally gets a job as a secretary at a law firm. But with her boss being Cha Ji Heon, who is the immature youngest son of a chaebol family, her life doesn’t really get better. The real chase begins when Ji Heon falls in love with Eun Seol, and hell breaks loose.

Starting from the story and execution to the chemistry and the good combination of romance, comedy, and friendship, there’s everything in ‘Protect The Boss’. While it does starts with the usual cliche love story, ‘Protect The Boss’ also features an amazing friendship between the three women in the k-drama and a bromance to die for. Doing an amazing job, the writers gave the characters the development they needed as the story build-up. The k-drama also focuses on the major deal breakers in a relationship i.e. the circumstances. ‘Protect The Boss’ has 18 episodes in total, with each episode having a runtime of around 1 hour and 5 mins.

The 2020 k-drama stars Choi Kang Hee alongside ‘Oh My Venus’ fame Yoo In Young, ‘Here Comes Love’ fame Kim Ji Young, ‘While You Were Sleeping’ Lee Sang Yeob, ‘Class of Lies’ fame Lee Jun Young, and ‘Spring Turns To Spring’ fame Lee Jong Hyuk. Choi Kang Hee plays the role of Baek Chang Hee, who is an agent for the National Intelligence Service leading an amazing team. But as one of her subordinates passes away, she loses all her hope of returning to the field. Trying to start over, she starts working as a secretary for Ilkwang Hitech under the name Baek Jang Mi. She is soon joined by Im Ye Eun, a single mother who looks like a k-pop idol, and Hwang Mi Soon, a housewife of 18 years whose family believes her to be an insurance salesperson.

As the three women work together to start a new life and possibly a mission. But on the other side, Ilkwang Hitech’s CEO, Yoon Seok Ho, has doubts as his secretary looks a little too much like his first crush. Having a story a bit different than the regular k-dramas, ‘Good Casting’ received mixed reviews from the fans. Some fans called the k-drama amazing, while some called it pretty average. But one thing that all the fans pointed out was the bad romance plot. ‘Good Casting’ is good to watch if you are in the mood for a strong women-led drama. ‘Good Casting’ has 16 episodes in total, with each Episode having a runtime of 1 hour.