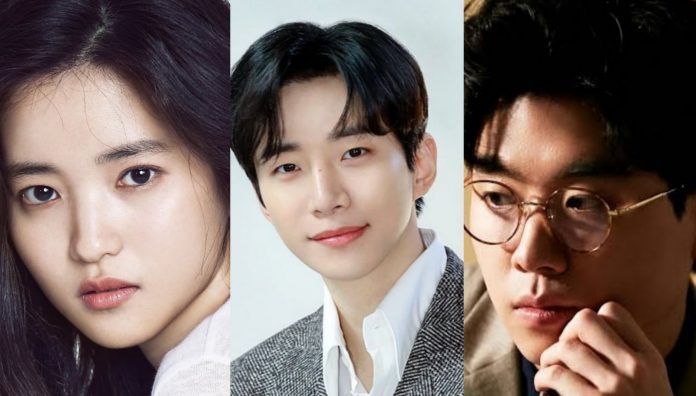 The 58th Baeksang Awards 2022 took place recently, and it was a star-studded event with winners all around. Considered to be one of the most prestigious awards shows in the field of television, films, and theatre in South Korea, it is also known as the Paeksang Arts Awards. The one who introduced the award and who was the founder of Hankook Ilbo newspaper had a nickname, Baeksang, hence the name of the award.

This article shows the entire list of The 58th Baeksang Awards 2022 winners who won our hearts with their performances. This year’s MCs were Shin Dong Yup, Bae Suzy, and Park Bo Gum. The artists adorned the red carpet raising the fashion quotient to a whole new level. So check out the list and see if your favorites are in it or not.

Let’s check out the list of the prestigious award winners this year:

Squid Game, the 2021 drama that shook the entire world with its presence, got the Daesang.

For the unversed, the drama revolves around the fact that individuals play childhood games to win an amount of ₩45.6 billion, however in exchange for a price if you lose – your life.

Nominees – D.P., Twenty-Five, Twenty-One,’ ‘Squid Game,’ ‘The Red Sleeve Cuff,’ and ‘Going to the Blue House Like This’

The South Korean drama D.P focuses on the lives of the people who go to fulfill their mandatory military services and why a number of them become defectors.

Ahn Joon Ho played by Jung Hae, is a private soldier who is sent on a mission to find out about the deserts and why some soldiers, without any official statement, go on leave.

Without a doubt, Kim Tae Ri was the star of the evening when she grabbed the award for Best Actor. She has previously been well known for the projects she has been a part of. However, it was Twenty-Five Twenty-One that boosted her fame to a whole new level. With a plethora of projects, she took part in dramas like Mr. Sunshine, Twenty-Five Twenty-One, and films like The Handmaiden and Space Sweepers, among others. In the 58th Baeksang Awards 2022, she also won the Baeksang Art Awards For The Most Popular Actor (Female).

In Twenty-Five Twenty-One, she played the role of a fencer. The drama is set at a time when South Korea was facing its economically struggling period. However, after crossing several obstacles, she became a part of the national fencing team. Along with the storyline, her chemistry with Nam Joo Hyuk was appreciated a lot. The drama gathered its share of applause though the audience shed tears when in the end, they both parted their ways in the drama.

Nominees – Kim Nam Gil for ‘Through the Darkness,’ Lee Jung Jae for ‘Squid Game,’ Lee Junho for The Red Sleeve Cuff, Im Siwan for Tracer, and Jung Hae In D.P.

Lee Jun Ho is not only an actor but also a singer and songwriter. Member of the boyband 2 PM, he starred in many films and dramas. At the 58th Baeksang Awards 2022, he won the award for the Red Sleeve Cuff, where he played the role of a young prince Yi San. Though he is ready for the throne, the way his father was killed still plays at the back of his mind. A strong-willed and free-spirited Sung Deok comes into his life, and he wants her to become his concubine. Though at first, she disagrees, she later agrees to the union.

Jun Ho also played a part in series like Good Manager, Confession, The Red Sleeve, among many others, and films like Memories of the Sword and Homme Fatale, to name a few. He won the Baeksang Art Awards For The Most Popular Actor (Male) in the 58th Baeksang Awards 2022.

Nominees – Lee Deok Hwa for The Red Sleeve Cuff, Lee Hak Joo for Going to the Blue House Like This, Lee Hyun Wook for Mine, Cho Hyun Chul for D.P.’, and Heo Sung Tae for Squid Game

Cho Hyun Chul is a familiar face in the kdrama industry. You have seen him in dramas like Hotel Del Luna, D.P, Inspector Koo, The Lies Within, among many others.

Kim Hye Jin has been part of dramas like Dr. Romantic, Rain or Shine, and Matrimonial Chaos, among many others. Not only in dramas, but she was also part of many films as well.

Nominees – Shin Seung Ho for D.P., Yoo In Soo for All of Us Are Dead, Choi Hyun Wook for Twenty-Five, Twenty-One, Tang Jun Sang for Racket Boys, and Koo Kyo Hwan for D.P.

Koo Kyo Hwan has been part of a plethora of movies and also web series like Monstrous, D.P among others.

Nominees – Miracle: Letters to the President,’ ‘Sewing Sisters,’ ‘Romance Without Love,’ ‘Kingmaker,’ and ‘Escape from Mogadishu’.

Set in real-life events, Escape from Mogadishu shows that during the Civil war, when both North and South Koreas wanted to be part of the United Nations, how the workers stranded in that situation escaped the conflicting scenario.

Winner – Lee Hye Young (In Front of Your Face)

Nominees – Go Doo Shim for Everglow, Park So Dam for Special Cargo, Im Yoon Ah for Miracle: Letters to the President, Jeon Jong Seo for Romance Without Love, and Lee Hye Young for In Front of Your Face.

For Variety shows , the winner was Street Women Fighter, no wonder as it was receiving so much love with nominees such as Kick A Goal’, Single’s Inferno,’ ‘Yoo Quiz On The Block,’ and ‘Transit Love’. From the category of Best Entertainer (Male), the award went to Lee Yong Jin from the list of nominations consisting of names like Kim Gura, Moon Se Yoon, Cho Se Ho, and SHINee’s Key. While in the case of the Best Entertainer (Female) category, Joo Hyun Young was the winner, with nominees being Song Eun Yi, Lee Mi Joo, Lee Eun Ji, and Hong Jin Kyung.