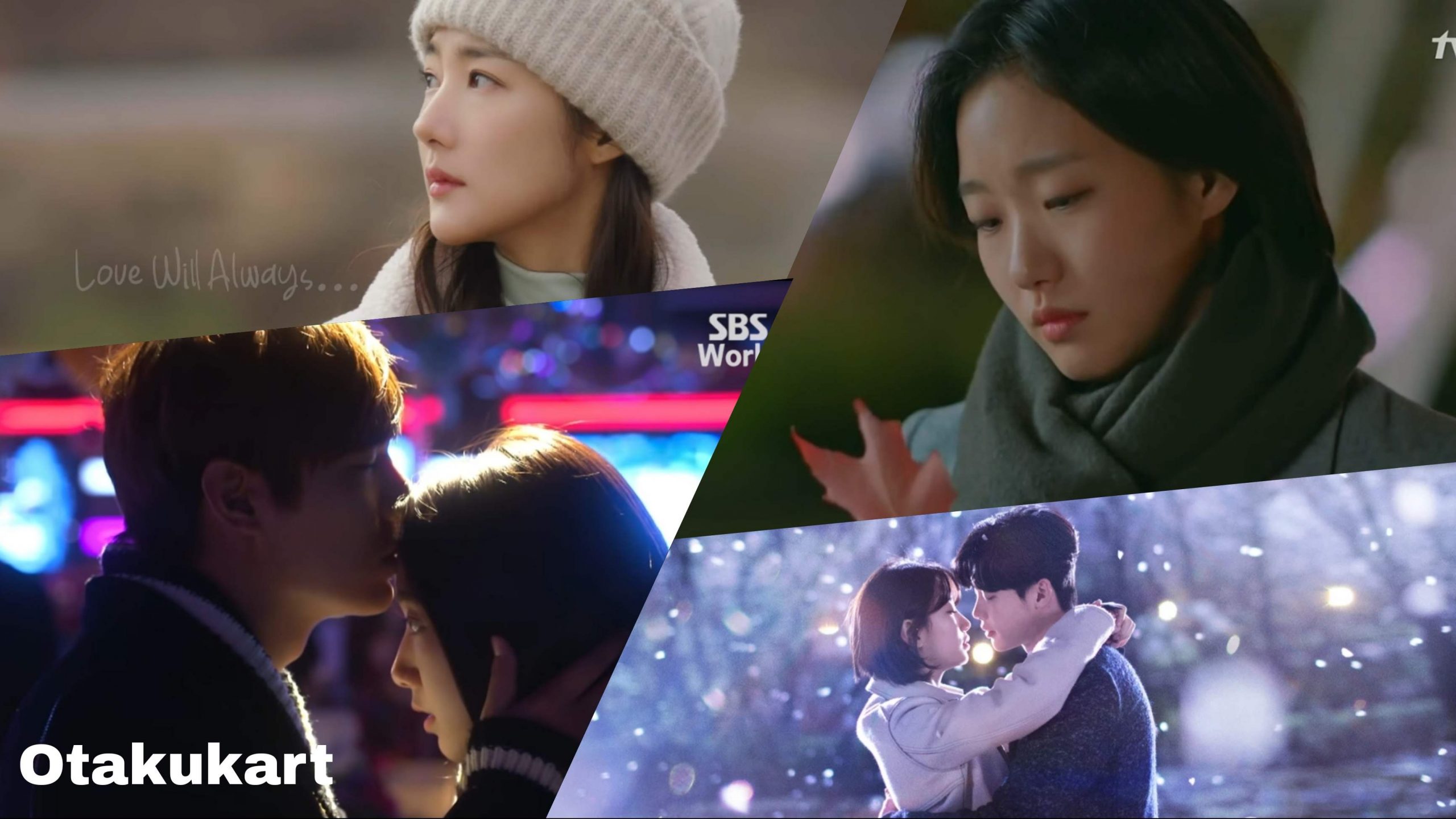 Christmas is just a few weeks away, and we genuinely hope you already have everything sorted out for the holidays. Spending time with family and friends, having a good laugh together, and dancing merrily to cheerful Christmas tunes— you deserve a much-needed relaxation at the year-end. However, if you are going to be away this winter from your home, that doesn’t mean you should sit back with a sulky face. You can celebrate your own kind of holidays this Christmas sprawled on your couch, wrapped in a blanket, accompanied by some good comfort food and an engaging selection of K-dramas!

We have listed out the top ten best K-dramas that you should watch this Christmas to make your day a little merrier! The series have been selected based on the cool winter setting and cozy warm feels that are perfect for this festive season. Happy reading!

Looking for an old-school drama this Christmas with a cliché but addicting storyline? ‘The Hiers’ starring Lee Min-ho and Park Shin Hye might be your pick! The story revolves around a group of teenagers attending the same high school, classified by the social position of their families. Kim Tan was sent away from Korea by his half-brother when he was fifteen to prevent him from meddling in the family business. However, when Kim Tan meets a poor girl from South Korea, Cha Eun Sang, he cannot help but keep falling for her in spite of being engaged to the daughter of a wealthy family.

He finally returns and realizes that Eun Sang’s mother has been working at his place while he was away. And now begins the epic, impulsive and passionate love story of the two while also being strangled with corruption and a love triangle.

Another classic K-drama of the last decade, ‘My Love from Another Star’ is a must-watch series that has beautifully managed to combine fantasy, science fiction, dark intrigue, romance, dark intrigue, and even slapstick entertainment. The dreamy setting and the attractive cinematography are definitely not going to disappoint you. The storyline revolves around an alien named Do Min Joon, who has arrived on Earth back in the period of the Joseon Dynasty, some 400 years ago but unfortunately, he couldn’t go back.

As an extraordinary being, Min Joon is blessed with superpowers that let him teleport, be super fast, and have advanced physical abilities. When his wait finally seems to be over, and he gets an opportunity to go back to his home planet, he comes across one of the most known Hallyu stars in Korea, Cheon Song Yi, and fails not to notice her. However, although the romance between two people from different planets is fancy, it isn’t as compatible as expected.

‘When the Weather Is Fine’ is a slow-paced K-drama with a slow-burn romance that focuses on healing and forgiveness, set mostly nearby a book store in the countryside. After spending years playing the cello in the city, Hae Won decides to move back to her hometown to spend a simpler life. She had lost her trust in people after getting traumatized emotionally when she was younger.

In the countryside, she comes across a book store owner named Eun Seob, who leads a very simple life of waking up, drinking coffee, reading books, and writing blogs. After meeting Hae Won, his life gradually begins to change as he realizes there can be far more interesting things in life than his life in the small book store.

There are a handful of reasons that make this drama really special, especially the cast. Marking the first drama of actor Park Seo-jun as the first male lead which caught the eyes of the netizens, ‘She was Pretty’ has a pretty basic storyline, but the sismance between the female lead Kim Hye Jin and her best friend, Min Hari, and the love triangles are definitely going to make you go crazy. The story follows Hye Jin looking like a beautiful angel as a young girl who had befriended a healthy-looking guy, Ji Sung Jun. However, as years passed by, both her good appearance and wealthy fortune faded away, and she ended up being a rent-free tenant at Min Hari’s house, working as a part-timer at a convenience store.

When Sung Jun suddenly sends her a message to get back in contact after years, Hye Jin, knowing how her old friend is unmatchable handsome now, sends Min Hari in her place to meet him. Although the meeting was supposed to be a one-time deal, Min Hari and Sung Jun kept crossing paths with each other while Kim Hye Jin ended up finding an internship with Sung Jun as her boss, who treated her with nothing but contempt. In case you are not yet convinced yet, Choi Si Won from Super Junior has played the character of the second male lead here, and he is literally everything you don’t want a second male lead to be: funny, unique, caring, smart, and mysterious!

When you don’t know which genre of K-drama to pick this winter, blindly go for ‘While You Were Sleeping‘. The drama revolves around a reporter named Nam Hong Joo who has been getting visions about people around her but has never been able to do anything to protect anyone’s life. However, when she comes across a prosecutor named Jung Jae Chan, she realizes he gets such dreams as well and can even change the upcoming events.

It is one of the most perfect fantasy K-dramas to watch this Christmas, with an engaging storyline and eye-catching leads. Not to mention the presence of everyone’s favorite, actor Jung Hae In as the honest police officer Han Woo Tak, who ends up joining their squad and getting involved with them too.

Read: Seven Times the K-Pop Girl Group Aespa Blew Us Away With Their Talent

It is exactly one year of the release of the popular webtoon-inspired K-drama, ‘True Beauty’ that surprisingly became a super-hit despite its plain and typical concept. Although it is a story about a poor and supposedly ugly high school girl falling in love with the handsome and smart hunk, the show still manages to deliver a number of beautiful messages hidden amidst the hilarious scenes. Lim Ju Gyeong ends up changing her school after being bullied all her life for her average looks and clumsy nature. However, this time, she refuses to let her appearance control her life and turns herself into a beautiful fairy using her makeup skills.

There she comes across the class topper, Lee Su Ho, who finds out about the secret of her bare face and agrees to hide it for her under his own conditions. She also keeps getting involved with the school bully, Han Seo Joon, who seems to be a friend-turned-enemy of Suho.

And we thought Hyun Bin and Son Ye Jin are just reel life couples but look who’s getting married! After showing undeniable chemistry as the sweet-savage couple in the popular Netflix K-drama, ‘Crash Landing on You,’ the two leads decided to tie knots and be each other’s Ri Jung Hyuk and Yoon Se Ri in real life as well. So this might be the perfect time for you to binge-watch the drama again!

The story follows a rich South Korean heiress named Yoon Se Ri, who ends up landing on the borders of North Korea after getting into an unforeseen paragliding accident. She coincidentally crosses paths with an army officer of North Korea, Ri Jung Hyuk, who agrees to keep her safe while she stays in his country and sends her back as well. However, the tension between the two countries bound them to come closer to each other and develop a strong bond.

Whether it’s five years past the release of this K-drama or a decade, ‘Goblin’ is forever gonna be iconic, and one of the best shows ever produced. It has everything starting from a perfect cast, the best chemistry and characters, top-notch cinematography, and great choice of location. Kim Shin, after being cursed as a general to lead an immortal life, has been looking for his bride for 900 years who would pull out the sword from his chest and end his immortality. Ji Eun Tak, a nineteen years old high school student, claims to be his bride since she has the capability to see ghosts.

Although Goblin gets the key to end his life, he finds his desire to live to rekindle when he falls in love with the innocence of Eun Tak. However, little did he know that his cursed life wasn’t supposed to end with happiness. A rom-com melodramatic fantasy, ‘Goblin’ touches subjects like love, family, and destiny that bind two or more people together.

The year 2016 was the golden year for the K-drama watchers as multiple memorable Korean series were produced and ended up occupying a huge place in our hearts. One of them is ‘Legend of the Blue Sea—’ a show centering on the love story of a mermaid named Shim Chung and a con artist, Heo Joon Jae. Despite an unusual first meeting and Joon Jae trying to fool her into giving away her jade bracelet to him, the two eventually get along owing to a turn of events.

However, their bond isn’t just based on coincidences but also an incomplete past story of which they are yet to know. While Shim Chung adapts herself to the new environment, she realizes that the world isn’t full of pure-hearted people like her.

Not everyone is a fan of happy-go-lucky stories, and if you are one of them, we totally get you. ‘That Winter, The Wind Blows’ is our tear-jerking K-drama recommendation for this Christmas, which narrates the tale of two broken people coming from two different worlds. Oh Soo, after leading a life full of suffering and pain, shuts off his feelings for anyone.

He unexpectedly gets involved in a criminal offense after the death of his friend, who shares the same name as him. When the lawyer mistakes him to be the deceased Oh Soo, a wealthy heir, he grabs the opportunity to fool them into paying his debts. As he comes across the blind Oh Young, the sister of the deceased Oh Soo, he begins to fall in love with her.

Also Read: 7 Reasons Why You Should Watch It’s Okay to Not Be Okay K-drama