Top Music Genres Covered by BTS You Should Listen To!

BTS is one of the most unique music bands out there that has covered all the varied aspects of the music industry. No matter what genres you are in, you will definitely find a BTS song for it. 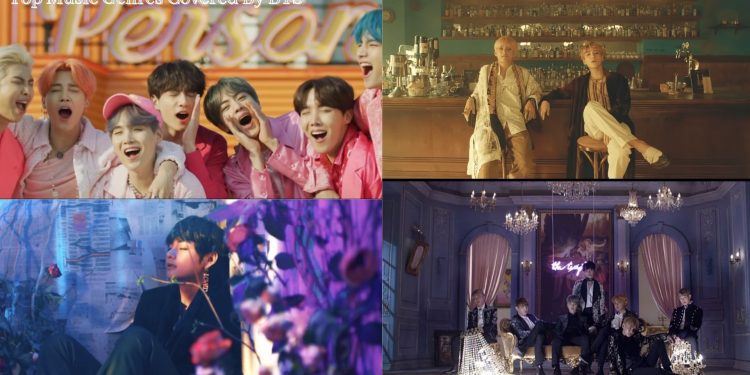 Music genres covered by BTS are in folds and varieties. When you enter the music industry there are thousands of genres waiting for you to jam on. Ranging from Ballads to Hip-Hop the options are always huge to fit into your particular taste. Music is a varied universe where you can relate to anything and everything without any grudges to hold. Looking for an escape? The answer is music. Stressed with your routine? The answer is music. Want to celebrate a moment? Again, the answer is music.

BTS is one of the most unique music bands out there that has covered all the varied aspects of the music industry. No matter what genres you are in, you will definitely find a BTS song for it. They have not only defined music but also has broadened its boundaries by multiple times. The group is globally known for their versatility and they have proved the same again and again with their heartwarming and fabulous music tracks.

Moreover, every music genre applied by them has been a great success worldwide. Every track from them stands as perfection in the crowd out there and once you are in you can never find a way out. Yes, you fall in love. Here, we have summarized the top music genres covered by BTS that you should definitely check out. We have song recommendations too for each one of them. So, let’s take a dive in.

Popularly known as the sub-genre of Greek hip hop music, Low Bap traces its origin back to the mid-1990s. The music genre is characterized by a slower tempo and rapping combined with lyrics that are packed with sociopolitical content. This particular genre of music is primarily used for bringing attention to a specific perspective on life, society, and politics. Its involvement has been expanded with time and you will find it as one of the boldest music genres out there.

Suga from BTS who also operates under the solo name AGUST D has used this genre in his solo track “724148” which was from his hit album titled “AGUST D”. The song reflects the symbolism behind the meaning of success and his beginnings in his hometown, Daegu. If you are looking for some great rap content then do jam on this.

Tracing its origin back in the 1970s, Latin Pop is recognized as a subgenre of a US music production with Latin music. The tracks are based on this particular genre of music that combines upbeat Latin music with American pop music. It is one of the most popular genres out there and if you love pop, rock, and dance music then do go for this genre.

BTS has developed their popular track “Airplane Pt. 2” under this music genre and their way of implication was really-really impressive. The song was released as a B track for their globally popular album “Love Yourself: Tear”. The lyrics of the track signify their journey and how far they have come and their wish to be globally successful and travel around the globe sharing their music.

Well, the song has become a huge reality. Do check it out because their amazing vocals are worth it.

Rhythm and Blues (R&B) traces its origin back to the 1940s from African-American communities. It is one of the most popular genres in the music industry today. The genre basically includes instruments like piano, guitars, bass, drums, and saxophones. It is hugely used to talk about the experience of pain the quest for freedom and joy, as well as the success of relationships, and aspirations. Though, with time its boundaries have expanded by a lot.

If you are looking for a masterpiece based on this particular genre then do for “Singularity” by V. It is a solo by him and was released as a part of the album “Love Yourself: Tear”. The lyrics of the track talks about V questioning the outer mask he is wearing for concealing his true emotions. He asks himself “Did I lose myself, or did I gain you?”

The relaxing beat of the song mixed with the deep honey-like voice of V has made it a living masterpiece that you should definitely listen to.

Another music genre covered by BTS, Moombahton Trap that traces its origin back to 2009. The genre is also known as electronic dance music and is a mix of house music and reggaeton. This particular genre of music includes characteristics like a thick and spread-out bass line, dramatic builds, and two-step pulse with quick drum fills.

Blood Sweats & Tears was released by the group under their album “Wings”. The lyrics of the song shows the journey of how one thinks, chooses, and grows. It addresses and symbolizes the themes of “temptation” and “carnal willingness” to sacrifice everything. The line from the song, “Kiss me, I don’t care if it hurts/ Hurry up and choke me/ So I can’t get hurt anymore,” expresses the true symbols of the song.

Ballad is one of the most popular forms of music which often is sung in a narrative set of music. Structured in an ABABBCBC form, with a total of 13 lines where every two lines are rhymed each with 14 syllables. In the past, ballads were used as a slow-motion music genre but with time its horizons widened and now it is also used as the sentimental ballad of pop or rock music.

Awake, a solo song by Jin is one of the best ballad songs out there you should definitely tap on. It was released for the group’s second studio album “Wings” and for “You Never Walk Alone” their repackage album.

In this song, Jin has talked about his inner struggle on how he was tired of everything and wanted to give up but also wanted to keep fighting and trying harder. He leaves behind a message through the song that if one day he has to leave they should not cry and also do not lie about their perspective about him.

Moreover, note down the point that this track will make you sob ugly.

This particular music genre is a radio format and is made up of entirely Black genres including R&B, quiet storm, urban adult contemporary, pop-rap, hip hop, and Latin music. The tracks based on this genre include characteristics of R&B elements mixed with production elements of urban Euro-pop, urban rock, and urban alternative.

The track titled “I Need U” by BTS is one of the perfect examples of the Urban genre of music. It was released as a third extended play for “The Most Beautiful Moment in Life, Part 1”. The song is a kind of expressive dance track mixed with the emotional vocals of the group. Its lyrics narrate the beginning of one’s young adulthood in which there is both beauty and uncertainty. The concept of the track focuses on the uncertain future ore than the glamour of youth.

Tracing its origin back from the late 1980s, the genre of the music is mostly influenced by the 1970s psychedelic funk sound. Funk Rap is characterized by multi-layered melodic synthesizers, slow hypnotic grooves, and deep bass. The content of the song can vary according to the artists and can be based on drugs, sex, love for a city, love for relaxing words, and friends.

Ma City is one of the most loved tracks by BTS and it is a hit party song with a powerful message. It was released as part of “The Most Beautiful Moment in Life Part 2”. In the song each member talks about their hometown and how international ARMY out there should learn about Korean history. Through this song, they try to teach everyone about the importance of many important events that happened back in time there.

One of the most popular music genres out there in the industry, electronic dance music is the party genre of every decade. Through the club culture, EDM expanded its boundaries and became the ultimate party starter. The genre is characterized by the collection of multiple genres like dance-pop, house, techno, and electro and their subgenres too.

BTS has incorporated this particular genre of music in many of its songs. And all of them are the biggest hits of the time. “So What” was released as a track for the album “Love Yourself: Tear”. The whole concept behind the song was the motto of self-love and how one’s own struggles with self-worth can be the biggest problem. They explain through this song that you should dictate your life choices, not the people who are in and out of your life.

If you are looking for some strong self-motivation then this is the track for you.

Tracing its origin back in the mid-1950s the Pop genre of music can be described in various forms and structures. Pop music is a whole structure on its own but also borrows elements from other styles like dance, Latin, rock, urban, and country. Pop songs don’t deal with the themes of challenging social order or political structure. Instead, it acts as a supplier for people’s personal desires.

Boy with Luv is a track by the group that was released as a sixth extended play for the album “Map of the Soul: Persona”. The song was one of the biggest hits by the group and became an instant DJ jam for everyone. The whole concept of the song explains that true strength and love both come from finding and acknowledging all the little things in life.

If you are on a hunt to find a heartwarming and charming song then this is your stop.

The particular music genre emphasizes emotional expression and is filled with confessional lyrics. Emo Rock traces its origin back to the mid-1980s and was recognized as an emotional hardcore genre of music. The chrematistics of the song involves guitar dynamics that involve both the softness and loudness of punk rock music. Talking about the lyrics of the genre then usually it is packed with emotional, personal, or confessional contents involving failed romance, self-loathing, insecurities, love, suicidal thoughts, and relationships.

Released under the third album of the band “Love Yourself: Tear” the track “Fake Love” has incorporated the Emo Rock genre in a very impressive way. The song talks about a kind of love that was once believed to be destined but turned out “fake” at the end and thus, it reflects and symbolizes the entire theme of “Love Yourself” series quoting “that any love wherein one does not love oneself is not real”.

It also showcases the emptiness that rests inside one’s heart who ends up investing too much in a relationship only to lose one’s own identity in the process.

ALSO READ: What Are The Popular K-Pop Songs That Starts With E?

Top 5 Books that Bill Gates Recommends for this Holiday Season