BTS PTD On Stage LA Concert 2021 Day 1 Highlights: Jungkook Teases With Hot Moves, and Others Rock The Stage On Fire

BTS are back with offline concerts. Their PTD On Stage LA Concert 2021 Day 1 has successfully ended. 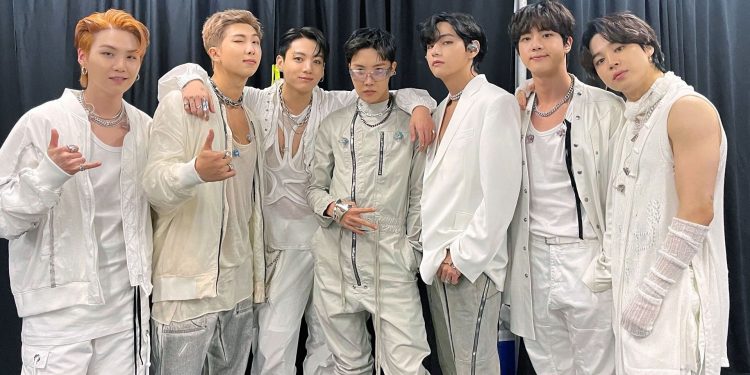 BTS at the PTD On Stage Concert Day 1

BTS LA Concert 2021 day 1 has successfully ended. The “Permission To Dance on Stage” concert by BTS marks their first offline concert in two years and is post-pandemic. The BTS Army was already emotional about seeing the seven boys perform on stage. However, everyone who attended the BTS PTD LA Concert Day 1 has gotten a lot more than expected. It looks like the first stop out of four proved to be extra thrilling and joyful for the fans and BTS itself. The Kpop boy band rocked the stage with their fiery performances. Moreover, their backstage meet and greet have become the headlines too. So, let’s check out the highlights from BTS PTD On Stage LA 2021 concert Day 1.

After two years, South Korean pop sensation BTS is on its 4-day offline LA concert schedule. Comprising of their hit songs, the setlist for day 1 elevated the moods of the attendees. Plus, the energy delivered by the septet made them groove, even to the Korean lyrics. It is clear that BTS has dominated the Hollywood music market as well. Especially, after their big wins at the AMAS 2021, the entirely jam-packed stadium did not look surprising to us.

BTS LA Concert 2021 Day 1 had everything: the best performances, crowd interaction, fan chants, energy, vibes, and BTS members having a gala time. While performing their hits, some members made the audience drop their jaws on the floor. For Instance, the makne, who is on his way to becoming the coolest man on the planet, appeared in a cropped blazer while performing ‘Fake Love.’ Everyone went crazy seeing his abs, moves, and the new lip piercing. Calling the “Fake Love” Jeon Jungkook hot would be an understatement.

Moving on from Jungkook (It’s complicated), Jimin, V, Suga, J-Hope, RM, and Jin, also stood out. They crooned ON, Telepathy, Black Swan, and more, with their magical voices. All of them started with beautiful white attires. But, the black costumes turned them into much more gorgeous human beings at the concert.

Jin’s Flower Hat comes second in the Highlights of the BTS LA concert Day 1. While the youngest of the group was being all hot and cool, the eldest, Jin, made everyone go ‘AWW’ with his flower hat. The “Abyss” singer interacted with Armys as he made a hat out of a flower and ribbon for himself.

The Rap Line- JHope, RM, and Suga – cried meeting their fans after 2 years. Everyone knows about BTS’s love for their fans. RM and J-Hope cried, and Suga almost cried at the SoFi concert, proving their love once again. After reuniting with their fandom family, the rap line and the others got emotional. Fans shared the same on Twitter and praised RM for always thinking about BTS Army.

hobi was holding himself back from crying during his ment 🥺 i love him so much 🙁 pic.twitter.com/V1tTIqcSke

Jimin’s Excited Jumps Return – The owner of the angel voice- Jimin- is known for getting the most excited during concerts. During the BTS LA concert on Day 1, Jimin’s excited jumps came back as he happily jumped and played around with the other members.

V’s accidental ball hit – As all of the BTS members are known for their playful side, V made sure to include an ARMY this time. As the singer was playing with a balloon on stage, he tried sharing it with a fan. But, it accidentally turned into a hilarious scene when the big balloon hit the fan.

At this point, BTS is bigger than a lot of musical acts in the world. The denominating South Korean boy band has fans globally including some big American celebs. During the BTS PTD LA Concert, many fans spotted Lil Huddy, Halsey, Anderson Paak, Harry Styles, and other musical artists grooving to BTS’s hit songs.

After landing in LA, BTS attended the Harry Styles concert. And, Styles joining the boys on their big day is truly wholesome. On the other hand, Halsey is the group’s best friend. So, it’s no surprise that the “Closer” singer was at the concert. Anderson Paak updated fans through his IG stories, and the singer also exchanged albums with the septet backstage.

Also Read: BTS Receives A Grammy Nomination: But Why Is ” Scammy” Trending Again?