Despite the chances of getting into unnecessary dating scandles, there are still some K-pop idols who love to showoff their friendship with artists of opposite gender. 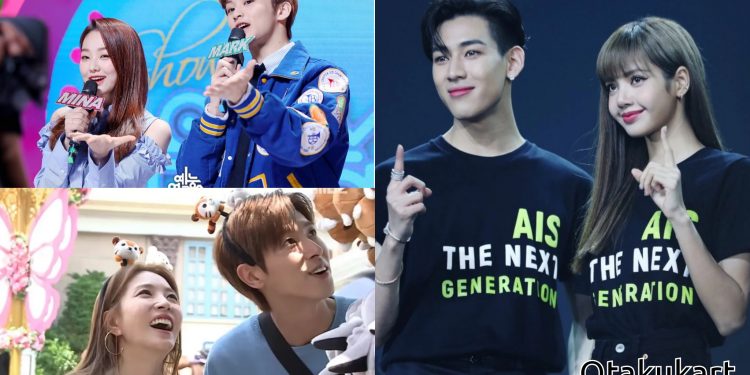 Being a K-pop idol comes with a price. While the idols get an immense amount of love and affection from their fans, most of the time they don’t have a say when it comes to dating. They aren’t allowed to date anyone and has to avoid everyone who can get them into such rumors. Despite everything, there are a few popular friendships in the K-pop industry between a male and a female idol who don’t hold back to getting close to each other just because the media can misinterpret their relationship. And that’s what makes their friendships heartwarming!

Here is a list of the top ten best male and female friendships between K-pop idols who you might actually want to start dating in real life! While some of them have been friends all their lives, others have become close during their trainee days. Nevertheless, they genuinely care for each other and have shown support from time to time.

The dynamite duo of BIGBANG’s G-Dragon and 2NE1’s CL is often referred to as the ‘SkyDragon’ and it’s not because they are shipped together, but because they share a sibling-like bond with each other. On one occasion when G-Dragon came live, there had been a lot of questions about whether he liked CL, to which he responded how great of a human being she is and that he definitely likes her. Both of them have been trainees under the same label, YG Entertainment, and have openly addressed their cute friendship over the years.

Another great friendship that the K-pop fans have witnessed is of Somi & Daehwi, who had met each other as trainees under YJP Entertainment. Although they have left the company to make a solo career, their friendship has been sustained. They catch up and support each other from time to time and have been together in a CF. On one of the episodes of the Coca-Cola Journey Carpool, Somi & Daehwi went for a little deeper talk about their friendship since their middle school days. They stated how they didn’t really like each other in the beginning but ended up being great friends. Moreover, Somi had been a big support to Daehwi during his early days as a K-pop idol, when the latter was going through major stress.

Gugudan’s Mina and NCT 127’s Mark are K-pop idols born in the year 1999 and have together attended the school of Seoul of Performing Arts (SOPA). So it’s quite natural that they are friends even after the two have graduated from school back in 2018. Whenever they are seen together, they seem to be super comfortable around each other. They were chosen as the new MCs of the music program, ‘Music Core’ along with Wanna One’s Ong Seong-woo, where the fans got to witness their cool friendship.

The behind the scene clips of ‘Music Core’ showcase how they used to help each other read their scripts and plot before the filming. Mark getting all cute and embarrassed seeing Mina’s aegyo and Mina laughing and tapping his shoulder after one of his jokes proves how they don’t hold back from expressing what they truly feel about each other.

Although Eric Nam and Amber Liu are probably friends with every artist in the Korean Entertainment Industry, the friendship they share with each other is the most special. They joke around most of the time as if there’s no tomorrow and often hang out with each other along with their mutual best friend, Ailee. In fact, they themselves revealed that they have made a marriage pact according to which if either one of them fails to find love, they will have each other’s back. The statement was immediately turned into a joke when Amber said that the pact is not exclusive at all and that Eric has made such a pact with all those mad people to whom he’s like insurance!

Read: ‘Never Twice’ Review: Why You Must Watch this K-Drama?

BoA & Yunho are that pair of friends who don’t talk every day but whenever they do, it feels like yesterday. Since they are of the same age, they seem like fraternal twins who won’t get into rumors of dating even if they hug each other. Yunho got close to her after he made his debut as a member of TVXQ. They admitted how they were so awkward at first but suddenly during the overseas promotions, they bonded. Yunho has even mentioned that she is an amazing and loyal friend who will rush to help him without asking anything. Remember the time when Yunho protected BoA with his hand when a car cut in before them? Evil eyes away, please!

SUPER JUNIOR’s Heechul is known to be friends with a lot of female K-pop idols but has a really close friendship with Taeyeon from the girl group Girl’s Generation. They are labelmates under SM Entertainment so their friendship goes back through their whole careers. Heechul is particularly very vocal about the support Taeyeon shows to him behind the scenes. He has mentioned multiple times how she is a real friend on whom he can count on during the hardest times of life. She genuinely cares for him and has even said that she will sing the congratulatory song on his wedding day! In fact, Heechul, in an interview, has mentioned that he won’t think twice before risking his life if he ever sees Taeyeon drowning.

BTOB‘s Changsub and Apink‘s Chorong, both under the label Cube Entertainment, share one of the most sincere and strongest friendships among K-pop idols. The two mention each other whenever they get an opportunity and have never hesitated to give a ring while guesting on variety shows. On one of the occasions, Changsub called Chorong to help him with a prank and asked her to be his girlfriend for which she broke out into laughter saying how she didn’t consider him as a man at all. Ouch! Another time, Chorong made a prank call to him and asked him to lend her a big sum of money for a family emergency. Without any question, Changsub agreed to it upon twenty cups of coffee! One of Changsub’s music videos features Chorong for his solo song titled, ‘Gone’.

Former KARA member Youngji and GOT7′s Jackson became good friends on the popular show, ‘Roommates’ where they had to live together with eleven other celebrities, sharing a common living room, kitchen, and restroom, as well as doing household chores. They have a really cute friendship full of admiration and teasing. On one of the shows, a lie detector caught them having feelings for each other, making the situation very awkward. However, they have remained friends as of now and continued their bickering friendship!

The Internet is full of past photos of BLACKPINK‘s Lisa and GOT7’s BamBam, when the two were just kids in Thailand. Yes, they are childhood friends and have known each other for more than fifteen years! BamBam and Lisa have been a part of the same dance group before they joined their respective labels and debuted in 2014 and 2016 respectively.

Being the only Thai members of their respective groups and born in the same year, the two are really close. There have been times when they have been photographed interacting with each other’s families, celebrating, and hanging out. It is also not rare to see them coming across each other in most of the award shows and events where they acknowledge each other’s presence. You might have observed BamBam always nodding along whenever BLACKPINK performs on the stage, showcasing his support as a proud chingu.

Lisa has, from time to time, mentioned how she’s close with 2PM’s Nickhun, CLC’s Sorn, and Bambam. She openly hangs out with him whenever they get a chance, despite their busy schedule. Remember the time when BamBam supported Lisa on Twitter when she was attacked by some racist comments? A friend in need is a friend indeed!

We are all acquainted with the fact that both Moonbin and SinB are rising K-pop idols who have been chasing after their dreams since young. However, did you know that they literally lived next to each other, in the same neighborhood? Not just living, they have been close friends for half of their lives, watching each other grow. They began their careers as models for children’s clothing lines after which, they went to the same dance school in Seoul, and became more constant in each other’s lives.

Even after the debut of ASTRO and GFRIEND, the two have never stopped making public appearances together, showcasing how free they are about their friendship. Their interactions on various TV shows never fail to catch the eyes of the fans. In fact, they even share the same celebrity circle with the other 98-liners! Friendship goals, isn’t it?