Korean dramas are famous for their romantic genre and chemistry of the couple. 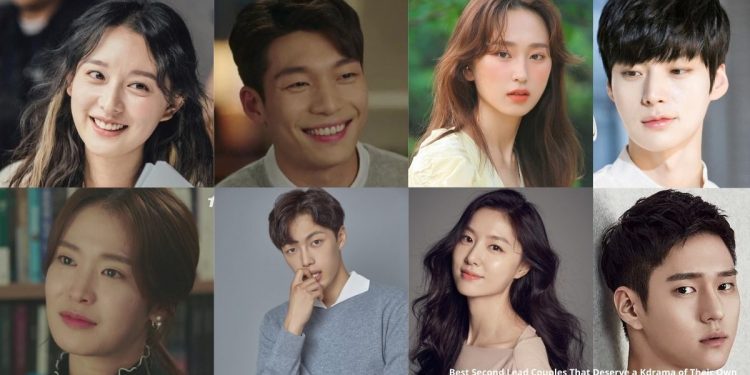 Best Second Lead Couples That Deserve a Kdrama of Their Own

Romantic Kdrama is one of the most popular genres that drama watchers are interested in. The main aspect that makes these romantic Kdramas unforgettable is the chemistry of the couple. We have seen many stories that will either have a love triangle or just the journey of a couple from beginning to end. However, a true Kdrama fan always keeps an eye out for the other potential couples who can steal our hearts. So on this thought, let’s talk about the best second lead couples that deserve a k-drama of their own. In many instances, it has happened that the second lead couple was recognized as similar to or more important than the main lead, but we never got to know their story.

However, we got to see a really loved second lead couple in their own Kdrama in 2021. Lee Dong-Wook and Yoo In-na were seen as a second lead couple in ‘Guardian: The Lonely and Great God’ Kdrama. Their love story and acting was so compelling that they became the favorite couple of many fans. Finally, in 2019 this on-screen couple became the main lead couple in ‘Touch your heart’ Kdrama. In-na played the role of Oh Jin-shim, a lost star who is trying to make a comeback in the entertainment industry. Whereas Lee Dong-Wook plays the role of Kwon Jung-rok, a workaholic lawyer who doesn’t care about anyone else. Seeing Dong-Wook and Yoo In-na was like a dream come true. Let’s see who are the other second lead couples with the potential of having their own Kdrama.

Also Read: Never Twice’ Review: Why You Must Watch this K-Drama?

1. Ji Seo Joon and Song Hae Rin from ‘Romance Is A Bonus Book’

‘Romance is a bonus book’ is a noona romance drama that was released in the year 2019. The story of this drama is very heart-touching as Kang Dan-I struggle with life and employment, and this gives a harsh insight into how love can fail you in life. Our main lead Lee Na-young portrayed the character of an unemployed divorcee to the best of her capability. Also, the male lead Lee Jong-suk made the drama unforgettable with his charms and caring personality. Kang Dan-I and Cha Eun-ho’s love story in the Kdrama’ Romance is a bonus book’ is epic, but the second lead couple made us fall in love with them.

Song Hae-rin is the lead content development editor at the publishing company. Whereas Ji Seo-Joon is a freelance book designer, who is known for his work ethic and selectivity. Initially, both were in love with Cha Eun-ho and Kang Dan-I, respectively, but being rejected by them developed a common ground for Hae-rin and Seo-Joon to bond on. Even after their contract to work together was over, Hae-rin kept persuing Seo-Joon, and along the road, they fell in love.

Yoon Hye-jin is a dentist living in Seoul whose life changes when she has to move to Gongjin. Even though life seemed unbearable and hopeless at first, Hye-jin finds someone she could rely on in this small town. She is a perfectionist who falls in love with Hong Du-sik, who is a free soul. Their romance developed over time, and when they finally confessed their feelings, it was already true love.

However, our second lead couple did not start their story similarly. Pyo Mi-Seon, who is Hye-jin’s best friend, moves to Gongjin to support her. When she sees Choi Eun-Chul for the first time, she instantly falls for him. Mi-Seon keeps pursuing the handsome police officers and one day confesses her feelings. Thinking that she faced rejection, she starts to distance herself from Eun-Chul, but the truth is he is also in love with her too. This love story of an outspoken cheerful woman and a shy sincere man won us over, making it impossible not to want a story of their own.

‘Reply 1988’ is a coming-of-age Kdrama that portrays the complications of love between four friends. The story of the drama is set in the late 80s, when the streets and houses were completely different. Also, the bond of friendship and love was shared with everyone.

The main lead couple Sung Duk-Seon and Choi Taek comes together after a lot of complications, but their love is true to the core. Choi Taek loved Duk-Seon ever since they were children, but Duk-Seon falls for Sun-woo as she thinks he likes her. Even though Duk-Seon’s first love didn’t flourish, her true love did. At the end of the story, Choi Taek kisses and confesses his love for Duk-Seon, and she finally realizes who she truly loves.

Our second lead couple in ‘Reply 1988’ is Sung Sun-woo and Sung Bo-ra. Both are from very different worlds, but Sun-woo’s determination makes Bo-ra fall in love with him. Even though the couple split because of some differences, they reunite in the end and tie the knot to commemorate their love. This second lead couple’s love story is not just heart-touching but also really funny. So we think they deserve a place among the Best Second lead couples that deserve a k-drama of their own.

4. Kim Ji Won and Jin Goo from ‘Descendants of the sun’

‘Descendents of the sun’ is a military drama with a great love story. Once you know Captain Yoo Si-jin and Dr. Kang Mo-yeon, you cannot forget them. The qualities like strong personality with a sense of duty makes both of them unique, and they are not for everyone. Also, like many great couples, they started with a bumpy encounter, but if it’s meant to be, you can’t resist love. Mo-Yeon is a cardiothoracic surgeon from Haesung Hospital, and she is assigned to lead a medical team in the military area. Here she finds Yoo Si-jin as the captain of the troop.

The main lead couple in ‘Descendants of the sun’ exhibited their relationship in the limelight, but the second lead couple was the one no one could forget. Seo Dae-young is a Master Sergent and Si-jin’s best friend who has a history with First Lieutenant Yoon Myung-Ju. They love each other immensely, but their ranks are broadening the distance between them. Even so, Myung-Ju being a stubborn person, never backs down and finally, our couple has a happy ending.

5. Seo Ji Hye and Kim Jung Hyun from ‘Crash landing on you’

Seo Dan is the daughter North Korean heiress who owns a department store. When Seo Dan returns from abroad, she is supposed to get engaged to Jeong-Hyeok, but he is in love with Yoon Se-ri. Similarly, Seung-jun is in love with Yoon Se-ri but gets rejected by her. While our main lead couple is strengthening their bond, Seo Dan and Gu Seung-jun find comfort in each other’s company.

This sense of comfort soon changes into fondness and later love that cannot be denied. Seo Dan and Gu Seung-jun are the Best Second lead couples that deserve a k-drama of their own. Even though this couple’s love story was not complete, their chemistry was undeniable and a feast for the eyes.

6. Son Na Eun and Ahn Jae Hyun from ‘Cinderella and the four knights’

The ‘Cinderella and the four knights’ is a story of our fairy tale like princess Eun Ha Won who wishes to become a teacher. She has a bright personality and tries to be cheerful even when troubled by her stepmother and stepsister. Her journey of earning money for her college tuition makes her cross paths with her prince charming Han Ji Woon. Initially, Ji Woon is in love with Park Hye Ji, who has always loved Kang Hyun Min and is never able to reciprocate Ji Woon’s feelings.

In the end, the main lead couple Ha Won and Ji Woon, acknowledge their feelings for each other. Whereas our second lead Hyun Min and Hye Ji, clears up all the misunderstandings and accepts their fate. Both of them have always loved each other and never thought they’ll part ways. Every time Hyun Min tried to hurt Hye Ji, she accepted his behavior because of her love for him. Truly their love story was an epic one and made us want to see more of them. Let’s hope to see them together on screen as they are one of the best second lead couples that deserve a k-drama of their own.

Also Read: Temptation Of A Wife’ Kdrama: Review, Season 2 & Where To Watch