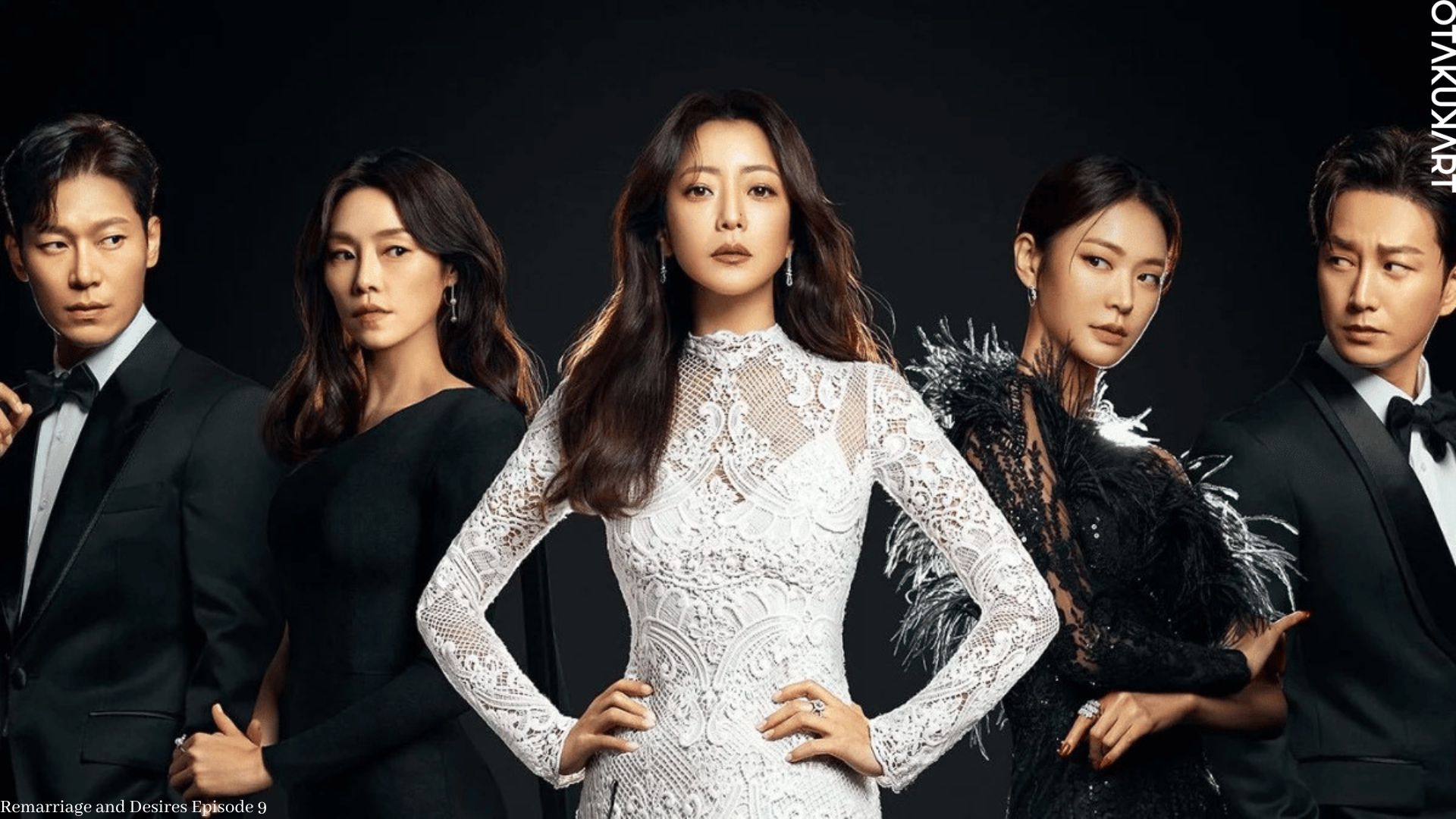 The speculations for ‘Remarriage and Desires Season 2’ are going on the internet. All the viewers out there are strongly hoping for the show to return with a second season, and there are high chances that their wishes might come true sooner or later. Indeed, the show did pretty well in all the terms, so the chances for renewal are also pretty high. Directed by Kim Jung Min and written by Lee Geun Young, ‘Remarriage and Desires’ is also known by other names like ‘The Black Bride.’

The show’s genre, melodrama, is one of the popular ones on the list of K-Dramas. Therefore, seeing the drama series get all the attention and good feedback is no surprise for us. Moreover, the aspects of revenge, infidelity, matchmaking, and strong female lead appealed to many out there. The entire series is showcased in a pretty amazing way, making it a new ultimate favorite of everyone.

The final episode of ‘Remarriage and Desires’ begins with a wrecked Hyun-Ju dashing off to the hospital for Hye-Seung. After finding out that Yoo-Hui was behind all this mess, he becomes completely livid and demands to know her connection with the driver. Hye-Seung finds the same information from Go Ae-Ran. The situation takes drastic turns, and we see Son struggling to decide with whom to side. Things cool down a bit when Min-Ji gains consciousness back in the hospital and is out of danger.

We see Seok-Jin commenting on the caring nature of Hyun-Ju and also asking Hye-Seung about her relationship with the latter. Though, the answer comes as a no. The same afternoon, Hibull and Lionsoft are dragged into a mess by the prosecution office. Filing the case of potential tax evasion, officers from the National Tax Service show up at their doors to carry out an investigation. In this mess, Hyung-Ju shows up to see Son, but nothing new happens. He is stuck by the same radio rhythm that he has to marry Yoo-Hui, and he is given a week to make up his mind for the same. 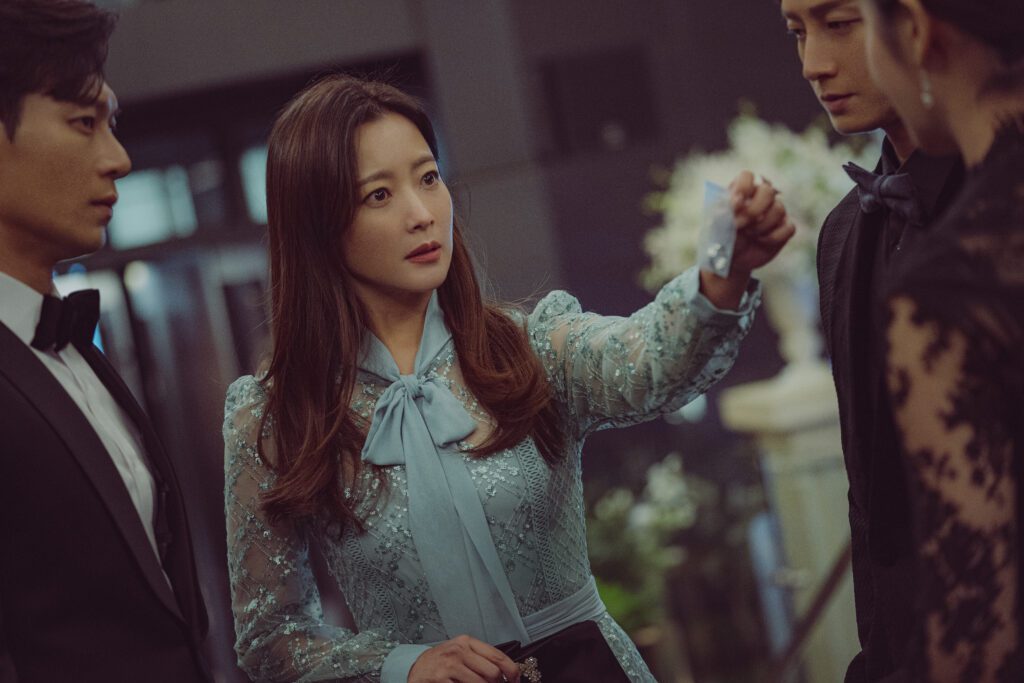 On the other side, we see, Hye-Seung finding a video left behind by Nam-Sik. Watching the same, she figures out the relationship between Yoo-Hui and Congressman Son. With this in her hand, she shows up to meet Son and tells him how Yoo-Hui tried to murder her daughter. She tries to bring him to her side, but he doesn’t budge and throws her out of his office. Later, we see Hye-Seung vowing to take both of them down and promising to reveal everything to Yoo-Sun.

Though, this time she is not taken seriously as Yoo-Sun shrugs the matter off. But she also encourages her to move forward and take the pair out, i.e., Yoo-Hui and Son. In the next scene, we see Yoo-Sun walking inside her house and unleashing all her thoughts regarding her husband to him. After hearing all of it, he suffers a heart attack and collapses. When all this was happening, Hyung-Ju was meeting Yoo-Hui and going ahead with their plan for the wedding.

Though, everyone’s attention is centered on Hyung-Ju when he mentions a ‘special gift.’ The announcement stunned everyone as he revealed that Yoo-Hui is Son’s illegitimate daughter. He also outs her as a liar and reveals her evil plan of getting Min-Ji killed and murdering Nam-Sik. A turn of events takes place, and we witness Ae-Ran recording everything with Son and forwarding it to the authorities. She warns Son about overstepping his boundaries, and at the same time, Hye-Seung comes rushing through the door. 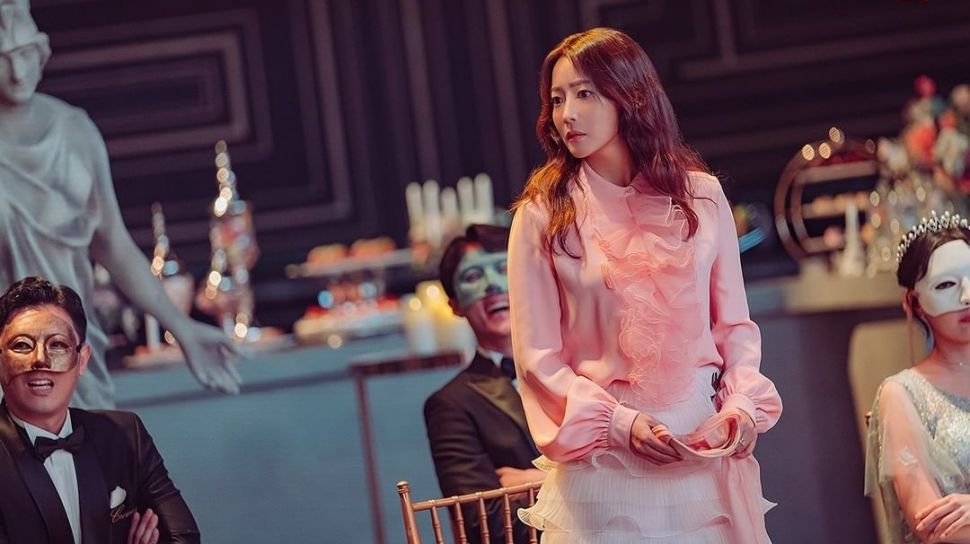 All the viewers are left with their jaws on the ground when it is revealed that Ae-Ran was working with Hye-Seung to incriminate Son. Son, blinded by power, is outed in front of everyone, and in the same pattern, Hye-Seung’s promise becomes a reality. In the hospital, she reveals that she is now the house owner and his company. Working behind his back paid off successfully. We see Hye-Seung being stopped by Ae-Ran, who throws her in the back of the car and clicks pictures of her tied up and unconscious.

The whole set-up was done by Son and Yoo-Hui to remove Hye-Seung from their way. When all this was happening, Hyung-Ju was meeting Yoo-Hui and going ahead with their plan for the wedding. Though, everyone’s attention is centered on Hyung-Ju when he mentions a ‘special gift.’ The announcement stunned everyone as he revealed that Yoo-Hui is Son’s illegitimate daughter. He also outs her as a liar and reveals her evil plan of getting Min-Ji killed and murdering Nam-Sik.

A turn of events takes place, and we witness Ae-Ran recording everything with Son and forwarding it to the authorities. She warns Son about overstepping his boundaries, and at the same time, Hye-Seung comes rushing through the door. The revelation about Ae-Ran working with Hye-Seung to incriminate Son shook everyone. Son, blinded by power, is outed in front of everyone, and in the same pattern, Hye-Seung’s promise becomes a reality. 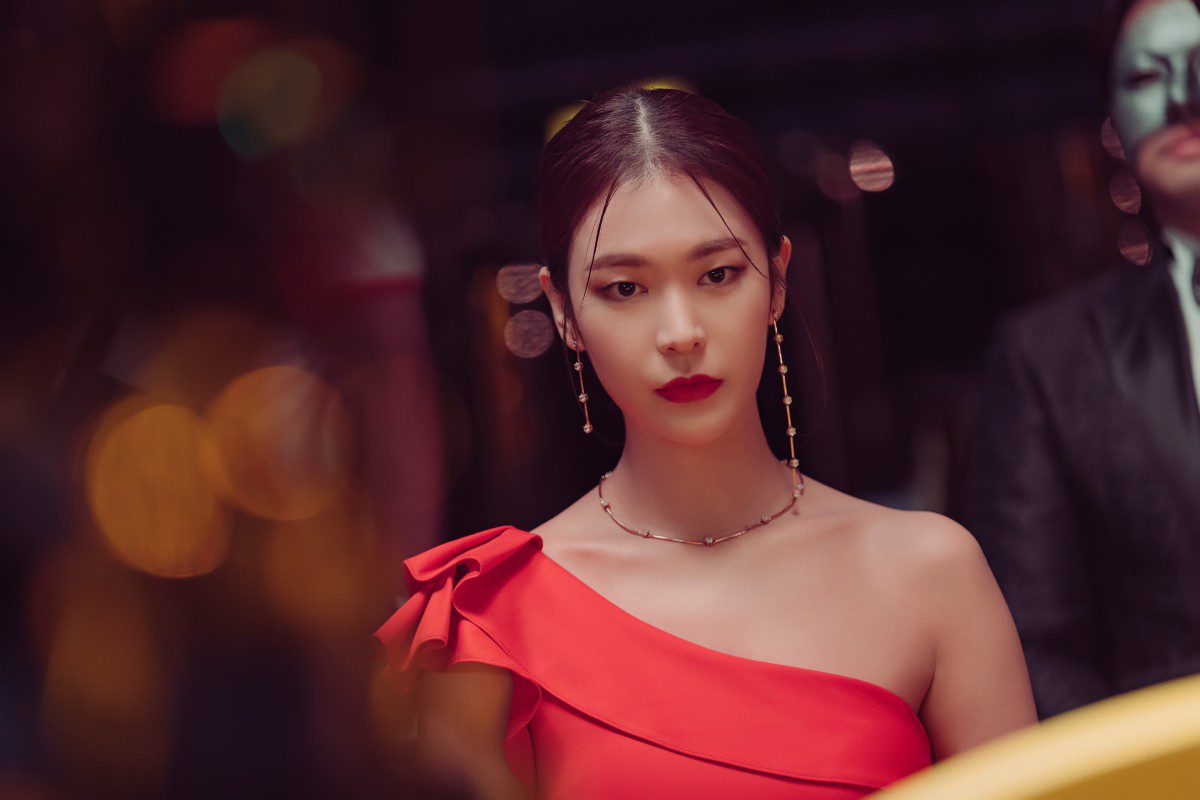 After everything, Yoo-Hui is thrown into a correctional facility, and Hye-Seung comes to visit her. Seeing her in a chill mood was a bit weird for everyone. She pointed out that she always wanted to take down her father, but Hye-Seung did it for her. We see her crying bitter tears and also laughing at the same time when Hye-Seung leaves. As the final episode wraps, we see Hye-Seung being walked down the aisle by Seok-Jin and marrying the love of her life, Hyung-Ju.

On the other side, we see Yoo-Sun being approached by a guy who offers her a deal. They team up together to start anew. But is it a new beginning? Or a continuation of something eviller?

Remarriage And Desires Season 2: What About the Plot & Cast?

Portraying the genre of melodrama, the drama series portrays the story of an exclusive matchmaking agency through which women strive to marry the most desirable bachelor and enter the highest strata of society. This whole phenomenon of marrying a rich guy and getting inside the higher order of society is a very common topic in today’s society. Many K-Dramas out there have portrayed the same storyline in different ways. And all those times, it was loved hugely by all the viewers. How the same topic has been portrayed here is also quite different for everyone. 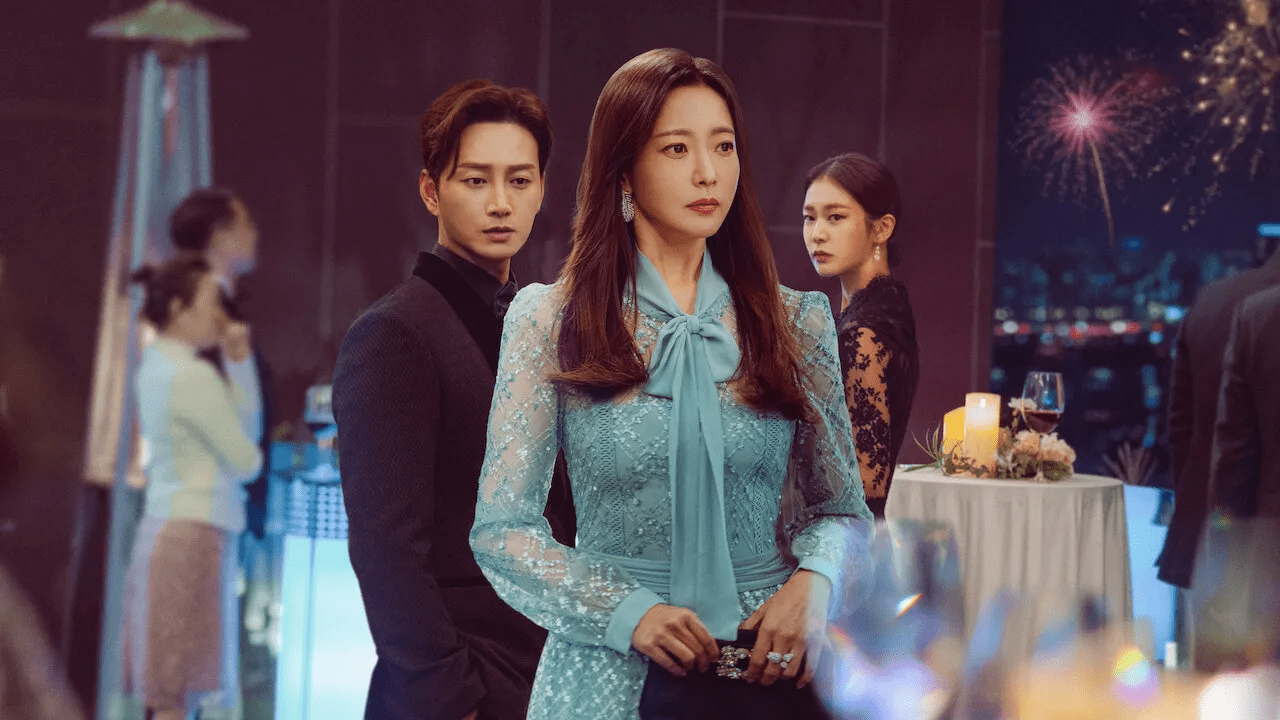 The layered structure of the storyline and the rhythmic patterned flow of the same managed to keep up with the engagement level of the viewers. If there is a ‘Remarriage and Desires Season 2’ happening any soon, then we might get to see a continuation from the point where the first season left us. The identity of the guy who approached Yoo-Sun at the end of the first season might get revealed. There are also chances that we might get to see a completely new story. Talking about the show’s cast, each of them did their job perfectly.

Kim Hee Sun was seen in the role of Seo Hye Seung, Lee Hyun Wook portrayed the character of Lee Hyung Ju, Jung Eugene was seen as Jin Yoo Hee, Park Hoon played Cha Seok Jin, Cha Ji Yeon portrayed Choi Yoo Sun, and Kim Yun Seo was seen as Heo Jung In. All of them did fabulous work throughout the drama series. How each of them played their respective roles was indeed incredible.

Also Read: Who Is Hwang In Yeop’s Girlfriend? Who Is the True Beauty Star Dating?

Remarriage and Desires Season 2: Is the Renewal Happening?

We will update you if there is any announcement regarding ‘Remarriage and Desires Season 2’ shortly.