We all know Dazai is the strongest right? Or is it Chuuya? Let's delve deep in. 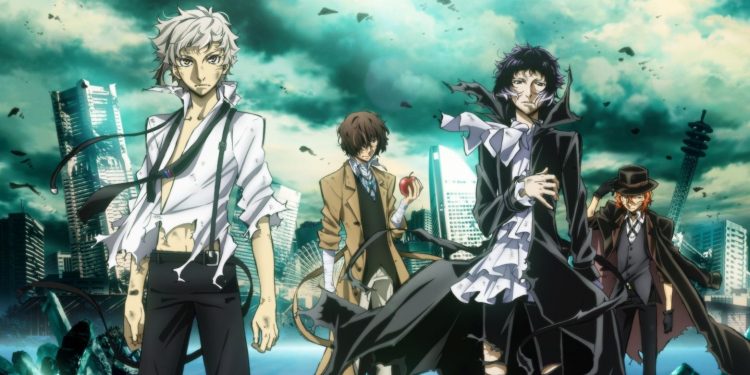 Bungou Stray Dogs is an action-packed series about a detective organization called Armed Detective Agency. They protect the city of Yokohama from the mafia. Let’s know about the 10 Strongest characters in Bungou Stray Dogs anime. The name of the anime means Literary Stray Dogs. The manga is written by Kafka Asagiri, and it has been illustrated by Sango Harukawa. The show starts with Atsushi, who is raised in an orphanage. He was abused by the headmaster and even suffered PTSD. He was thrown out later of the orphanage because of budget cuts as well. Later, there was a news flash that a were-tiger was on the run, and therefore Osamu Dazai went to find him as a representative from the Agency. Coincidentally, Atsushi finds Dazai trying to commit an eccentric way of suicide and ends up saving him.

Soon, Dazai found out that Atsushi possessed a unique gift to transform into a were-tiger. Later on, Atsushi was offered a job in the Armed Detective Agency. He passed the test with flying colors displaying his selflessness, humanity, and loyalty. This helped him to become the new member of the Agency. He was very surprised to hear that Dazai used to be a member of the Port Mafia, which was the strongest mafia group in the town. Port Mafia placed a bounty on Atsushi, which made his self-esteem go down. It let his trauma make him feel like he didn’t deserve love and care from the friends he had made in the Agency.

As he learns how to control and use his powers, he starts to heal in the environment. Soon, he grows pretty close to Dazai, Kunikida, Tanizaki, Kyoka-chan, Miyazawa, Yosano, and Ranpo. He also gained a rival from Port Mafia called Akutagawa, who has a tremendous talent for killing people!! Now let’s see who’s more powerful amongst the, from stronger to the strongest sequence.

A true gentleman, a workaholic like Nanami from Jujutsu Kaisen. His ability is called The Matchless Poet. He works at Armed Detective Agency. He’s practical to a fault, and that’s his only weakness. He carries that diary and writes every day how he can become an ideal person. He’s good at martial arts and has a very disciplined manner of handling life. He often gets angry when Dazai tries to commit suicide. The character is based upon Doppo Kunikida, who writes romantic poems and novels.

Odasaku was close to Dazai. His ability is predicting the future for 5-6 seconds. He is a kind man and very perceptive as well. He observed Dazai’s loneliness and recognized his urge to die as simple as lack of having a purpose in life and waiting to die. When in anger, he was a fierce fighter who used his ability perfectly. His ability is called Flawless. This lets him change the present according to his needs.

Akito Yosano is one of the core members of the Armed Detective Agency. She has a very rare ability called “Thou Shalt Not Die,” using which she can heal all the deadly wounds of a person. This makes her one of the strongest characters in Bungou Stray Dogs. The only flaw of this skill is that the wounds need to be deadly. Therefore sometimes, she has to literally shred that person in pieces to fully heal them. When she uses this, butterflies fly out of her body and sit on the wounded person to heal them.

Atsushi is a member of the Armed Detective Agency and possesses the ability of Beast Beneath the Moonlight. Atsushi had a pretty rough childhood and could finally find solace after becoming a member of the Agency. He got pretty close with all the members. He’s a kind and sincere person who has insecurities. Dazai always helps him out in times of distress. He sees himself and Chuuya in Atsushi and Akatagawa. They have the potential to become partners in the future.

Kouyou Ozaki has the ability to control the Golden Demon, which is like her familiar. It has a sword that can usually cut through anything. Kouyou is also one of the executives of the mafia. Once in her teens, she tried to run off with her lover but then got caught, and her lover was killed. This is why she hated the previous Port Mafia leader and was happy when he got dethroned. The character is based upon Ozaki Koyo, who was a Japanese author and poet as well.

Kyoka Izumi has the same ability as Kouyou Ozaki. Her familiar is called Demon Snow. She doesn’t really know how to control it. The Demon Snow only follows the voice that comes from within the phone that Kyoka carries. The Demon Snow was her mother’s, who handed it to Kyoka before the Port Mafia had come to kill her. That’s when she transferred her ability to Kyoka’s phone by mistake instead of Kyoka. Kyoka is usually shy and silent. She’s close to Atsushi.

Agatagawa is Atsushi’s rival and possesses an ability called Rashamon. He’s in Port Mafia and idolizes Dazai. Rashamon is dark energy that can kill anything and everything in sight. It’s one of the most sinister and dreadful abilities ever. It can literally cut through anything, even air. Akutagawa has weak lungs, which got damaged in his childhood in the slums. In his childhood, all his siblings except his sister Gin were killed off. He wanted to take revenge, but Dazai suggested that he could join Port Mafia and keep himself and his sister safe. There would never be a shortage of money again. Hearing this, Akutagawa was enraged, but still, he accepted the offer and gained strange respect for Dazai.

The character is based on the “father of the Japanese short story,” Ryunosuke Akutagawa, who’s name is used for Japan’s premier literary award, the Akutagawa Prize. He suffered from a psychological disorder known as Schizophrenia which distorted his reality and caused him to see hallucinations, have delusions as well as a fear for the vagueness of the future. He committed suicide at the age of 35 years.

He is the leader of the Guild, which was destroyed and later recovered. Fitzgerald is very rich, and in exchange for money, he gets the strength and speed as well!! He fights with his bare hands, and he’s good at it. Fitzgerald is over-confident, proud, and not exactly a man whom you can determine as good or bad. He cares a lot for his late wife and daughter, as well as his colleagues in The Guild. His character is based upon Francis Fitzgerald, who was a novelist as well.

Finally, it’s the turn of our favorite suicide maniac!! Dazai has this really cool power that can neutralize anyone’s power. It’s called No Longer Human, and for using this technique, he needs to touch this person whomsoever’s person’s power he wants to nullify. This makes him one of the strongest characters in Bungou Stray Dogs. He used to be an Executive of Port Mafia before he was shaken by some events which led him to join Armed Detective Agency. Akutagawa thinks of Dazai as a god and craves his validation. Dazai often leads Akutagawa and Atsushi together because he sees Chuuya and his own rivalry there, which helps both of them improve their skills.

Howard Philips used to be a member of the Guild before it got disbanded. His power is called Great Old Craft which allows him to turn into a monster with a branch and stem-like tentacle. He can regenerate, and even Daizai was not able to nullify yet. It helps him turn partly transfer or fully transformed body into a monster with plant tentacles.

Chuuya Nakahara is a gifted man with outstanding abilities and can be considered the Strongest among all characters in Bungou Stray Dogs. He was Dazai’s partner before Dazai joined the Armed Detective Agency. He has the powers called Upon the Tainted Sorrow and Corruption. With his powers, he can manipulate gravity, throw black holes, which are balls of compressed gravity, and do all the physics tricks with gravity that you can’t even imagine!! Despite possessing such a mind-blowing ability, he’s unable to fully control it, and that’s why he doesn’t use the black holes quite often. Chuuya seems to be a bit arrogant, but when he’s cool, he’s a reasonable person. He always gets triggered and acts all crazy around Dazai. It could be because of their friendship, rivalry, or even something more.

The character is inspired by Chuuya Nakahara, who used to write classical Japanese poems like haikus. He wrote “Upon the Tainted Sorrow,” which talks about hopelessness and the transient nature of life. The character is currently working for Port Mafia as one of the Executives at the age of 22.