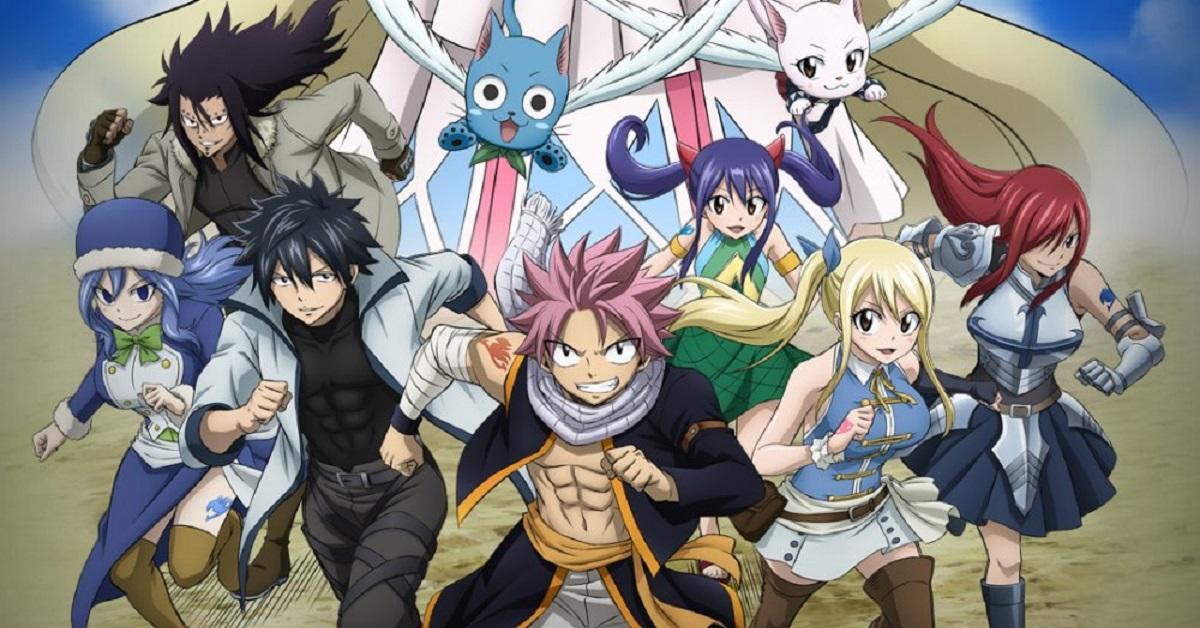 Fairy Tail is a Shonen Anime that is based on Hiro Mashima’s manga series of the same name (other works: Edens Zero). Shinji Ishihira directed this anime, which was produced by Satellite and A-1 Pictures studios (other works: Sasaki and Miyano). The story takes place in Fiore, a magical land where magic is a part of everyday life for its inhabitants. Facilities ranging from transportation to common supplies all exist because of magic and its benefits. However, it is speculative to believe that magic may be utilized for enormous evil. Magic guilds have been founded to guard dark powers against disrupting the natural order of magic.

Our main protagonist, Natsu Dragneel, while looking for Igneel, comes across a celestial mage (the user who can summon various celestial spirits), Lucy Heartfilia. Lucy discovers that Natsu is a member of the Fairy Tail guild after he rescues her from some sleazy fraudulent magician, and she accepts his invitation to join the guild. When She joins the Fairy Tail Guild, she comes across knowing many mages. Firstly the Ice wizard Gray Fullbuster, the person with is always without clothes. Erza Scarlet, the peerless combat Queen. Being teamed up together, they went embarked on a journey filled with many Quests. But the one danger that they must face is the ultimate feared Dark Magic Lord.

Filled with lots of adventure, action, and comedy, here are the 10 reasons why you should watch Fairy tail.

The Plot of the Fairy tail is very virtuous, the story doesn’t take time to introduce new characters. Daybreak ark was Natsu and Lucy’s first Mission, which set the center of the plot of them going on adventures. With every new Arc, the story got better and the narration of the plot wasn’t slow. The world-building in the plot remains reconcilable with the characters. Most problems with Shonen Anime are that episodes tend to be repetitive with the plot and recaps. But with Fairy tail it’s the opposite case, the recaps are short and the story progresses well at a good pace. The element of fantasy, action, adventure, and comedy is blent well with the story. 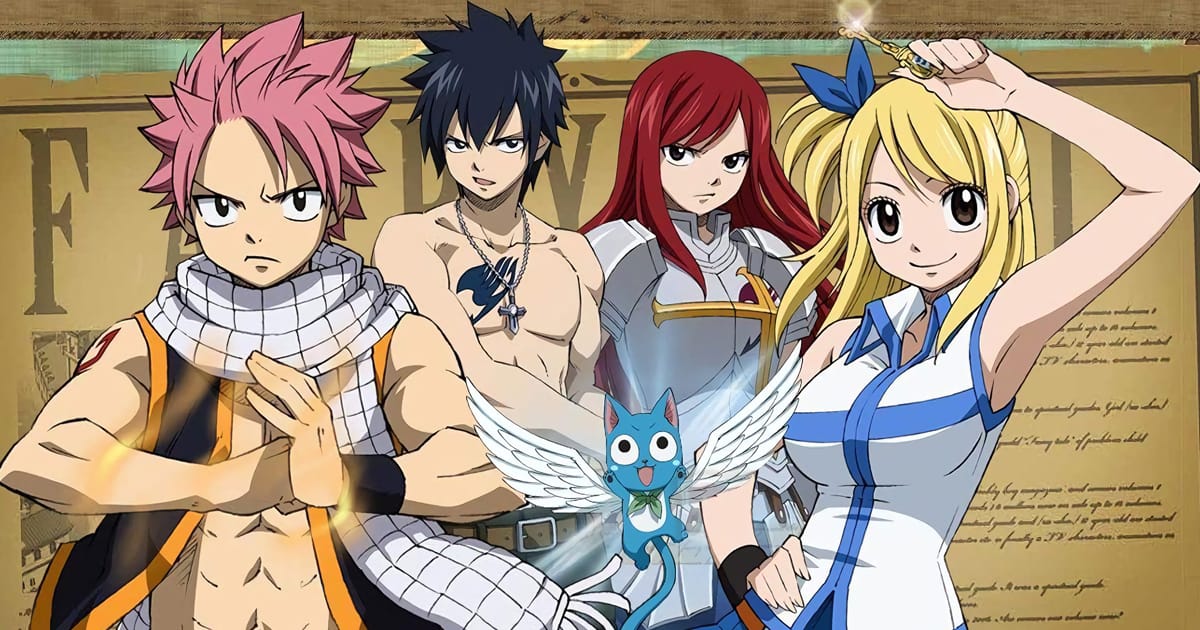 Also, Read – Anime Releasing on Netflix in April 2022 That You Should Watch

Fairy Tail has quite a lot of unique characters, mostly consisting of Fairy Tail guild members. Each character has an eccentric edge and connection to the other. Natsu can be described as an emotionally complex character with having a comedic side to him. Besides Natsu, there are characters like Lucy, Gray, Erza, and Happy. 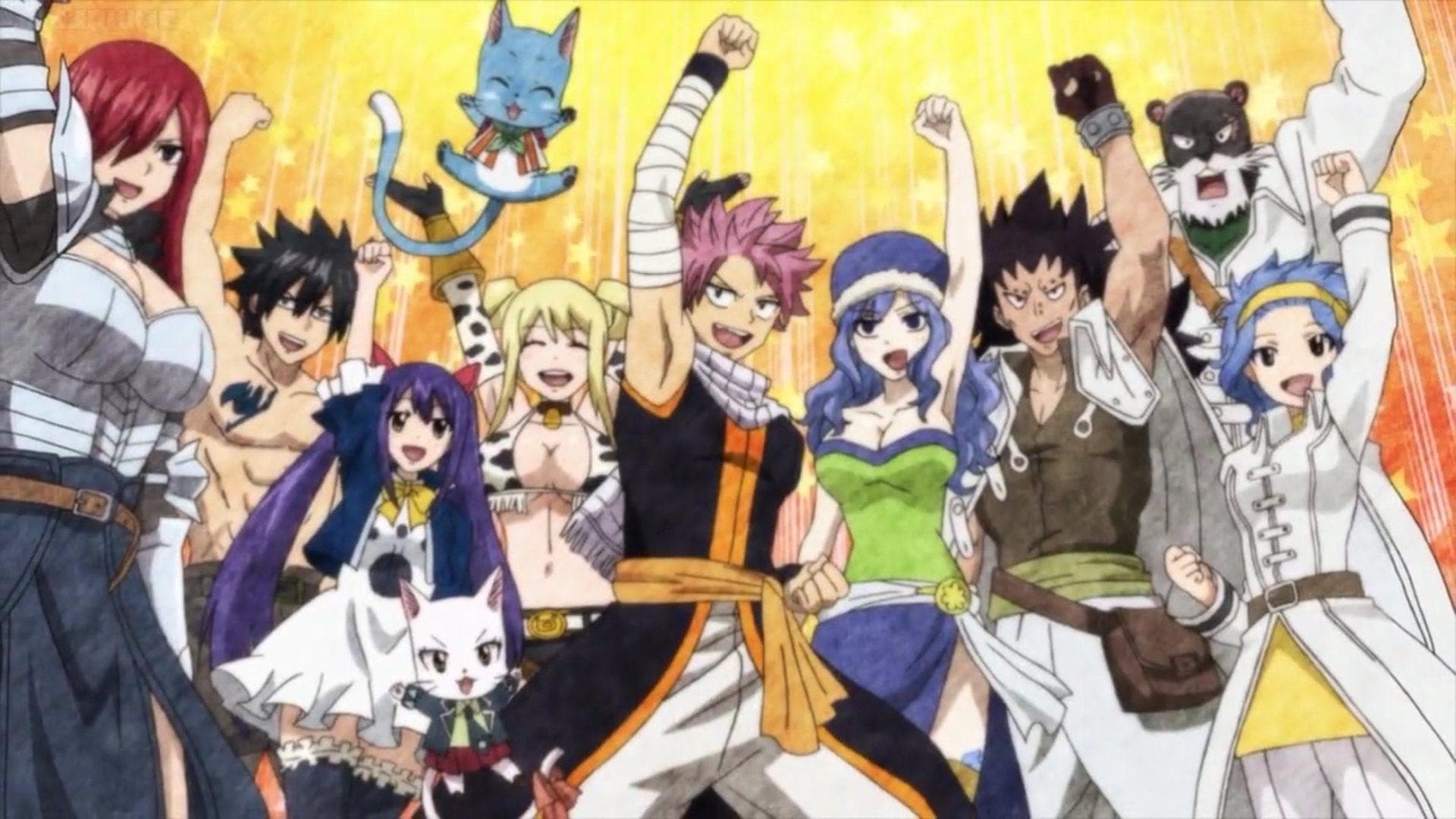 There is no doubt that a major part of an Anime is its background score and its soundtrack. Fairy tail has one of the best soundtracks, and Background scores varied between Pop, Rock, and even Rap genres. Sound Director Shouji Hata has done a brilliant job in attaining the emotions. The opening themes are marvelous with match the pace of the screenplay well, which keeps you interested in the plot. The Background score comprises of making many breathtaking moments within fight scenes with its music. My favorite opening song and background score are “Snow Fairy” and Erza’s and Natsu’s theme. 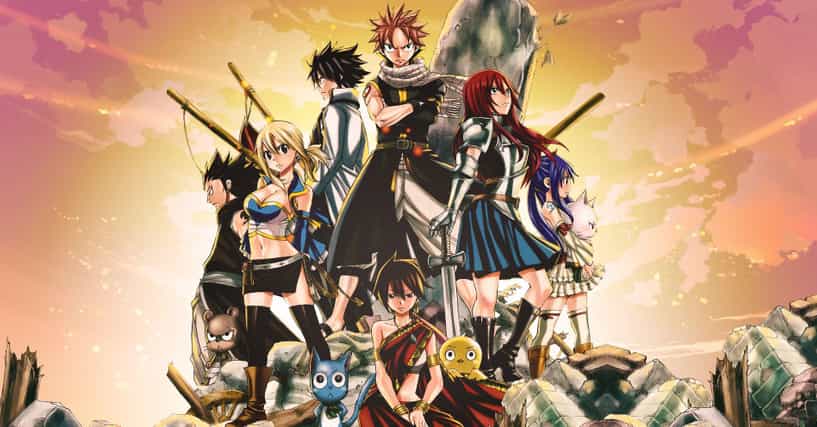 Besides Story and Character development, what excites viewers the most in anime is the relationships between characters. Being indulged in seeing romance between characters is quite natural. There are many characters ships which will surely interest you in watching this Anime.  The most famous Couples in Fairy tail among fans are Natsu and Lusy or one might say “NaLu”. These two have great chemistry together, their often flirtatious behavior is quite fun to see. Relationships don’t always have to be romantic, there can be a Bro relationship as well. Happy and Natsu can be called one of the best buddy duo, their bonding and understanding of each other. 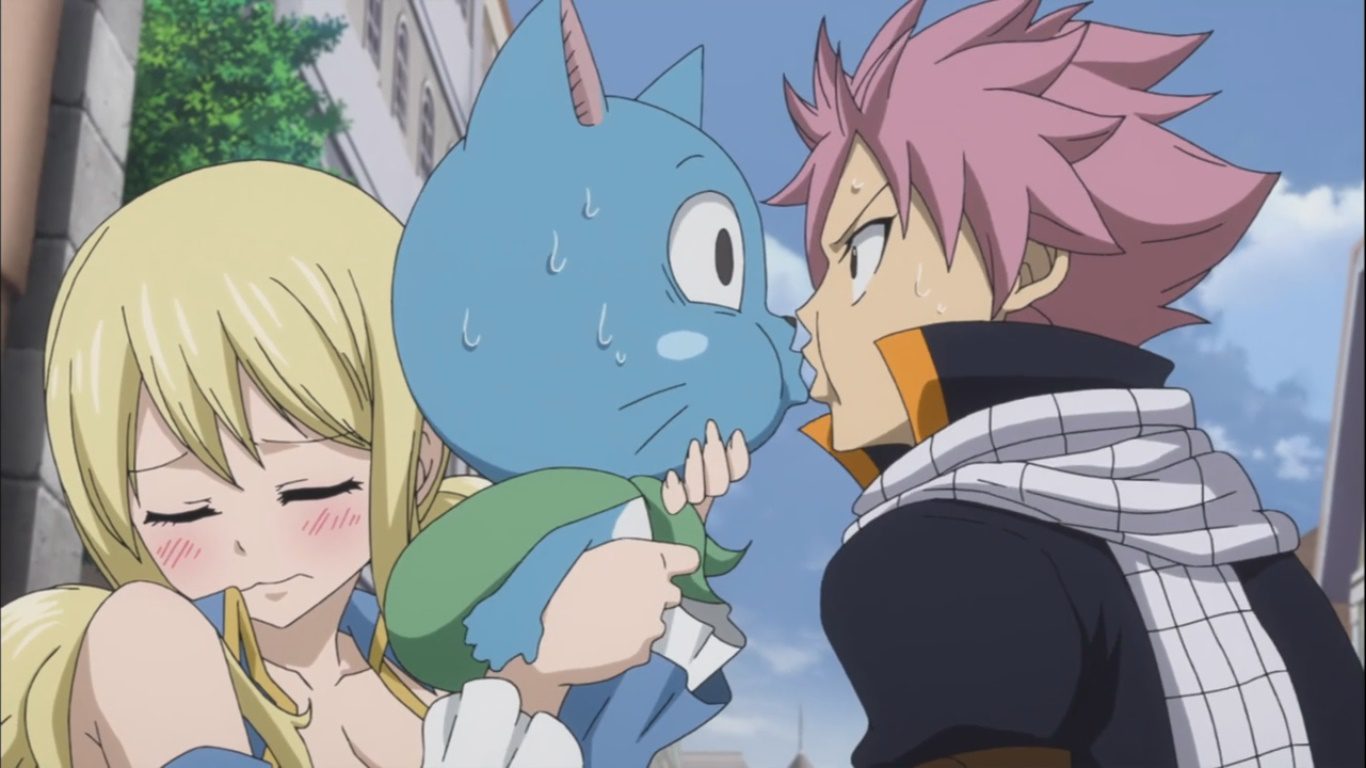 What comprises a story in an Anime is its Arcs. Every Arc consists of an existing Plot that centers around the story with specific sections of the story. These can also be called mini-plots that end with some resolution which helps the main storyline. There are many great Arcs in the Fairy tail Anime. Each story arc contributes greatly to the main story and character development. There are many arks with great action sequences and emotional moments. My favorite arc is the “Grand Magic Games” and “Tartaros” Arc. Every Arc covers normally 20-50 Episodes. Some viewers might skip the filler arcs in this anime, but the “key of Starry Sky” ark is a must-watch. 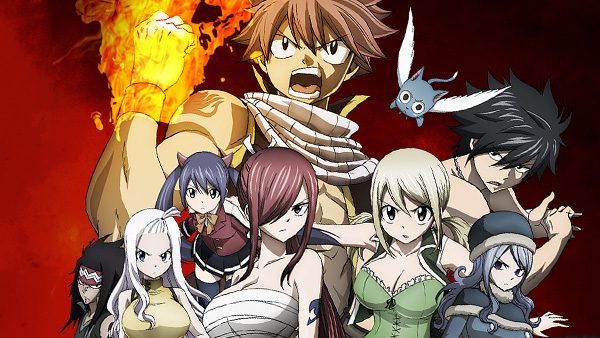 Also, Read – Top 10 Anime Filler Arcs That You Should Not Skip

What makes a great fight scene more intense is power-ups. Being the strongest character doesn’t always pay off as there is always someone higher than you. To overcome these overpowering villains, you have to keep upgrading your powers. Fairy tail’s main character Natsu is capable of using Fire Dragon Slayer Magic. He is undoubtedly one of the strongest wizards in the series and has some of the best power-ups. One of the best Power-ups of Natsu includes “Dragon force”, “Hidden fire form” and “Multi Dragon force”. You can feel goosebumps while watching the fights. 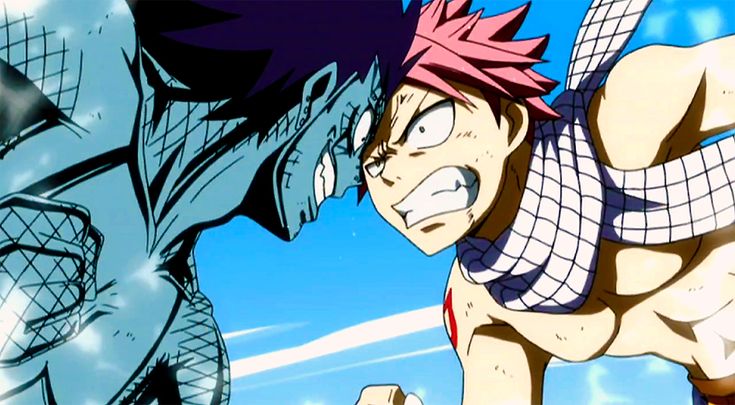 Also, Read – Best Anime Fights Of 2021 That You Should Watch

Frenemies can be considered as your Rivals who encourage you to move forward and push yourself to perfection. Some relationships start with being rivals and end up with being inseparable friends. Natsu and Gary both are fellow teammates in the Fairy tail guild. They both have fought with each other since their childhood days. Natsu’s magic element is Fire, and Gary’s magic element is Ice, they inevitably fight each other. But this rivalry bond is what makes their team stronger. Cause when they both fight together to protect what’s precious to them, then it is impossible to stop them. 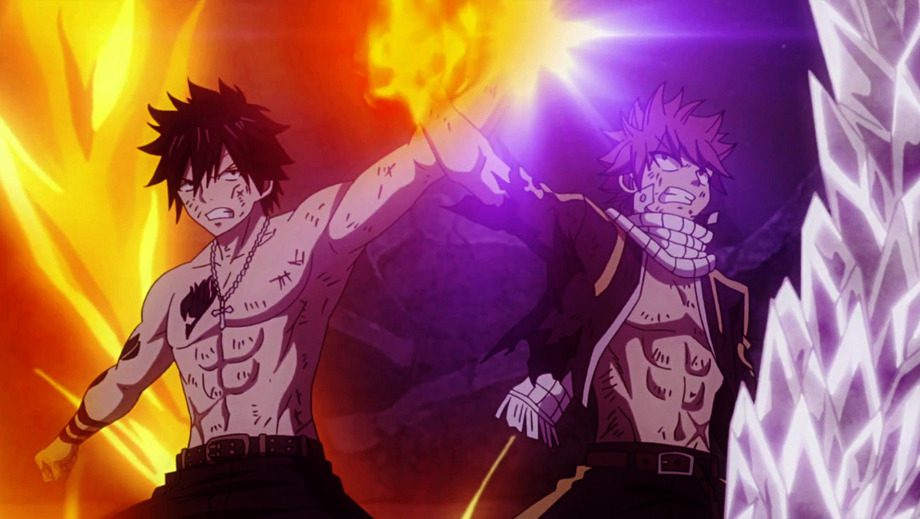 Natsu and Gary fight together

Also, Read – Top 10 Rivalries in Anime of All Time

Female Characters in an Anime are very important as they are often the key to the conflict. Fairy tail has some badass female mages with an enormous amount of Magic power and many Fan service moments. Erza Scarlet is among the most powerful female mages. She is part of Natsu’s team and also one of his closest friends. She can even be considered a Lead Character as she has countless times saved Natsu’s and Gary’s life. You will love how the atmosphere around her changes when she charges to fight. Besides Erza comes Mirajane, who is also very strong. She seems like a Delightful personality, but in reality, she has a terrifying soul. 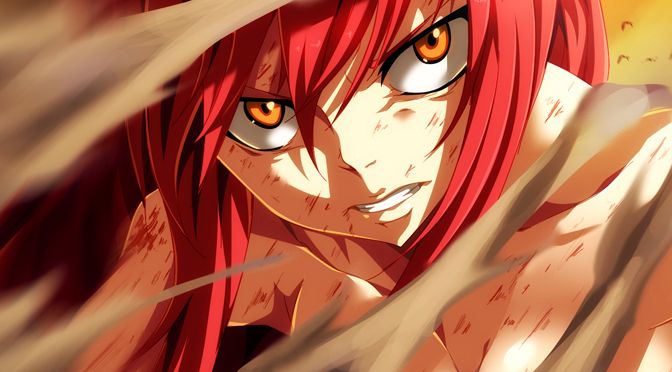 Erza, during a fight

What one can gain by watching anime, and being entertained is one aspect of it. But being inspired is another story altogether. Fairy tail has many aspects of the story that inspires the viewers. There are many life lessons you learn while watching anime. The most important life lesson for me was the “Value of friends and family”. Fairy tail teaches us the joy of friendship. When Lucy first stepped into the Fairy Tail guild, she felt like she had become a part of a big family. A family that she never had, which, in general, gave her strength to move forward in life. Viewers will feel a sense of comfort while watching this anime.

When you watch an Anime, it means you are investing a lot of your time into it. And when the conclusion of the same Anime is not good. You might never want to invest your time in another Anime of the same level. But Fairy tail Conclusion delivers to its viewers what they desired, great suspense and great action sequences. The Boss fights are the Epitome of Fairy tail. So if you want to watch a good action and adventure-filled fantasy Anime. Then fairy tail is a must-watch for you. 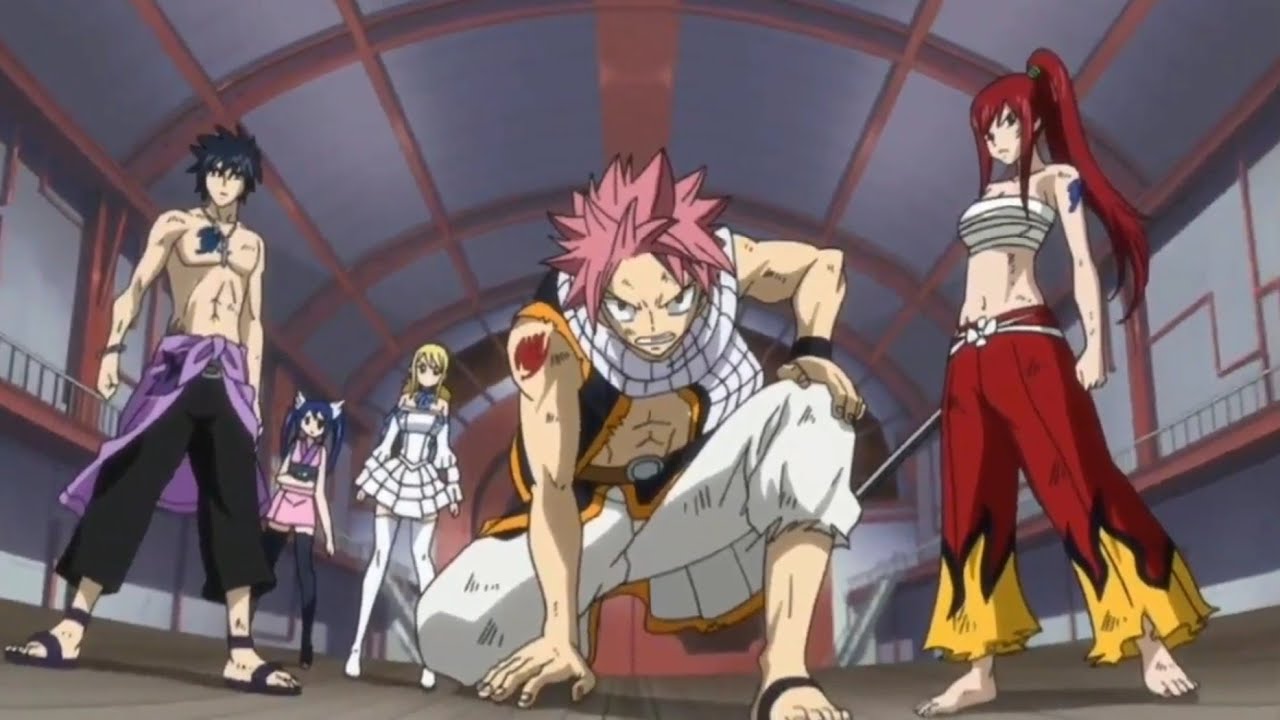