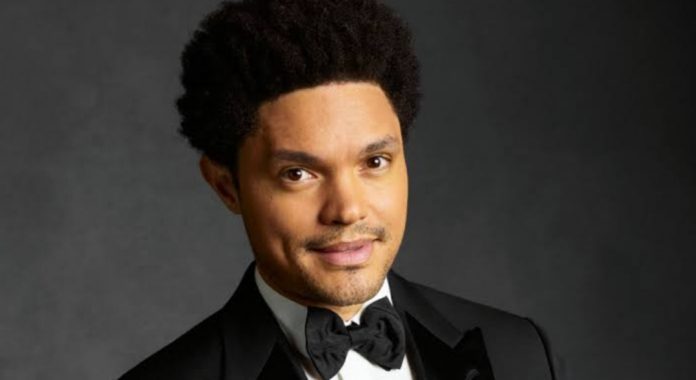 Today, we will discuss Who is Trevor Noah Dating? What do we know about the famous comedian’s love life and noteworthy career details? Starting from the basics, Trevor Noah is a professional comedian and host. By hosting The Daily Show, he has been gaining quite a prominence. This year, he has won the NAACP Image Awards for the same. His other hosting works are Comedy Central Roast Of Steve Hofmeyr and White House Correspondents’ Dinner. Little did you know, Trevor is also a successful actor, while some of his notable films include- Mad Buddies, Coming 2 America, etc. In brief, Trevor is pretty much successful in his professional life.

Similarly, Trevor Noah’s Dating life has been a bit on-off. When it comes to his girlfriend, the host is pretty much open and doesn’t fail to showcase their love for each other. Despite sparking break-up rumors last year, the love birds have successfully made it together.  For more details about Who is Trevor Noah Dating, I would highly recommend you to read this article to the end.

Also Read: Who is Minka Kelly Dating Now & What Happened With Trevor Noah?

Who is Trevor Noah Dating? The Comedian’s Love Interest

Talking about his girlfriend, Trevor Noah is currently dating the love of his life, Minka Kelly. In case, you are not well aware of his girlfriend, Minka Kelly is an actress who has gained popularity for her role as Sara in the film The Roommate. Some of her other hit works are- Lansky, She’s in Portland, Friday Night Lights, Charlie’s Angels, Almost Human, Titans, etc. you will be happy to know, that Minka is set to release her upcoming film, Shady Friend. Trevor is there to cheer her up!

Even though the love birds have been linked for the very first time in September 2020, they later confirmed to see each other before the pandemic came up. However, initially, they kept it low-key. Moreover, the pair was quarantined together amid the lockdown. At various places and occasions, Trevor and Minka have been spotted together holding hands of one, showcasing their romance to the fans.

Despite so much happiness and lovey-dovey moments, the duo broke up in May 2021. It might be because of their busy schedule and career commitments. Well, after a few days of their split, they were spotted having lunch outside. This made the fans wonder if they are back together as a couple. Later, Trevor and Noah confirmed that they realized to be ‘happier’ together rather than staying apart from each other. But, they don’t seem to rush down the aisle real soon. The couple gave this year a fresh start with their trip to South Africa, with a group of pals. in short, they signify ‘a couple made in heaven, destined to be together.’

Besides learning Who is Trevor Noah Dating, people are interested to know more about him. Born on 20 February 1984, this multi-talented star is currently 38 years old. He was born in Johannesburg, South Africa. You may follow Trevor on his social media, for more of his career and love life highlights. On Instagram, he has garnered over 7.4 million followers to date.

Moving on with his career, for each of his versatile performances, Trevor Noah has been the recipient of several accolades like- the MTV Africa Music Awards, the Writers Guild of America Award, Primetime Emmy Award. Not to forget to mention, he is also an author. Some of his renowned publications are- Born a Crime, Place Of Gold: Coming of Age With South Africa, etc. Trevor has provided the voice of Griot in Black Panther, released in 2018. Some of his hit television works are- American Vandal, Klepper, etc. As a comedian, the hit ones are- Trevor Noah: There’s a Gupta On My Stoep, Trevor Noah: Son of Patricia, and a few more.

Best Wishes to Trevor Noah for the upcoming days of his career. Also, hoping Trevor Noah’s Dating life is as great and successful as his professional one.