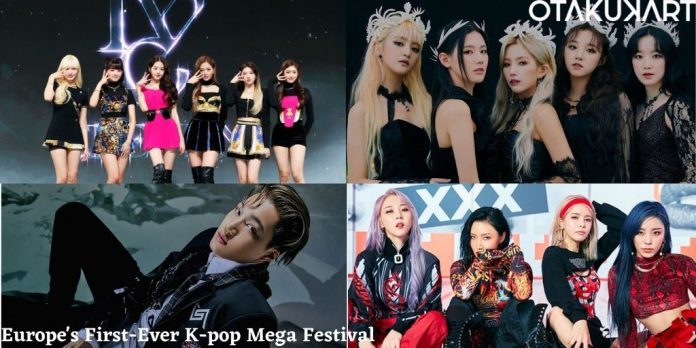 And here again, we’re back with the newest updates about the Korean wave. If you haven’t heard about this jaw-dropping news yet then you, our valuable audience have opened the gateway to the most astonishing yet thrilling news of the year. And for the fans who do have an idea of what we’re talking about keep scrolling down for all the detailed yet simpler versions of the details about “KPOP.FLEX”.

Lately, the K-pop industry simply does not exist as a music industry comprising of countless talented artists, it in fact has become an emotion for the fans globally. The way the fan following for all of the K-pop idols escalated in the past few years is quite remarkable. As Asians, we do know what a massive brand just the name K-pop is. But can you guys imagine it’s not only here, it exists like that in Europe as well? Amusing isn’t it?

Thus, to satisfy the piqued interest of the K-pop fans in Europe, first-time-ever a few companies knowing the huge profit it’ll amass are all set to present to you the biggest cultural festival of the year- “KPOP FLEX” that’ll be held in May. This mega-festival will also be home to some of the most captivating artworks by South Korean Boyband WINNER’s Ohnim and Yooyeon as well as solo artist Henry Lau. Not only can you take a tour through this mesmerizing gallery but also can buy the limited editions of these artworks from the main site. Continue reading for further intriguing details.

Are you guys ready for the most spectacular and largest Korean Cultural Festival ever? Yes, you read it right not only KPOP FLEX offers you to see a live concert of your favorite Korean Idols. However, it is also an opportunity to take a tour of Asain’s many cuisines as well as European culture.

From offering street cuisine to riding through the traditional Korean games, from seeing their favorite stars perform live to actually participating in entertaining events.
“KPOP.FLEX” is destined to create in the realm of cultural events.

Following are the Important Details about KPOP FLEX!

For the native fans as well as the international ones who wouldn’t be able to make it to this once-in-a-lifetime iconic festival, don’t be disheartened as South Korea’s Original Network, SBS is all set to record the live concerts and present them to you later.