Some Korean actresses out there don't just impress us with their exceptional acting skills but also with their never-fading beauty. Let's get to know about their real age! 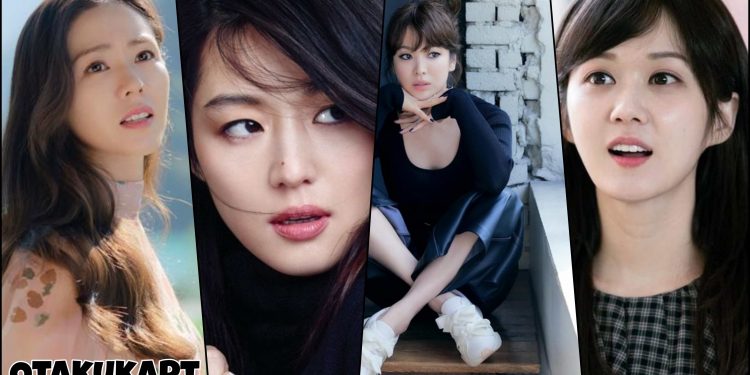 ‘Beauty fades with time’— not sure if this quote goes well with every individual on earth since the visuals of our veteran Korean beauty queens says otherwise! South Korea is already renowned all over the world for its nearly-flawless skin that looks extremely dewy and glossy. So being in the Korean entertainment industry means looking extremely pretty while meeting their high beauty standards.

While there isn’t any shortage of beautiful Korean actresses, only a few manage to radiate the same energy and charisma even after entering their 40s. These actresses have been active for decades, showcasing their talent through various movies and TV series. For doing so, one of the most important things is to dedicate a lot of time and effort to look their absolute best!

We have gathered the names of the top Korean actresses in their late 30s and 40s who looks much younger than their real age. Here we go!

Known for her roles in the mystery K-drama ‘The Lady in Dignity,’ the teen drama ‘Angry Mom’ and movies like ‘The Myth,’ Kim Hee Sun is that ‘Forever Angel-looking Mama’ whose looks are going against the years. Netizens consider her as a pioneer of glossy skin, and that’s pretty deserving considering the amount of time she gives to care for her skin. The actress has stated that even if she used to get back home late at night from the shoot, she never thought of skipping her nighttime skincare routine. No wonder we hardly get to see any wrinkles, sagging, or dark spots on her face!

One of the beautiful queens of Korean dramas, Gong Hyo Jin, is another example of timeless beauty. The actress has always been someone who pays close attention to her skincare and beauty regimes and looks how that has paid off! She looks as youthful and vibrant as she looked back when she played the character of a spunky aspiring chef in the romantic-comedy K-drama, ‘Pasta’. She is well-known for her adventurous and experimental wardrobe in both her dramas as well as real-life, with flared jeans, camisoles over t-shirts, and chokers way before they got trendy. Take some tips, girls!

First of all, we would like to congratulate all ‘Crash Landing on You’ fans! Actress Son Ye Jin, who has been a household name in the South Korean entertainment industry for years, is soon going to tie knots with her co-star, Hyun Bin. She has been delivering K-dramas, one better than the other belonging to a variety of genres, including ‘Something in the Rain’ and ‘A Moment to Remember’. It’s unbelievable how she still has beautiful, clear, and dewy skin giving her a glass-skin complexion. Often known as ‘Nation’s First Love,’ Son Ye Jin ambassadors one of the most influential fashion houses, Valentino, in South Korea. With her healthy and ageless skin, she indeed ages like a fine wine.

Yoo In Na is one of the most gorgeous Korean actresses who looks as stunning as she did a decade ago! This Hallyu star has been a former DJ and a part of various television series as a supporting actress, including ‘You Who Came From The Stars’ and ‘Guardian: The Lonely and Great God’, but with that incredibly attractive appearance, you gotta admit she deserves a lot more. With her clear, radiant skin, invisible pores, and straight brows, Yoo In Na is the epitome of Korean beauty.

When asked about her beauty secret, the 38-year-old actress stated that her weapon for being forever beautiful is just drinking lots and lots of water, enough to keep her hydrated all the time. For your information, she has been selected as the brand ambassador for South Korea’s most renowned online fashion platform, MUSINSA.

The Korean variety show ‘Running Man’ has experienced various changes ever since its run. Members have joined and left, but one thing that has remained constant is the show’s host, Song Ji Hyo, who looks not even a day older than how she looked ten years ago. On multiple occasions, we have seen her bare-faced, considering how she doesn’t like putting on too much makeup products, and at 40, her bare face is plump, ruddy, and shiny. Relax, you aren’t the only one getting envious here!

She began her career as a print model and supporting actress and gradually advanced to gain international popularity. She is known as the ‘Goddess of Child Face’ because of how she exudes a girlish air with her baby-like beauty. Seems like she grew up eating preservatives to keep her beautiful naturally!

Read: Top Eight ‘Comedy K-Drama’ That are Funny From Day One!

If there’s one South Korean beauty who has retained her fresh and radiant appearance like her early twenties, it’s actress Jang Nara. Born in 1981, Jang Nara has been active in the Korean acting industry since she was 20, and thanks to her baby-face and glowing, smooth skin, her appearance defies her age. Remember when she was cast in the 2009 K-drama ‘Babyfaced Beauty’? She has actually got to own that title in her real life as well, even after a decade!

According to the actress, the hack that keeps her youthful as ever is all because of her regular night facial massages. The way she has been aging without any trace of it on her face, we won’t be surprised if she manages to look even prettier ten years from now.

One of ‘The Troika,’ along with Jun Ji-Hyun and Kim Tae-hee, Song Hae Kyo is another example of evergreen beauty. There indeed isn’t a single individual who wouldn’t acknowledge the timeless beauty that veteran actress Song Hae Kyo possesses. It has already been sixteen years since the popular Korean drama ‘Full House’ was released, and looking at her now, we can conclude she doesn’t look like she has aged at all!

At the top of it, she has turned even more graceful and pretty over the years, as if she has been aging backwards! Despite her chic charms, she still owns her radiating, the innocent, and pure vibe of a 16-yead old. She is currently the ambassador for a luxurious brand, Fendi, becoming the first from her country to do so.

Jun Ji Hyun is one of the most sought-after actresses of South Korea who is known for her versatility as an actress and attractive appearance. She began her career as a commercial model but with the 2002 K-drama, ‘My Sassy Girl,’ her popularity began to reach out to domestic people. The actress has recently entered her 40s but take a brief look at her, does she look like someone older than 28? Instead, she is now a fashion icon with edgy and bold looks that only she can pull off! Seems like she might have stolen some anti-aging potion from her ‘My Love From the Star’ co-star, Kim Soo Hyun, who had played the character of an almost-immortal alien.

She is now the ambassador of several luxury houses, including Alexander McQueen making her the first-ever Korean to do so! She recently released genre series, ‘Jirisan’ has been the talk of the town in which the actress has played the role of a mountain ranger.

Kim Tae Hee is unofficially considered the most beautiful woman in South Korea, and just by looking at her for a second, you know why! Best known for her characters in K-dramas like ‘Love Story In Harvard,’ ‘My Princess,’ ‘Yong-Pal,’ ‘Iris,’ and ‘Hi Bye, Mama!,’ Kim Tae Hee has been in the acting industry for more than two decades. The keen eyes of her fans never fail to notice the youthful glow that she carries in spite of being a mother of two kids.

Girls, aren’t you curious about the type of magic she puts on her face with her skincare products to maintain such an aura! You must have heard of her name multiple times in K-dramas to compare a pretty woman’s beauty to that of her!