Top Eight ‘Comedy K-Drama’ That are Funny From Day One!

Laughter is the best medicine. So if you need a bit of laughter to brighten up your day, here you go! 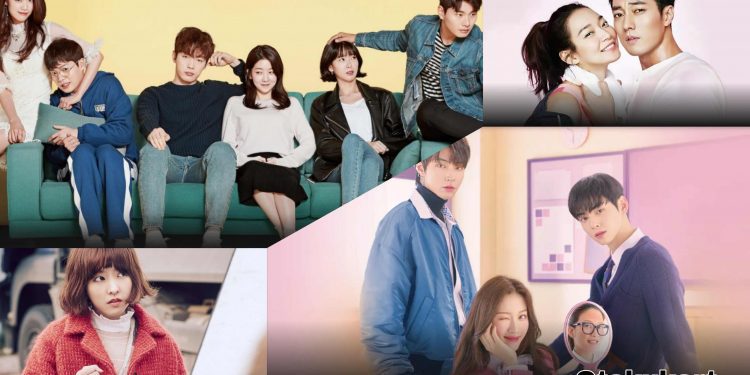 We might be a fan of mystery thrillers or horror fantasy K-dramas, but when we need to take our minds off things in our daily lives. Nothing works better than Korean comedy-dramas. The best part of this genre is that it can fit with every other category of K-dramas. In fact, without comedy, Kdramas with crime, psychology, or romance as their subjects aren’t as intriguing as they become after the addition of bits of humor! The Korean entertainment industry is often known to be producing some of the best comedy K-drama in the world that deals with ridiculously comical plot lines, top-notch funny characters delivering the most hysterical physical humor. Get your hands at them if you haven’t already!

We have made a list for you featuring the top eight best comedy K-drama of all time that will make you laugh non-stop. While you will find some of these funny from day one, others deliver some great social messages under the cloak of humor. Check them out now!

‘Fight for My Way’ might be the most relatable K-drama that you might be watching in a while. It’s about some ordinary people with dreams who are in need of an opportunity and healing in their life. While Ko Dong Man is a retired taekwondo athlete, now working in a mundane job, Choi Ae Ra used to be an aspiring television anchor who now works as a recipient at a departmental store. Life made them doubt themselves, made them stumble and fall, and now both of them are on the verge of giving up on their dreams. They have been best friends since they were children and believe in sticking to each other in need. The series showcases how Ae Ra and Dong Man end up following their dreams and finding the happiness that they deserve.

While the story might seem to be very inspirational, which it surely is, the storyline is amazingly balanced, with bits of comic scenes distributed between every few moments that keep the audience engaged and entertained. You might have already encountered the epic aegyo scene of Dong Man’s character on Instagram if you are a fan of the main actor, Park Seo Joon.

Just as the title, the series is equally extraordinary— starting from the unique plot to the twists and turns. The storyline follows a high school girl with a weak heart named Dan Oh, who suddenly comes to find that her entire existence has been under the control of an outsider. In fact, she’s not even real! She is just an extra character of a comic book which moves according to the wishes of the artist. Although the truth shakes her completely, she pulls herself together and decides to change the course of the story. Well, it was brave of her to think like that, but she fails every time— until one day when she meets an unnamed character, number thirteen, whose presence can actually influence the course of the comic. She names her Haru and works with him along with two other characters who are already aware of their truth.

However, changing her fate and preventing herself from a teenage death because of her heart disease seem more difficult than she had ever imagined as a past mystery gets in her way. The sassiness of the female lead and the innocence of the male lead are sure to make you fall in love with the K-drama. As a high-school youth drama, the characters as well as the situations have been kept very entertaining and farce.

We can’t promise that the series will not make you cry a river at times, but if you can bear with that, we assure you that ‘She was Pretty’ is full of positive energy and laughter. Moreover, there are plenty of elements for you to love, too, including the character of the second lead. The story revolves around a woman named Kim Hye Jin, once a beautiful and rich teenager who had lost all her fortune and good looks over the years. When her long-separated first love, Ji Sung Joon, from her school days, suddenly offers to meet her, she gets very excited until she realizes how shameful it would be to meet him with her current appearance. She decides to end it with one meeting, sending her best friend, Min Hari, in place of herself to deal with the situation.

While she finally manages to secure a job, she finds out that she is going to work under Sung Joon. On the other hand, Sung Joon doesn’t have any intention of losing his childhood love once again. And thus begins a roller coaster ride of misunderstandings, hiding secrets, overly awkward and hilarious situations!

Okay, so the first thing that needs to be said is the title should be changed to ‘Everything Wrong with Mr. Young Joon!’ Right from the first episode, if there’s a character who needs a little dose of normality in his life, then it’s our very own male lead, Lee Young Joon, the president of a big business empire. But it’s because of him that the show ended up being one of the most enjoyable and funny ones, isn’t it? When the narcissistic and self-absorbed CEO, Young Joon comes to know that his secretary, Kim Mi So, who has been working for him for nine years, is quitting her job, he falls into the state of denial.

After multiple failed attempts, he proposes to marry her just to have her by his side. To all my girl readers, that’s strictly a K-drama thing so don’t even dream about something like this! The series is full of hilarious misunderstandings and showcases the chemistry between the leads to-die-for.

You might have heard of this K-drama multiple times from your friends when you were arranging your K-drama starter pack. And the very reason for it is how entertaining and funny it is, along with a simple but well-written storyline. The story revolves around a lawyer in her early thirties named Kang Joo Eun. Once the epitome of beauty, Joo Eun has lost her popularity after following an unhealthy living over the years and is not an obese person. Even the guy who had been dating her for fifteen years dumps her.

She comes across a Hollywood star trainer named Kim Yeong Ho, who returns to Korea after getting into a scandal. He ends up agreeing to help Joo Eun cut her fat by becoming her personal trainer. However, while they work together on her physical transformation, their bond grows stronger, and they ultimately fall in love with each other.

Penned down by the same writer as the one of ‘Extraordinary You,’ True Beauty is another extremely funny K-dramas set up in a high school. The writers have done such impressive work that even the serious scenes would seem hilarious to you once you start watching the drama! The story revolves around a so-called ugly girl named Lim Joo-Gyung, who is desperate to change the world’s outlook on her, gets a makeover before enrolling herself at her new high school. Although her makeup skills help her hide the secret about her bare face, she keeps falling into situations that can expose her anytime.

One day, her handsome, not-so-friendly but smart classmate Lee Su Ho discovers the secret but promises not to reveal it to anyone if she abides by all his demands. There’s the existence of a bad boy character, too, Han Seo Joon, who keeps crossing paths with Lim Joo-Gyung but is rivals to Su ho. The love triangle will definitely give you a hard time choosing your ship! If you start watching this series at night, we suggest you make sure not to wake up your family members with your laughing!

We wonder if there’s anyone who didn’t fall off their sofa laughing while watching our strong girl beat the handicapped gangster for the hundredth time. It’s a miracle that he still managed to survive! One of the funniest K-dramas of all time, ‘Strong Woman Do Bong Soon’ is about a cute and adorable woman named Do Bong Soon, looking for a permanent job. However, it would be a mistake to assume her innocent appearance as her weakness. An un-measurable amount of physical strength runs in her veins, inherited from her long line of female ancestors, which she can use to protect herself and the people around her.

When the CEO of a gaming company, Ahn Min Hyuk, witnesses her using her super-strength to discipline some gangsters, she immediately gets interested in her. He hires her as his personal bodyguard to help him catch someone messing with his life. It’s amazing how the series has been made with a perfect balance of fluff and humor. Even the existing love triangle and the so-called villains are funny in their own way! Rumors say that the series has been renewed for a new season. If that’s true, the fans of this show really need to celebrate!

No list of funny K-dramas can get over without the inclusion of the 2018 series, ‘Welcome to Waikiki’, and we are not even exaggerating! If you are looking for pure comedy without any seriousness or deep setting, this might be your call. The story revolves around three best friends, Dong Goo, Joon Ki, and Doo Shik, who run together a guest house named ‘Waikiki,’ with the dreams of becoming rich and then fulfilling their respective dreams. While Dong Goo has always wanted to become a film director and Joon Ki keeps working hard to make his name in the acting world, the youngest of them, Doo Shik, is a freelance writer.

Their not-so-peaceful life becomes more chaotic when one day, they find a little baby girl in their guest house. After a series of incidents, the baby, her single mother, Dong Goo’s sister, and his ex-girlfriend begin to live under the same roof along with the other three male members. Well, the situation gets as uncomfortable and awkward as you might be thinking.

‘Paranormal Activity Next Of Kin’ Ending Explained: What Happens In The End?

Will Greed Die in Fullmetal Alchemist? The Homunculus’ Fate and Death