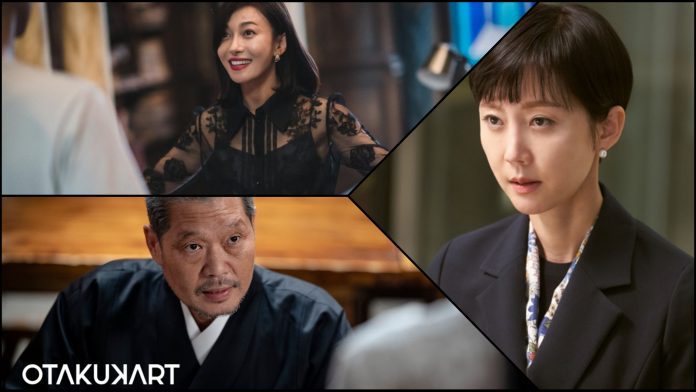 These days, we rarely find K-dramas that have parents objecting to the relationship of their children. Instead, we sometimes have even more evil parent characters who make our blood boil whenever they appear on the screen! While some of them have endless expectations from their children who need to clean up their messes, others use their children as puppets for their own success and prosperity. Thankfully most of the K-drama parents in recent years are more supportive and caring, setting a good example in society. But the other section of the community warns us not to give way to the evil acts of people just because they are our parents. We have compiled for you possibly the worst K-drama parents we have ever come across who have blown our minds completely.

We should take a moment to thank God for being good enough not to let us be born to sinful parents like the ones mentioned here! Let’s check them out without any delay!

Song Cha Ok is In ha’s estranged mother, whom none of us would want to have. She is a cold and merciless woman who abandons her family for the sake of her career. As a woman, she is definitely impressive and has ended up becoming one of the most praiseworthy news anchors in South Korea. However, no matter how much she redeems herself, she will remain a terrible mother who made her daughter desperate for her mother’s love and appreciation for years.

She made it crystal clear that In Ha’s well-being meant the least to her and that in the last fifteen years during which she was away from her daughter, she didn’t really have the time to long for her child. The least she could do was let go of her towering ego and regain her morality a little towards the end of the series.

The 2018 Netflix K-drama, ‘Sky Castle,’ known for being the second-highest-rated cable show, is not void of evil characters. Starting from the coach to the law school professor and doctor, the show seems to be a competitive survival game where every character seems to beat the others and fulfill their selfish ends. Han Seo Jin is another such character whose actions define how she has ended up on the list of the worst mother! No doubt, she has an extremely charismatic aura as a perfect woman who not only helps her husband in his work but also raises her two daughters.

She is an over-zealous mother who is simply obsessed with educating her daughters and getting them enrolled in Seoul National University of medical school. No matter what it takes, she is willing to do anything to get what she needs to the point of cruelty. Moreover, she has been covering up a dark secret from her past. The way she hides her true self all the time and puts on an appearance might end up giving you goosebumps!

The classic rom-com K-drama, ‘Boys Over Flowers,’ which has been adapted from the original Japanese manga series of the 90s, contains this typical Asian troupe of the male lead’s mother playing tricks to separate her son from dating his poor girlfriend. Well, you might have watched several adaptations of this show simply because of the old-school vibes it presents. But in every one of them, the mother is equally detestable. Kang Hee Soo is a prime businesswoman in South Korea and a mother of two, Gu Jun Hee and Jun Pyo. However, throughout the series, she keeps on doing morally questionable things to separate her children from choosing the love of their life.

She had been incapable of providing a comfortable growing environment to her children and has always prioritized her company over their happiness. At first, Kang Hee Soo destroys Gu Jun Hee’s life by separating her from her boyfriend years ago and then tries to do the same to Jun Pyo. Each time she wedges a rift between Jun Pyo and Jan Di, it ends up hurting her son. Still, this doesn’t stop her from putting effort into making them suffer. No matter what’s the reason behind her actions, she is still a bad K-drama parent, isn’t she?

Also Read: K-Pop Idols Who We Are Dying To See In Rom-Com K-Dramas!

For some reason, we K-drama addicts find problematic families extremely fascinating! Take the example of Kim Tan from ‘The Hiers,’ who is surrounded by one of the most complicated families. With his father, Kim Nam Yun, at the peak of this dysfunctional family, who is married to someone else but has secretly kept a mistress at his house, Kim Tan is Nam Yun’s illegitimate son. However, he allows his wife to act like Kim Tan’s real mother in front of the world in order to prevent his reputation from tarnishing. So we already know that this man is not a good person. However, we might have forgiven him had he been a good father to his sons.

He cares only about the growth of his company and encourages rivalry between his two sons, who used to be very close and caring towards each other. Whichever of his two sons is capable of making profits in the business. He would prioritize him at any point in time. He becomes an obstacle in the love life of his sons, who aren’t supposed to fall for girls from poor families. He plays various tricks to dampen the happiness of Kim Tan and Eun Sang as soon as he finds that his son likes the latter. However, he makes sure not to get his hands dirty and lets others execute his evil deeds.

Jang Dae Hee from the 2020 K-drama, ‘Itaewon Class,’ is pure evil, no matter how you look at his actions. He started off as a small bar owner who turned himself into a self-made CEO of a large franchise company. However, as he succeeds, he develops a firm belief in power and authority, which he passes to his son, Jang Geun Won. Not only does Jang Dae Hee neglect his son’s extensive bullying at his high school, but he also encourages him to overpower the weak. When Jang Geun Won accidentally kills Park Saeroyi’s father, instead of punishing him, he takes advantage of his powers to protect his son.

He was already a bad father, responsible for the crooked nature of his son, but we see his true colors only when he deserts his son and sends him to prison when Geun Won’s previous crimes are revealed to the public. Dae Hee gets so drunk on success and power that he sacrifices the lives of his sons in order to protect his company, making him one of the worst K-drama parents. Well, at least his downfall was pretty satisfying to watch!

First of all, let’s take a bow to the fantabulous acting performance by Jang Young Nam, who portrayed the evil witch character of Moon Young’s mother in ‘It’s Okay to Not Be Okay’. She was introduced in the series as the kind and just head nurse of OK Psychiatric Hospital. Her true self was revealed only towards the end of the series, which came as one of the biggest plot twists of the K-dramaland ever! She has been a manipulative and monstrous Do Hui Jae in disguise who is notorious for her past sins. Apart from brutally murdering Gang Tae and Sang Tae’s mother over a petty reason and ruining their lives, this woman doesn’t even spare her husband and only child, Moon Young.

As a control-freak mother, she raises her daughter to be a cold and emotional person devoid of any warmth in her eyes which ends up giving her antisocial personality disorder. Despite coming out of her umbrella, Ku Moon Young’s trauma doesn’t leave her alone. Do Hui Jae goes to the extent of going under the knife to watch her husband going insane and dying naturally in the course of twenty years, who had tried to kill her years ago. Poor Ku Moon Young, she must have to go through loads of sh*t in her life because of the show’s writer who presented her with one of the worst K-drama parents!