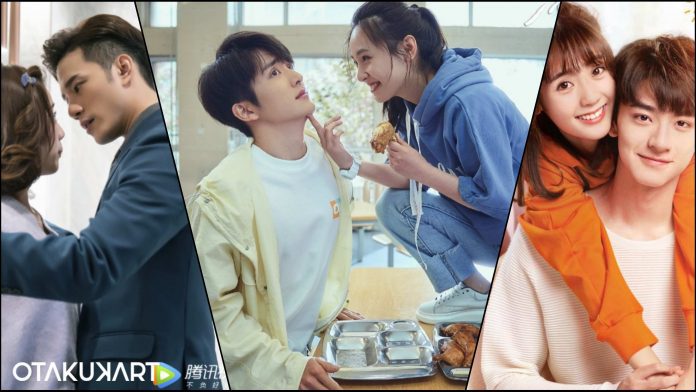 No matter what genre of Chinese dramas you prefer, when it comes to the rom-com genre, C-dramas can never disappoint. While the idea of romance on the silver screen isn’t very relatable most of the time, it rarely happens that someone doesn’t romanticize the idea of romance. Thankfully, the Chinese entertainment industry is loaded with worth-watching amusing and entertaining series that can keep you busy for a whole year! No matter in what state your mood is, a little romance and balanced humor might be enough to cheer you up!

On top of it, the quality and direction of C-dramas in recent years have shown so much improvement that they might end up being as good as K-dramas in the coming years. If you are looking for the best rom-com C-dramas that can lighten up your mood after a long tiring day, search no more!

Here is a well-compiled list of the top six such shows that will definitely make your heart flutter. Add them to your watchlist now!

‘Put Your Head on My Shoulder’ is a comfort C-drama for numerous people, and now it’s time you make it yours too! A sweet and adorable rom-com C-drama, the story revolves around a graduating student named Situ Mo, majoring in accounting, who has been unclear about her future plans. She crosses paths with Gu Weiyi, a genius physics student with an introverted personality. While they don’t seem to like each other at first, as time passes, they find themselves getting involved in each other’s lives and even end up living together in the same house.

With personalities that are polar apart from each other, they gradually begin to find comfort in each other. However, the genius Gu Weiyi doesn’t really know how to impress a girl with little knowledge of physics! Their daily interactions, Gu Weiyi’s thoughtful nature, and Situ Mo’s obsession with Doraemon create a comfortable and entertaining environment for the viewers.

Girls who think E-sports is only for the boys should definitely consider watching this drama. Not only will you get to see some top-notch animations that might make you interested in gaming, but also a line-up of excessively good-looking and attractive players who will leave you spellbound! Tune in to the first episode, and you will know we aren’t exaggerating at all! Coming to the story, ‘Falling Into Your Smile’ has been adapted from a novel by Qing Mei that centers on a petite and smart girl named Tong Yao who is offered to be a professional gamer by the all-male ZGDX OPL team owing to her skills of a budding amateur gamer.

With the dream of her name in the male-dominated world of pro players, Tong Yao joins the team. While she tries to adjust herself to the new environment, she realizes the only one with whom she doesn’t get along much is their captain, Lu Si Cheng, who leaves no opportunity to tease her. One of the highest-rated rom-com C-dramas, ‘Falling Into Your Smile,’ will definitely put a smile on your face!

You know a Chinese drama is going to be fun to watch if it stars Steven Zhang and Janice Wu in lead roles! Set in a prestigious university for ice-sports aspirants, the show centers on a former short-track speed skating girl named Tang Xue, who had to give up on her dreams because of a leg injury. She enters the university as a veterinary student and comes across the ice hockey god of their university, Li Yu Bing. In fact, they have been friends in their elementary school.

However, young Li Yu Bing was a timid and cowardly kid who used to get bullied by the headstrong and playful Tang Xue. He decides to take his revenge now that he is strong and confident. While Tang Xue longs to get back on the ice rack, she agrees to be Yu Bing’s personal assistance in the hope of earning some extra pence. This marks the beginning of their journey of becoming enemies to lovers while striving to fulfill their respective dreams.

Watching ‘Professional Single’ can turn out to be a guilty pleasure for people having a kink for ‘height difference’. If you are looking for fluff and typical C-drama troupes, the show has delivered all of it. Set against the backdrop of an art college, the story follows two individuals, Yuan Qian and Qin Shen, who are completely different from each other except for the fact that both of them have been single since birth, that is, have no prior experience in dating. While Qin Shen is the handsome and popular campus hottie with a disciplined and cold personality, Yuan Qian is the girl-next-door with a strong-willed temperament.

The series showcases the struggles of a group of art students in pursuing their dreams while experiencing the sweet first romance. If nothing, the flirty interactions between Yuan Qian and Qin Shen while love blossoms between the two are enough to make you feel single to the power of infinity. On top of it, the OSTs of this rom-com C-drama serve as the cherry on the top!

A tip from us— if you wanna enjoy this rom-com C-drama to your fullest, all you need to do is to turn off your brain and stop looking for logic in every place. The lead actors’ performance, comic timing, and body language are enough to have you laughing on the floor of your bedroom! Jiang Yi plays the character of a renowned actor and singer in the entertainment industry. However, when it comes to expressing himself, he turns out to be a stone-faced and distant person. On the other hand, Yu Sheng Sheng is a bright and energetic reporter from the entertainment department who keeps looking for gossip.

A sudden turn of events takes place, and an accident results in them swapping their bodies. Caught off-guard by the sudden change of environment, the two keep falling into weird situations while living each other’s life. Some scenes even make the spectators feel second-hand embarrassment! Bickering changes into friendship, and before they realize it, the two fall in love!

‘My Girlfriend is an Alien’ is that one C-drama that can never disappoint a person, irrespective of whether he is a beginner or a veteran! Fantasy romance between two different species coupled with exceptional comedy, the show is one of the most entertaining C-dramas ever. The story revolves around the young CEO of a company named Fang Leng, who suffers from a peculiar condition because of which he forgets the females around him every time it rains. During such a rainy night, he gets into a car accident and almost dies before an alien from another planet saves him.

However, in the process, she loses her device to go back to her home planet. Left all alone on a new planet with her assistant, now trapped in the body of a tortoise, Chai Xiao Qi sets out to explore the world and look for her key to return home with her extraordinary superpowers. However, fate brings her closer to Fang Leng again and again till he falls in love with her, knowing full well he might forget her by the next time it rains.