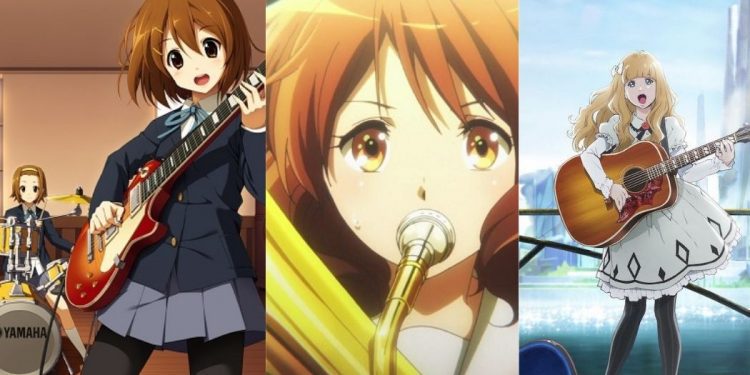 Music is something that can make your mood do a summer salt flip and change within minutes. You can seek the comfort that music provides with any state of mind and emotions. There is always something new that will suit the emotion and your current personality. But what is similar to listening to music but not directly? In some or other way, people like to watch a story that either provides them good quality music or is based on the theme of music. There are different types of stories revolving around different characters but similar in the theme of Music. Here is a list of not any common but anime series with is based on the theme of Music. On top of it, the list below will give you an insight into the top 10 ruling music anime series of all time.

The things that an anime series can do is to land a great influence on the viewers. After watching Haikyuu, people get inspired for playing volleyball, Blue Period made people get inspired for becoming artists. Here are some anime series that will surely inspire me to either become a musician, start a band or get into vocal classes. Other than this, these series are equally capable of taking your mind to a state of peace with their beautiful picturization and soothing music, which are going to be there in the series. Make note that these anime series are not judged on the basis of the music quality but solely on the theme and how they depicted the concept of music in an eye-catching way.

Sound of the Sky, also known as Sora no Woto is a Japanese anime series that was produced by A-1 Pictures. Unlike many other anime series which are adapted from manga, Sound of the Sky anime is the one that was later adapted into a manga. The plot of the series goes around the like of a young girl named Kanata Sorami, who is highly inspired to join the military. She was inspired by a rendition of “Amazing Grace” by a mysterious trumpeter of the Helvetian Army. Later, she learned to play trumpet under the guidance of Sergeant Rio Kazumiya. In amidst the situation of the war, Kanata manga to find some peace with music. She started to play music along with her fellow crew member to take joy in the life of war-weary residents.

Initially released as a game and later adapted into a manga series than into an anime series, IDOLiSH7 has come a long way. The game was produced by Bandai Namco Online and was released on 20th August 2015. As for the manga series, it was written by Nokoshi Yamada and dropped its first chapter in 2015, and is still continuing will new chapter. The anime adaption is available in three seasons, where Season 1 was released on 7th January 2018 and consists of 17 episodes. The plot of the anime goes around the life of a girl named Tsumugi Takanashi, who is an inexperienced manga of a new idol group named IDOLiSH7. The series depicted the struggles she faced while training them and overcoming the hardships of the entertainment industry.

The plot of the anime series Hibike! Euphonium goes around a music club called The Kitauji High School Concert Band Club. The club once participated in a national tournament later won it and remained at the top until its adviser changed. Now, the club hardly manages to reach the qualifiers, in short, they are not doing really good. As a new adviser is appointed there, performance changed drastically. The new instructor made their hard training schedules and motivated them to keep going. However, the students fought for performing solo, and some of them give preference to their studies hence quitting the group. The creator can’t let the series end like this, finally when the time of the tournament arrived, the club won the tournament.

K-on! anime series is an anime adaption of a four-panel manga series by Kakifly. The anime adaption was released on 3rd April 2009 and consists of 39 episodes along with 2 OVAs. A few games and I’m adaption of the series was also released, making the series one of the top-rated music theme anime series. The plot of the series goes around the life of five young high school girls who are struggling to get the life to the music club of their school. Ritsu Tainaka and Tsumugi Kotobuki spend their school days practicing their music in their music club alone, but later to save their club, they started to gather members for it. They formed a band and named their club as “Ligh music club”.

The series has some similarities with the other anime series on the list, which is “Your lie in April” but as you will move deeper, you will get to know that they are different. It also follows the other theme of romance as the story goes around the life of the protagonist Shinichi Chiaki. The young manga aspires to become a musician and have a dream to fly to Europe and perform in front of elites. However, the twist in the plot is that he has a fear to get the light and stay grounded in Japan. As now he is in the fourth year of the music university, he met a girl named Megumi Noda and was impressed by her after listening to her playing piano. Now, Shinichi wonders if Megumi can be the girl which can create a difference in his life.

Unlike any other anime series on the list, Carole and Tuesday can also be refed as a fantasy and music theme anime series. Its plot follows the life of a young girl named Tuesday Simmons who lives on a partially formed Mars in the future. As she is fed with her life, she left the house of her political father to pursue her dreams to become a musician. She left with her guitar and visited Alba City. There she met a young boy named Carole Stanley, who is a refugee from the earth and also an aspiring musician. They both started their journey as they team up as two singers and songwriters and named their duo “Carole and Tuesday”.

4. Kids on the Slope

The Japanese manga series Kids on the Slope is written and demonstrated by Yuki Kodama. The series was published by Shogakukan publications which dropped out its very first chapter on 28th September 2007. The manga series concluded with a total of 10 volumes and 28th July 2012. The anime adaption of the series was also been released that was produced by MAPPA and Tezuka Productions Studio. It dropped out its first episode on 12th April 2012, and the series ended with 12 episodes on 28th June 2012. The protagonist of the series named Kaoru Nishimi, along with his two friends Sentarou and Ritsuko, created a band as followed his passion for music.

As he has entered the top 3 of the list, the competition is going to grow tougher. The plot of the anime series Nana makes it of the most loved anime series from the Josei genre. It centers on the life of two young women, both sharing the same name Nana. They met by our coincidence as they sat on the train to Tokyo, stepping out to start the new phases of their lives. Nana Komatsu is planning to join her boyfriend at an art school, while Nana Osaki is planning to become a punk musician. The main focus of the series is to show both Nana’s relationship and how their plans and ambitions work. The other thing that made the series so popular is its art and anime that is so beautiful to our eyes.

Given is a Japanese manga series by Natsuki Kizu published by Shinshokan Publication. It dropped out its first chapter on 30th April 2013 and is still ongoing. The anime adaption of the manga was produced by Lerche Studio and was released on 11th July 2019. The plot of the anime series Given is divided into two major arcs. The first arc focuses on the relationship of Ritsuka and Mafuyu as they create their own music band and move up to their first live performance. The second arc goes around the relationship between Akihiko and Haruki, who follow the band and are preparing for their first music festival. As the anime is not concluded yet, it’s still moving off with the third arc that focuses on the relationship between Hiiragi and Shizusumi.

1. Your Lie in April

The reason why Your lie in April is at the top of the list is that it is the most soothing yet interesting anime series on the list targeting the theme of music. Other than this, it also centers concept of romance as it follows the relationship of the protagonist Tsubaki and Kosei. The plot goes around the life of two musicians one of them is a violinist, and the other is a pianist. As they began the journey playing music together, they both fall in love with each other.

But life is not only about beautiful happenings, the violinist Kaori was caught by an illness and needs a life-saving operation which is extremely dangerous. The anime is adapted from a manga series that was released on 6th April 2011 and concluded with 11 tankobon volumes. As for the anime series, it was produced by A-1 Pictures and was released on 9th October 2014.

ALSO READ: Teppen!!! Anime Announced: What is it All About?