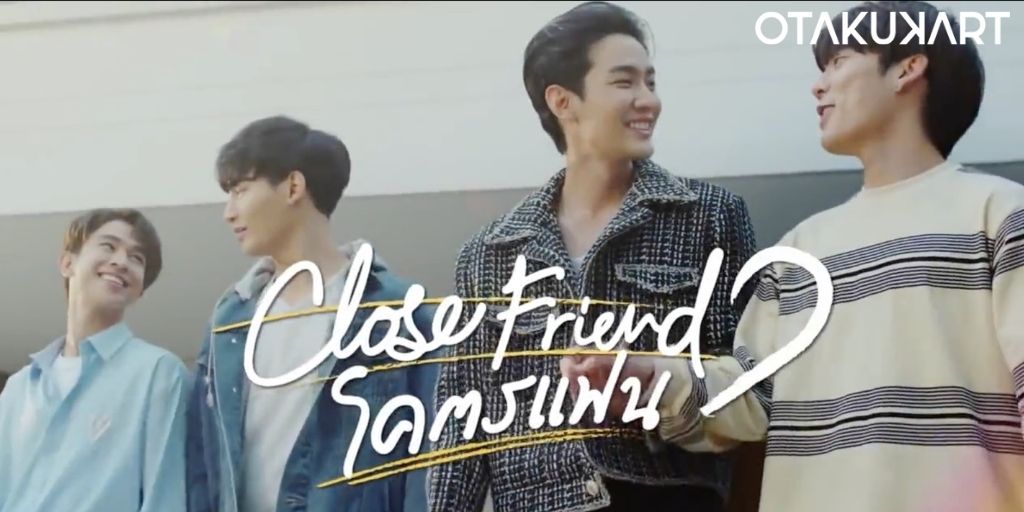 Much loved Thai BL series Close Friends Season 2 is here, as viewers are waiting for Episode 4. The ViuTV drama is seeing a successful run this season too. The first season showed us different types of love that existed among six pairs of men. The second season is an extension of the first season of the series. This season is focused on 2 couples, Pierce and Typhoon. And the other couple is Ray and Jedi. The drama follows their struggles and journey as a couple.

They have connected but different storylines in their work. Three main characters even have the same workspace. Hence a couple’s workspace romance is also shown. The 6 episode long series has already released its three episodes and is halfway there. The 35-minute-long episodes are a delight to watch for the ones who don’t want to be invested in a full-length drama. A couple of misunderstandings and problems have already arisen, and fans can’t help but be curious about what lies ahead. Read ahead, for we will be sharing the release date, streaming details, and a synopsis of all that has happened till now. For details on Episode 4 of Close Friends Season 2, continue reading.

As we mentioned above, the series follows the lives of 2 couples and the predicaments they are faced with. For Pierce and Typhoon, their problem is regarding their families. Meanwhile, for Jedi and Ray, it’s on the professional level. Pierce introduces Typhoon to his family, not as his boyfriend but as his junior. This leaves Typhoon visibly disappointed. Whereas Jedi is an artist, who is being paired with Milin, an artist from his label, much to Ray’s disapproval. But since they both have a secret relationship, Ray can’t be fully mad at Jedi.

In episode 3, we see Ray confront Jedi about this ship pairing his label is planning. However, Jedi puts his mind to rest by telling him that the only person he loves is Ray. But his peers at work can’t help but pair Milin and Jedi up at any chance they get. They just want to share their ship to make more people interested in Milin’s work and gain publicity. Further, Milin, too, is showing some passive interest in Jedi, which is bound to bring trouble to lovers’ paradise. Also, in the last scene, we see a paparazzi who captures Jedi and Ray’s private moments, which is surely meant to cause some serious scandal. Meanwhile, music producer Pierce and Typhoon work in the same company, the same label Jedi is under. Typhoon faces problems at work, but his main concern arises when Pierce confronts his parents. Pierce’s parents ask him upright if he likes Typhoon. However, Pierce refuses to answer, making Typhoon upset. Since both the storylines ended on some serious cliffhangers, the wait for Episode 4 of Close Friends has become unbearable. At the end of the episode, we got a preview where we see Jedi’s boss at his label asked him to break up with Ray now that pictures of him and Ray must’ve leaked. Meanwhile, Typhoon questions Pierce if he is embarrassed by their relationship that he finds it so difficult to accept in front of others. Well, just like Typhoon, we also want an answer. And for that, we have to watch Season 2 Episode 4 of Close Friends.

Close Friends Season 2 Episode 4 will release on 26 May 2022. The 6 episode long drama is almost nearing its conclusion, and viewers are excited about what will happen next. The drama releases a new episode every Thursday. The show began airing on 5 May 2022 and will end on 9 June 2022. Hence, you still have two weeks to catch up on the show if you haven’t watched it yet. Meanwhile, you can also watch season 1 of the drama.

The drama was originally released on ViuTV. For us international viewers who don’t have viu, the drama is available on Viki. The episodes’ release times will vary for viewers across the world. For the viewers in the US, the timing would be 9:00 am. For the UK, it is 2 pm, 6:30 pm for viewers in India, 11:00 pm in Australia, and 9:00 am for Canadian watchers.