Ray Liotta died on May 26, 2022, in his sleep in the Dominican Republic while filming a movie. He leaves behind a legacy of great films that are worth revisiting after his parting. Furthermore, this talented Italian-American actor brought to life some iconic characters in cinematographic masterpieces of the twentieth century. We will miss him dearly. These are the best Ray Liotta films.

From mafia movies to action films and dramas, Ray Liotta lived and breath cinema. His work in over sixty Hollywood feature films made great characters that made us laugh and cry. Who can forget him as Henry Hill or as that mean cop? Today, we’re honoring him with some of these films.

These are some of the late Ray Liotta best movies

Some of these films are widely known, others not so much. Some feature Ray in a leading role, and others feature him in a supporting role. Still, they’re movies worth watching. We’re telling you where you can check them out and giving you a brief summary. Now let’s check out some of Ray Liotta’s best films!

Ted Demme directed this crime drama starring Johnny Depp, Penélope Cruz, Franka Potente, Paul Reubens, Jordi Molla and Ray Liotta. Here, Liotta plays a supporting role. More specifically, he plays Johnny Depp’s father. The story goes like this, in the 1950s, a  boy by the name of George Jung grows up in a poor family. His mother nags her husband, who is struggling to make ends meet for the family.

George’s father’s inability to make a living is finally revealed, and the family’s finances go bust. But George does not want the same thing to happen to him. What does he do? He and his friend Tuna start selling marijuana in the 1960s. He becomes a massive dealer in California in the 1960s. But he ends up in jail, where he discovers the wonders of cocaine with a Colombian connection directly to Pablo Escobar. As a result, when he is released, he becomes wealthy by bringing cocaine to America. However, he quickly pays the price. If you want to watch this one, go to Netflix.

Directed by Joe Carnaha, Smokin’ Aces has an ensemble cast made up of Ben Affleck, Andy Garcia, Ryan Reynolds, Alicia Keys, Jeremy Piven, Ray Liotta, David Proval, Chris Pine, and Jason Bateman. It’s a crime thriller film set in Las Vegas that tells the story of a magician that became an informant to the FBI.

After the mafia learns that he’s a snitch, three separate teams of bounty hunters set out to kill him as he’s holed out in his Las Vegas suite full of strippers and cocaine. What ensues is a dramatic battle between those who want to kill him and the authorities that want to save him. Additionally, the soundtrack, editing, and cinematography of the movie were done by Mauro Fiore, who also did work for Antoine Fuqua’s “Training Day,” and most recently, he did the photography for “Spider-Man: No Way Home”. Lastly, if you want to watch Smokin’ Aces, you can stream it from Starz, DirecTV, and Spectrum on Demand.

Simon Wincer directed this drama-comedy war film based upon a true story during the Vietnam War starring Danny Glover, Ray Liotta, Denis Leary, Doug E. Doug, and Corin Nema. It tells the story of a group of Green Beret operatives tasked with moving a live elephant deep in the jungles of Vietnam across the Ho Chi Mihn trail to another location to gain the trust of some villagers that will give the US Army critical intelligence information concerning the movements of the North Vietcong Army. What ensues is a funny and heartwarming story that tells the great lengths to which these men had to go to move the animal from point A to point B. Lastly, Operation Dumbo Drop is available on Disney+ and Apple iTunes.

Alan Taylor worked with David Chase to direct this great prequel of The Sopranos set in New Jersey in the late 1960s to tell the story of Dickie Moltisanti and how Tony Soprano came to become a mobster. In this film, Liotta plays two characters, twin brothers, Sally and Hollywood Dick Moltisanti. Additionally, the film also stars Michael Gandolfini, Vera Farmiga, Joey Diaz, Corey Stoll, and Leslie Odom Jr. Lastly, The Many Saints of Newark is available for streaming on HBO Max.

The Many Saints of Newark Trailer

Academy Award-winner director Jonathan Demme directs Melanie Griffith, Ray Liotta, and Jeff Daniels in this action-romance screwball comedy movie. In this flick, a free-will woman named Lulu kidnaps a yuppie banker for a weekend full of adventures that ensue dangerous liaisons the moment the woman’s ex-convict hubby enters the picture. You can stream this one from Hoopla, The Criterion Channel, Tubi, Red Box, and Pluto TV.

Ridley Scott directed Anthony Hopkins, Julianne Moore, Giancarlo Giannini, Gary Oldman, and Ray Liotta in this crime horror film thriller sequel to the laureated 1991 film “The Silence of The Lambs,” where we see what happened after Hannibal Lecter escaped from prison. Here, Ray Liotta plays a Justice Department officer named Paul Krendler, who makes life very difficult for Clarice Starling, and an enamored Hannibal Lecter decides to punish Krendler by feeding him his own brain in an unforgettable scene that will put you to the edge of your seat. Lastly, if you want to stream Hannibal, you can do it from Spectrum on Demand, Starz, and DirecTV.

Anthony Hopkins as Dr. Lecter and Ray Liotta as Paul Krendler in “Hannibal”

Noah Baumbach directed Scarlett Johansson, Adam Driver, Laura Dern, Ray Liotta, and Alan Alda in Marriage Story. It tells the story of a married couple made up of an actress and a theater director as they are going through a hellish divorce. In this movie, Ray Liotta plays Jay Marotta, a divorce attorney counselor hired by Adam Driver’s character. The dramatic personnæ in this film is amazing, and it’s a heartbreaking story. It will make you cry. If you wish to watch this movie, you must go to Netflix because it’s an exclusive movie there.

James Mangold directed Sylvester Stallone, Annabella Sciorra, Janeane Garofalo, Robert DeNiro, Harvey Keitel, Arthur Nascarella, and Frank Vincent in this neo-noir drama film about crime in a tiny New Jersey town where a local sheriff enters into a major beef with some corrupt NYPD officers that are doing some nasty shenanigans there. If you watched the Sopranos, you’d see many familiar faces here like Edie Falco and even Tony Sirico. Lastly, Cop Land is available for streaming on HBO Max, Max Go, Spectrum on Demand, HBO GO, and Directv. 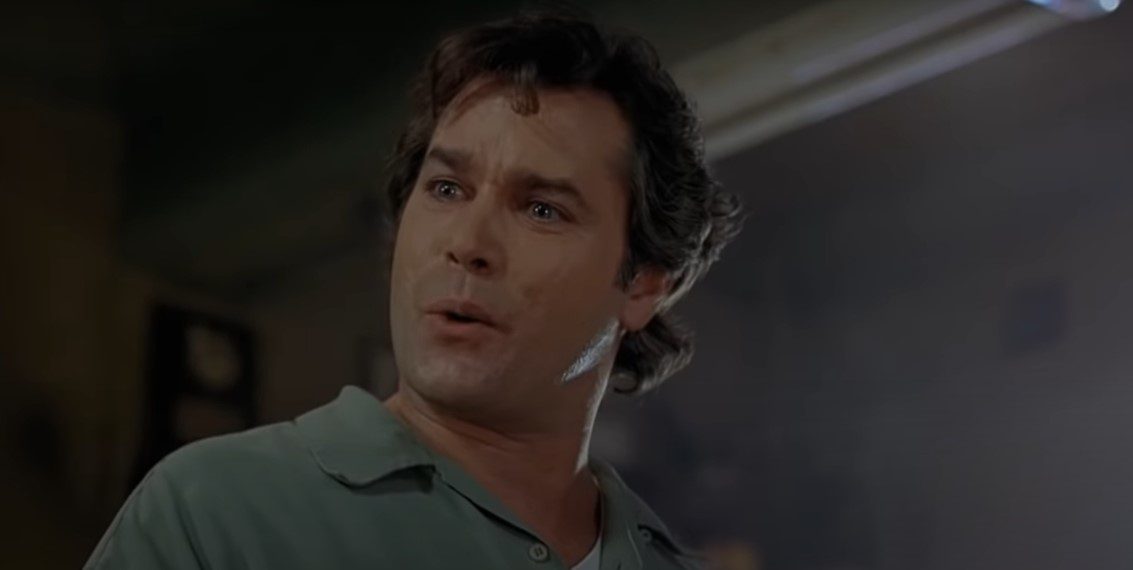 Phil Alden Robinson directed this drama film starring Kevin Costner, Burt Lancaster, Amy Madigan, the late Art LaFleur, and James Earl Jones. In this movie, Liotta plays Shoeless Joe Jackson. And the plot is about a man —played by Costner— who makes a baseball field in his cornfields that happens to attract the ghosts of dead baseball players. This one is an emotional movie that features a great performance by Liotta and great chemistry with Kevin Costner. This role is definitely one of his best. Lastly, you can watch this movie on Amazon Prime Video.

We’re crowning our countdown with the movie that made Ray Liotta so famous. Goodfellas is a true-story crime drama directed by Martin Scorsese starring Robert DeNiro, Lorraine Bracco, Joe Pesci —in a role that earned him an Academy Award for Best Supporting Actor— Paul Sorvino and Ray Liotta about the life of a gangster and his friends in a tale of rising and fall of a criminal career. It’s one of the best films made by Scorsese, with impeccable editing, soundtrack, and amazing performances by the entire cast. Do yourself a favor and watch this movie on HBO Max.

Those are some of Ray Liotta’s best films. What do you think? Have you seen all of these movies? Maybe you haven’t seen one of them. Maybe you forgot that Ray was even in one of these. Moreover, maybe your next movie choice will be here. Whatever the case, we hope you enjoyed our countdown. Thanks for your attention, and see you soon!