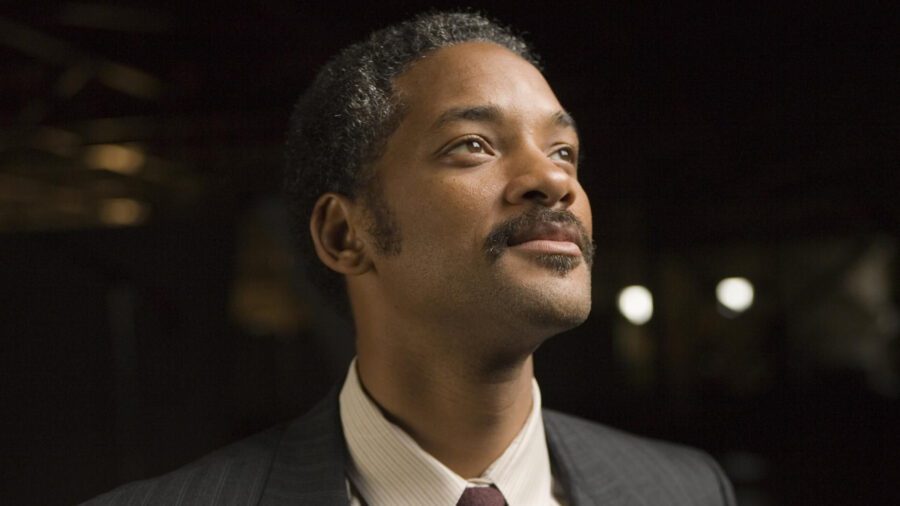 American actor Will Smith needs no introduction. The whole world knows Will as an ace actor who is just as fun off-screen as he is on screen. In his 36 years of service, Smith has brought to us many amazing movies and not to forget many many songs. In a way, all the movies are the best movies of Will Smith but you can’t just sit and watch all of them at once so, here I am to help you!

Will is one of those actors who, if you watch once, you’d wish to watch more and more. And here is the best part, you never get disappointed if it’s Will Smith you’re looking more of. The majority of the population knows Will from the movie series “Men In Black”. However, if you are among this majority, let me tell you MIB is not the best work of Will Smith. There are many more astounding movies of Will Smith you MUST see.

In this article, I have a well-prepared list of movies of Will Smith that I consider his best movies. Some of these were actually Oscar-worthy but well, let’s not go to that part. Additionally, you can find a musical section too. Will Smith has sung marvelous songs which brought him even more fame and proved he’s far more talented than anyone can guess. 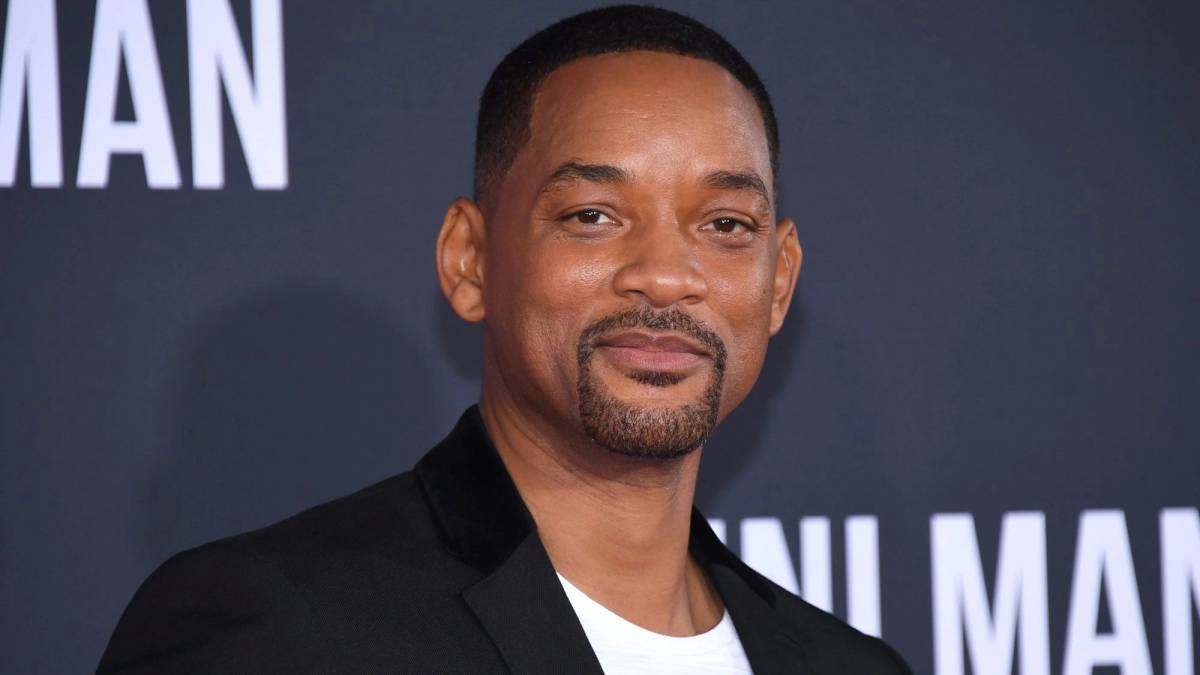 ALSO READ: How Many Oscars Does Will Smith Have?

Best Movies of Will Smith

Some of the best movies of Will Smith are the Men In Black series, Ali, Suicide Squad, and more. Smith debuted in Hollywood in 1992 with the movie “Where The Day Takes You”. The movie made a decent appearance and Smith kept working on his other movies.

Here comes the best movies of Will Smith that you must watch at least once in your life.

“Bad Boys For Life” is an action thriller movie with a pinch of comedy in it (Obviously it’s funny when it has Will Smith). This movie, even though released at the time of the global pandemic outbreak, made a huge amount at the box office and also became the highest-grossing film released in January 2020.

The movie is about a woman, Isabel, who aims to avenge the death of her husband, Benito. She prepares her son, Armando to kill every person responsible for the arrest and eventual death of her husband and his father. Will Smith as Detective ‘Mike’ Lowrey tops the list and so he is shot first. Mike is seen in a coma for a while, during which Armando kills many other entities responsible for his father’s death. It is only at the end of the movie that Armando and Mike have a low-key moment.

Bad Boys For Life is definitely a must-watch movie because of its thrill, suspense, action, and humor. You can watch the movie “Bad Boys For Life” on YouTube for just $1.05.

Still from the movie “Bad Boys For Life”

Bad Boys For Life brought Will Smith many nominations and three wonderful awards. Along with other awards, Will Smith won the People’s Choice Award for the Favorite Male Movie Star for this movie.

“Men In Black” is a sci-fi action comedy movie. This movie has made a unique place in the history of the Global Film Industry by its extraordinary script and plot. Not just the movie earned immensely, it is still considered one of the best sci-fi movies ever made.

The plot of “Men In Black” is set in a situation where very highly dangerous alien subjects assassinate two ambassadors from opposing galaxies. The major twist is that these ambassadors are currently in New York City which is why this weird alien is roaming around casually. Our hero Will Smith is seen as Agent J. He accompanies Agent K in the mission of finding this alien and making sure nobody has a memory of any incident involving aliens.

The further this movie goes, the more interesting it gets. Even on such a serious mission, hilarious scenes occur. Overall the movie is a must-watch if you like Will Smith.

You can watch “Men In Black” on Netflix with a subscription or a 30-days free trial period. 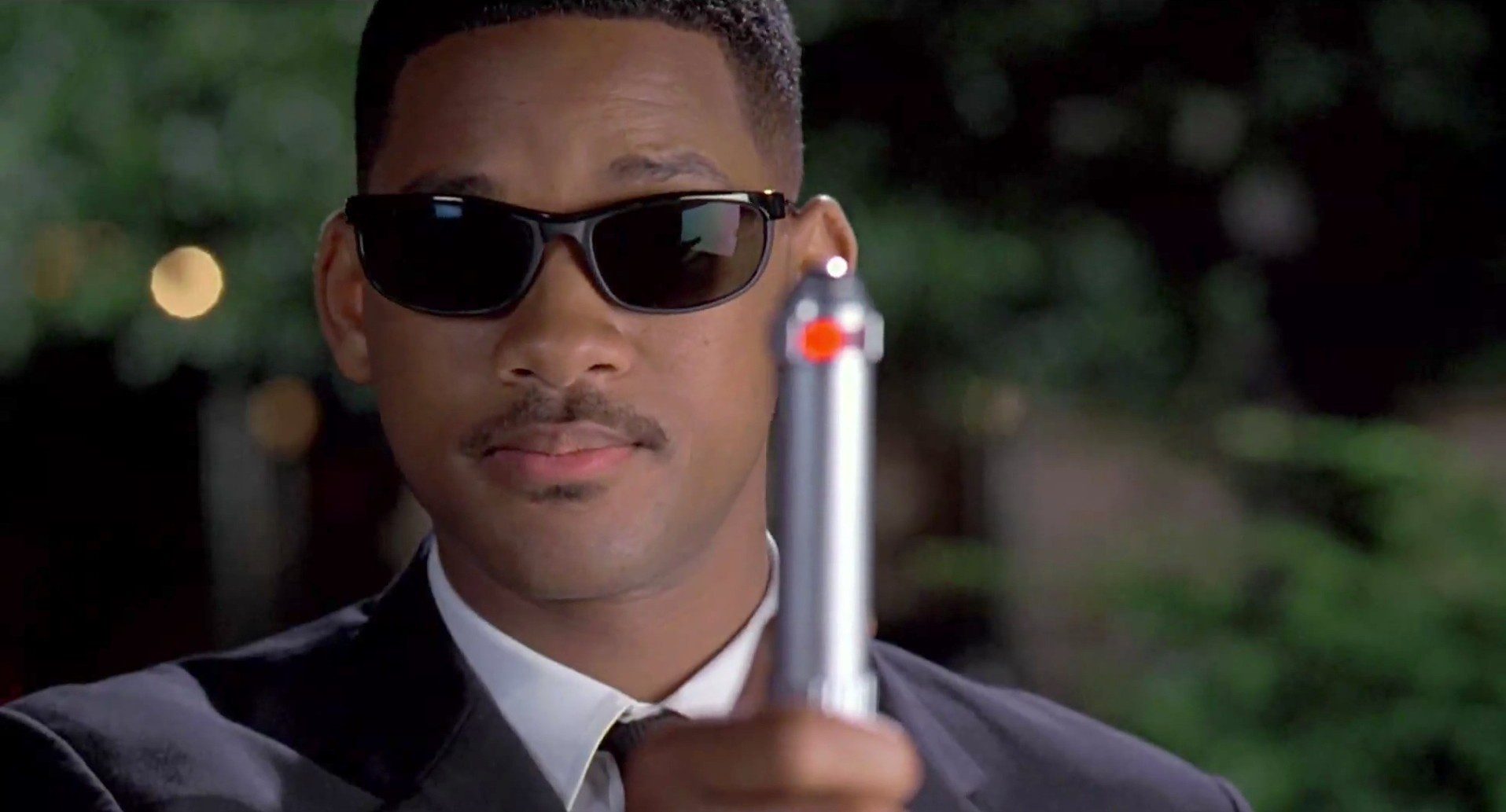 Will Smith as Agent J in MEN IN BLACK

“Men In Black” won Saturn Awards in the category of Best Science Fiction Film. In the same award show, Will Smith was nominated as the best actor but unfortunately, he couldn’t win. He did win, but our hearts!

Ali is a biographical movie about the life of the legendary boxer Muhammad Ali. Although a flop, this movie is one of the best movies of Will Smith. He gave his absolute best performance in this movie and this is why Ali was nominated for various awards.

Basically, the movie only shows the most eventful decade of the life of Muhammad Ali. This decade is 1964-1974. During this period, Ali converted to Islam, got married, got imprisoned, and whatnot. The story was grey for most of the time but the acting was mind-blowing. Will Smith did an excellent job playing Muhammad Ali.

The movie Ali is available to watch on Hulu TV for free. 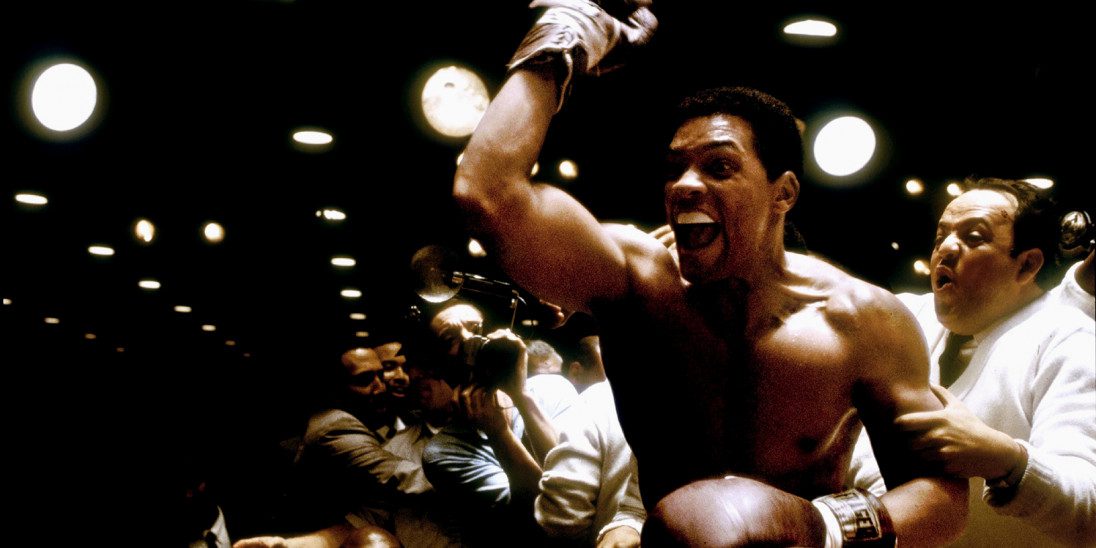 Will Smith as Muhammad Ali in the boxer’s biography, celebrating his victory.

This movie, Ali, became the first step for Will Smith to reach the Academy Award. Even though this movie didn’t bag Smith the Academy Award, he was nominated for the first time ever as the best actor. However, Will Smith won three personal awards. First, he won the Black Reel Awards of 2001 in the Best Actor category for Ali. Next, he won the 2002 MTV Movie Awards in the category of Best Male Performance. And last but definitely not least, Smith bagged the Outstanding Actor Award from NAACP Image Awards for his performance in the movie Ali.

Another biographical movie, The Pursuit was an obvious movie to make its way into the “Best movies of Will Smith” list. This movie was the second and higher step for Smith toward the Academy Award.

The Pursuit of Happyness is the biography of a homeless salesman, Christopher Gardner. Gardner, played by Will Smith, invented portable bone-density scanners to replace X-Rays. The idea was great and success was promised but when? This was the question of which this genius man become homeless, bankrupt, and whatnot. His wife leaves for New York looking for a better job and an eventual better future for their 5 years old son. The story and screenplay are so decent I can watch it ten more times! Everyone must watch this movie at least once in their life.

You can watch “The Pursuit Of Happyness” on Amazon Prime. 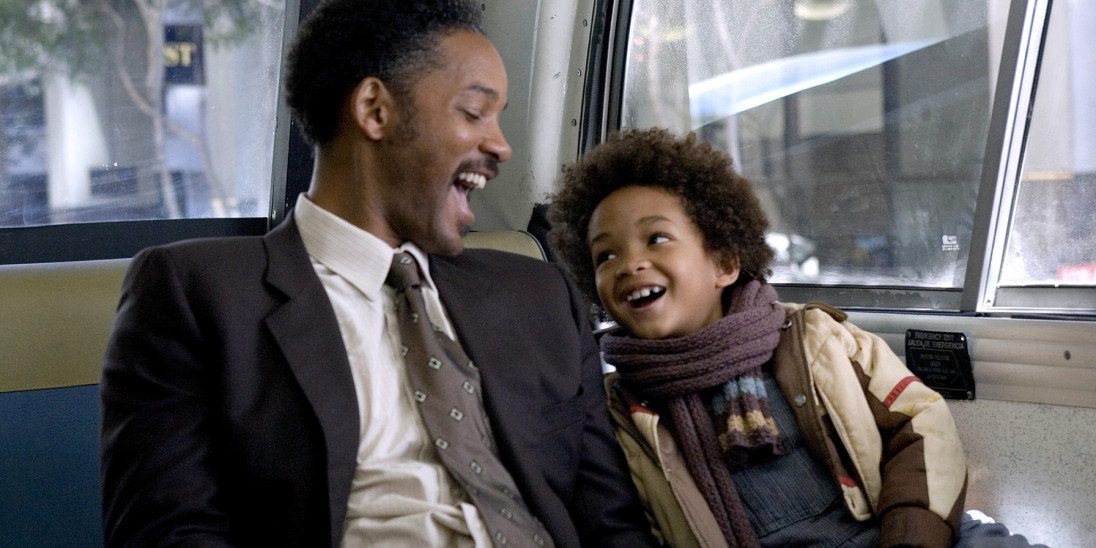 A sweet still from “The Pursuit Of Happyness” presenting Will Smith as Christopher Gardner with his son.

And again a biography, but as you must be aware, this movie bagged Oscar for Will Smith just a day ago. King Richard, played by Will Smith, is so full of father-daughter love, you may end up emotionally attached to the movie.

So for starters, Richard is a retired tennis coach who hopes and tries to make his daughters, Venus and Serena. The movie presents all the strategies, uncertain but agreed by the inner voice decisions and everything else that finally brought the girls to the position where they aimed to be. Venus became the first African-American woman to be ranked number one in the world during the Open Era. Meanwhile, Serena became the greatest player in tennis history.

You can watch the movie “King Richard” on Amazon Prime. 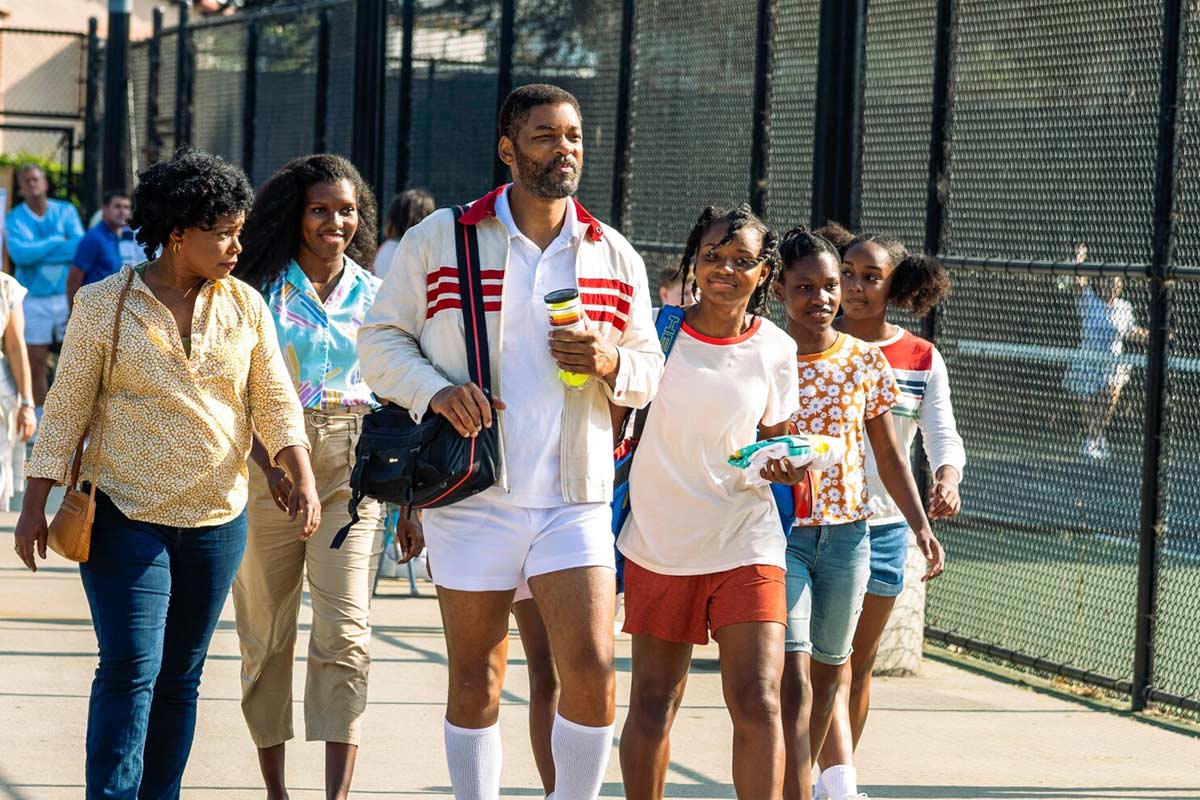 A still from the movie KING RICHARD starring Will Smith

“King Richard” brought many many glories to Will Smith in the form of awards from various award shows. Will Smith won the best actor award at the Oscars 2022.

Here are the other major awards: