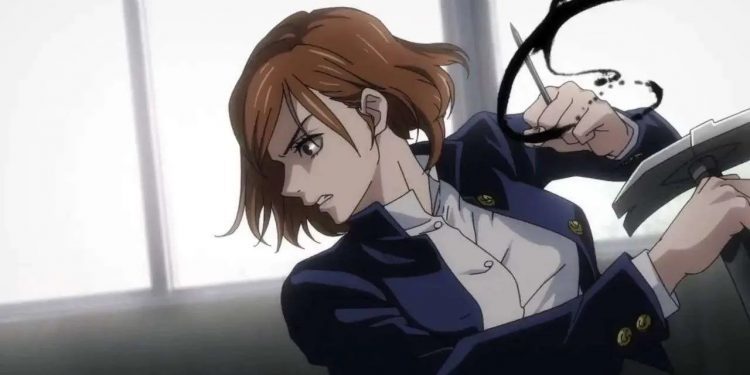 Nobara is regarded as one of the most appealing characters in Jujutsu Kaisen. She is not just intelligent, but her fighting style is also intriguing. We’ve watched her never lose up the spirit, regardless of how harmful the cursed spirit is or how terrible the conflicts become. If you’re a fan of Nobara Kugisaki, then this article is for you. We’ve compiled a list of the most iconic moments of Nobara Kugisaki in which she demonstrated her incredible talent and bravery. She is a first-year student at Jujutsu High and a Grade 3 Jujutsu Sorcerer, where she learns under Satoru Gojo with Yuji and Megumi. Nobara has mid-length orange hair with bangs and is a short and slender female. Her eyes are orange.

Nobara is a bold and self-assured young woman with a strong personality. Above all, Nobara is adamant about staying loyal to herself no matter what. She takes great satisfaction in being both a beautiful girl and a fierce warrior, refusing to be swayed by anybody. Nobara has always been vocal and different from the rest of her little village since she was a child. Jujutsu High rates Nobara as a grade 3 jujutsu sorcerer. This is mostly owing to her inexperience as a sorceress and her rank as a first-year student. Nobara has demonstrated her capacity to compete with jujutsu sorcerers who are worlds above her in terms of grade on multiple occasions. Nobara had a firm grasp on how to expel curses with her natural technique when she arrived at school. She possessed the mental toughness to do the work, but she lacked physical strength. Nobara successfully defended herself at the Eishu Detention Center until she was left with no nails to fight with.

Also read: Is Nobara Kugisaki Dead in Jujutsu Kaisen? The Biggest Cliffhanger In The Manga

Here, are the most Iconic Moments of Nobara Kugisaki:

Responsibilities and Self Acceptance

Nobara has been spotted looking elegant and well-dressed, but she is the type of girl who will never please anyone, which is one of the few qualities that makes her appealing. During the Kyoto Goodwill Event Arc, Nobara had the opportunity to put pen to paper her views on women’s beauty standards. Momo Nishimiya, a third-year sorcerer, stirred Nobara up during combat by bemoaning the high expectations placed on female sorcerers. “What motivates us to aim for such impossibly high standards?” Nobara remarked. She wasn’t about to take a snub about looking unkempt, and she wasn’t about to let a third-year preach.

“I don’t give a damn about men this and ‘women’ that,” Norobara cried, her nails flying and her straw doll technique activated. You have complete freedom to say whatever you want! When I’m all dressed up, I adore myself! And I enjoy it when I’m in charge!” One of the most famous lines from Jujutsu Kaisen Season 1 is this victorious phrase.

Nobara Showed Off Her Abilities In Super Smash Bros

In Jujutsu Kaisen, Nobara’s sorcery talents aren’t the only outstanding abilities she has. She can also play Super Smash Bros. with the best of them. “What do you do at this event?” When asked about the Kyoto Goodwill Event, Nobara inquires. “How about Super Smash Bros?” says the player. The idea appealed to her since it would allow her to improve her video gaming abilities. “If it’s the Wii version,” she says, “I won’t lose.” She appears to be skilled at a variety of games, not only Smash Bros. In a game of Rock, Paper, Scissors, Nobara was pitted against Itadori. To frighten him, she said, “I’m going with paper,” then went on to say, “I’m going with rock,” in response to his move, which he gullibly chose to be scissors. That young lady is far too intelligent for her own betterment.

Nobara, Itadori, and Megumi sought down the cursed spirits and battled the formidable brothers Eso and Kechizu in the last episodes of Jujutsu Kaisen Season 1. During this battle, the brothers utilized their Rot Technique Decay on Itadori and Nobara, which causes a decomposition poison to steadily eat away at foes until they’re nothing. Nobara bursts out laughing and performs Straw Doll Technique: Resonance on herself to injure Eso and Kechizu before asking them to a game of chicken. She asks the spirits whether it hurts and informs the afflicted spirits that if the suffering is too great for them, they should release their technique. Eso mulls over how Nobara’s ability reverses the curse on the user and considers whether or not he should discharge his technique.

Nobara is relieved when Kechizu responds to her Resonance method. They won’t die no matter how many times Nobara performs Resonance on them, and they won’t be able to move because his Decay method is still active. Yuji, on the other hand, is unharmed since he is the vessel of Sukuna, the King of Curses, who possesses poison resistance, much to the amazement of Eso, who is helpless as Yuji slams Kechizu with cursed energy-infused fists.

Also Read: 7 Nanami Kento Facts From Jujutsu Kaisen That You Might Not Know

Pushing Yuji On The First Mission

Nobara might come out as a haughty and arrogant individual. She began by showing her disdain towards Yuji and Megumi. For the majority of their first assignment together, she also fought with Yuji. Despite her gruff demeanor, Nobara is a really kind and responsible individual who would never allow most people to see that side of her. Yuji and Megumi become Nobara’s closest comrades after battling alongside each other on countless missions. Nobara tackled the issue with confidence and proposed they divide up to handle it fast on her first assignment to workout some cursed spirits with Itadori.

While Nobara is a good person in many respects, she isn’t always the nicest person on the block. Part of her grit makes her strong, and her tough-guy demeanor could have been just what Itadori needed to prepare for the perilous difficulties of being a Jujutsu sorcerer. If Nobara’s words weren’t enough to compel Itadori, she showed off her advanced skills in front of him, piercing a cursed spirit’s arm with her nail to trigger her Straw Doll technique and demolish the opponent.

Third and Final student of the trio

The third and final student in Gojo’s first-year class is introduced. Nobara, the fiery Girl of Steel, is initially unimpressed by her peers until she is assigned a task that requires her to collaborate with Yuji in order to exorcise a number of curses. Nobara reflects on her past when confronted with the life of another. Nobara is the only female among Jujutsu High’s three first-year students. Nobara Kugisaki introduces herself after depositing her belongings in the coin locker. She goes on to say that the boys are fortunate to have her as their leader. Nobara is not amazed by either Yuji or Megumi when they introduce themselves. Her self-awareness of her role in the group is impressive, and she quickly establishes herself as a strong, independent woman who must deal with these obnoxious classmates.

During the Shibuya Incident, Nobara misjudged curse user Shigemo and was often caught off guard by his incredible skills. Shigemo was hitting Nobara with precise accuracy, making it impossible for her to maintain her balance, much less protect herself. Nobara devised a scheme to induce Shigemo to talk so she could buy some time. As a consequence of this, Nanami was able to beat the curse user and rescue her. Because she had little to show for the encounter, Nobara persisted in fighting rather than fleeing as commanded. Unlike Shigemo, she was up against Mahito, an opponent she was well-versed in. Nobara concentrated on trying to get access to the heart of cursed energy in order to fight someone of his caliber, a sensation he remembered from when he first obtained Black Flash. Nobara devised an approach that was both practical and successful.

Also Read: Who Is The Traitor In Jujutsu Kaisen? When Was The Mystery Person Revealed?