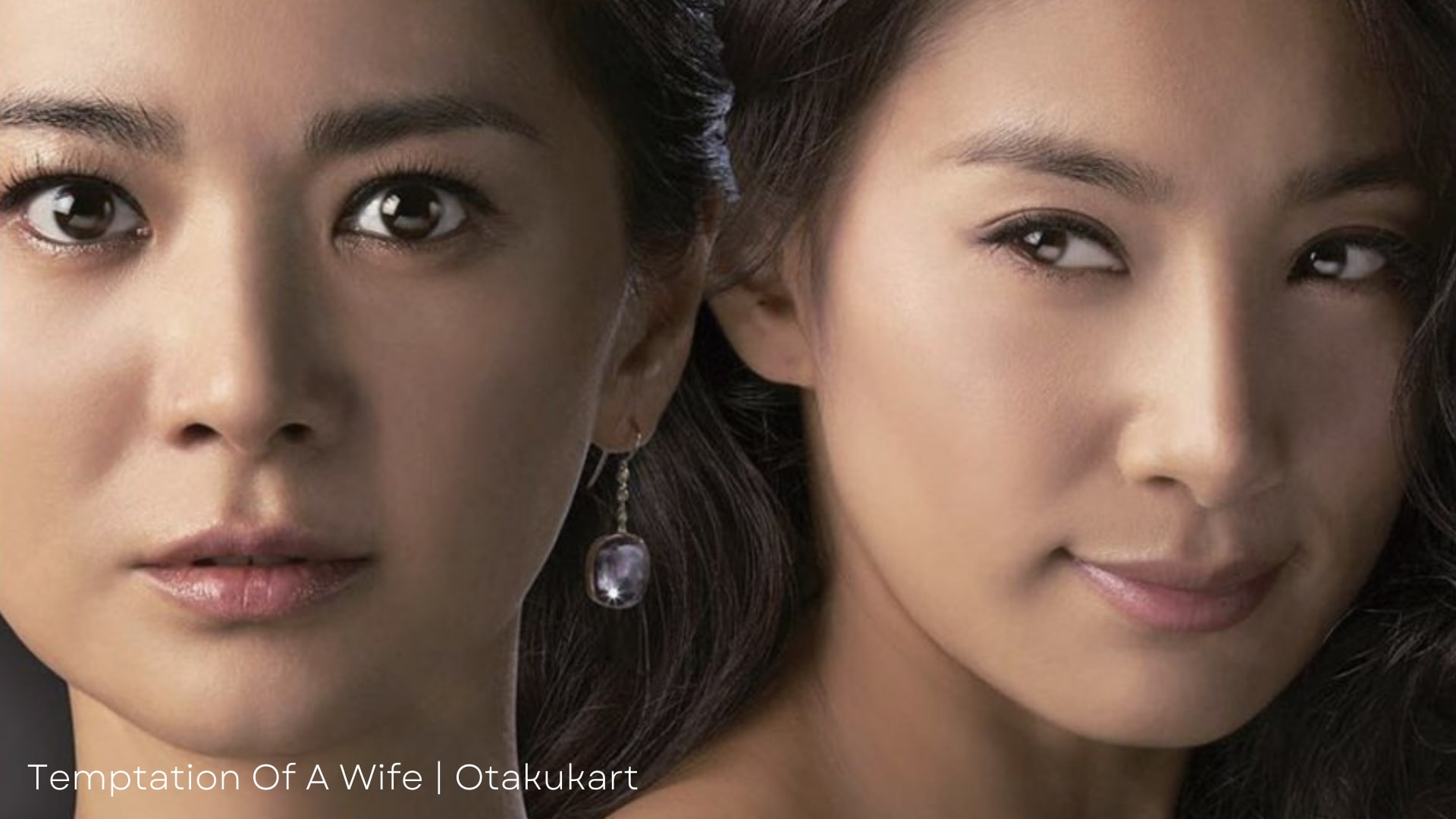 Temptation of a wife Korean Drama

Temptation of a Wife is one of the famous revenge dramas with high viewership and a crazy storyline. And if you are wondering whether to watch it or not. Don’t worry because we have brought you the answers. The kdrama Temptation of a Wife is a makjang (daily drama) revolving around the lives of four people. It will make you question the sanity of the evil characters. Yet you would not stop watching it because it keeps you on edge from the start till the end. The biggest credit goes to the cast members, especially Jang Seo Hee, Kim Seo Hyung, who were able to pull out various reactions from the viewers! It makes you eager, thrilled, angered yet brings joy, making the drama more enjoyable!

Even with various controversies attached to the plotline, Temptation of a Wife becomes one of the most-watched kdramas. It even earned numerous awards due to the excellent performance of the cast and thrilling overdramatic story! The drama is written by Kim Soon Ok and directed by Oh Se Kang, starring Jang Seo Hee, Byun Woo Min, Kim Seo Hyung, and Lee Jae Hwang. Even though it has been more than a decade since the kdrama aired, Temptation of a Wife is still enjoyable because of its cliche yet well-executed storyline. It is the revenge tale of an obedient wife reborn as a temptress to avenge her enemies!

Plot Summary- A Dutiful Wife Reborn As a Temptress

The South Korean drama Temptation of a Wife is your regular cliche revenge drama. In such a story, a female lead transforms into a completely fearless character to revenge the cheated male lead. It revolves around four people. After Ae Ri’s parents died in a car accident, Gu Eun Jae’s parents adopted Shin Ae Ri. Since then, they have been living together. However, one fateful event changes their lives forever. Shin Ae Ri goes to France to complete her study while Gu Eun Jae becomes pregnant with Jeong Gyo Bin’s baby and decides to marry him, canceling her study plan.

Eun Jae’s seven years of marriage collapses after learning her husband’s affair with her own sister-like friend, Ae Ri. However, it is not an end to their wickedness! Later finding Eun Jae’s second pregnancy, the evil couple crosses the line, ignoring the pleas for help, leaving Eun Jae to drown and die. To cover up their crime Gyo Bin and Ae Ri even fake a suicide note, clearing their hands from Eun Jae’s death. However, like every evil comes to an end someday, their time also comes. Because now a new Eun Jae is born who will not let anyone take her place and avenge those who did wrong to her. How will this new Eun Jae execute her master plan to avenge the sinners for her death and misery? Will she succeed or once again falls into the trap of this vicious pair?

Temptation Of A Wife Cast

Jang Seo Hee as Gu Eun Jae/Min So Hee- Gu Eun Jae always dreams of becoming a make-up artist but gives up after marrying Jeong Gyo Bin. She places her marriage life above everything, only to be crushed under her husband’s cheating affair. After becoming a victim of her husband’s cruelty and losing her baby, she turns into a new leaf. Eun ae returns with a new identity, Min So Hee, to take her revenge.

Byun Woo Min as Jeong Gyo Bin- Jeong Gyo Bin is an heir to a chaebol company, who cheats on her wife with his sister like friend Ae Ri. However, like a chameleon, he changes sides after Eun Joo returns with a new identity.

Lee Jae Hwang as Min Geon Woo- Min Geon Woo is the only person who tries to stay by Eun Jae’s side till the end. A sweet, caring soul who saves Gu Eun Jae. Geon Woo supports her like a strong pillar through her revenge plan.

Kim Seo Hyung as Shin Ae Ri/Michelle Shin- Shin Ae Ri is like a sister to Eun Joo and grows up with her. However, always harbors jealousy, hatred towards Eun Jae. To defeat her, Shin Ae Ri even traps Gyo Bin in her web of temptation, making him go against Eun Jae. A cruel, wicked character who is willing to do anything to get what she wants.

Review Of Temptation Of A Wife Kdrama- Watch It Or Skip It?

Temptation of a Wife Korean drama has kind of mixed reviews. It depends on what you are looking for. If you are looking for a great storyline with realistic and less dramatic effects, the series is not for you. However, if you want to watch some crazy bad woman going after a sweet innocent female lead, who eventually became a badass lady with a strong backbone, this kdrama is made for you! Temptation of a Wife is your choice if you are looking for revenge, overdramatic plotline. Apart from this, the casting is another charm of the drama. All characters performed flawlessly, be it main leads or supporting roles, becoming one with their characters. Each emotion they deliver will wave your feelings. Even though it has 129 episodes, you will not get bored because each and every scene of it will make you crave more while keeping you on edge all the time! So if you love revenge dramas, you should go for it because Temptation of a Wife is your cup of tea to enjoy!

Is It Possible To Have Season 2?

Unfortunately, there has been no news out about Temptation of a Wife season 2. However, the kdrama is a part of the ‘Wife Trilogy,’ which covers ‘Two Wives’ and ‘Wife Returns.’ Both dramas are similar to Temptation of a Wife but not exactly interlined. Since the drama concluded with a sweet-bitter ending, closing off all loose ties, there are fewer chances to make Season 2. Plus, already ten years have passed since it aired. Even though kdrama writers take years to make a sequel, they never take a decade length gap. So the continuation of this storyline will not be possible in the current frame. However, you can watch the other two parts of the ‘Wife Trilogy’– ‘Two Wives’ and ‘Wife Returns.’

Besides the trilogy, the drama has two local adaptations from China and the Philippines. Furthermore, there is a male version with the tiled ‘Temptation of an Angel.’ The Filipino remake is called ‘Temptation of Wife,’ while the Chinese remake is The ‘Temptation of Go Home.’ You can check out any of these series if you love the Korean version. After all, all installments have one similar concept, revengeful wife!

The kdrama Temptation of a Wife was released in November 2008 on the SBS channel and ended in May 2009 with a total of 129 episodes. 129 episodes sound too much, don’t they? Well, probable yes but, each episode runs for only 35 minutes. Therefore, you will be able to complete it before you can figure it out. Not to mention, it’s an exciting, thrilling revenge dramatic plotline that will keep you on toes the whole time! If you are wondering if the drama is completed, where to watch it? Well, don’t worry because Temptation of a Wife is available on Wavve, an online streaming channel available only in South Korea.

Similarly, for international fans, the drama is available on the official YouTube channel of SBS named SBS TV Emotional Channel with English Subtitles. So even after its completion, you can still watch from the comfort of your home. Craving some dramatic revengeful story, go for Temptation of a Wife!

When Does Luffy Use Gear 3? How it Works and What It Does to Him?