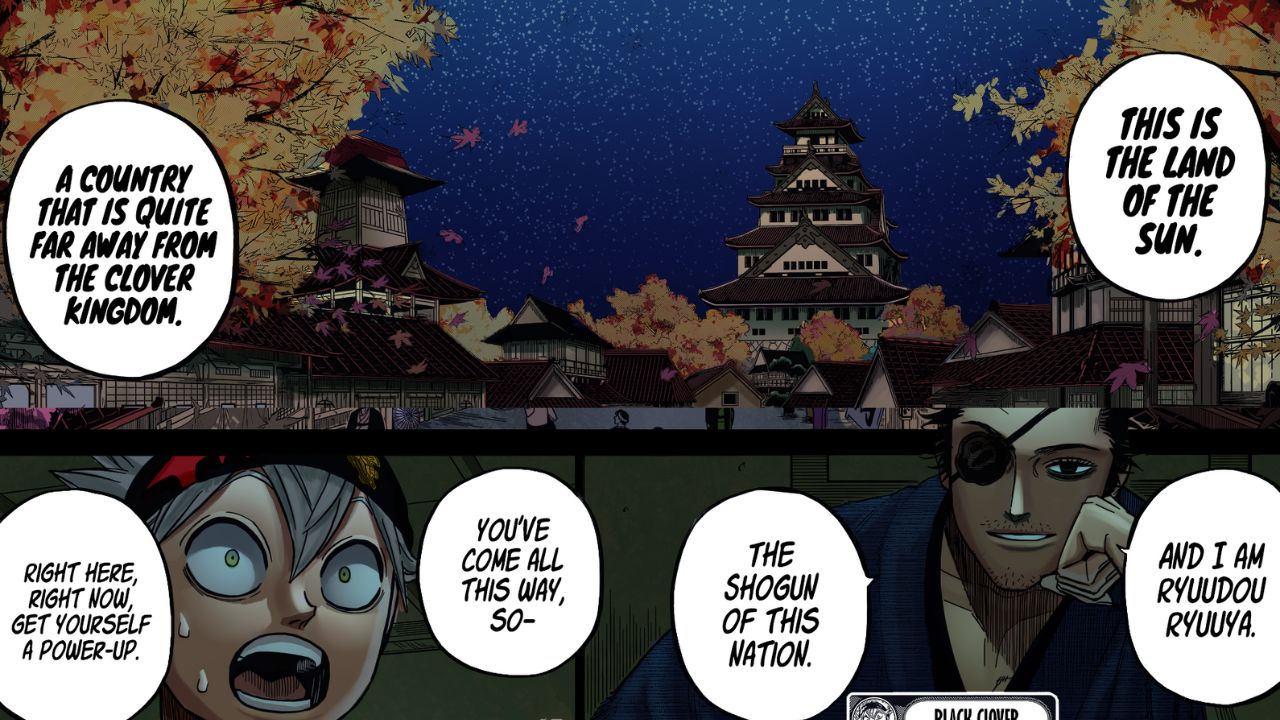 Black Clover Chapter 338 is scheduled to release in shonen jump’s 42nd issue with a new chapter of One Piece and My Hero Academia, alongside a feature of One Piece on the magazine’s cover page. Fans saw this coming from miles away. We were expecting where Yami actually come and Black Clover Chapter 337 did reveal a little hinting that the Land of the Sun, basically indicating Japan and its old culture in the series.

It’s a tradition that most of the mangaka follow since all of them are Japanese and symbolizing their culture through art and their fiction story is not something we recently saw in One Piece’s latest arc Wano, the land of the Samurai that came to an end. Many fans are even saying that it’s Wano all over again in a different story. Well, after seeing Asta in this new land that is crying out loud about the Samurais and new story we are excited to Asta in a new development.

The chapter begins with Nacth telling the members of the Black Bull about the Incident and that Asta might be dead. They don’t believe hearing this and alongside the Vice Captain, they plan to find Asta or his corpse if he is dead. Meanwhile, Asta wakes up in a strange and meets a Samurai named Ryuya Ryudo who tells him that Yami grew up here and they know each other.

Seen a lot of discourse on this moment in Chapter 337. And I don't agree that's it's bad or inconsistent.#BlackClover #ブラッククローバー pic.twitter.com/dqoQMeT9XN

When realizes that he should go back to the Clover Kingdom, Ryuya tells him that he is very far away from home in the land of the Sun and he is the Shogun of this country and while Asta is here, he must get a power upgrade to face Lucius.

Only seven days remain until Lucius alongside his army of Paladins (new humans with the power of the devils) starts their attack on the humans that remains on the planet. Lucius’ goal is to replace this human with Paladins and become the Wizard Emperor. Up until now, we haven’t been told the reason for Lucius taking a seven-day gap until he attacks. Let’s hope Black Clover Chapter 338 might highlight the matter a little.

Whereas for the main part, Asta is in the land of the Sun, a country where Yami came from and he has met the ruler of the country (Shogun) named Ryuya Ryudo. He told Asta that he cannot leave this alone and even if he did, he would again lose. So while he is here, why not get a power upgrade? said Ryuya.

We are expecting to see Asta learning the ways of the Samurai and since Ryuya knows about the devils too, he might teach him an upgrade regarding his devil as well. Whereas, Ryuya is himself very mysterious and he has the power to see it all and we can hope the author elaborates on that matter as well. Furthermore, the members of the Black Bull are on their way to find Asta, and could they stumble upon this land as well and get a power upgrade for themselves? It’s too early to say anything.

Although Black Clover won’t be on a break next week it will come a day later than usual due to unknown reasons. Black Clover Chapter 338 is scheduled to release on Monday 19th September 2022 in weekly shonen jump’s 42nd issue. Read the New chapter of Black Clover releasing every Sunday unless a break is announced.

Where to Read Black Clover Chapter 338?

Once released, Black Clover Chapter 338 will be free to read on various platforms like viz media, manga plus, and Shonen Jump’s official application. You can read the first three and the latest chapter for free on the aforementioned websites. However, you will have to the subscription fee to read the entire catalog on the websites and the app which is available both on Google Play and the App store.