The Brazen bull in action

Ancient Greece is a place of great architecture and philosophy. Before the arrival of the Romans, Greece flourished in almost all sectors, from seafaring to amphitheaters. Even after the Roman conquest, the Romans adopted many Greek ways, with many philosophers quoting that the Greeks greatly shadowed the Roman contribution to literature and culture.

However, that is not to say that ancient Greece was a paradise on earth. From poisonings to stoning to beheadings, there were many creative ways in which the Greeks managed to keep the vast empire under control and the population in check. And one of the most terrifying things would be the usage of the Brazen Bull, a bronze bull that was used for baking the traitors and conspirators alive.

What was the Brazen Bull?

At around 560 B.C., in the seaside colony of Akragas (modern-day Sicily), a cruel tyrant named Phalaris ruled over the region with an iron fist. Though the colony was wealthy and civilized, Phalaris was a paranoid man who wasn’t known for his sense of justice. He saw usurpers and tyrants at every corner. 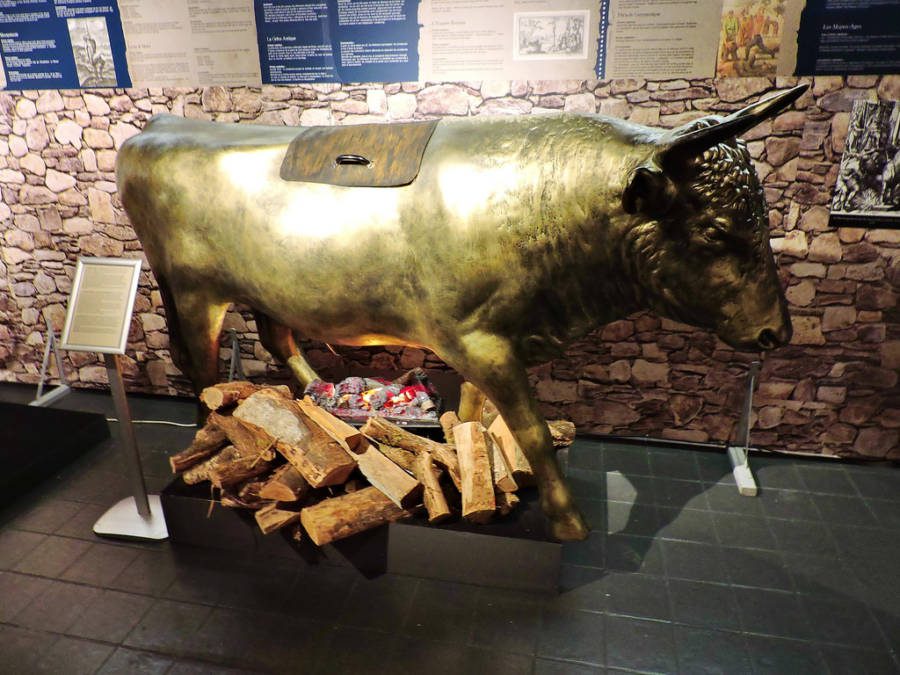 One of the surviving brazen bulls

After getting bored by the usual court proceedings and the lackluster torture methods and executions, Phalaris ordered the court sculptor, Perilous, to invent something new. And invent, Perilous did. Perilous created the replica of a huge bull in brass. At first glance, the bull was another harmless addition to the treasury or the court. However, a closer examination revealed that the statue was affixed with all the right bells and whistles (literally) that could be successfully used for torturing a poor soul mercilessly.

The Brazen Bull worked in a manner that would make Satan himself shiver. Once a victim was chosen for a torturous execution, the man would be tied and tossed into the body of the hollow bull. Then, while the victim begged for mercy, a fire would be lit beneath the brass bull and gently stoked up into a furnace. The bull would get boiled inside, and the victim would be roasted alive.

The screams of the victim would be muffled, and due to the elaborate pipes inside the bull, the screams would come out as the snorts of an angry bull. Perilous explained that once the victim was properly cooked for hours, the hatch could be opened after the bull cooled down, and the victim’s bones would shine like jewels that can be made into bracelets. 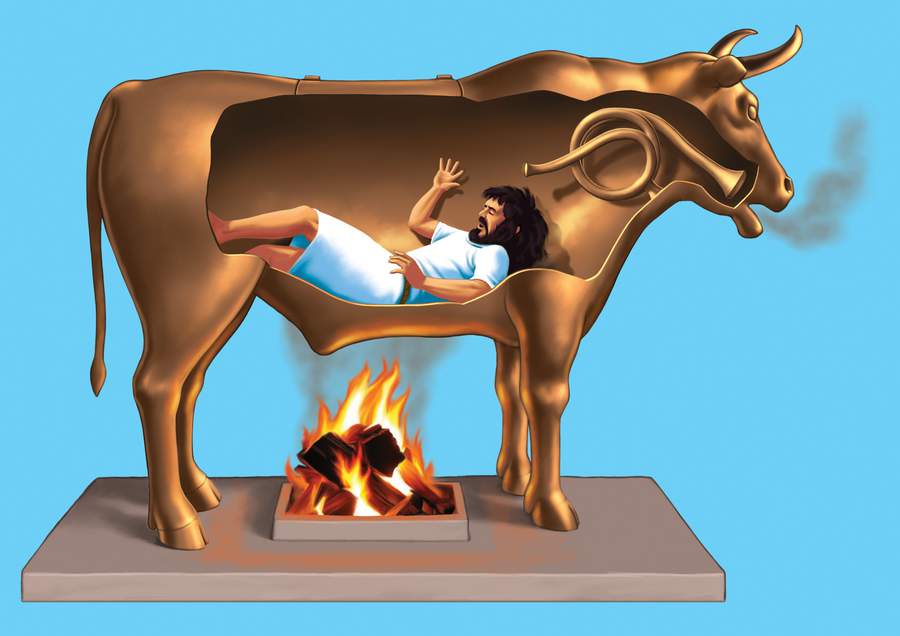 A representation of the use of brazen bull

Perilous thought the bull would amuse Phalaris, and he would be rewarded. He was right; to a great extent, Phalaris was amused. But he was a bit too over-enthusiastic and asked Perilaus to demonstrate. When Perilaus climbed into the bull to elaborate all the wicked features of the bull, Phalaris shut him inside, trapping the inventor. He asked the men to add fire beneath the bull while Perilaus screamed from the inside, roasting the inventor alive.

Further Usage of the Bull

The Brazen bull, once conceived, became infamous across Greece. After the Roman invasion, the Romans used the bull extensively. The bull usage was recorded in early AD 118 when Saint Eustice was baked alive along with his family for not renouncing Christianity and for not worshipping the Roman pagan gods.

In the same manner, Saint Antipas, Bishop of Pergamon, was roasted to death in A.D. 92 under the orders of Emperor Domitian, who prosecuted Christians during his reign. Antipas became the first Martyr of Asia Minor. Even two centuries later, the bull was still in use when Pelagia of Tarsus was roasted under the orders of emperor Diocletian, another tyrant. He hated Christians and hunted them down mercilessly.