Being popular can be harsh, but to understand that it comes with a cost and your children need a special kind of attention is even rarer. Such a display was recently shown by Victoria Beckham. The former spice girl member is concerned about her daughter’s exposure to social media. Social media is a critical place where things can go out of control and scar a person for a long time. To protect her from such scrutiny, the Beckham couple has grounded their ten-year-old daughter from going to social media. They are gonna have to open the flood gates at one point but they are careful not to let it happen anytime soon. But seeing Posh Spice made it into the news recently, we started to wonder when was the last time the fashion designer had an iconic dress displayed in the public? One thing led to another and we came presently these top  10 outfits of Victoria Beckham.

Starting with pink pajamas on the list. Posh Spice proves that there is no such thing as inadequate when it comes to her fashion sense. She is wearing pink pajamas from top to bottom and making a fashion statement by just passing. But if you are gonna copy that, read her book for some pointers. 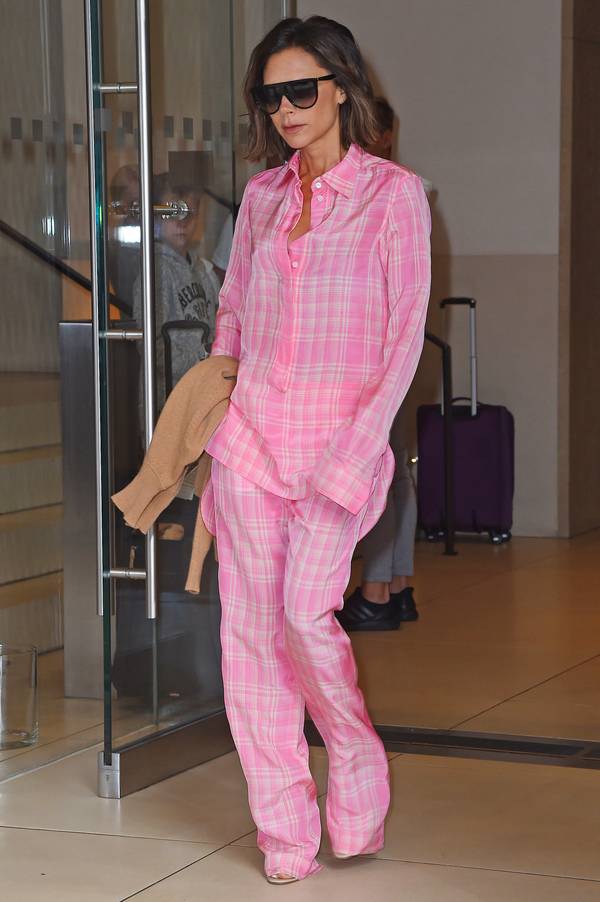 A trip to another country in simple clothes, or is it? Victoria is wearing the shades with her bag in a way that eludes simplicity that is a fashion unrivaled. How much time did she take to come up with that? Maybe none, she is a genius when it comes to fashion so she doesn’t need to spend too much time. 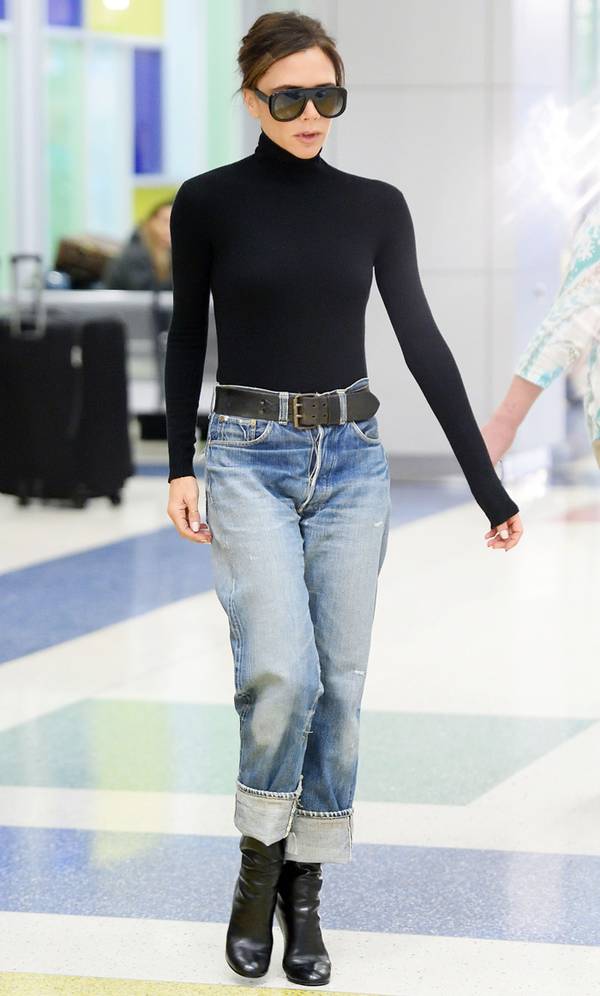 8) Class, and modern. Blend of bold and subtle

Another deceivingly simple outlook of Victoria Beckham. Perhaps that is where her fort lies, wear simple that doesn’t stand out but her innate fashion sense doesn’t know how to hold back. This combination of light and dark is gorgeous in its purest sense. And pure as well, does she talk about it in the book? 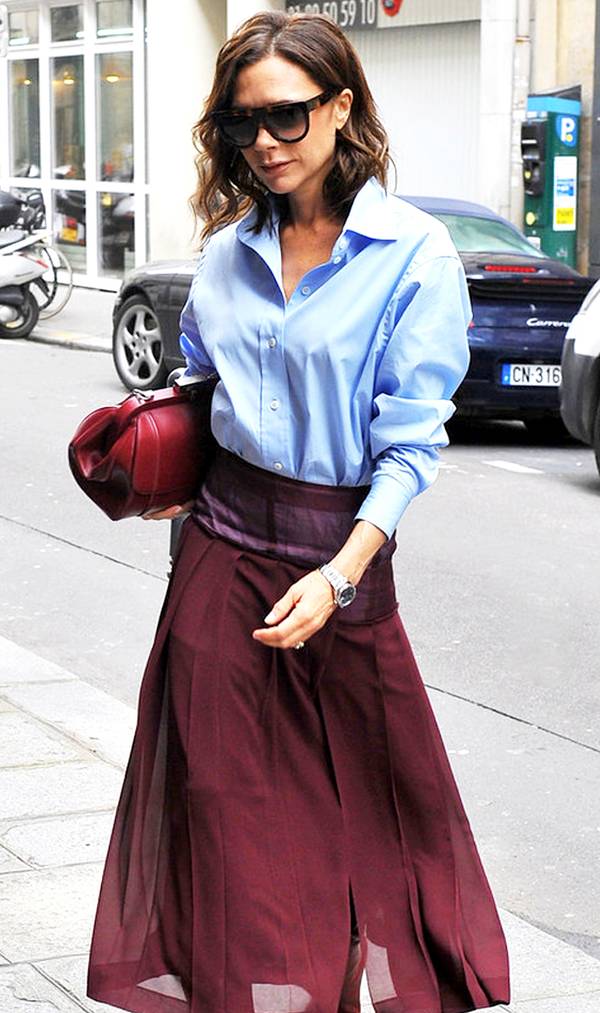 CC: Class, and modern. Blend of bold and subtle

It’s an odd sight to give a masculine touch to female clothing, it’s a smart statement to give a feminine touch to male clothing. This is exactly what Beckham has done and once again shows why outfits of Victoria Beckham are looked up even today. 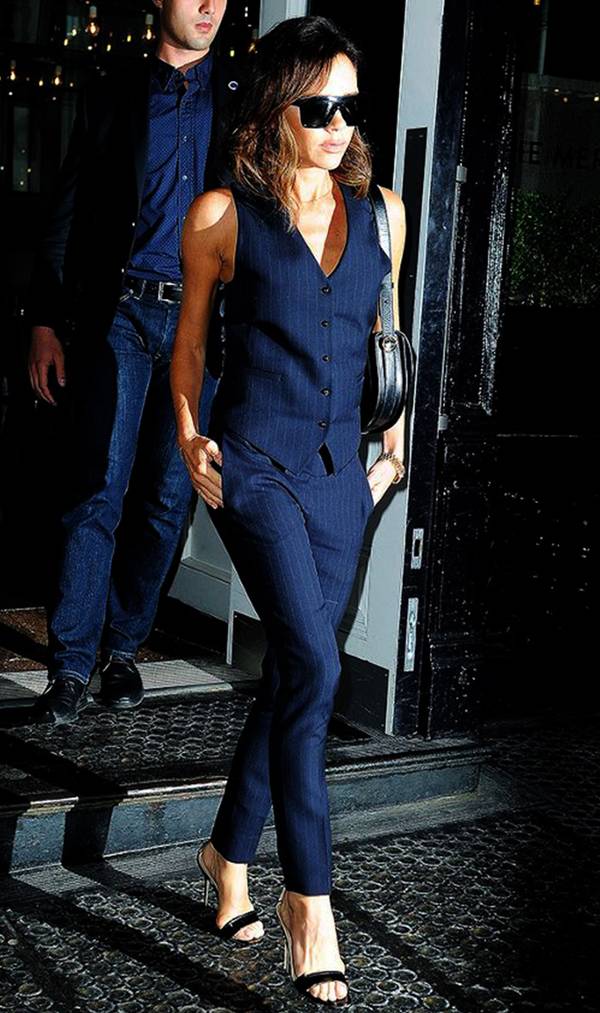 Who can rock this combination? Not many, we dare say even among celebs, there is someone who could show this level of delicacy. From head to toe, it would look like someone is trying to hide. But Victoria stands out instead. 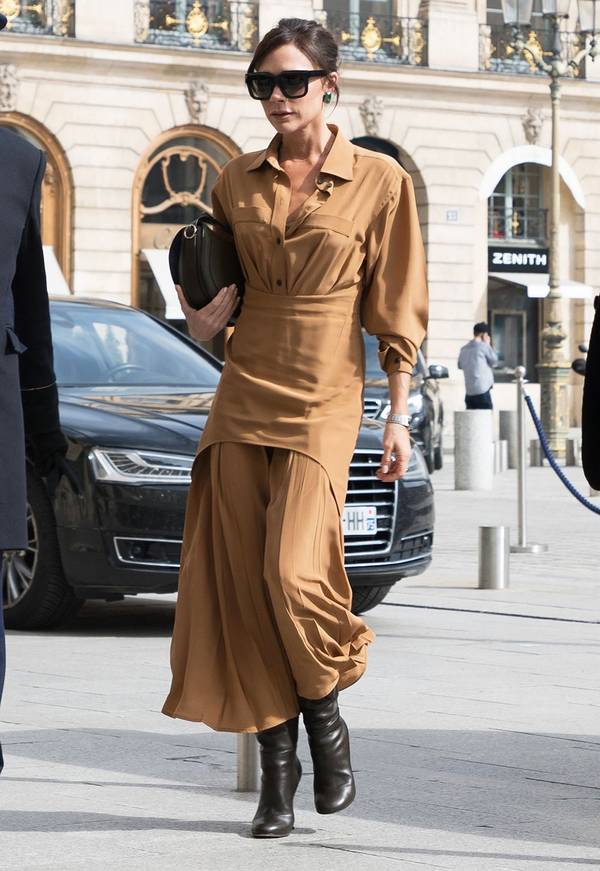 Too bright clothes, and on what day? It would be a different story if it were a particularly hot day but that wouldn’t faze Beckham and she would still pull off something similar in that fashion. Though, please do not emulate on a really hot day… 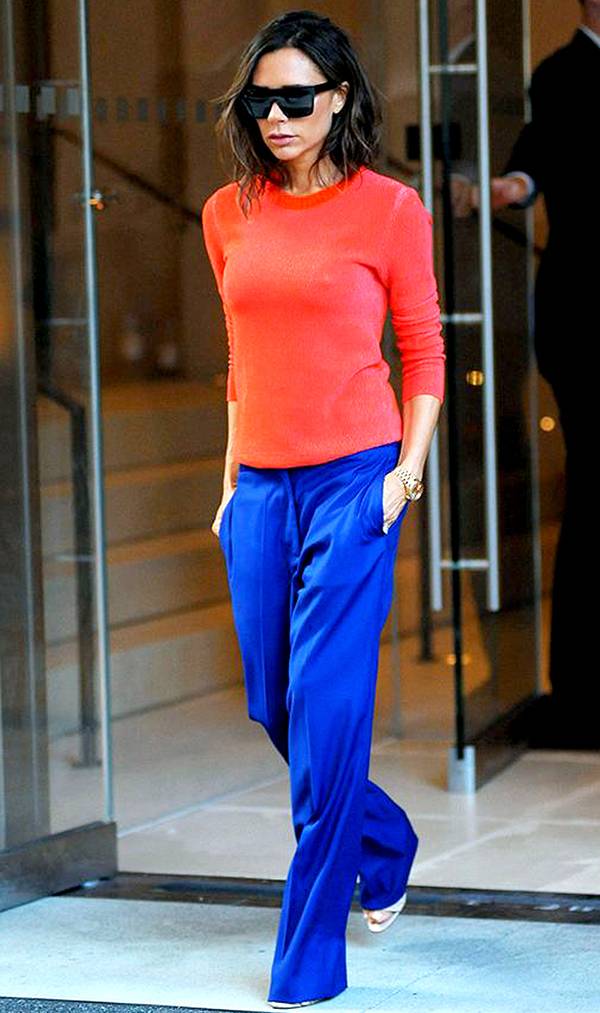 CC: No Such Thing As Too Bright

White clothing from that is good for any day, but with Bechkan there are no do-overs and we may not get to see her in public again. It is most likely daily wear. We wonder how David can tell if outfits of Victoria Beckham for events and normal days apart. 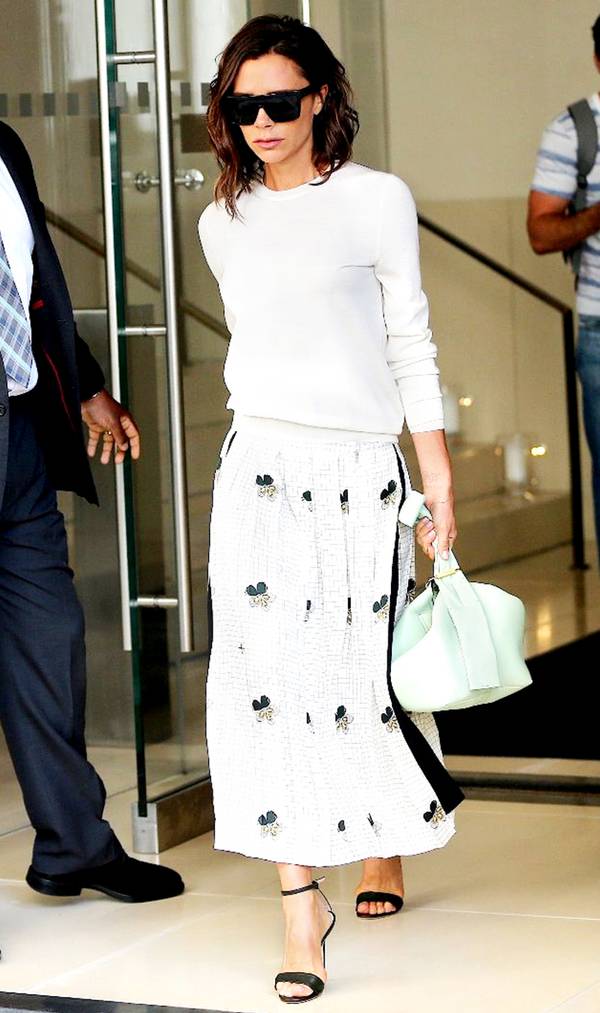 Going into Paris, the city of style. So what if it rained? The weather was in contrast to this dress and made its appeal wider than it has any need to. Though, we hope Posh Spice didn’t get caught up in rain and get sick afterward… 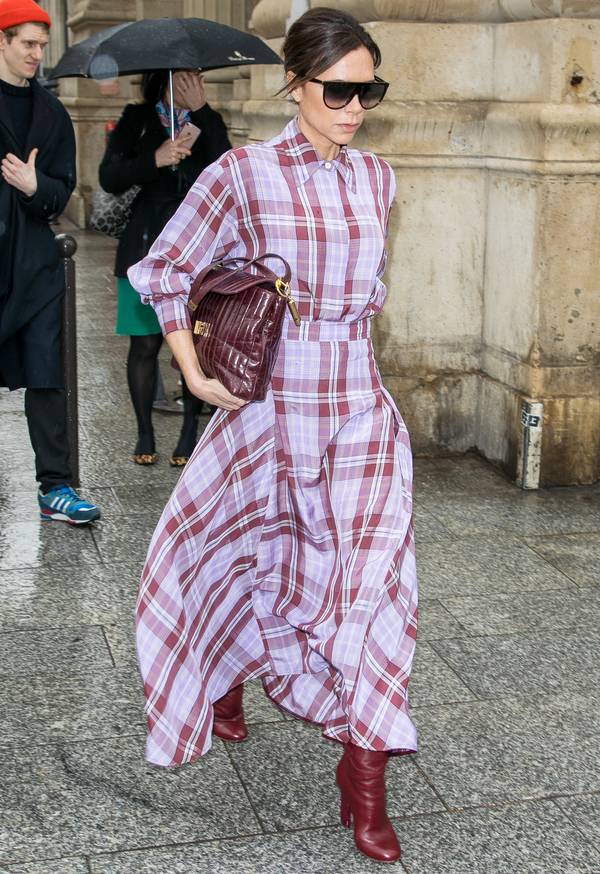 CC: Rain But Who Cares?

The small details are what the ex-spice girl is the champion of. Were it not for that her fashion sense would be something else. Though, it is that very notice to detail that elevates her to heights of Fashion design and makes her possession valuable 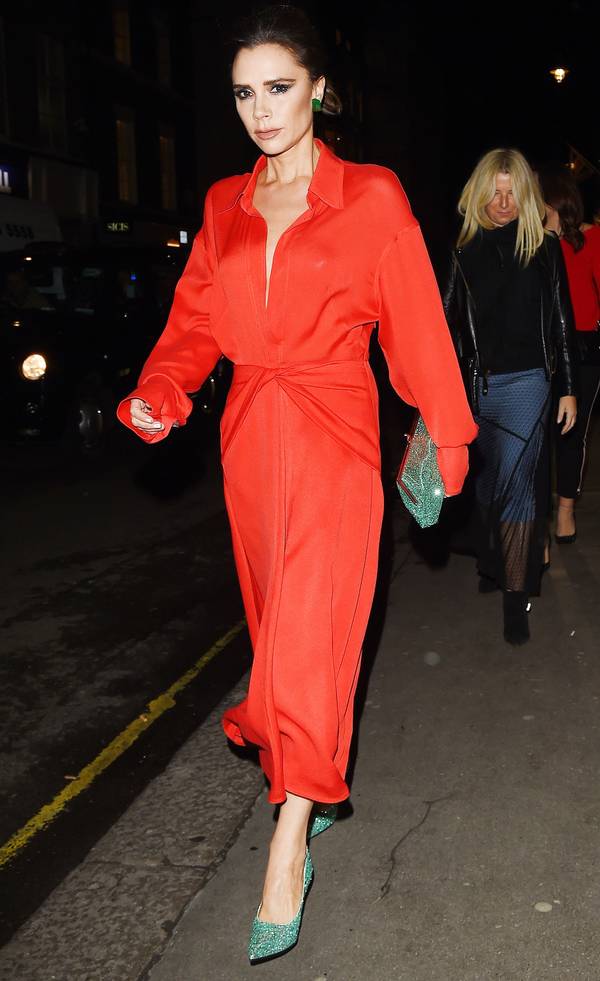 The skirt was so bright Victoria had to wear shades to save her from strain. Though, to the observers, it was a nice touch. 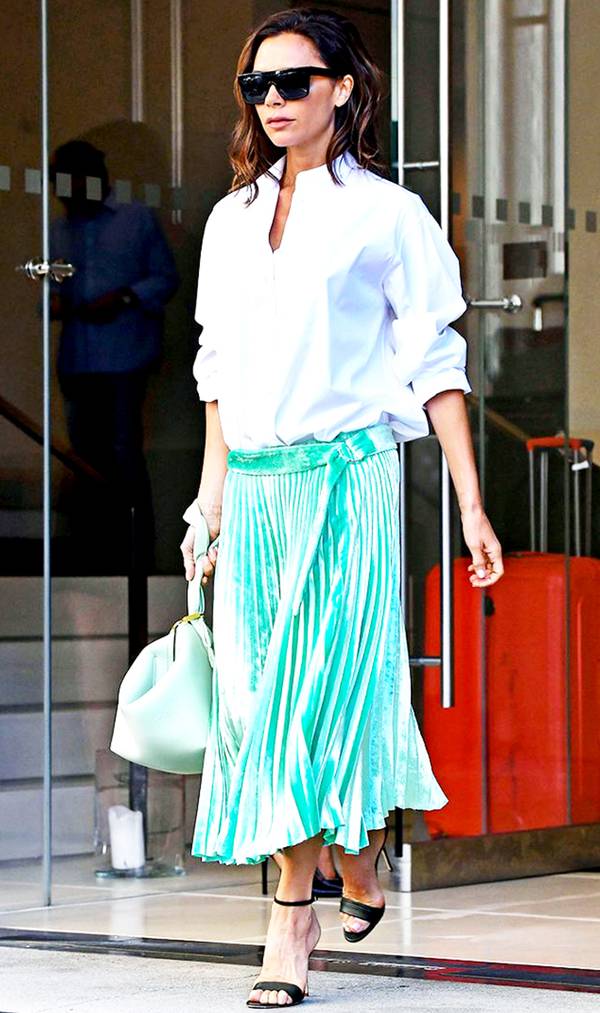 What do the outfits of Victoria Beckham tell about her Net Worth?

How come there is a never-ending supply int the repository ‘outfits of Victoria Beckham’? Perhaps it has to do with her fashion business. She has a lot of variety to choose from? That and she has her line of fashion design that fuels her collection and she has written a whole book about fashion sense. That book alone should explain why her outfits stand above the rest. Though the book is almost two decades old, it’s clear her dressing sense has evolved since. On the topic of ‘Outfits of Victoria Beckham as per her Net Worth’. We would say it has a lot to do with, she has a net worth of $ 450 million, a combined net worth with her retired football husband David Beckham. Being in the limelight, owner of a fashion line, and married to a football champion; it’s as if outfits Victoria Beckham has to be of that level or it won’t do.

If there is one thing we know about Mrs. Beckhem it is this, there can never be a definitive list of her top 10 remarkable outfits Victoria Beckham. Some celebs wear outfits made by the designer based on their taste, Victoria makes her outfits. And it doesn’t seem the 48-year-old singer is gonna stop trying new combinations of clothes. Perhaps it is her ode as an artist to entertain the audience in every way possible. But the ex-spice girl member has a sense of security for her children. She sees the need to develop responsibility and caution in her youngest daughter even at the cost of being questioned a little. That didn’t deter her from keeping her daughter safe from the harms of the internet. But she is not alone in this, her husband shares the same opinion with her and doesn’t allow their daughter to have a social media account.

Also Read: Why Michael Buble Fans Are Mad At Him: See How Fans Are Reacting