Here, we will find out about the top 10 characters that were based on historical characters. 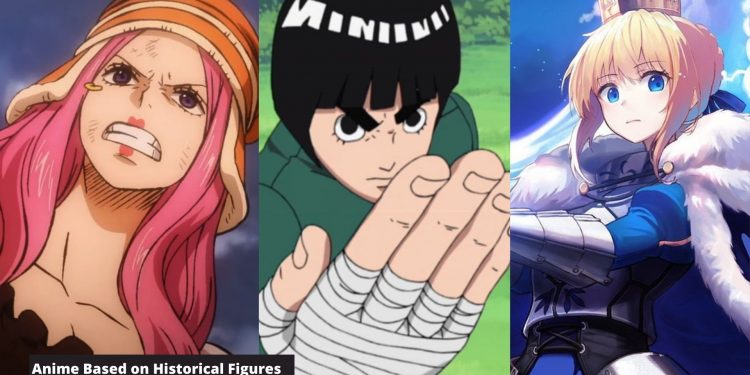 We all love anime, but sometimes we come across a character that resembles a real-life person. They prop their heads suddenly, and we are kept wondering where we have seen him/her. It is almost undeniable that there won’t be a reference to Victorian England or Hollywood actors in anime or manga series. The world of anime is scarred with characters that are based on real people. Anime belonging to the gacha-game or Battle Royale genres have done that quite a number of times. Whether we like it or not, we are bound to come across characters that might be loose adaptations of Nikola Tesla or Leif Erickson. In this article, we will be having a look at the top 10 anime characters based on historical figures.

Not only that, but few anime have been based on historical concepts. Even the massively popular Fate series. The Holy Grail War is quite iconic when speaking of the history of Western civilization, mainly Europe. The concepts of casters, riders, and archers are purely taken from the historical past. The creators can also be blunt at times and go out to adopt a 19th century England aesthetic, like in the Pandora Hearts or the Viking and Norsemen references in the Vinland Saga series. Even the all-time favorites like Demon Slayer have adopted historical and real events. However, these references in anime, more than most, show how cultured the creators are and look super-cool. Mentioned below are a few of the historical characters, the greatest of its time.

10. Jewelry Bonney in One Piece

Jewelry Bonney, in the One Piece universe, is great to start off the list. Bonney is the one and only female captain of the Worst Generation in the series. She leads a bunch of unruly, barbaric pirates and has a large bounty on her. But, she escapes any situation with her quick thinking and unique combat style.

However, the character has been based on an Irish female pirate called Anne Bonny. Anne Bonny was an active pirate in the Caribbeans. Her attire, as described in the history books, is manly. She had a bad temper and was good with numbers. Later on, caught by the authorities, she was a major influence on the character in One Piece.

Naruto is one hell of an anime series. It has been life-changing for many and is considered to have the best fight scenes in anime history. It is popular and has the largest fan base on the entire planet. Naruto defeats all odds to become the best in the face of all obstacles. However, we come across a character in the series, Rock Lee. Lee might not come off as powerful as others but is based on Bruce Lee. Bruce Lee, the greatest martial artist of his time, is the only probable source for the inspiration of Rock Lee. This was indeed quite amusing to watch and is one of the best we came across in our list of anime characters based on historical figures.

8. Anne Frank in Anne no Nikki

The anime series is the direct adaptation of the Diary of a Young Girl. Written during the Holocaust years, it tells the story of a Jewish family, the Franks, residing in an abandoned office. While Jews are mercilessly slaughtered throughout the country, Anne and her family are hiding it out. Anne Frank is considered to be one of the most prominent literary figures of the time. The anime follows the same storyline as the book. There are heavy references to the events of World War II and Nazi Germany. The character Anne is the living image of Anne Frank.

I guess no one needs an introduction to these characters. The anime tells the story of the two Gods that are aiming to spend their vacation together. It is through anime like these we get to know about the creativity and sentiments of Japanese creators. Both these religious gurus are put into a room in Tokyo as they try to understand modern Japanese culture. However, the twist is both of them still possess their superpowers while they roam the streets of Japan.

The anime provides some great insights into religion. It mostly uses humor and word-play to bring out the true meaning. A great anime with literally two Gods is on my recommended list, at the least.

Arslan Senki tells the story of the war in a land that is inspired by the Middle East. Prince Arslan has escaped as the kingdom of Parish is betrayed and about to fall. Arslan will return back to the throne with help from his allies.

Arslan is loosely based on the ancient Persian tale of Amir Arsalan. It also draws elements from Cyrus the Great. Cyrus, the ruler of Egypt who created an empire reaching up to Southwest and Central Asia. There are several characters that represent the historical 6th century in this series.

The story in Aiura revolves around three high school girls who have quaint adventures together. They are fun-loving and easy-going, with whom random things keep on happening. The girls namely, Amaya, Iwasawa, and Uehara, won’t stop having fun and is undoubtedly one of the most light-hearted and fun slices of life to binge out there.

But, the main reason for including Aiura in this list is for the appearance of Steve Jobs as the CEO of Apple. He was in this series from the beginning and has been named Steven Paul Jobs. He appears at random during the girls’ adventures.

The anime is deeply rooted in world politics, and you get to watch mahjong matches and some background insights on Kim Jon Il, Thatcher, and Putin. But, maybe the anime reached its heights when they showed Hitler arriving from the moon. A series that focuses on famous world leaders, it is one of a kind anime series.

However, Junichiro Koizumi is the absolute master of Mahjong and has no match when it comes to inventing new techniques to defeat his opponents.

Bungou Stray Dogs has references to a number of authors. One such is the great Osamu Dazai. The protagonist of the story, Atsushi Nakajima, starts to see a mysterious tiger one day. Further, he comes across Dazai and the group of supernatural detectives who try to rid the world of danger. Atsushi joins them to face the anger of a mafia.

However, the main focus would be Ichiyou Higuchi. Higuchi possesses no supernatural powers but is very efficient in hand-to-hand combat. She is the namesake of the Japanese writer of the Meiji period. She is known to be Japan’s first female writer of modern literature.

Vinland Saga tells the story of Thorfinn, who grows up wondering if he could ever travel to Vinland like brave sailors. Vinland is the world of dreams for him. Compared to his cold and frigid home in Iceland. However, as the war keeps on dragging between the English and the Danes, Throfinn must exact his revenge and kill the person responsible for his father’s death.

Vinland Saga does an extremely good character portrayal of Leif Erickson. The first European in history to have ever set foot in North America. Leif Erickson or Leiv was a Norse explorer from Iceland who arrived in North America half a millennium before the great Columbus. However, the anime obviously goes beyond that. It has quite perfectly conceptualized his love for adventure. He also could be considered as one of the best anime characters based on historical figures.

1. Saber in the Fate series

The Fate series should top this list as it has adopted elements directly from European history. The series revolves around summoning great warriors to fight over the Holy Grail. It has taken up the concepts of lancers, archers and clearly refers to the rudest historical war fought between the followers of two separate religions.

Here the character in question is Saber, who is a very unsuccessful characterization of King Arthur. She could have been better, according to fans, but however, Saber is a clear reference to the historical King Arthur.

We hope that you thoroughly enjoyed our list of anime characters based on historical figures. Some of the character references were quite hard to catch, while the others were as plain as daylight.

10 Anime Where The Main Character Is Secretly Super Strong