10 Anime Where The Main Character Is Secretly Super Strong 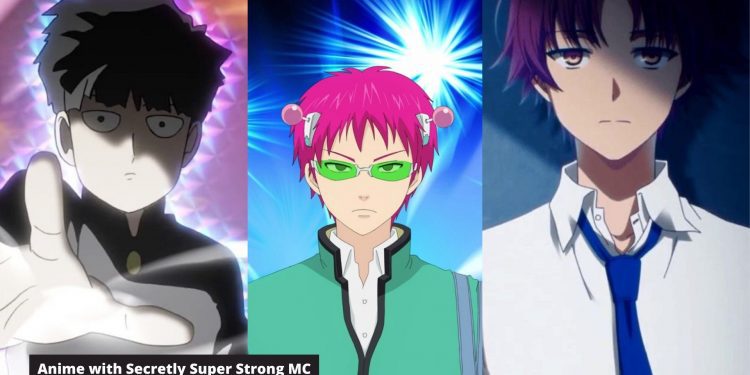 Anime has laid the foundation for storytelling and character building. They have this signature style of masking a character’s true potential to reveal it at a very unexpected time. Creators have consistently done this to produce an effect of awe and wonder. Just like the villains, we first underestimate the power of our heroes, yet in times of crisis, they always seem to be better than we thought. There is no doubt that we have all experienced them in some anime series. However, there is some exceptionally strong mc in a few anime series that we just cannot fathom how powerful they are. Here are the top 10 anime where the main character is secretly super strong.

However, if your favorite anime or its character is not here, no need to worry, we have gone for the top 10 through our preferences and knowledge, and yours may have been missed out. Do comment down below to let us know which characters you believe should make the list. These characters had managed to surprise the fans and have gained immense reaction when we came across their best. However, what is more interesting is that there are certain characters who can also be at their best to date. Whether it is physical strength or just mental superpowers, these are some of the characters that could probably fight every villain in the anime world singlehandedly.

10. Saitama in One Punch Man

Saitama is the protagonist of One Punch Man. He is the most powerful character in the anime series but faces an existential crisis as he has outgrown everyone in terms of strength. Saitama is so overpowered that he sends enemies flying with one single punch. He could even take down a meteor with his normal punches. Hence, there is no doubt that Saitama is the most powerful among our top 10 anime where the main character is secretly super strong.

Following in the footsteps of One Punch Man, this series features a young school kid that possesses immense psychic abilities. He might come off as pretty harmless but can exorcise a house crammed with evil spirits. He always suppresses his true powers but only to impress his crush Tsubomi he performs different tricks with his gift. To add more to this, he directly works under a con man named Arataka Reigen, who claims to have psychic abilities, but in reality, he just wants to make money.

8. Kusuo Saiki in The Disastrous Life of Saiki K

Saiki has a great store of psychic powers, which makes him super strong. Therefore he must pretend to be weak to come down to the level of any ordinary man and stay out of trouble. He has the blessing of almost every superpower imaginable, from x-ray vision to telepathy. But, it works more against him than in favor. He always dreams of a quiet and peaceful life. However, it is anything but quiet.

A minor God that goes by the name Yato wishes to gain a massive following in the number of worshippers. He takes to killing low-level demons so that he can earn 5 Yen. He does so purely for raising funds for his own shrine. However, there is always an air of mystery about Yato, and his story remains unclear. In the anime, it is shown through flashbacks and recollections by other characters.

6. Kiyotaka Ayanokouji in The Classroom of the Elite

If you have watched The Classroom of the Elite, we are sure that you might be well aware of Kiyotaka Ayanokouji’s powers. For those who do not know, well, let us start off with the fact that he purposefully did not get full marks in his school entrance exams.

Advanced Nurturing High School is a reputed high school, only the best of the students can go to. They hold an extremely difficult entrance exam that only the best can pass. He uses his intellectual abilities to actually get exactly 50 out of 100 points so that he could get into 1D, which is considered to be the least prestigious. Throughout the anime, we find him to be far more superior than every other student in the school, yet for camouflaging himself, he deliberately stays in the D section. It takes a lot of intellect to stay average.

The story of Chrome Shelled Regios is based on an alternate planet that is run by nanomachine beasts called Filth Monsters whereas, humans are forced to live in cities called Regios. However, in the City of Zuelini, Layfon Alseif wishes to start a fresh life forgetting about the military past. Kalian Loss, the student council president, gets to know about this and decides that he should join her group. In the series, Layfon struggles to keep away his dark past and conceals his powers. His previous life cannot stay a secret, and it might tear people apart.

Shiba Tatsuya is another one of the characters who try to act weak or just purposefully hide their abilities in High School. In Mahouka Koukou no Rettousei, magic is taught in a more technical way. Here, the students are divided into two parts- Blooms and Weeds. The Weeds are usually looked down upon by the Blooms. The siblings Tatsuya and Miyuki take the exam, and they get into Weeds and Blooms, respectively. However, what is interesting is that Tatsuya had purposefully done average in the exams so that nobody would get hold of him. Also, later on, it was revealed that though we find Tatsuya the most powerful in the school, he still has a limiter on his magical abilities. Imagine being the most powerful and still having a limiter! Shiba Tatsuya falls into our one of the top 10 anime where the main character is secretly super strong.

Also Read: Top 10 Anime Similar To Horimiya That You Should See

Vash has a huge bounty on his head after destroying almost a city by accident. The total bounty on his head sums up to sixty billion dollars and is on the radars of many bounty hunters. Vash gets his name ‘The Stampede’ from destroying a whole city called July. But, Vash does not remember any of it due to retrograde amnesia. Thus, throughout the series, he is just trying to save the life of others without killing a person. Even though he is approached by big bounty hunters who try to kill him at every step, Vash appears a complete pacifist and denies harming his foes.

Kenshin is one of the best well-known living swordsmen out in Japan. However, he has now taken a vow to never ever kill any person. Soon after taking the oath, he arrives in Tokyo and stays at Kamiya Dōjō with a lady who he saved from an attack. What follows is his quest to keep his oath and also try to keep the peace in the country. You will have to watch this very interesting anime to know what happens next. However, as we know that usually, most anime main characters would do anything to keep the country peaceful and safe; it comes as a challenge for Kenshin to face the villains and go to small battles without having to kill the opposite person. We were quite impressed by how much Kenshin would try to be diplomatic rather than opting for the easier way out by killing the villains.

He is no undoubtedly another of the amazing main characters in our list of top 10 anime where the main character is secretly super strong.

Ichirou Suzuki is a programmer in his thirties. Depressed with the regular job, he takes on the chance to get some quality sleep just to wake up in a fantasy world of RPG games. Boosted to a level of 310, he is the single most powerful character in the series.

The world he is in is filled with a number of games that he was debugging in the real world. While still inside the game, he realizes he has gained a serious increase in his level. He wipes out an entire army of lizards and has learned new tricks.

Top 10 Anime like Squid Game That You’re Missing Out!