In more than 81 episodes throughout the show’s four seasons, audiences have dutifully followed a youthful group of adults as they dealt with romances, failed relationships, or upheaval while enjoying a sweltering summer on an island.

Another well-liked reality television program from the early 2001s, Laguna Beach: The Authentic Orange County, served as inspiration for the creators. In late May 2022, season 4 of the television program was successfully wrapped up, and the fifth was launched immediately.

What Has Happened In Siesta Key Season 5 So Far?

Jumping into this new environment, Juliette feels cut off from Chloe & Amanda. We saw that the relations that Jordana share with Sam are under scrutiny. Another sad moment was when Brandon was under pressure to advance in his musical profession.

Chloe from season 5 of Siesta Key.

We also saw that Sam’s focus is divided among Meghan’s threat and Jordana’s BBL; Brandon is offered the chance to establish himself beside a legendary member of the music industry. The rumor that Meghan has already been circulating about her relationship is revealed to Juliette.

We witnessed that when Sam is forced to decide on the request, he harms himself. Beginning to interfere is Brandon’s new love interest. Sam & Jordan deal with the fallout from their sensational kiss; Juliette looks into Meghan’s claims that Clark hooks up with her; Lexie & Mike’s partnership breaks down as rumors of inappropriate behavior spread.

Juliette and the remaining group members leave Sarasota and travel to the 305 in search of more exciting opportunities. The season’s focus will be new beginnings in terms of relations, professions, and lifestyles. The first episode is titled Welcome To Miami.

The show’s focus will be Juilette entering the spectacular Miami, where she intends to rule everything and make her mark. She’s going to get to know the locals and the community. She also feels distant from Sam & Chloe. The shift harms their relationships.

People will start to form opinions about Sam and Jordana’s problematic relationship and ask many questions. Brandon is also starting to feel the pressure to progress. Viewers are eager to find out how that turns out. They are happy to see their favorite actors in new roles and eager to watch them learn how to adapt and seize possibilities.

Juliet’s swimwear line, which made its debut soon after Kelsey’s, was the main topic of the last episode. Sam, Juliette’s partner, also relocated. They held a wonderful party and invited a select few people.

Juliette sought to talk to Kelsey regarding her swimwear company, but she was unreachable. Brandon notified his son’s mother, Delainey Shae, that he wanted to modify the conditions governing his son’s care. 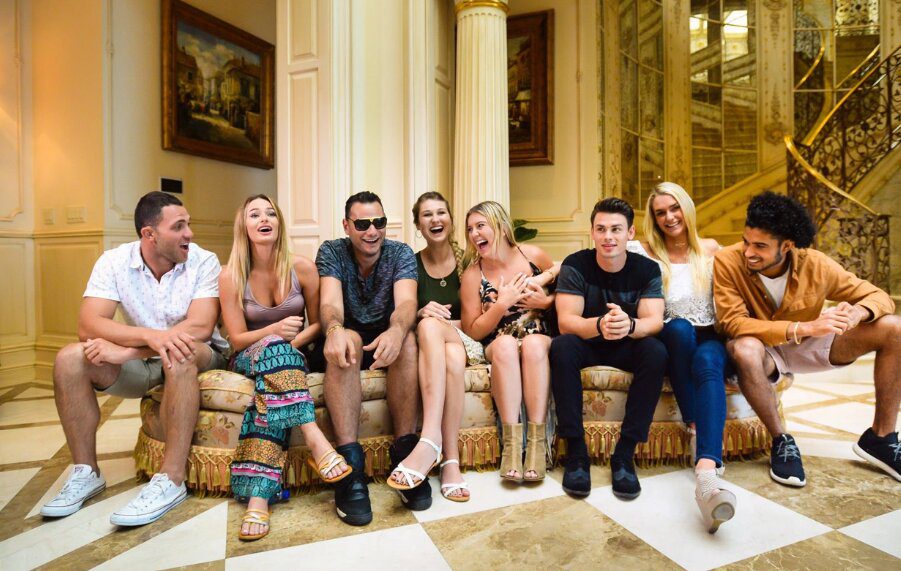 The whole cast of s5 of Siesta Key.

Even though she wanted to tell him about herself and saw him try to woo other women, she was a little reluctant. But it was also hinted that the romance was more than just a one-night stand. Season 4’s spectacular season finale took place in May.

Following that, there was a reuniting episode when the level of conflict doubled. As the host, Rachel Lindsay attempted to maintain order, Juliette and Brandon left due to the questioning. She also tried to mend a few of the members’ broken bonds.

Even Kelsey, notwithstanding the treachery and backbiting, nearly made peace with Juliette. The audience highly anticipates the progress of their friendships in this season.

The main cast of s5 of Siesta Key.