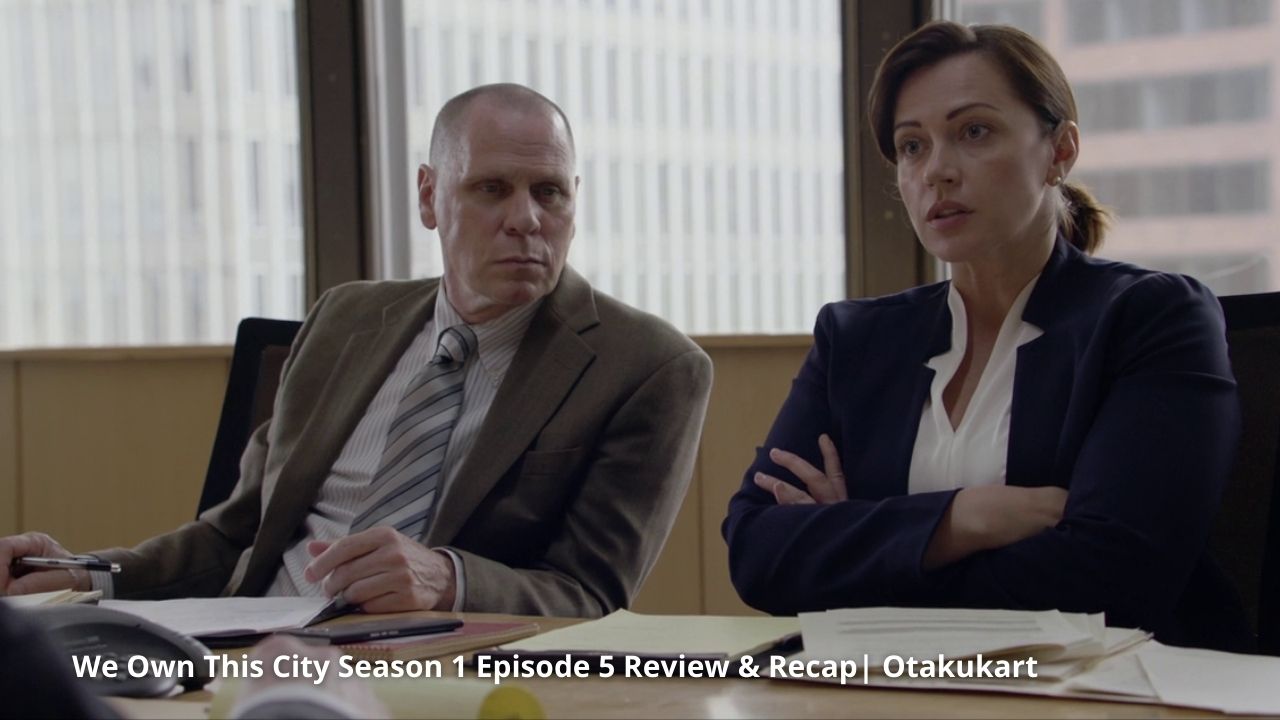 We Own This City Season 1 Episode 5 takes us to the point where a number of cops from GTTF were finally placed under arrest. For the past few episodes, the show continued to dive deep into the story of Jenkins. This way, we came to find out how the system present in Baltimore Police Department corrupts almost each and every cop there.

We saw Jenkins starting off as a rookie to learning the ways of Baltimore from his senior. Eventually, he got used to the system and abused it multiple times. All thanks to his seniors coming to his aid. At the same time, where Jenkins rose in ranks, fate also saw him going down. The FBI was looking into the situation. The fifth Episode sees the FBI interviewing colleagues of Jenkins as they form a strong case against the corrupt cops of Baltimore.

We Own This City Season 1 Episode 5 Recap

We Own This City Season 1 Episode 5 opens with the FBI agents, this time talking to Gondo and Rayam about the functioning of the police in Baltimore. They try to cause a rift between both of them to figure out if someone blames the other. Turns out that was the case as both of them confessed to the FBI but against each other.

In one of the flashback sequences, we see the FBI agents Erika Jensen and John Sieracki tapping Gondo and Rayam. Both of them somewhere knew that the FBI was keeping an eye on them. Especially Gondo, who was all flashy about his money and expensive stuff he had on him.

Gondo and Rayam soon revealed how they worked around as the officers and stole from people. This saw the civilians losing their trust in the Baltimore Police Department. They also talked about a new officer Jenkins was fond of. They used to call him K-Stop. Unlike them, he was against their ways. When cops went against the ways of GTTF, Jenkins made sure to transfer them to another unit.

Eventually, the arrests came in. Wayne Jenkins, Daniel Hersl, Momodu “G Money” Gondo, Jemell Rayam, Maurice Ward, Evodio Hendrix, and Marcus Taylor were some of the cops brought in. Kevin Davis, in his statement, called them 1930s-style gangsters who were willing to do whatever they wanted to.

Amidst all of this, Nicole Steele worked to finalize the terms of the consent decree for the BPD. In order to do this, they met James Otis and came to find out how the cops harassed civilians and stole hard-earned money from them. Also, the fact how despite suing a cop, the case never reached the honorable court.

Nicole Steele and Ahmed Jackson put forth the need for signing the decree before Trump takes over. But the expense of putting the decree into action was an issue. Until commissioner Kevin Davis came into the picture, he needed to make budget cuts and find a way to fit the decree into the money they had in their hands.

We Own This City Season 1 Episode 5 Review

We Own This City Season 1 Episode 5 dives deep into the stories of different cops who spent their time on the sidelines for the most part of the previous episodes. The fifth Episode carries a slower pace but invests time to tell us how somewhere, these corrupt cops had it coming.

Sooner or later, they were going to be questions about their deeds. Still, they were relieved enough to do what they did. Just because they knew their seniors would come to cover for them. But this time, Federals had taken charge.

Episode five of We Own This City on its side also went through the same thing all over again. We already knew how the cops stole money from the citizens and how they framed them or harassed them. Watching the show reenact similar events time and again somewhere made the Episode lengthy and unnecessary at times.

Apart from all of that, episode 5 brings all the interviews together the FBI has been conducting with the members of GTTF to get the gist of their work. We get a story from each side. After going through all the things we witnessed about the cops in the past few episodes, Episode 5 serves as the first one where justice marks a victory over them.