Do you miss the time when you were addicted to watching K-dramas till late at night? We know what you might need right now! 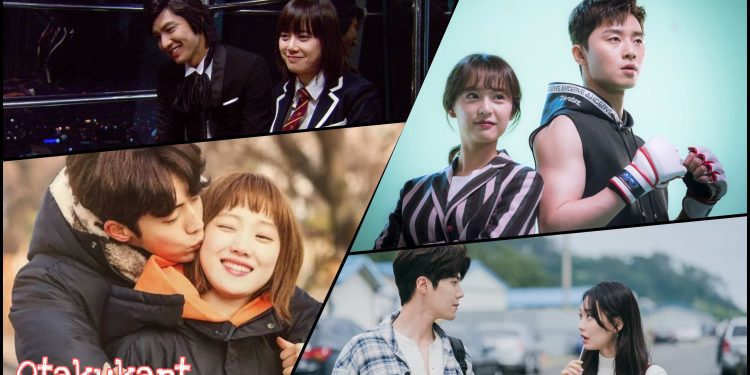 Probably every one of us has gone through a time when it’s hard to drag ourselves out of the bed or stay motivated for our dreams. We fail to think of anything in a positive way, have our thoughts scattered around here and there, and keep procrastinating. We need an external factor to come out of our slump, and what can be a better approach to clear our mind and soul than watching some refreshing and inspiring K-dramas?

When no words of comfort or encouragement work, our favorite K-drama characters make us feel alive and fill our dull lives with colors! But again, after watching loads of K-dramas one after the other, either we get bored of the similar concept or have our standards raised, so much that we keep drooping everything we start watching. We understand that feeling of confusion and anguish. So if you are in a similar situation and want to bring positive energy back to your life, get on this introspective ride! Here is a list of our top eight K-drama recommendations for you!

‘Her Private Life’ might be the most relatable K-drama for every hardcore K-pop fan who obsess over their favorite idols and doesn’t prioritize anyone or anything more than it. That’s exactly how the female lead, Seung Deok Mi is— a thirty-three years old professional curator of a museum whose world revolves around the K-pop boy group, White Ocean’s Cha Si An. However, this is also the biggest secret of her life which she doesn’t want to reveal to anyone. When she encounters the museum’s new director, Ryan Gold, being a fangirl turns out to be something more thrilling than riding a roller coaster in an amusement park!

Ryan Gold used to be a famous painter abroad, but a particular incident made such a huge impact on him that he couldn’t pull himself up for painting anything anymore. Although Deok Mi and Ryan Gold hate each other in the beginning, destiny makes them cross paths again and again till their lives get completely intertwined.

When it comes to choosing exceptional scripts, no one compares to Park Seo Joon. Adapted from a webtoon bearing the same name, ‘Itaewon Class’ tells the motivational story of Park Saeroyi, whose life turns upside down after encountering the school bully Jang Geun Won and his father, Jang Dae Hee, the powerful leader of the Jangga Group. Not only is he expelled from school, but he also ends up losing the only family he had, his father, in a hit-and-run accident executed by Jang Geun Won. On top of it, he has to spend three years in prison after being accused of raising his hands at the culprit.

While any regular person would have given up on his life after going through everything, Park Saeroyi pulls himself up, strives for years doing minimalist jobs, and seven years later, opens a pub called ‘DanBam’ in Itaewon. However, his revenge tale starts to get even more difficult from here as Jang Dae Hee leaves no opportunity to bring him down. The show is uplifting and emotional, and we immediately develop a personal connection with his character.

No matter how many times you watch Lee Sung Kyung and Nam Joo Hyuk starring ‘Weightlifting Fairy Kim Bok Joo,’ there is no way you will get enough of their ‘swag’! Whether it is the friendship between the trio of Bok Joo, Jung Nan Hee and Lee Sun Ok or the playful chemistry between the lead pair, can we ever get tired of it! The story revolves around a weightlifter named Kim Bok Joo in the sophomore year of her college who has never been in love. Throughout her life, the only two things that can make her inspired is eating fried chicken and lifting weights!

However, when she falls for the kind gesture of a doctor, her entire world starts spinning in the opposite direction. She pretends to be a music student who has no relation with weightlifting in order to keep meeting him. On top of it, she discovers that he is none other than the cousin of her childhood friend, Jung Joon Hyung, who loves to annoy Bok Joo. The drama is indeed inspiring, sensible, and comforting at the same time for every K-drama watcher.

‘Fight for My Way’ teaches us that it’s never too late to pursue our dreams no matter what the world says. The story centers on the lives of four friends— Choi Ae Ra, Ko Dong Man, Kim Joo Man, and Baek Seol, who have been together since their childhood days. However, this Fantastic Four have been down on their luck and opportunity almost all their lives. Ko Dong Man has to give up on his career as a professional taekwondo athlete while Choi Ae Ra keeps failing at being a TV anchor just because she was a little older in age.

On the other hand, Kim Joo Man and Baek Seol have been love birds for six years, but their love becomes the victim of misunderstandings and foul circumstances at work. Not only will the characters make you smile, laugh, cry but also inspire you to grow personally. It is a beautiful and realistic ‘Best Friends to Lovers’ K-drama that we would like to recommend.

If you are going through a dark phase in your love life, this K-drama can save your relationship with people. The show follows a very mature and realistic approach, teaching us that the difficulties two people face in their lives can be explained in the most simple and effective way and overcome if they stick to each other till the end.

The story revolves around a woman named Yoon Ji Ho and a man named Nam Se Hee in their early 30s, who decides to have a contract marriage. Although Se Hee is poor and drowned in mortgages, he owns a home, while Yoon Ji Ho is financially struggling and yearns to have a home after leaving her own. While both of them aren’t interested in dating, they end up becoming housemates due to the situation.

‘Start Up‘ might be the kind of K-drama you have been craving for long if you like a fast-paced and light storyline without it being too fluffy or sentimental. The story revolves around a girl named Seo Dal-Mi who aspires to become the next Steve Jobs. She drops out of her university and works part-time in order to accumulate money for starting her own business. On the other hand, Nam Do-San is a genius savant who had started his company two years ago.

Despite his consistent efforts, it is gradually going down. A misunderstanding causes Dal-Mi to believe that Do-San is her childhood love who used to send her letters whereas, in reality, it was Han Ji-pyeong. Do-san decides to take advantage of this opportunity to work with her and save his business. The story is indeed inspiring as we witness the characters working to turn their virtual dreams into reality.

’18 Again’ might sound like a typical rom-com if you take a glance at the title only. However, it is a drama that can redefine your life, giving lessons on family love and sacrifices. The story revolves around a man in his late thirties, Hong Dae Young, who used to be a popular high school boy with a flourishing career as a basketball player. However, circumstances changed when he gave up on his dreams after being a father at a young age. His present life turns meaningless as his wife decides to divorce him while his children aren’t close to him either.

While thinking of the good old days, he wishes to go back to becoming the 18-year old boy before all of these had started, and surprisingly, his wish comes true. And this marks the beginning of Dae Young in the body of his 18-year-old self trying to fix his fate. He enrolls himself in the same school as his son and daughter and tries to understand them as their friend. No matter what genre of K-dramas you prefer, ’18 Again’ won’t disappoint you. In fact, it is so appealing you might not even want to skip a second of it!

‘Hometown Cha Cha Cha’ might be the most wholesome series that you might have watched in a while, and if you haven’t yet, please do yourself a favor as our Dimple-couple will squeeze all the negativity out of your life. Yoon Hye Jin and Hong Du-shik are not only different from each other in their personalities but also their outlook for the world. While Hye Jin is a self-righteous dentist with practical thinking, Du-shik is a kind and carefree soul who lives his life on his own conditions. Although they don’t seem to be compatible with each other in any way, Hye Jin keeps encountering him again and again after opening a dental clinic in her hometown, the seaside village of Gongjin, where Du-shik lives too.

The storyline is not only refreshing and engaging but also moves forward in a very calming and charming way. Even the side characters get to share their own struggling stories and aren’t just there for being the matchmakers— something that’s rare in Asian dramas. Watching the eye candy leads acting all cute, adorable, and mature at the same time, now that’s something worth spending the nights for!

‘Boys Over Flowers’ isn’t a type of K-drama that needs an introduction— the title and the cast says it all. We are pretty sure most of you have watched and rewatched the drama for the nostalgia and old-school love concept but if you haven’t, what are you waiting for! A classic rom-com drama, ‘Boys Over Flowers’ is about a poor girl named Geum Jan Di who gets admission in a prestigious high school, reserved only for the rich, with a scholarship. Little did she know that she would become the bullying target of the most popular group of boys of the school, F4.

However, Gu Jun Pyo, the leader of F4 and the son of the owner of Shinhwa Group, who is both arrogant and mean, falls in love with Geum Jan Di. But the one Jan Di likes is his best friend, Yoon Ji Hu, who has always been soft towards her. A typical love triangle it is, for sure, but it’s amazing how the series makes everyone feel so happy and nostalgic!