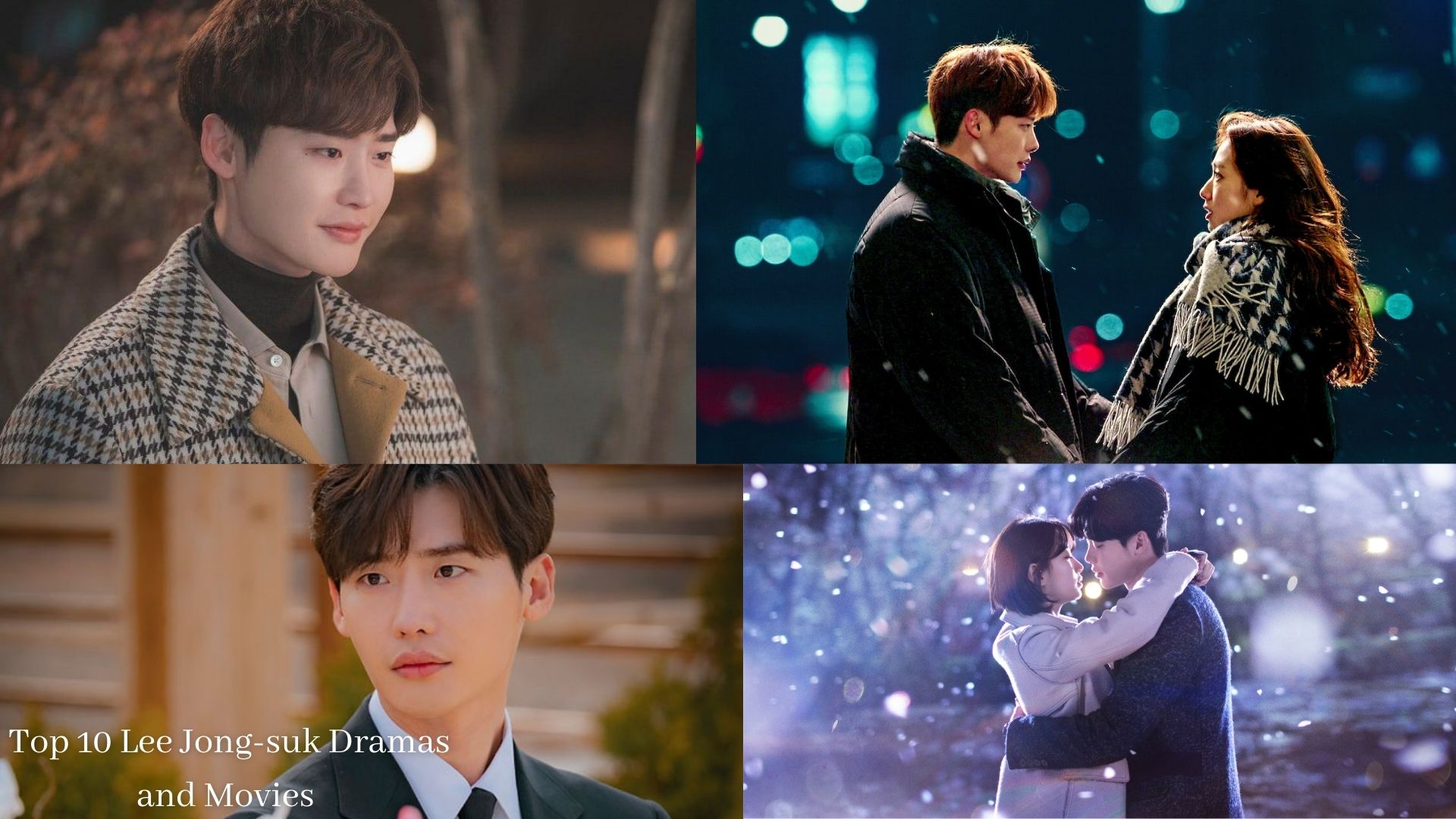 Lee Jong-suk is one of the most popular faces in the South Korean Entertainment Industry. Known for his good looks, smooth personality, and powerful screen presence, the Hallyu star has finally returned from his military service. He was enlisted in May 2019 and was finally discharged from the same on January 2, 2021. His post from Instagram captioned “I am back” surged through the internet like a wildfire, and fans from everywhere were eager to know his future plans.

The 31-year-old actor is known globally for his charisma and amazing acting career. His screen presence is capable of getting everyone hypnotized, and that’s why he is one of the best out there.  All the TV dramas and movies delivered by him have won millions of hearts and good ratings. Lee Jong-suk has indeed given one of the best visual content for all the fans and viewers out there, and here we have made a list of the must-watch ones.

So, let’s have a quick look through it and be sure to add all of them to your watchlist if you haven’t already watched them.

Secret Garden or the modern Cinderella story the show is one of the best by him. Directed by Shin Woo-Chul the drama series portrays the amazing relationship between a stuntwoman named Ha Ji-won and a high-end department store CEO named Hyun Bin. They are completely opposite of each other and also from two different backgrounds. Both of them have a rough beginning together, but eventually, they grow out their differences and develop a soft spot for each other.

Though, happily ever after is a very difficult state to reach. Their relationship starts to experience disturbance when other people start to meddle inside. Things get super confusing and complicated when the pair magically start to switch bodies. Well, isn’t that creepy and fantastic?

Lee Jong-suk is seen in the supporting role in the drama. He plays the character of Han Tae-sun, who is a young genius musician discovered in Jeju Island by Osaka.

The ninth episode of the third season of the KBS Drama Special, South Korean anthology series Directed by Baek Sang-hoon, the show follows the story of a terminally ill woman named Lee Shin-ae who has given up on any hopes and is ready to embrace death. Though, she is forcefully admitted into the hospital by her husband.

There she meets Yoon Jung-hyuk, who is a popular university student and also a regular comer of the hospital as a caretaker of his girlfriend, who is also sick. Jung-hyuk falls in love with Shin-ae and learns about the meaning of true love. On the other side, Shin-ae experiences the most beautiful moments of her life with him, and as she nears her end, she learns the true meaning of life and love.

The 71 minutes long drama will definitely make you ugly sob and, at the same time, will warm your heart with a very influential story.

The KBS drama is one of the most popular ones out there as it portrays the real-time issues faced by teenagers. The modern days dilemmas and struggles of teenagers such as bullying, suicides, school violence, deteriorating teacher-student relations, private tutoring, and many other issues are highlighted in the drama series.

The story of the series is set in the Victory High School, where Jung In-Jae and Kang Sae-chan are two homeroom teachers and completely different from each other. Though, they team up together to manage the toughest class of the school filled with bullies, academic underachievers, and scary parents. They are doing their best to help the students and also to overcome their personal issues.

In the series, Lee Jong-suk can be seen in the role of Go Nam-soon, one of the students from the toughest class in the school struggling with basically everything.

We meet Jang Hye-sung, who is a public defender with a very traumatic childhood. She grew up scratching and struggling for money to fulfill her basic needs, and now reaching up on a position she does everything just for money. Though, her personality and aim take a major turn when she meets Park Soo-ha, who is a high-school senior with a special ability to read people’s thoughts by looking into their eyes. The young man has been looking for her for years after she has testified against the suspect of his father’s murder.

Together and with another lawyer named Cha Gwan-woo in their team, they solve different cases using unlikely but effective methods.

The SBS drama was a major success as people left loads of positive ratings and reviews behind. If you haven’t already watched it, then this is your cue to do so.

The medical romance drama takes you to the rough adventure of a couple who are trying to escape North Korea and get to the South. But things go wrong when one of them is left behind.

We meet Park Hoon, a young talented cardiothoracic surgeon who was tricked and sent to North Korea with his father, who too was a famous doctor. Later, they were denied access to South Korea. Park Hoon fell in love with Song Jae-hee, and together they made a plan to escape North Korea after his father’s death.

Their plan was partially successful as only Park Hoon was able to escape the country while Jae-hee was left behind. They lost all the contacts. Reaching South Korea, he starts working as a doctor in a top hospital Myungwoo University Hospital. Later, he meets another doctor named Han Seung-hee, who works in the same hospital. She looks exactly likes Jae-hee but claims not to know Park Hoon.

We meet a broadcast journalist named Choi In Ha, who has developed a condition known as “Pinocchio syndrome,” which makes her break into a series of hiccups whenever she lies. Her rookie colleagues are Choi Dal Po who’s not so impressive appearance masks his true personality, and sharp memory, Seo Bum, who is a wealthy heir, and Yoon Yoo Rae, who fangirls over everything, and her knowledge comes very handy in covering up the news.

All of them are working together as a team and are trying their best to pursue justice at such a young age of 20 and also discover them in the process.

Directed by Han Jae-rim, the South Korean movie “The Face Reader” is one of the highest-grossing movies in the country in the year 2013. It bagged several awards and nominations, including the Best Film, Best Director, and Best Actor at the 50th Grand Bell Awards. Moreover, this is the first and only historical drama by Lee Jong-suk to date.

Set in the Joseon dynasty, Nae-gyeong is the most skilled face reader of the time who was living in seclusion before he was offered a lucrative partnership by Yeon-hong. He accepts the offer and later gets involved in a murder case. He manages to successfully identify the murderer with his skills and is soon acknowledged by the king, who orders him to identify all the potential traitors who are a threat to his reign.

After the death of the king, Nae-gyeong is courted by Grand Prince Suyang, who himself has a wish to become the king after assassinating his younger successor, Danjong. Though, Nae-gyeong remains true to his loyalty towards the late king and chooses to protect the young successor. Though, this decision of his lands him into one of the biggest power struggles in the history of the Joseon dynasty.

The story is set in 1982, where we meet Young-sook, who is a feared leader of a female gang at Hongseong Agriculture High School. She has mastered the mask of cold and toughness but has a secret crush on school’s playboy named Joong-gi. He has wooed every girl in the school except Young-sook as Gwang-sik, who is the leader of a rival school’s male gang, views her as his girl.

Later, a beautiful girl arrives at the school named So-hee. Joong-gi falls for her at a glance, and this news makes Young-sook pick a fight with her.

Tension grows as Gwang-sik gets a sniff of the situation and starts harassing So-hee and instigating Joong-gil.

The South Korean television series was directed by Jung Dae-Yeon and is also known with other names like W: Two Worlds Apart and W. It ranked first in the Content Power Index in its premiere week and topped the viewership ratings with a rating of 11.63%.

We meet Oh Sung Moo, who is the father of Cardiothoracic surgeon Oh Yeon Joo, who has mysteriously disappeared while writing the last chapter of his webtoon titled “W”. When she goes to the office looking for him, she is suddenly pulled inside the monitor by a hand. Next, she finds herself on the rooftop of a building where a bloodied man is lying down.

She realizes that he is the main character named Kang Cheol of his father’s webtoon. She manages to save him and later discovers that she can only leave and enter the webtoon depending upon Kang Cheol’s feelings.

The South Korean drama series is directed by Oh Choong-hwan and written by Park Hye-Ryun. The drama is known for its exquisite plot points and engaging cast performance. The show did a fantastic combination of the genres of legality and fantasy.

We meet three young adults who have the supernatural ability to see the future through their dreams. The trio has a field reporter named Nam Hoon-Joo, a rookie prosecutor named Jung Jae-chan, and a police officer named Han Woo-Tak.

Some of these dreams show the nature of the crimes that Jae-chan has to investigate at a point in time, while others show some disastrous events that one or more of them will have to go through. Troubled and tired of the regular occurrence of these weird dreams, they form a team together and vows to prevent their terrible dreams from turning into reality.