The racing games are one of the most popular video games. Let's take a look into the top 10 best racing games that are a must play. 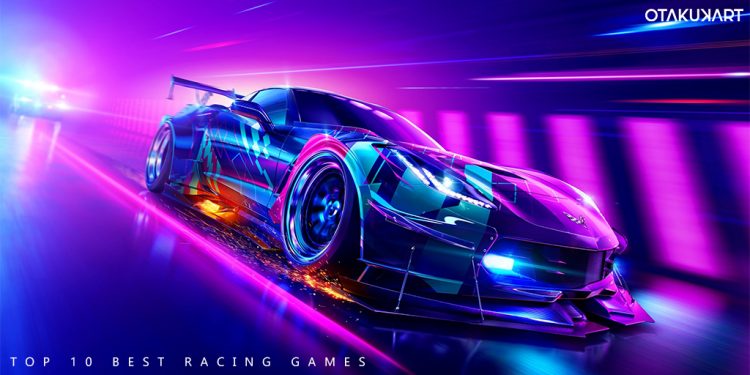 Racing games are unquestionably one of the most popular game categories. Who doesn’t want to have the best vehicle and hit it to the maximum speed and drive it through the road while defeating other cars on the road? However, it is pretty dangerous to operate at high speed on real-world roads. It is also challenging for many to become professional drivers or even buy an expensive fast car. But these fantasies came to reality all thanks to racing games. After all, racing your vehicles at insane speed on a virtual road is way safer than doing it on a real road. The racing games are usually based in a real-world setting or even an imaginary one. Racing game is one of the oldest video game genres, dating back to the 80s.

This video game genre has a long line of history and underwent so many evolutions that it’s mind-blowing. The first racing game came out in the 1970s, and it didn’t even have cars or bikes; instead, it had spaceships. Atari released the Space Race in 1973, where two players took the controls and raced against each other’s spaceship. In 1987, Namco introduced Pole Position, the first game which had roads and cars in it. Since then, there was no turning back for the racing genre, and it just got more extensive and more advanced. At present, there are countless racing games for gamers to enjoy. Let’s look into the top 10 best racing games that every gamer should play once.

Formula One is the most famous motorsport of the present time. The sport has given some great drivers like Michael Schumacher and Lewis Hamilton. Looking at these great personalities, many wanted to become an F1 driver, but it isn’t everyone’s job. But now, F1 fans can live the life of a Formula One driver in the F1 video game franchise. F1 2021 is the latest installment into EA’s infamous racing game franchise, which was developed by Codemasters. This game lets the players experience the life behind the wheels of an F1 driver. They can drive for established powerhouse F1 teams like Mercedes or Red Bull or start their own F1 team in this game.

Undoubtedly, Need for Speed is one of the most popular racing video game series. This game has a long history, from being a 2D game to becoming a visual treat with the most realistic visuals. However, among the long line of NFS games, the one that takes the top spot among the racing video games is the 2005 racing game by Electronic Arts, Need For Speed: Most Wanted. Further, the game is about racing excellent and fast cars on the streets. It also has a phenomenal storyline where the players take on the role of a street racer in the fictional city, Rockport. He must compete against the city’s 15 most elite street racers to become the most wanted racer of the group. Further, the player also seeks revenge against the leader of this group of elite drivers who took the player’s car in the beginning.

The Classic has to be one of the best racing games to ever exist. There are many installments, but the 1994 one is the most iconic among the Road Rash series. Because it changed the genre of racing and introduced many new features. Road Rash has been one of the few games to feature bikes instead of cars. In this game, the player races through five different streets, which take place at locations like San Francisco, the Sierra Nevada, Napa Valley, and the Pacific Coast Highway. The player will race against fourteen other racers on these locations while finishing in the top three. The iconic factor about this game is the usage of weapons while running. In this game, the players compete against other drivers via bikes and use weapons to defeat the opposition.

This 2011 game is the fifth installment in Ubisoft’s Driver series. It is a racing game, but what makes it unique is the action-adventure genre and the game’s objective. Driver: San Francisco is not a typical racing game where you just race against other cars. Because here, you also complete many objectives besides some fun-time racing to complete the game’s story. This game revolves around FBI agent John Tanner who, after an accident, received the ability to shift to the bodies of other people. He uses this ability to jump into others’ bodies, take on their vehicles, and complete various tasks, including racing to get his hands on the criminal, Charles Jericho. This game’s unique nature helped it become popular among racing video games fans. Therefore, it is one of the best racing games that one should try once.

Besides Formula One, the most famous motorsport has to be NASCAR. Therefore, Sega AM2 director Toshihiro Nagoshi came up with the concept of Daytona USA. Then Sega released the game in 1994, and it became a classic in the arcade racing genre of video games. The game lets the players drive a soap car and compete against 39 other CPU-controlled racers. The player has to finish the race before the time runs out to win the game. This game has three difficulty levels: Beginners, Advanced, and Expert. However, Daytona USA uses the first lap to measure the player’s skill to automatically select the difficulty for the player. The game further features many realistic aspects of racing. So the players might have to use techniques like power sliding and drifting in the game.

Mario is unquestionably one of the most popular video game characters, and kart racing is also a very popular motorsport. Thus, Nintendo fused them both and came up with Mario Kart. We can see many famous characters from the Mario universe, including the short Italian plumber Mario, driving go-karts and racing against each other. Mario Kart 8 is the eighth and latest installment in the Mario Kart series. Nintendo made this game for their Wii U consoles. However, the Japanese developers later released an enhanced version called Mario Kart 8 Deluxe for their latest console, Nintendo Switch, in April 2017. The game is one of the best racing games. Therefore, racing game fanatics should play Mario Kart 8 Deluxe.

Xbox Game Studio’s Forza series has to be one of the most famous racing game series of the present times. Forza Horizon 5 is the latest and fifth installment in the Forza Horizon series, which came out in 2021. This game became one of the best racing games that one should definitely try. The game is set in an open-world setting in Mexico. The developers claimed the Forza Horizon 5 is the largest and most diverse map so far in the series. Also, players can customize their character and car. Further, they have a wide variety of 500 licensed vehicles to use in the game. In addition, the players can race against CPU-controlled racers or other players in multiplayer mode. Further, the players can also explore the vast map in the game. Because of so many features, Forza Horizon 5 bagged the Best Racing Game award at the Game Awards 2021.

This racing game is said to be one of the best racing games and one of the best-selling video games. Polyphony Digital developed this game for the Sony Playstation 2. After the release in 2001. It became a massive hit among the fans of racing games. Further, featured many quests like races, championships, and license tests. The players must finish all the searches for the 100% completion of Gran Turismo 3: A-Spec. The fans praised the game because of the graphics, which were very advanced for that time. However, GT3 has fewer cars than in past installments because the developers were more focused on the visuals. The game featured both licensed and unlicensed counterparts. The game also has hidden vehicles that are only accessible via cheats. Although, the game itself provides new cars to the players after completing every 25 percent of this game.

Electronic Arts have undoubtedly dominated the racing genre. Because they have so many racing series like the Need For Speed, F1, and Burnout. The Burnout series has to be one of the most popular EA games, especially the third installment. The Burnout 3: Takedown was like a revolution in the racing genre in 2004. It became the first game to introduce taking down opponents’ cars and the developers, Criterion Games, called this feature Takedown. In this game, the players participate in various races and game modes to unlock new and faster cars and complete the game. Burnout 3: Takedown received praises from the experts for aggressive game style and visuals. Therefore, it won various awards, including three BAFTA awards.

Also Read: Can You Play Forza Horizon 5 In Split Screen?

Will Spike Spiegel Die In Cowboy Bebop? The Fate Of The Former Member Of Red Dragon Syndicate

The Elder Scrolls 6: Will it Be Xbox Exclusive?