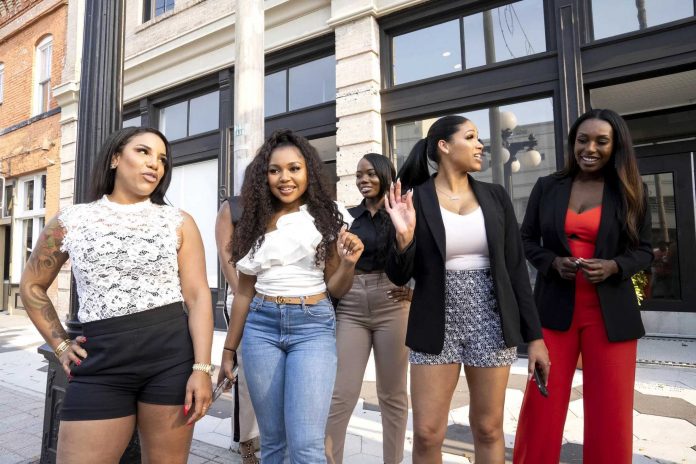 Reality shows are a big challenge to the industry as it shows real-life instead of the reel. Selling Tampa is one of the most successful reality shows in recent years. Its first season was once one of the top ten trending shows on the streaming platform Netflix. And now, people are expecting the same from Selling Tampa Season 2. Yes, the show is soon going to renew on the same OTT platform with many new twists.

Are you interested in properties and real-estate-related stuff? If yes, then you would surely love this series. This show basically focuses on the real-estate firm, agents, and dealings. The highly skilled and ambitious ladies in the show inspire us. Also, watching the series gifts us with so many beautiful visions and scenes as the filming locations of Selling Tampa are amazingly adorable.

People are really curious to know when will Selling Tampa Season 2 premiere. But there is no news about the date of renewal of the show. It means the release date of this upcoming installment is yet to be announced. However, the first season of the series aired in the middle of December 2021, which suggests that the 2nd season might arrive this year i.e. in 2022. Netflix might renew Selling Tampa in December 2022 or maybe even sooner. You can watch the episodes on Netflix as soon as they release.

Due to the worldwide pandemic in recent years i.e. COVID-19, many shows and movies are highly affected. There are many delays in the new releases. Its sister show, Selling Sunset, renewed its season very recently. It increases our expectations to watch the new episodes of Selling Tampa also very soon. But here is a piece of bad news for you all, even the trailer of Selling Tampa Season 2 is not out yet. We have to wait a little more to watch the glimpse of its new season.

Selling Tampa is a very famous television reality series. We have already witnessed this show’s first installment and are now waiting for the second one. The show premiered all the first season episodes together on 15th December 2021 on the streaming platform Netflix. It is an English language series that originated in the United States. There are eight episodes in the first season of the show, with a running time of 45 minutes for each one.

Selling Tampa revolves around the all-black fun-loving and ambitious females real estate firm, Allure Realty firm in Florida, ruling the waterfront of a hot Tampa luxury real estate marketing. Sherelle, the owner of Allure Realty firm, was pregnant, and her husband Johnson used to live in Miami. Although she has big dreams and huge plans for brokerages that she wants to fulfill. All the ambitious ladies on the set enhanced the quality of the deals and also increased the fun over there in the first season. Their personal lives added a delicious topping to the show, along with the skilled professional real estate brokerages.

All the eight episodes had different titles according to the contents, and those titles include Closing Deals in Heels; Going for Brokerage; Dollar Short, Day Late; When Agents Collide; What Happens in Miami; There is No Competition; Tough Choices, New Chances; Here Today, Gone Tomorrow. All the agents, with their unique skills and abilities, did the dealings. Also, the season contained various secrets, fights, team-ups, as well as confessions.

As the name of the series suggests, the show is majority shot in the Tampa Bay region i.e. the region where Allure Realty firm and its agents are based. Also, the very beautiful location, Miami, also appears in the episodes. The Tampa Bay region is also the economic center of West Florida as it has luxury estates that attract tourists towards it.

Allure Realty firm is present at 1315 East 7th Avenue, Suite 105 in Tampa. Also along with the office, the filming locations include some cafes, stores, parks, etc in the Tampa Bay area. In Miami, the SLS South Beach Hotel, Mayami Mexicantina and Bar, and many more beautiful places of the magic city are featured in Selling Tampa season 1.

The cast of Selling Tampa

The group of wonderful ladies in the first season of Selling Tampa includes:

Sharelle is the owner of the Allure Realty firm. Her past experiences involve her work for the army and in human resources. She is expecting her fourth child with the former NFL wide receiver Chad Johnson.

Alexis C Williams is an expert in listing and selling residential houses with her fantastic negotiating and marketing strategies. She is a full-time real estate agent.

Anne-Sophie Petit-Frere was actually a property accountant and is now a brilliant real estate professional. She has also received the credit of Top Agent many a time.

Colony Reeves is one of the very famous real estate industrialists in Tampa. Her specialization includes wealth building and homeownership.

Juawana Colbert-Williams gained her skills and passion for the property when her grandfather used to bring her for his apartments’ inspections. She is an executive in Economic Development.

During selling cars with her father’s dealership, Karla Giorgio developed her skills as a real estate agent and then got her license of it.

Rena Frazier is a civil and environmental engineer by qualification, after which she attained a law degree as well. She works as a broker associate at Allure Realty firm.

Tennille Moore was the Chief Legislative Assistant in the Florida Senate. She is a mother of three and knows how to grow the business on multiple levels.

What to expect from the second season?

Through the first season of Selling Tampa, we have some expectations from Selling Tampa Season 2. As Sharelle was pregnant and her fiancee johnson used to live 280 miles away from her in Miami, the new episodes might show some complications or fights between both of them. Also, there can be a few challenges in the Miami branch. Although, it totally depends upon the show-makers what twists and turns they want to bring in the second part to increase our interest.

If we talk about the cast of Selling Tampa Season 2, most probably, Sharelle Rosado will continue the center stage again. Although, her pregnancy will affect some aspects like the scheduling. No official announcements are there, thus, we can not confirm anything and just give the predictions about who all will be there.

Also, other star casts Anne-Sophie Petit, Karla Giorgio, Tennille Moore, Colony Reeves, and Juawana Williams, might continue their presence in the series. But Alexis Williams and Rena Frazier may discontinue due to the issues they created in the first installment. There also might be some new faces in the new season.