The Sharingan eye is the genetic birth right of the Uchiha clan, although it can be transferred. Only intense emotions and tragic experiences can awaken its power. 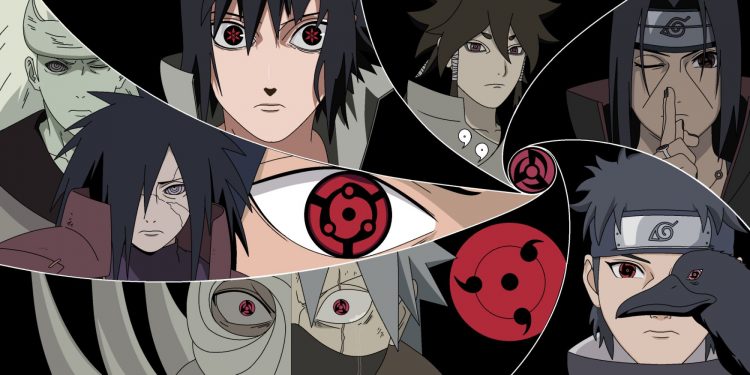 The Sharingan eye is the Dojutsu Kekkei Genkai of the Uchiha clan, which appears in a select few of its members. It is one of the “three great Dojutsu,” the other two being the Byakugan and the Rinnegan. The Sharingan, literally translated, means the copy wheel eye. The Sharingan technique makes one awaken powers with the pupils turning red with black comma-like patterns within them. It helps the user move faster, more fluid, copy and understand other’s techniques better. Although its powers originated from Kaguya Otsutsuki’s Rinne Sharingan, its independent form was first manifested by Hagoronmo Otsutsuku in the anime.

This eye technique manifests itself in individuals in many different ways in Naruto. Its powers can differ from user to user. The Sharingan grants the user two broad abilities, i.e., The eye of Insight and The eye of Hypnotism. The Sharingan wielder can then modify these powers according to his knowledge and capacities. They can now see chakra flow through any obstructions, perform mind-controlling Genjutsu, time and space bending Dojutsu as well as form the powerful Susanoo. However, some of these attacks can only be performed when the user transforms their eyes into the Mangekyou Sharingan.

Now, although the Uchiha clan members all have the Sharingan eyes genetically, they still need to activate it themselves. Only then can they access its limitless powers. So here are the top 10 ways our favorite characters in Naruto have awakened their Sharingan eyes!

Sasuke, one of our protagonists, awakened his Sharingan when his entire family was slaughtered before his very eyes. That fated night, Itachi Uchiha murdered his entire family except for his little brother Sasuke. This caused so much emotional pain within Sasuke that it awakened his Sharingan eyes, but he passed out shortly after that. This sets him out on a path of revenge against his brother. Sasuke later gets the Mangekyou Sharingan after witnessing his brother’s death. However, after extensive use, he was going blind. So, he transplanted Itachi’s Eternal Mangekyou Sharingan’s eyes on himself to prevent blindness.

Also Read: How Strong is Eida in Boruto: Naruto Next Generations? Is She Stronger than Naruto?

This only happened once within the Naruto/Boruto universe with Sarada Uchiha. When Sasuke, her dad, came back to Konohagakure after a long time, she became super excited. So happy, in fact, that it awakened her latent Sharingan eyes. This was a huge exception as until then, only negative emotions were strong enough to awaken the Sharingan in the story.  But Sarada proves that wrong.

3. Just be a Celestial Being

Obviously, this method can only apply to the goddess mother of the Naruto Shinobi world, Kaguya Otsutsuki. She is one of the most powerful beings in all of existence. When she arrived, she already had a Rinne Sharingan eye on her forehead, which we can deduce is a result of her status as a celestial being. Since this power is genetic, her children and their children were able to use the power of the Sharingan, Byakugan, and the Rinnegan.

Now, this has happened quite a few times in Naruto. But the most well-known case is that of the copy ninja, Kakashi Hatake. Obito Uchiha gifted his Sharingan eye to his teammate, Kakashi, after he had lost one of his own eyes. Later on, Obito granted a second Sharingan eye to him, which had the Mangekyou Sharingan already awakened.

5. Getting experimented on by Orochimaru

Shin Uchiha was the test subject of Orochimaru. Orochimaru had Mangekyou Sharingan eyes implanted all over his Body as an experiment. Shin later came to love his gifted Body and even started referring to himself as an Uchiha. He wanted to unite a new Akatsuki team, but he died at the hands of his own clones.

Orochimaru had done another similar experiment. He was seen implanting a Sharingan eye in the eye socket of Shijima, a bodyguard of Hakuto in “Gaara Hidden: A Sandstorm Mirage.”

This incident only happened once in the anime. Black Zetsu absorbed Obito Uchiha when he died. He then gave Obito’s Rinnegan eye to Madara Uchiha and kept the Sharingan eye for himself. Later on, Black Zetsu tried to do the same thing with Naruto and Sasuke, but his plans were short-lived. He was imprisoned inside the moon along with Kaguya Otsutsuki.

This way is not exactly a ‘true’ Sharingan awakening, similar to Black Zetsu. But it does grant the user the same powers of a Sharingan. Danzo Shimura, former head of the Anbu and the main antagonist behind the execution of the Uchihas, tried this method.

He spent years trying to steal more Sharingan eyes from the Uchiha clan and implant them all over his Body. However, he kept them hidden under bandages. In his last battle, he unleashed the full power of his body amputations but got killed by Sasuke.

8. Feeling the desire to save a loved one

A common way to awaken the Sharingan is when a character feels any extreme emotions. In this case, Obito Uchiha felt the fear of losing his teammates when he saw Kakashi getting wounded badly.  Obito wanted to save them from any danger. He awakened his Sharingan to protect his team from the attacking Iwagakure shinobi.

Similarly, Indra Otsutsuki’s Sharingan Eye awakened after saving his younger brother Asura’s life. Though this was after the fact and not vital in saving Asura, the sentiment is similar.

9. Witnessing the death of family and teammates

This is the most common method for Uchiha clan members as they always seem to be around dangerous situations. Itachi Uchiha awakened his Sharingan when he saw his team and best friend, Tenma Izumo, get killed by Tobi. He also had to witness the death of most of his family, except his brother—similarly, Hagoromo got his Sharingan eye after witnessing the death of Haori.  Itachi, Sasuke, Shisui, and Obito also awakened their Mangekyou Sharingan in the same way.

10. Just be Negative and Ominous

Honestly, this can be said about almost every Uchiha member as all of them awakened their Sharingan through negative emotions except Sarada. Since tragedy seems to follow the Uchiha clan, they are usually always angry, ominous or brooding.

However, Madara Uchiha and his brother Izuna are those rare cases whose origins we don’t know much of. Madara Uchiha was the one controlling Tobi and most of the Akatsuki members in the anime. Even Shisui Uchiha and Fugaku Uchiha’s Sharingan awakening is shrouded in mystery as well.

Where to Watch Naruto?

You can easily watch all the episodes of Naruto on Hulu, Netflix, or Crunchyroll.