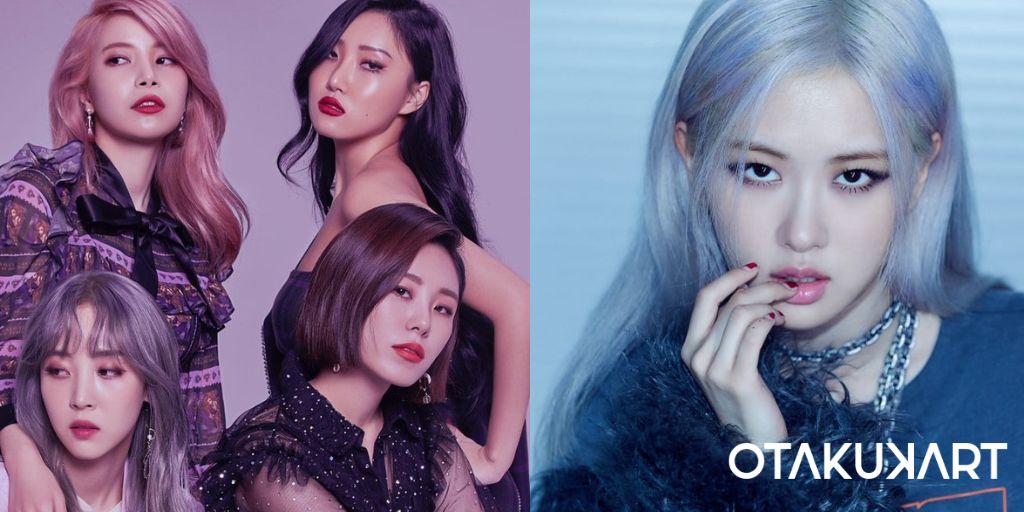 As we enter the pride month of 2022, let us check out some Kpop idols showing off pride flags that melted everyone’s hearts. The LGBTQ+ community has come a long way to achieving acceptance and equality in society right now. But even now, many people of this community face a lot of inequality in many places. We can even see that many places consider talking about LGBTQ+ a taboo. But the time has come when the world truly views all humans as equals and treats each and everyone with dignity and respect. We know this will not happen overnight, but even if we take slow yet steady steps towards this cause, change is definitely bound to happen in the world.

From Mamamoo to Red Velvet, we can see many Kpop idols speaking up for the support of the LGBTQ+ community. Even if they don’t speak out loud, they do not miss out to show their support through their actions, and as the saying goes, action speaks louder than words. When RM said in his speech at the United Nations, “No matter where you’re from, skin color, gender identity, just speak for yourself”, we all felt it in our hearts, and the LGBTQ+ especially responded very positively. As we know that Kpop idols are icons or models for many youths and younger generations all over the world, and the way they have taken steps to be great models for all of them is commendable. So let us check out some heartwarming moments of Kpop idols showing off pride flags that make us proud being a Kpop stan.

Here Are Some Kpop Idols Showing Off Pride Flags:

When Rosé of Blackpink waved the Pride flag on-screen

This is not a surprise to us that all the members of Blackpink keep showing their support to the LGBTQ+ community in many ways but a moment that stole our hearts was when the group was in the Philippines concert. A fan threw a Pride flag on the stage, and our Rosé happily picked it up and waved the beautiful flag on-screen, showing her full-hearted support. Thus, she is one of the Kpop idols who showed off pride flags. She also received huge appreciation from LGBTQ+ fans as they were highly touched by her support. 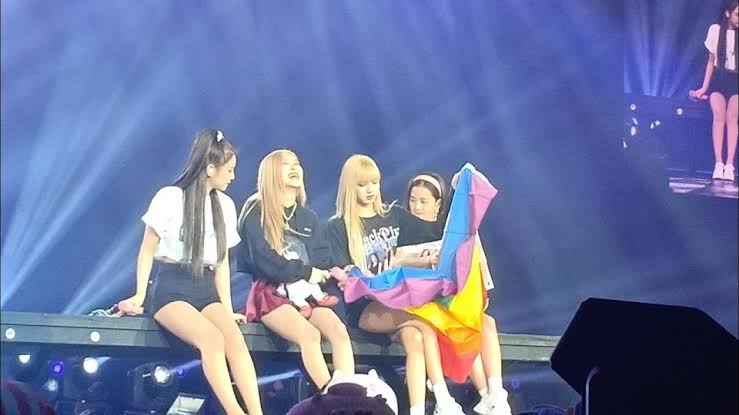 Blackpink with the Pride flag

Yeri of Red Velvet Cutely Wrapped Up In The Pride Flag

Next in the list of Kpop idols showing off pride flags is Yeri of Red Velvet. This has to be one of the most heartwarming moments for the LGBTQ+ Kpop fans as Yeri openly showed her love for the community in the Redmare concert in LA. Fans gave her a big Pride flag, and what she did with it truly blew our minds with happiness. She wrapped herself with the whole flag. But this is not it, as when a fan talked about the moment during a fan sign, she admitted that for her, holding the flag was a very special moment that she will never forget. 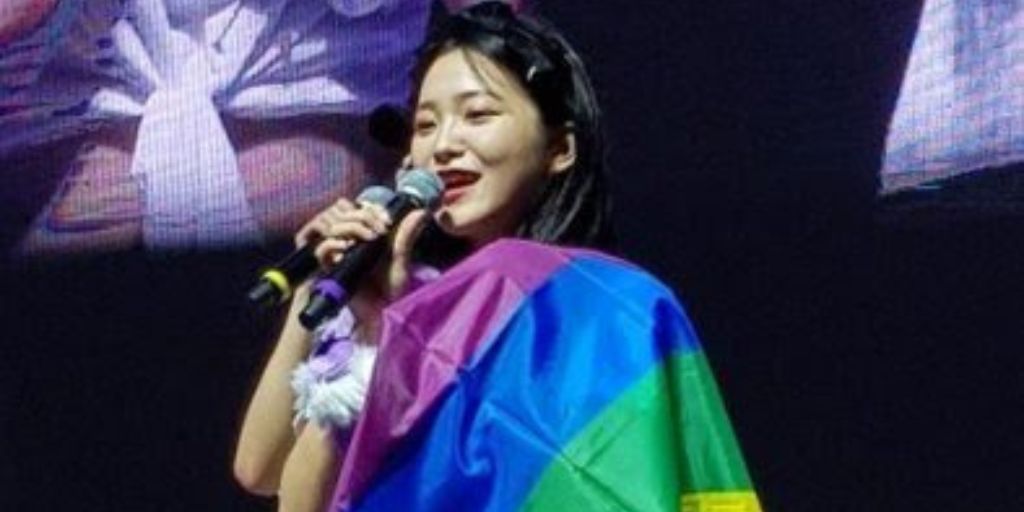 When Jackson of GOT7 Accepted A Pride Flag

Well, the concerts are surely a big event that brings the fans closer to their favorite groups, as idols can show their love more openly to the fans. Jackson is no exception as he happily accepted a Pride flag when an Aghase (GOT7’s fandom name) threw it at the stage. 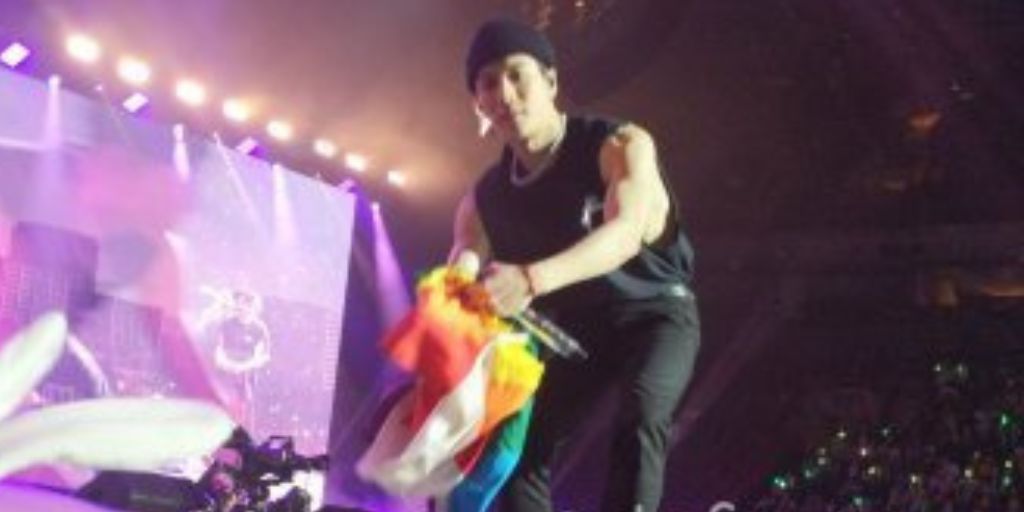 Sunmi Wishing ‘Happy Pride’ To Her Fan At A Concert

This moment went viral on the internet as Sunmi the Queen has melted everyone’s heart. During her world tour ‘Danger’, Sunmi saw a fan holding a Pride flag and reached out to the fan, grabbed the flag, and wished “Happy Pride”, which made the whole crowd cheer and applaud. She also said that she has many sides to herself, like dorky and LGBT queen. Some fans think this might be her way of coming out, but other fans think that is her beautiful way of showing her support for the community. She is one of the most vocal idols in the list of Kpop idols showing off pride flags 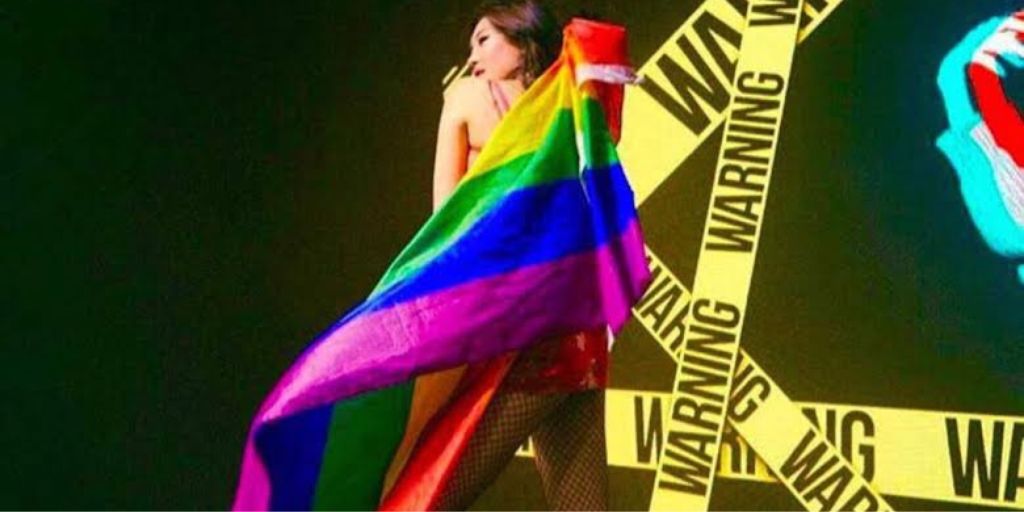 Mamamoo Posing With Fans Along With Their Pride Flag

These queens never cease to make us fall in love with them, and we knew they were coming in this list of Kpop idols showing off pride flags. Members of Mamamoo have always shown their support for the LGBTQ+ community. One such beautiful moment was when they clicked a photo with their fans along with their Pride flag. The group has always shown respect towards the community and is again one of the most vocal idols who show their support for the community. 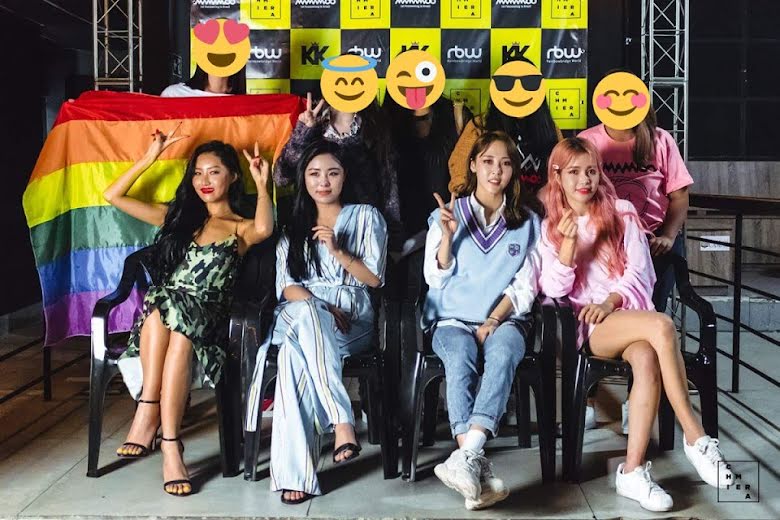 Also Read: All The Male K-pop Idols Who Have Proven That They Are Big LGBTQ Supporters