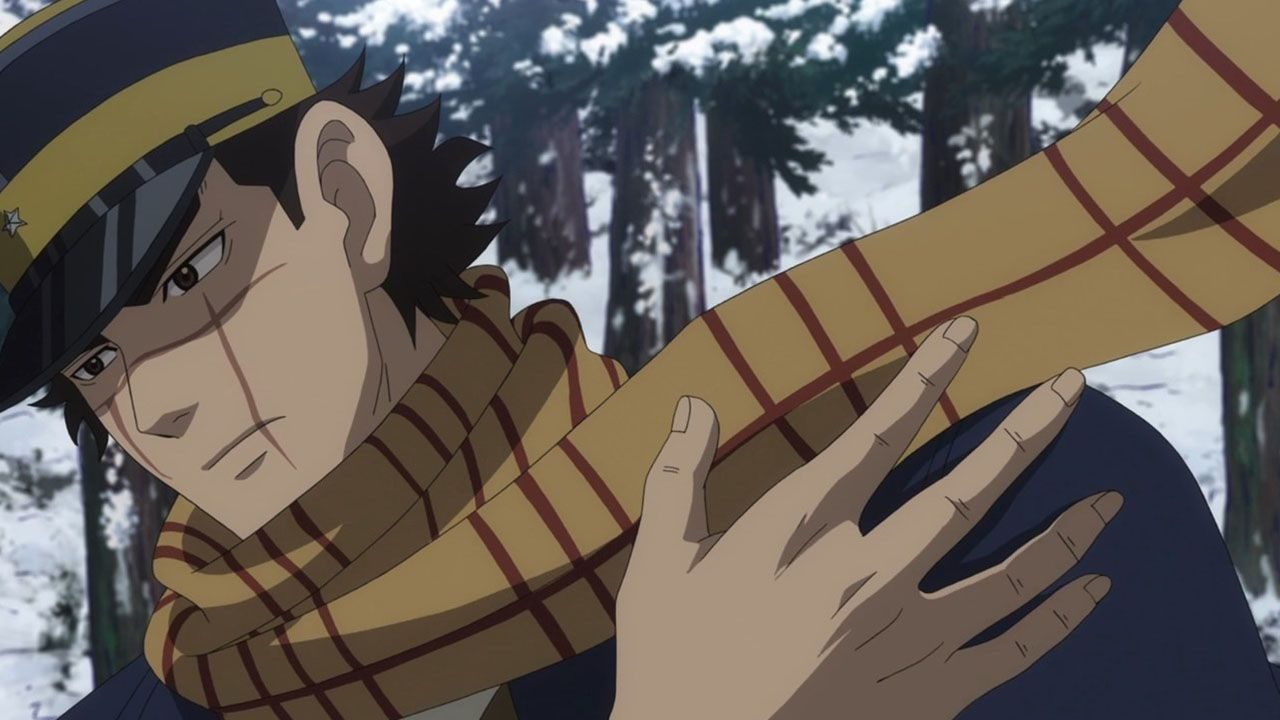 Treasure hunting is indeed an interesting concept for a story but not many do it right. However, Golden Kamuy is an epitome of brilliancy as it builds itself one of the best and most hyped treasure hunting plots ever. Through its ever-growing characters, Satoru Noda developed a brilliant mystery manga. The journey was indeed glorious while it lasted but now the manga is closing into its end. Golden Kamuy Manga is going to conclude by the end of April 2022. The treasure to very close to discovery, bringing our right years of journey with Asirpa, Sugimoto, and Tsukishima to an end. As far as reality-driven adventures are concerned, Golden Kamuy exhibits it with near perfection.

Satoru Noda launched the manga in Young Jump Comics in 2014. 28 volumes have been published so far by Shueisha, each building up the stage for the grand finale. An anime adaptation by Geno Studio was released in 2018 which was followed by two more seasons and four OVAs. Season 4 of Golden Kamuy from Brain’s Base is scheduled to be released in October 2022.

What makes Golden Kamuy so catchy is not only its juicy mystery but the way Noda has mixed real elements with fiction. The story is set amidst actual political, technological, and cultural developments that took place after the Russo-Japanese War. This makes the fictional story even more believable and the thrill ten times more impactful. Furthermore, Noda has also introduced several characters based on real-life people that give an in-depth vision of the story. This is further added on by the inclusion of various intense ethical themes including survivor’s guilt, regret, repentance, and honor.

Popular manga Golden Kamuy will reach its final chapter in the 22 & 23 merger issue of the serialized magazine “Weekly Young Jump” which will be released on the 28th. From the start of the serialization in August 2014, the curtain will fall after eight successful years of serialization. Volume 31 of the manga will be published by Shueisha in July 2022. According to reports, Golden Kamuy has secured a cumulative sale of 19 million copies worldwide. 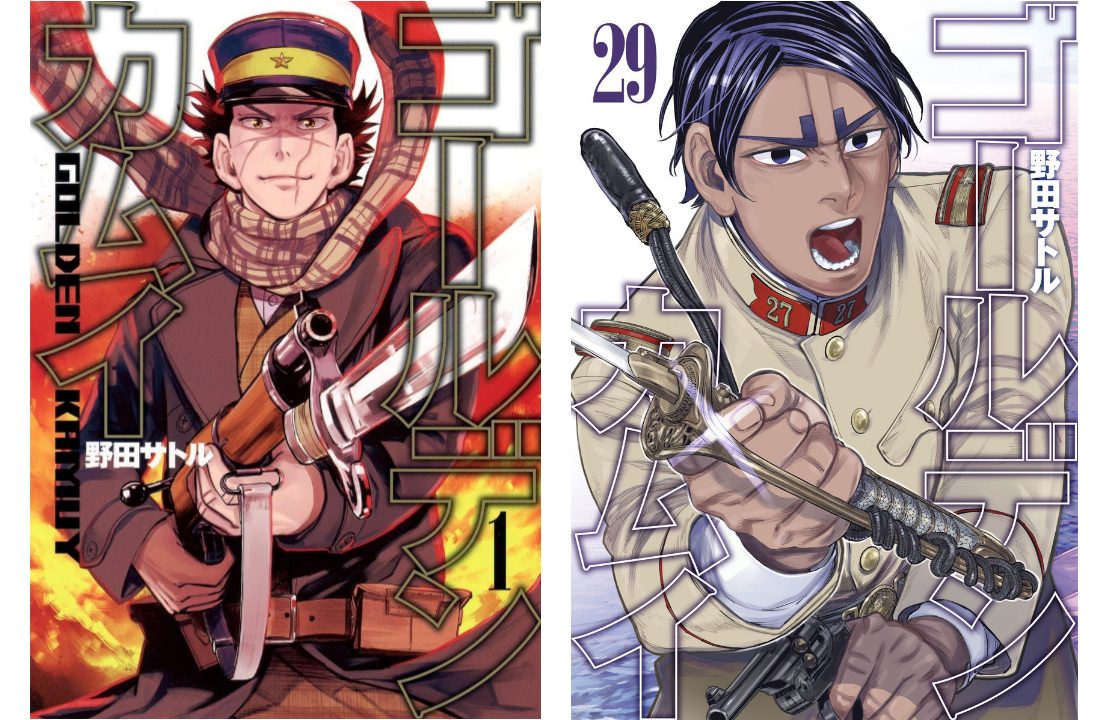 The last and ongoing arc of Golden Kamuy is titled the “Hakodate Arc” which started with chapter 280. Chapter 311 was released on March 31, 2022. New chapters of the manga are released every two weeks. Chapter 312 will be released on 14 April 2022. This will be followed by the release of the last chapter on 28 April in Young Jump issue #21.

To commemorate the conclusion of the series, all chapters have been made available for reading on the official website of Young Jump. Satoru Noda released an official comment where he expresses his confidence in his manga that he believes it is so good that readers would want to purchase the manga to read it again after reading it for free. 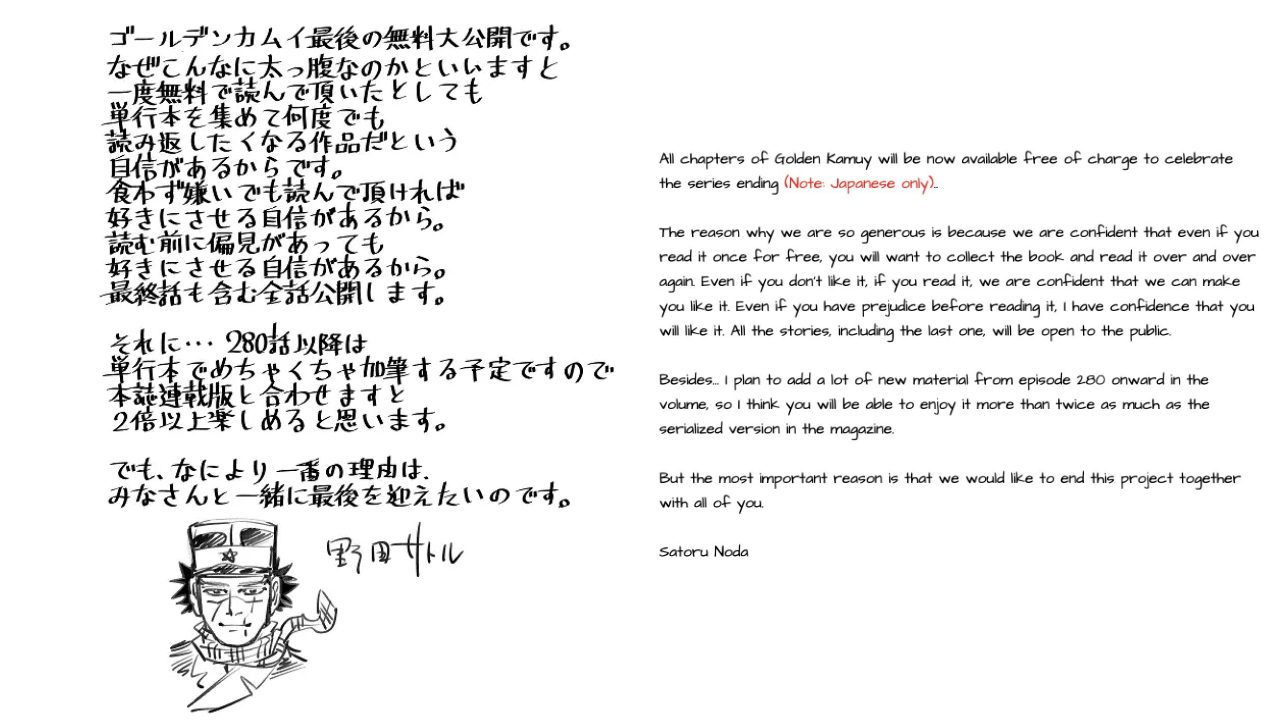 Golden Kamuy is set in Hokkaido in a post-Russo-Japanese War timeline. According to rumors, a group of Ainu miners discovered 20 Kan of gold. However, one of the men murdered the others and hid the gold only to be caught by the Japanese government. Although the government claims to have executed him, the truth is that he was interrogated through brutal means to reveal the location of the gold in Abashiri Prison. Here, he hid the map to the gold’s location as tattoos inked on the prisoners.

Only if all these tattoos are brought together, the true location can be revealed. Although the authorities find out about this, they are unable to read the ciphered map. So they decide to move the prisoners only to be killed by the prisoners as they escape.

Sugimoto, a veteran meets with a drunkard who tells him the infamous story of the Abashiri Prison incident. Once the man sobers up, he tries to kill Sugimoto for ‘knowing too much’. Sugimoto not only saves himself but also attacks the intruder. Chasing after the criminal, Sugimoto enters the woods where he finds him killed by a bear. However, what surprises Sugimoto is to find the back, chest, and shoulders of the man tattoed with the map confirming the legitimacy of the rumored tale of Abashiri Prison. Sugimoto is saved from the bear by Asirpa, an Ainu girl who also happens to be the daughter of one of the miners who was murdered by the survivor.

Sugimoto takes in a group of remarkable individuals; an Ainu girl seeking revenge, an escape artist– to look for all the clues that lead to the gold.

Also Read: When Can We Expect Golden Kamuy Season 4 To Release?