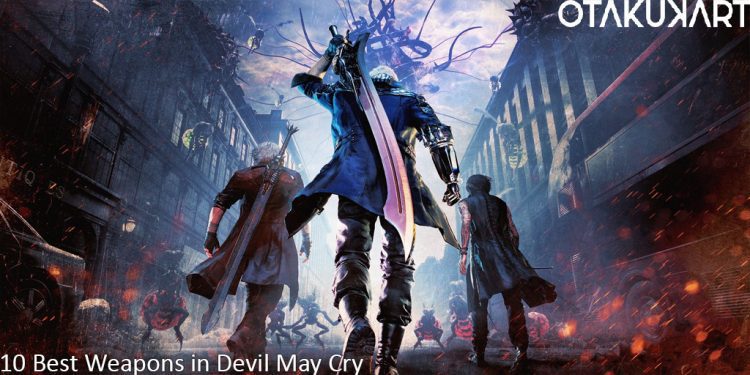 The franchise is known for Dante, a devil hunter and the son of devil Sparda, who is a rash and bad-mouthing guy who works to protect the realm of humans from the demon realm. The game has cool action sequences, which make the gameplay very fun. The series has won several awards and is also one of the best-selling game franchises in the world, selling over 20 million units. Capcom has confirmed that each game in the franchise is a Platinum title.

The iconic weapons of Dante, Ivory & Ebony are must weapons in this list. The guns are semi-automatic firing pistols and are personally modified weapons of Dante. Dante has custom-modified Ebony for long-distance and comfort while Ivory for faster draw times and rapid-fire.

These guns appear in all the Devil May Cry games, including the reboot game, DmC. The best thing you can do with these beauties is to keep the enemy away from you wherever you want, even if that is in mid-air.

This devil arm, or more like a devil briefcase, has 666 different forms. Out of six hundred plus forms built inside it, the players have access to only seven of them. The Pandora has a disaster gauge, which amplifies the ammo damage, determines the quantity of ammo.

The seven forms accessible are -its Base form, Epidemic – a double-barrel rocket launcher, Hatred – a triple-barrel rocket launcher, Revenge – a laser cannon with a steampunk-ish design, Jealousy – a six barreled Gatling gun, Argument – a vehicle like a form with a thruster on the back, and rocket barrels all around the user, Grief – a triple blade shuriken. A deadly weapon with many deadly combos.

King Cerberus is a weapon form of demon King Cerberus which has the powers of ice, lightning, and fire. The weapon can transform into three different weapons, the Nunchaku, a bō staff, and a three-section-staff. Dante acquired this in Devil May Cry 5.

King Cerberus’s attacks are based on stance. Ice power has rapid attacks in short-range, lightning power has long-range attacks imbued, the firepower has mid-range attacks fights with good damage. King Cereberus had more aerial attacks, which the predecessor lacked.

The trademark sword of Nero, the Red Queen. He has heavily modified this sword. The players first saw this sword in Devil May cry 4, along with his owners’ introduction.

The Red Queen has Exceed system, which works like a revving motorcycle. This Exceed can increase the damage of the weapon along with the range, but the charge is slow. The Red Queen can deliver some unique and dangerous attacks to the enemy with or without the Exceed system.

The gauntlets had to appear on this list. This gauntlet originated from the demon of the same name and appeared in Devil May Cry 3. Both the brothers, Vergil and Dante, have used this.

Though it is a close combat weapon, the wearer of Beowulf has their attack damage and speed amplified significantly. In Devil May Cry 5, Vergil can charge and slam Beowulf to the ground, which explodes in a large Area-of-Effect.

Another gauntlet but stronger than the previous one, Balrog. First appearing in Devil May Cry 5, Dante got this after killing the demon of the same name.

What makes Balrog above Beowulf is that Balrog has both complete attacks set for Dante, the punch and the kicks. The Balrog has the close but devastating attacks for close range. And the kick moves are classy and devastating as well.

The Trademark magic sword of Dante, Rebellion, had its first appearance in Devil May Cry 2. It is a keepsake from his father, Sparda. The Rebellion can unify the man and devil together.

Though the sword looks kind of simple, do not underestimate this sword. The power of devil knight Sparda flows into this sword, meaning, with great speed attack, it also hits slow damaging attacks, and with each new game since DMC 2, the moveset has only evolved for this sword.

A weapon was only seen in one game of the franchise but left a huge impact on the fandom, the living sword Alastor. It is the second sword that Dante found in the original Devil May Cry. This sword chooses its wielder, who is the “Chosen One.”

The owner of this weapon gets lightning abilities and can fight mid-air. This sword allowed Dante to use Devil Trigger. It is even faster than the Yamato, katana of Vergil. The attacks are very damaging and, with that, Alastor has a large amount of moveset.

Yamato is the dark and classic katana appearing since the beginning of the franchise and trademark weapon of Vergil. This sword has a legendary story as it was once wielded by none other than the devil knight Sparda.

Yamato is one of the dangerous weapons in the Devil May Cry franchise. This katana is the opposite of the Rebellion, meaning it can separate the human and devil halves of an individual. Yamato can cut through anything, and anything means space and time itself. Vergil can use this sword to teleport from one place to other. This alone is dangerous as the user can get behind the enemy and end him on the spot.

At number one place is none other than the ultimate, newly introduced weapon, the Devil Sword Dante. This sword was introduced in Devil May Cry 5 when Dante impaled himself with Rebellion. He absorbed the Rebellion along with Sparda.

Devil Sword Dante’s abilities are still not very clear now, but it made the Devil Trigger of Dante more powerful. It also makes aerial combat common for Dante and introduces new formation attacks which summons red-glowing swords, which enhances Dante’s Ability even further.